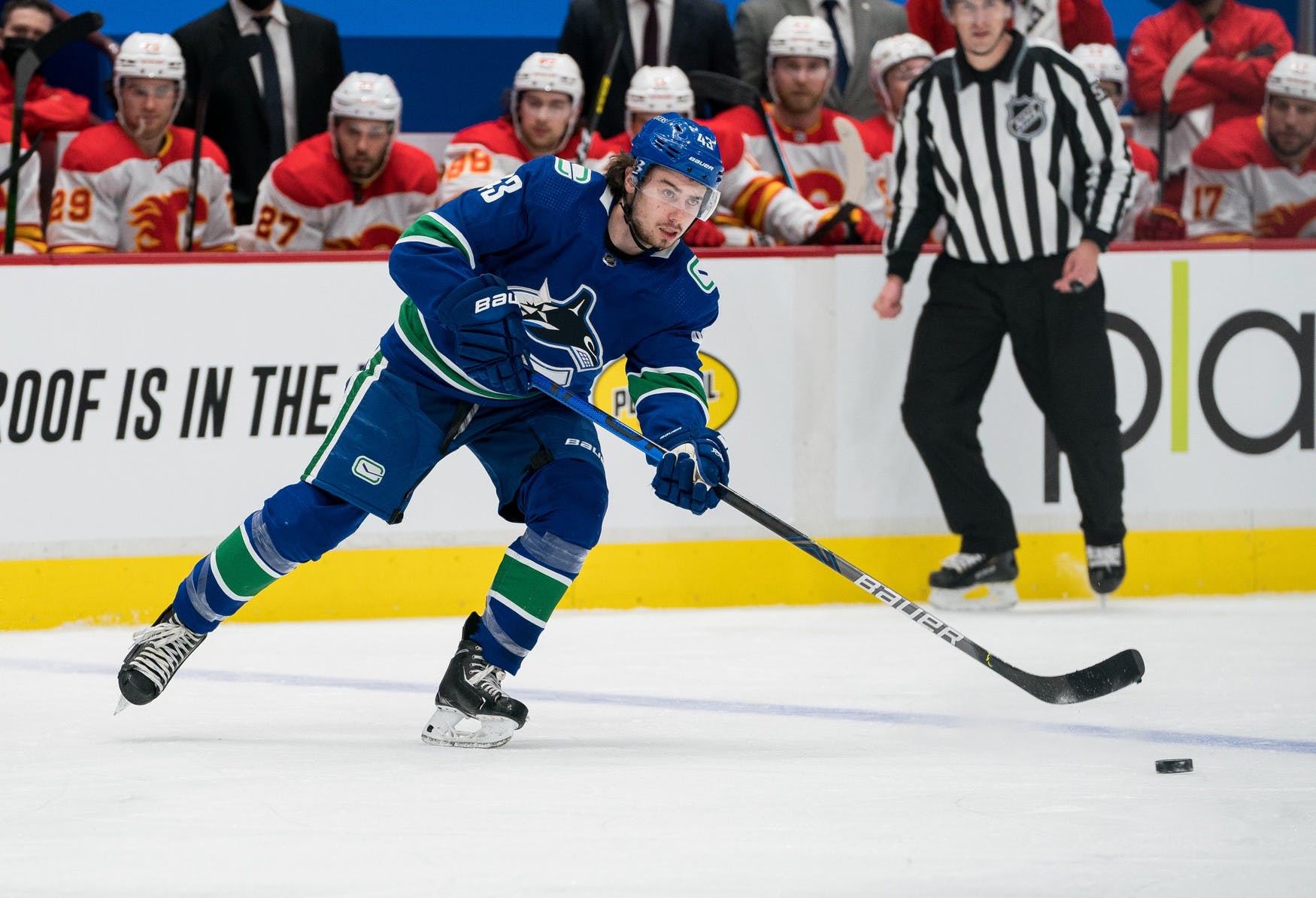 By Stephan Roget
1 year ago
Right here, right now, Quinn Hughes’ perceived value is at an all-time low. He’s (as of this writing) still unsigned, and he’s cold on the heels of particularly porous sophomore slump.
But give it a few weeks, or a few months at most. Definitely give it a year. Because, pretty soon, Hughes is going to come roaring back into the good books of the Vancouver Canucks fandom, and his value isn’t going to be this low again for a long, long time.
What can Hughes do in 2021/22 to remind everyone of why some were ready to crown him as the franchise’s most talented defender of all-time one season into his career?
Well, tightening up those goals against is definitely number one on the list.
But how about breaking the franchise single-season scoring record for defenders for an encore?
If that sounds like a lofty goal to you, it shouldn’t.
And the fact that the record is so feasibly within Hughes’ grasp is, in and of itself, yet another potent reminder of the unique talent that the Canucks have in their hands.
He may not be perfect, but he sure is special.
The record for most points in a single regular season by a Vancouver Canuck is currently held by Doug Lidster, who managed 63 points in 80 games during the 1986/87 season.
That’s a point-per-game rate of 0.79, though someone could get it done with a 0.77 under an 82-game schedule.
Right now, Hughes’ career PPG is 0.75, already just barely off the pace he’d need to score at to break the record.
He dipped down to 0.73 last year as a sophomore — still not that far off the required historical pace — after being at 0.78 as a rookie, a season that netted him 53 points in 68 games and a tie for ninth all-time.
In other words, in order to slide eight spots up the list, Hughes doesn’t even need to replicate the scoring pace he flashed in his first full NHL season. He just has to get close to it again, and that’s very achievable.
In fact, he might just blow right past it.
Hughes will be participating in a generally stronger Canucks offence in 2021/22, one that includes perhaps the best top-six that the organization has thrown together since 2011. During his 20+ minutes of play each night, Hughes will primarily be on the ice alongside Elias Pettersson, Brock Boeser, JT Miller, Bo Horvat, Conor Garland, and Nils Höglander. That alone should guarantee him the sort of scoring clip he needs.
In 2021, Hughes was directly in on 41 of the Canucks’ 148 goals, or roughly 28% percent of them. If the Canucks, as a team, can just get their scoring rate up to last year’s league average of 2.9 goals-per-game, they’ll net about 237 goals over the full 82-game spread. If Hughes chips in on 28% of those, he’ll hit somewhere around 66 points, and have the record.
Motivation-wise, Hughes is coming off the first real adversity of his hockey career. Previously, it had been smooth sailing for him in transitioning from youth hockey to the NCAA and then to the NHL. For the first time in his life, Hughes really has something to prove.
And he’s had the longest offseason of his short NHL career to think about it, and to prepare — distracting contract negotiations aside.
Again, the defensive deficiencies will take precedence there. But given the sort of deployment he’s sure to enjoy, there’s no reason that Hughes’ offence has to take a hit at all as he shores up his play at the other end of the ice. This is a player, after all, who can get from one end of the rink to the other faster than most other players in the history of the sport. Hughes can do both. If the Canucks really want to succeed as a team, he’ll have to.
Are there things that could get in the way of Hughes’ potential record-breaking campaign? Of course. There’s always the spectre of injuries and illnesses. There’s also the slight chance that Oliver Ekman-Larsson and/or Jack Rathbone steals power play minutes from Hughes, though it’s tough to imagine the latter getting bumped all the way off PP1.
And we’ll knock on wood before we say it, but, yeah, there is the slight possibility of a season-opening holdout, which would obviously reduce his chances.
But in all likelihood, Hughes will overcome and avoid those factors, being buoyed by the arrival of more talented teammates instead of hampered.
We’re going to say it one more time. In all likelihood, Hughes breaks the all-time single-season blueline scoring record for this 50+-year-old franchise without breaking much of a sweat.
Perhaps it’s best to take this article less as a not-so-bold prediction, and more as food for thought.
Is Hughes currently pretty bad at preventing goals against? Yes, and that really needs to be addressed as soon as possible. Have faith that they will.
But Hughes is also still pretty good at producing goals for.
How good?
Good enough that no one will be all that surprised if next year, in his third NHL season at the age of 22, he breaks a franchise record that has stood for a quarter-century.
Like we said, food for thought.
Uncategorized
Recent articles from Stephan Roget