Why the Canucks won the Chris Tanev for Travis Hamonic “trade” 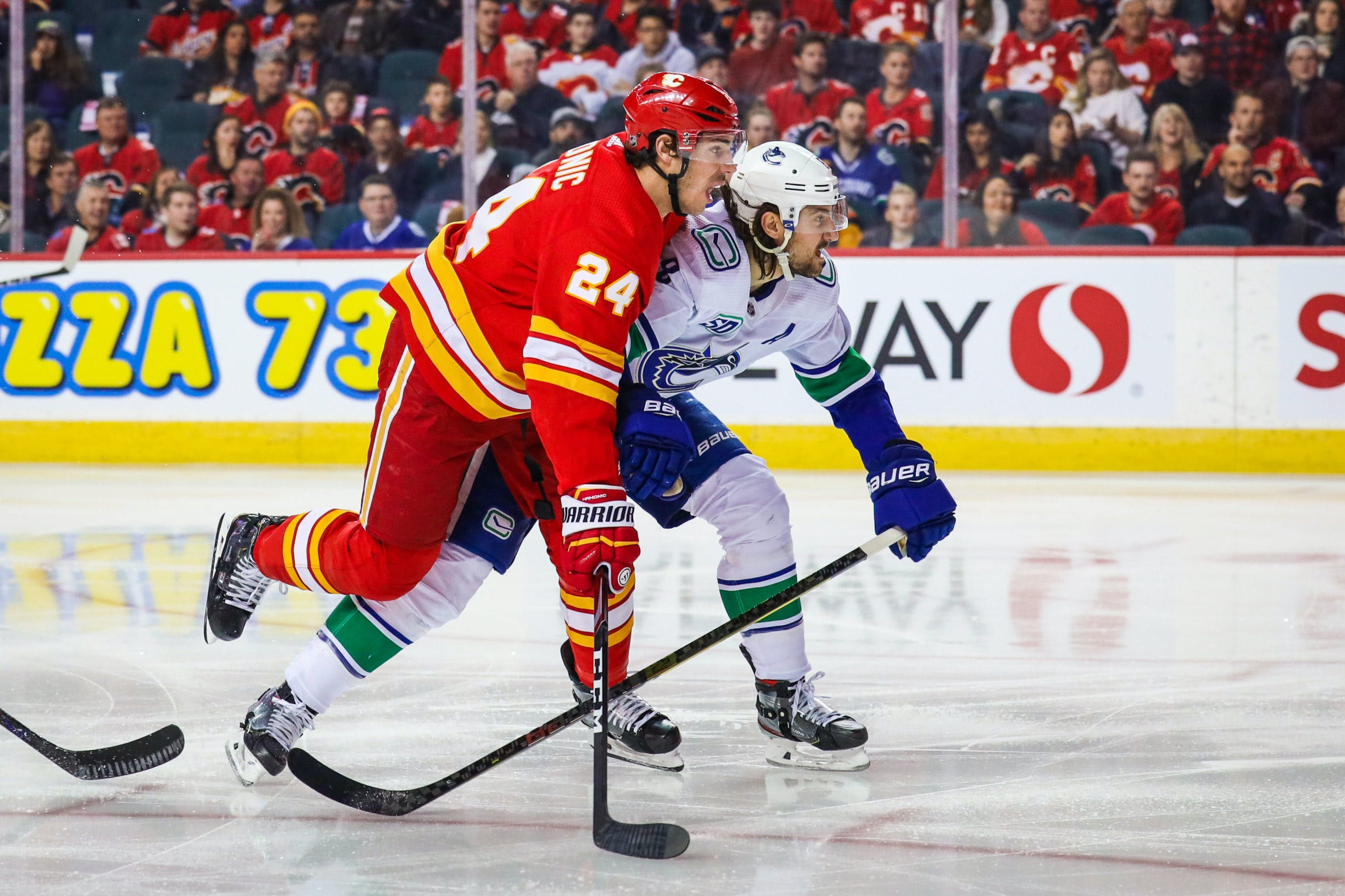 By Stephan Roget
1 year ago
Let’s not beat around the bush. Everyone already knows that Travis Hamonic isn’t really on a professional try out contract, or what we in the biz like to refer to as a “PTO.” Hamonic, like Mike Hoffman before him, is only “trying out” with the Vancouver Canucks until they formally place Micheal Ferland on LTIR and gain the cap space needed to fit Hamonic’s contract. Our very own Chris Faber was one of the first to put word of a handshake agreement on the street, and there haven’t been any conflicting reports yet.
It’s a foregone conclusion that Hamonic will officially join the Canucks within a week of this writing. Speaking of Faber, he’s already gone on record about the ways in which Hamonic improves the overall blueline picture.
But there’s another angle worth exploring here because, in a roundabout way, the Canucks just completed a Chris Tanev-for-Hamonic swap with the Calgary Flames.
And it’s already time for a first look at who won the quote-unquote trade.

Where Tanev is better

Believe it or not, Tanev is currently the better offensive talent of the two. Although Hamonic has the higher career PPG (0.30 to 0.23), Tanev has put up points at a greater pace for the last three seasons running. Last year, Tanev matched a career-high with 20 points in 69 games. Hamonic hasn’t cracked 20 points since leaving Long Island.
As Faber already covered and according to stats from our pals at NaturalStatTrick, Tanev also has a slight advantage in some advanced stat categories, including shot suppression and actual goals against per 60.
At even-strength specifically, Tanev enjoyed superior 2019/20 rates in Expected Goals For and Shots For. 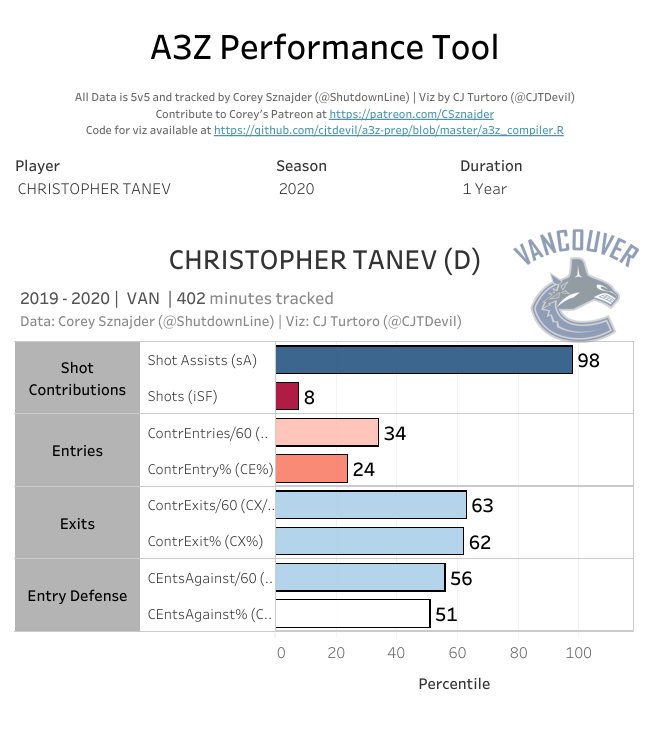 From Corey Sznajder/CJ Turtoro’s A3Z Performance Tool
If you’ll excuse our getting graphic for a moment, Corey Sznajder and CJ Turtoro’s A3Z Performance Tool also hands a couple of wins to Tanev. The former Canuck guards against zone entries at a roughly median rate, whereas Hamonic struggles mightily. Tanev also provides Shot Assists at one of the best rates in the league, while Hamonic is decidedly sub-average. Their Shot rate percentiles are nearly exactly opposite.
Which makes sense, given that Tanev is well-known for lobbing muffins and Hamonic has a cannon of a shot, but more on that in a bit.
There’s also quality of competition to consider. Both Tanev and Hamonic faced tougher minutes than the average defender, but Tanev had one of the toughest deployments in the entire league, constantly matched up against top lines and elite talents. And while that might not explain all the statistical gaps between them, it’s certainly an important context. 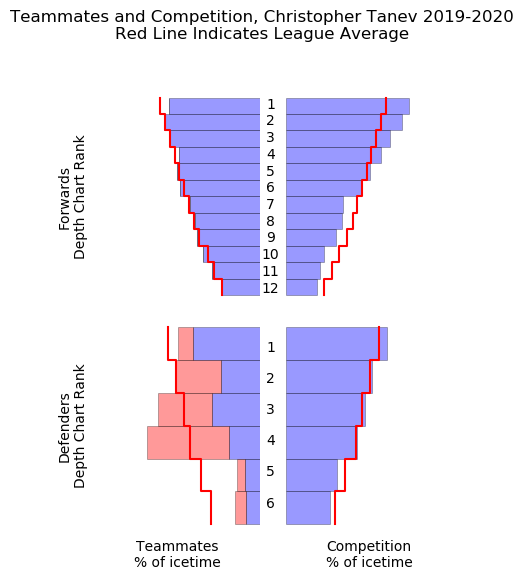 From HockeyViz.com
Switching from tangible to intangible quicker than Kitty Pryde, we’d be remiss if we didn’t mention Tanev’s dad qualities and the important role he played in team culture. The Vancouver fanbase knows well that Tanev’s best qualities don’t always show up on a stat sheet, no matter how advanced.
Here was a player that did the grunt work night-in and night-out for ten seasons without complaint. There’s something to be said about that.

Where Hamonic is better

Well, all the areas we didn’t say Tanev was better in, of course.
More specifically, Faber already covered the myriad statistical categories in which Hamonic has held a recent advantage over Tanev, which is most of them. Hamonic holds the 2019/20 lead in Expected Goals, Scoring Chances, High-Danger Chances, and a massive one in Corsi.
In more basic stats, Hamonic plays more, blocks more, and hits more — though that particular part of his game has slowed way down of late. And, if you’re into that sort of thing, Hamonic definitely fights more.
At five-on-five, Tanev draws closer in most columns, but Hamonic is still ahead, and that’s really just a reflection of Hamonic’s vast superiority on the penalty kill.
Both were top unit PKers for their teams in 2019/20, but Hamonic found far more success. In fact, Hamonic’s shorthanded statline is quite literally twice as good as Tanev’s by most measures. 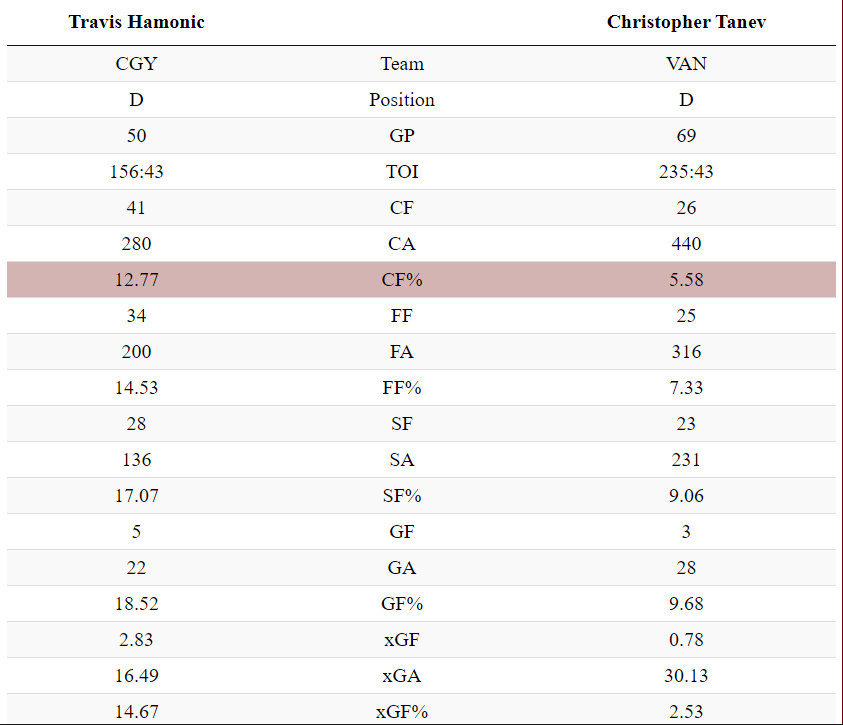 From NaturalStatTrick
True, some of that comes from being part of a better penalty kill in general, as the Flames ranked 8th in 2019/20. But given that Hamonic led the Flames in shorthanded ice-time, it’s also fair to say that he deserves as much credit for their PK prowess as anyone, so it’s a two-way street.
Flipping back to the A3Z, Hamonic proves surprisingly proficient in Controlled Zone Exits, ranking well above average and above Tanev. Neither player excels in Controlled Zone Entries, but again Hamonic has the edge. 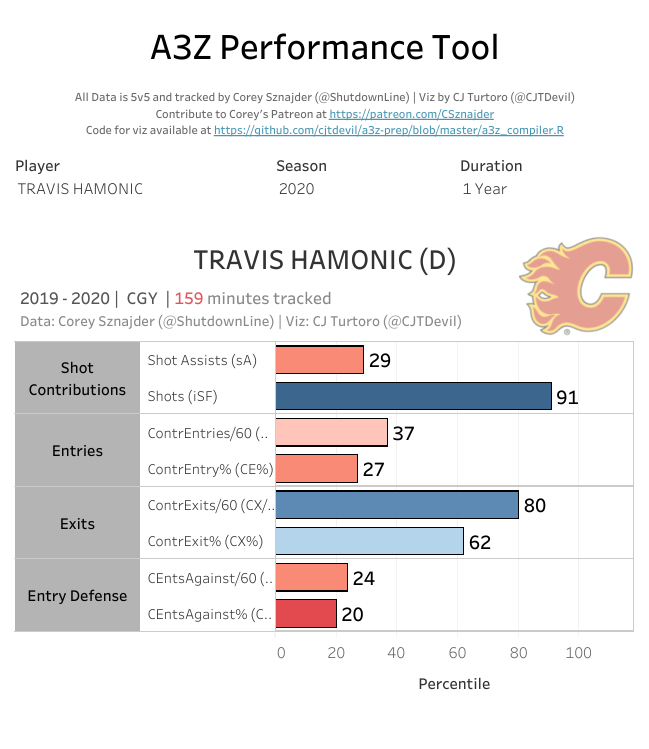 From Corey Sznajder/CJ Turtoro’s A3Z Performance Tool
On that note, we should revisit Hamonic’s shot at this point. He’s not exactly a goal-scoring threat, but he’s much better than Tanev at getting a heavy, rebound-producing shot on net. That should mesh well with the crease-crashers with whom Hamonic is probably going to be sharing most of his ice-time with.
While Tanev has team history on his side, there’s also the matter of team fit. Last season, the Canucks were bogged down by a sub-par penalty kill, and there have been calls for increased physicality from the team in anticipation of the ultra-competitive North Division.
Hamonic just so happens to excel in both those areas of the game.
Lastly, we have to mention that, historically-speaking, Hamonic has stayed healthier — roundhouses from Erik Gudbranson aside.

The Deal-Sealer: Both were overmatched last season, but only one is changing roles

In terms of average ice-time, Hamonic was a top-pairing defender for the Flames in 2019/20, second to only Mark Giordano. Tanev, conversely, ranked sixth on the Canucks, but spent plenty of time alongside Quinn Hughes and faced the toughest competition of any Vancouver defender.
The harsh reality is that BOTH players were at least a little overmatched in the roles they were asked to play last season, but that’s actually great news for the Canucks.
Hamonic will be signed for a salary of around $1 million, and he’ll join a right-side that already contains Nate Schmidt and Tyler Myers, meaning he’s destined for bottom-pairing minutes.
Tanev, on the other hand, was handed a four-year, $18 million contract, and will be expected to play in the Flames’ top-four and in Hamonic’s place.
Both players needed a reduced role in 2021, but only Hamonic is getting one.
That alone gives Jim Benning and the Canucks the “win” in this “trade.”
That Hamonic might also be a more effective defender than Tanev in the present day?
That’s just the icing on the cake.
Next week, we’ll break down the whole Chris Tanev, Jacob Markstrom, Josh Leivo, and Louis Domingue for Travis Hamonic trade. Never mind.
Uncategorized
Recent articles from Stephan Roget