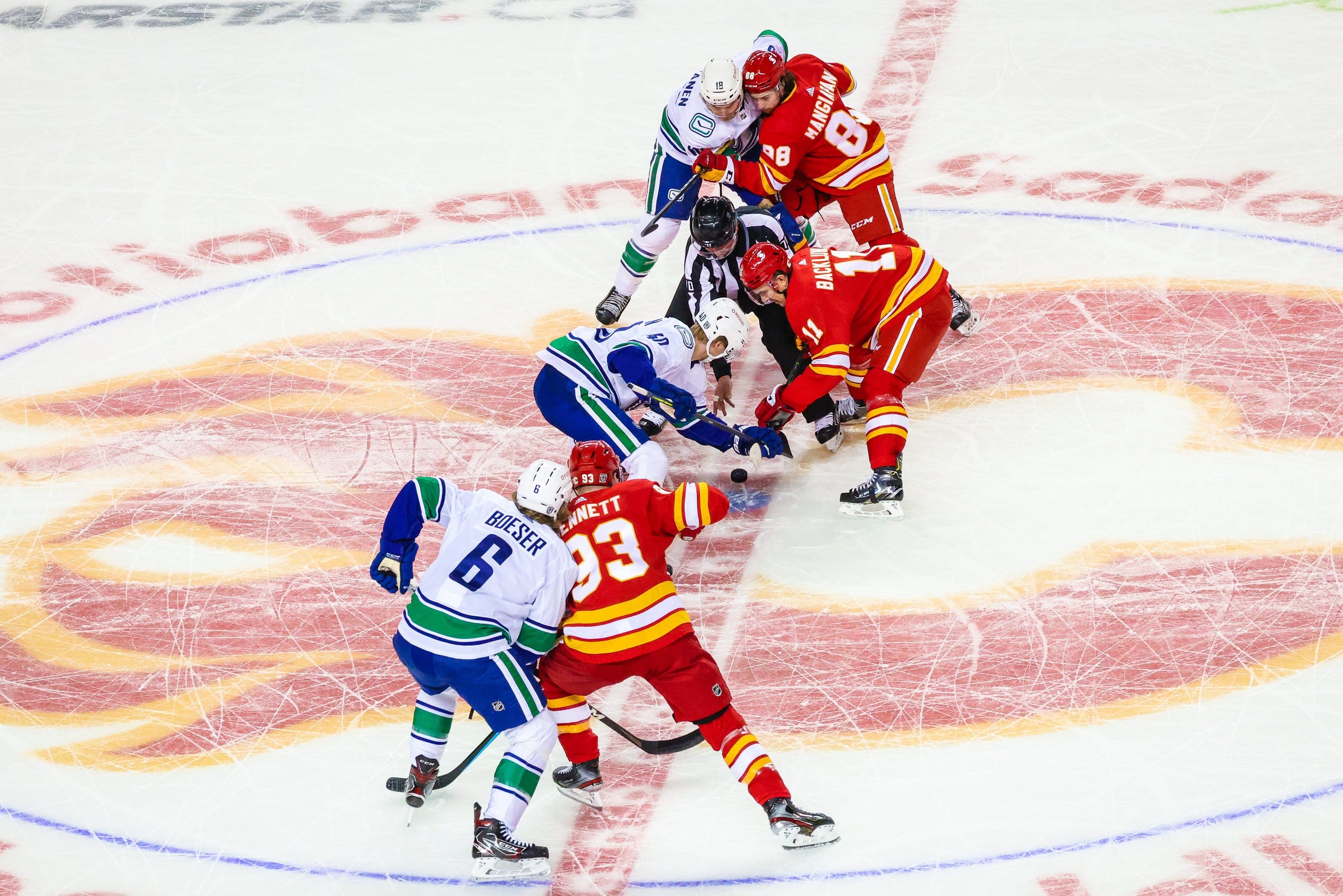 By Stephan Roget
1 year ago
By now, we’re all caught up in the furor of the 2021 regular season, but let’s also keep in mind that there’s something lurking in the Pacific waters, patiently awaiting a feeding frenzy. The Seattle Kraken are arriving this summer, and right now they’re readying their tentacles to pluck players from the 30 non-Vegas franchises via the 2021 Expansion Draft.
Fortunately, their regional rivals are particularly well-positioned to weather the process.
In case you missed our previous article, in which we examined the blueline in relation to Seattle’s arrival, here’s a quick refresher on the rules for the 2021 Expansion Draft:
“Current NHL teams can protect seven forwards, three defensemen and one goalie, or eight skaters (forwards/defensemen) and one goalie, under the following conditions.
* All players with no movement clauses at the time of the draft, and who decline to waive those clauses, must be protected and will be counted toward their team’s applicable protection limits.
* All first- and second-year NHL/AHL players, and all unsigned draft choices, will be exempt from selection (and will not be counted toward protection limits.”
For the Vancouver Canucks, this means a few more difficult decisions to be had with the offence then there were with the defence — but it still doesn’t give much cause for the front office or the fanbase to fear the coming of the Kraken. Our aforementioned article reached a pretty firm conclusion that the Canucks will only need three protection slots, if that, for their blueliners, and that leaves seven open for forwards.

Who doesn’t need to be protected?

Nils Höglander- Whether he played with the Canucks or in the AHL for the Utica Comets this season, Höglander was always going to be exempt from the Expansion Draft. This year marks Höglander’s third of professional hockey, but the SHL doesn’t count when it comes to expansion, so really it’s his first. Honestly, Vancouver would have no issues protecting Höglander if they had to, but it’s nice that they don’t, and that fans can simply enjoy his rookie campaign without fear of any Seattle-related repercussions.
Tanner Pearson- A storyline you can expect to hear all season long is the debate on whether or not to re-sign Pearson, a pending UFA. A strong start to 2021 — some have identified him as the team’s best player thus far — is promising, but most would still lean toward letting Pearson go and handing his spot over to a younger, cheaper player. If the team were to offer him a new contract, they’d have no reason to do so prior to the Expansion Draft, so he won’t need a protection slot regardless.
Brandon Sutter- A player who only barely merits mention here, most fans would be pulling their hair out if Sutter were extended, never mind extended and protected in the Expansion Draft. It’s worth noting that Jim Benning and Co. are free to give Sutter a new contract after the draft, avoiding the process altogether, but it’s likeliest that they cut ties altogether unless he experiences a major bounce back in 2021.
Marc Michaelis- The Canucks’ latest NCAA free agent impressed in training camp; and enough so that he remains on the taxi squad as of this writing. Come February, Michaelis is probably headed down to Utica to get his first taste of professional hockey, but either way he’s not eligible for the Expansion Draft — despite his relatively advanced age of 25.
William Lockwood- Another player freshly signed out of the NCAA, albeit as a drafted prospect, Lockwood has had a long, injury-filled journey toward an NHL contract, but he’s finally ready to embark on his rookie pro campaign. He’ll be suiting up for the Comets as soon as that is possible, and he won’t be eligible for Seattle to select.
Carson Focht- With a brand-new entry-level contract in hand, Focht is ready to graduate from the WHL and join the Utica Comets, thus saving himself from a truncated 24-game schedule. Straight out of junior, he’s obviously not eligible for the Expansion Draft — though he’ll still have to make some noise in his rookie pro season for that to be thought of as a lucky break.
Vasili Podkolzin- Currently an unsigned draft pick, Podkolzin belongs in the list below, but he probably deserves special mention because the Canucks have already announced their intention to sign him in late April when his KHL contract expires. Even if that comes to pass, and even if Podkolzin plays regular season or playoff games for Vancouver, he will be considered a first-year pro and will not have to be protected. And, if he enjoys immediate success in the big league, that may leave the Canucks with two exempt top-six talents — an enviable position for any team to find themselves in.
All unsigned draft picks- As was previously mentioned, all unsigned draft picks are exempt from the Expansion Draft. That list includes Podkolzin, Arvid Costmar, Jack Malone, Aidan McDonough, Dmitri Zlodeyev, Linus Karlsson, Jackson Kunz, Artyom Manukyan, Karel Plasek, and Dmitry Zhukenov. Ethan Keppen will have to either be signed or have his rights relinquished before the 2021 Expansion Draft, but either way he won’t have to be protected.

Who absolutely has to be protected?

Elias Pettersson- Pettersson is currently skating in his third NHL season, which means he is eligible to be selected by the Seattle Kraken if not protected. There’s debate to be had about whether Pettersson or Quinn Hughes is the Canucks’ most valuable player, but with Hughes still exempt, there’s no doubt that Pettersson is the player most worthy of a protection slot. Hopefully, a new contract comes first.
Brock Boeser- There were those in the fanbase and mediasphere who favoured trading Boeser this offseason, but those calls have mostly quieted after a dominant training camp and a strong start to the regular season. Even if the team were to explore a deal — which they shouldn’t unless they receive the proverbial “offer one can’t refuse” — they would still hold a protection slot for Boeser.
Bo Horvat- The captain, second line lynchpin, and clutch playoff performer isn’t going anywhere. Signed for two more seasons after the Expansion Draft at a bargain price. Horvat still cracks the team’s top-five most valuable players, and he’ll be leading Vancouver against their rivals to the south for years to come.
JT Miller- At 27, Miller is definitely the elder statesmen of the Canucks’ core, but he’s no less worthy of a protection slot. Signed for two further seasons after the Expansion Draft at an extremely reasonable rate, Vancouver’s top scorer in 2019/20 has already proved his value several times over; whether it be by his performance last season or the team’s performance in his absence to start out 2021.

Who else might be worthy of a protection slot?

Adam Gaudette- Truly, Gaudette only barely misses out on being listed with the four “must-protects” above. As a center, he’s naturally more valuable than other forwards, and he’s seen enough progress in each of his professional seasons thus far to suggest the best is yet to come. He’ll need another new contract after this year, but that shouldn’t change anything regarding his expansion status. Expect him to take up the fifth protection slot.
Jake Virtanen- A year ago, in the midst of what could be construed as a breakout campaign, the notion of not protecting Virtanen would have been laughable. But a difficult playoffs, and yet another slow start to the season has many thinking it may be time for the Canucks to finally part ways with the local talent. Chances are best that would come via a trade rather than leaving Virtanen exposed for Seattle to take, but that’s now a far more possible outcome than was previously assumed.
Tyler Motte- On the one hand, protecting a 25-year-old fourth liner in the Expansion Draft seems like an odd move and questionable asset management. On the other, Motte was one of the Vancouver’s best playoff performers in 2021, and might be their best overall penalty killer. He’s exactly the sort of player Seattle might target if left exposed, and the notion of playing against a motivated Motte several times a season might be reason enough to protect him.
Zack MacEwen- The Big Fella has carved out a full-time NHL gig for himself, beating the odds as an undrafted prospect and bringing some snarl to the table that the forward corps were lacking. Whether or not that is enough to earn him a protection slot will be determined by his performance throughout 2021, but he’ll probably have to put some real numbers on the board to make it a reality.
Kole Lind- After two seasons of steady progress with the Utica Comets, Lind stands out as the only valuable forward prospect in the organization eligible for Seattle to select. To lose a player like this after developing him for so many years would be disappointing, but could very well happen if the Canucks choose to protect someone with a more proven NHL pedigree instead.

The Canucks may not be facing any dilemmas, conundrums, or rock-vs-hard-place scenarios when it comes to deciding which forwards to protect, but Benning and Co. have some tough decisions ahead nonetheless.
Let’s assume that all four “must-protects” stay with the team and are protected. That leaves three slots open for the five players listed above as “maybes.”
Chances are very good that Gaudette takes up spot number five, leaving just two slots remaining for the foursome of Virtanen, Motte, MacEwen, and Lind — in addition, of course, to any other expansion-eligible forwards the Canucks happen to pick up between now and July 21.
That means that, barring transactions, at least two of the four will have to be exposed to Seattle. Again, not a backbreaking decision by any measure, but one that will require careful evaluation throughout the year, and one that is guaranteed to spark spirited debate in the mediasphere.
As far as this author is concerned, currently those two spots would belong to Motte and MacEwen, leaving Virtanen and Lind free for the taking.
Obviously, the Canucks would rather not lose anyone. But if the Kraken’s choice comes down to a source of endless frustration or a middle-six prospect of slightly-above-average quality, it’s hard not to feel fortunate.

Is there a trade to be made?

As was the case when we discussed the blueline, we’d be remiss if we didn’t mention the possibility — or even the downright likelihood — of a transaction between now and the Expansion Draft that drastically alters the protection picture for the Canucks.
If it looks as though a player with some trade value, like a Jake Virtanen, is going to be exposed, it would obviously make sense to explore the market. But it’s important to remember that Seattle can only take one player from each team in the draft.
Trade Virtanen, and the Kraken take Lind, and now you’re down two forwards. Keep Virtanen, let the Kraken take him, and you get to hold on to Lind.
On the other hand, it’s probably fair to say that none of Motte, MacEwen, Virtanen, or Lind would represent a truly devastating loss. The Canucks should probably keep an ear to the ground to see if there are any teams looking to deal a talented forward that they don’t have a protection slot for, and be ready to jump on the opportunity.
Either way, the Canucks’ forward corps look more than ready to survive the arrival of the Seattle Kraken through the 2021 Expansion Draft — and then they just have to worry about surviving them on the ice.
Uncategorized
Recent articles from Stephan Roget