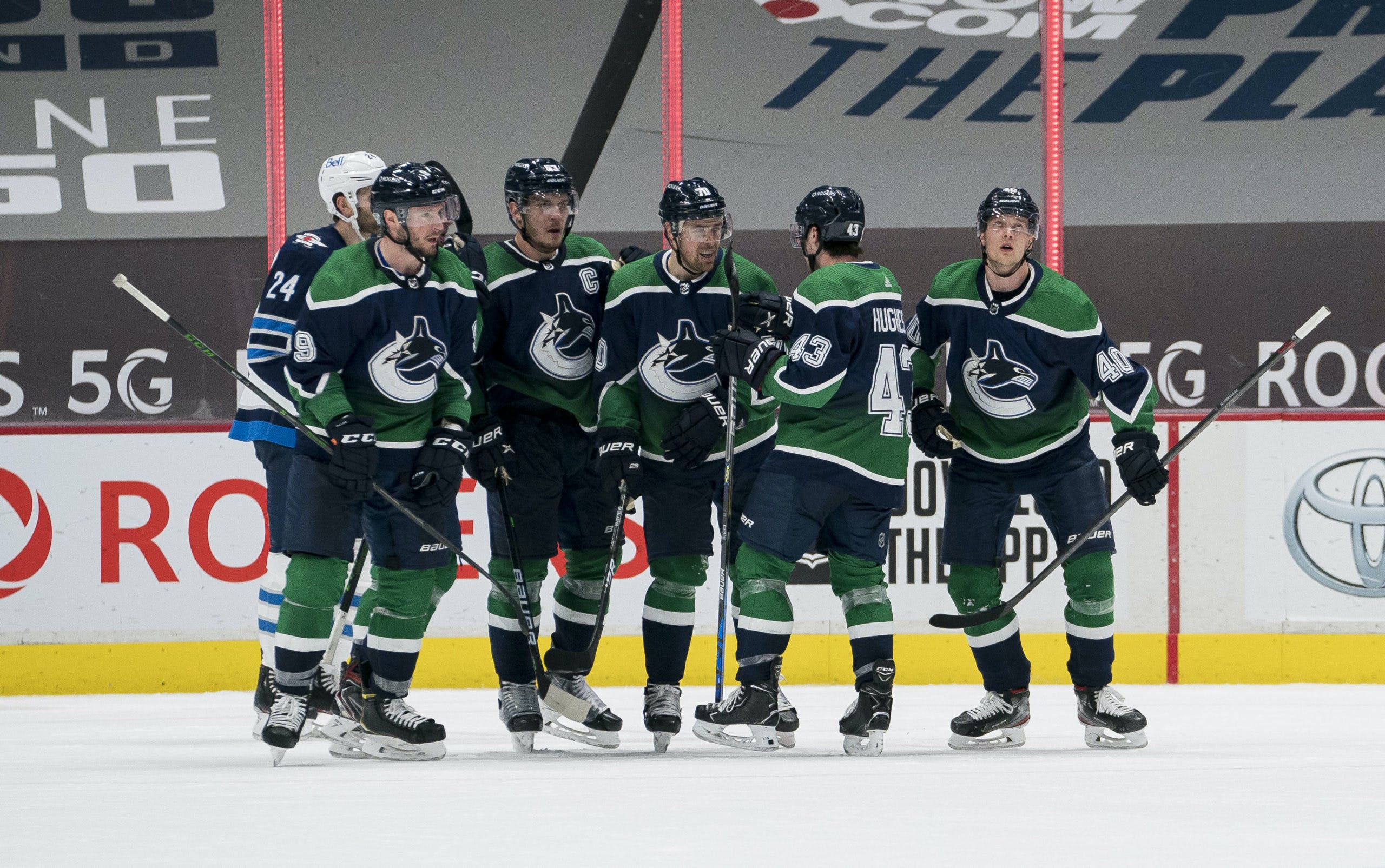 By Bill Huan
1 year ago
With the regular season set to conclude in less than a weeks’ time, it’s safe to say that this year has been A Nightmare on Granville Street for the Vancouver Canucks.
Lousy puns aside, most fans are likely already looking ahead to the 2021-22 campaign to try and see what the team’s opening night roster might look like. The forward group, in particular, has the potential to be vastly different given Vancouver’s pending free agents and the countless line combinations that they’ve used this season.
Even so, fans will be disappointed if they’re expecting a major shakeup up front. Although it might seem like the Canucks have the opportunity to make changes, the roster is still littered with inefficient contracts that will handcuff management from making moves. In all likelihood, Vancouver will continue to ice a top-heavy group that will be bogged down by ugly depth, and it all begins with the reunion of the Lotto Line.
*All stats used are as of May 12.

Don’t expect to see any changes to the top six

Following Elias Pettersson’s season-ending injury, J.T. Miller has gotten an extended run at centre, with many fans clamouring for him to be the team’s 3C next season. The idea is a sound one, but the actual numbers scream against it.
Those stats aren’t just a result of the current outlier season, either. Last year, the Canucks controlled shot attempts 46.58% of the time when Miller played without Pettersson at five on five, with an even worse expected goals percentage of 41.99%. If you’d like Miller to centre his own line, he needs to first show the ability to adequately control play without Pettersson, and that just simply hasn’t happened yet.
Of course, Miller will still be a huge upgrade over the centres that Vancouver has recently deployed in their bottom six, but it’s important to remember the opportunity costs involved; taking Miller off Pettersson’s wing also means breaking up the Lotto Line, which is one of the only competitive advantages that the Canucks have over other teams. Sure, Vancouver’s depth would improve, but the top line would take a big hit as well, and that’s not a trade-off worth making.
Similarly, the second line of Tanner Pearson, Bo Horvat and Nils Höglander should remain intact too. This shouldn’t come as a surprise since they’ve been the most consistent trio all season long; the Horvat line has controlled shot attempts 52.58% of the time at five on five and owns a 51.49% expected goals percentage while having an even better actual goals percentage of 54.17%.
The only resistance to this might be the idea of having Vasily Podkolzin take Pearson’s spot, but the likelihood of that happening to begin next season is slim. Remember, Höglander wouldn’t have been in the top six either if the Canucks hadn’t mishandled the Tyler Toffoli situation, and he’d still be more suited to the third line of most teams (at this stage of his career) if it weren’t for Vancouver’s lack of depth. The same logic applies to Podkolzin, who’ll likely start as the Canucks’ third line right winger and work his way up from there.

How will the Canucks’ bottom-six look next season?

Assuming he’s healthy, Tyler Motte seems like a lock to fill the other wing spot on the third line, but that isn’t a certainty until we figure out who will play down the middle. It seems like the Canucks will need to scour the free-agent market with Brandon Sutter set to become a UFA, but unfortunately, there aren’t many players who fit the team’s budget and needs. The available skaters will either be too pricey (Danault) or too risky to sign due to their advanced age (Bozak, Staal, etc…). As it currently stands, Sutter’s familiarity with the team will likely result in him re-signing in the offseason — hopefully to a one-year deal that doesn’t exceed $1.5 million.
With Sutter back on the third line, Antoine Roussel will likely slot in at left wing. This isn’t to say that Roussel is a superior player to Motte, but rather the chemistry that he has with Sutter. The Roussel/Sutter combo has been surprisingly decent this season, although they’ve played less than 110 minutes at five on five so far.
This leaves Motte to play beside Jay Beagle on the fourth line, but there are a number of candidates who could complete the trio. Two options are pending UFAs Jimmy Vesey and Travis Boyd, who received a lot of attention when the Canucks claimed them off waivers.
Both have scored at middle-six rates in the past and many fans thought that they would vastly boost the team’s depth, but neither player has fit in well with Vancouver. They’ve combined to score an abysmal two points in 29 games and have been liabilities at both ends of the ice. 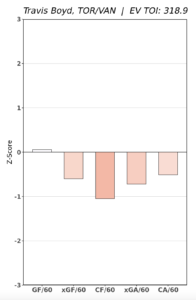 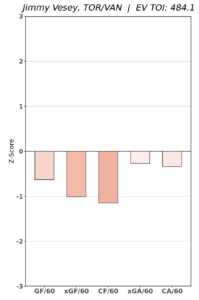 If we go by stats, the remaining spot should belong to Zack MacEwen, who has posted decent underlying numbers this season but can’t seem to get out of Travis Green’s doghouse. MacEwen currently has a corsi of 47.53% and an expected goals percentage of 47.57%, which rank sixth and fourth, respectively, among forwards who’ve played over 100 minutes at five on five this year.
Those stats are undoubtedly boosted by playing extremely sheltered minutes, but that has been the case for the Canucks’ bottom six all season long, so why not give MacEwen a longer leash and see what he can do?
Lastly, if Vancouver decides to carry two extra forwards on their roster, those spots will likely be filled by Matthew Highmore and Jayce Hawryluk. Highmore has been given an extensive look in the top six to end this season but the team has struggled to control play with him on the ice, as he currently sports a 40.40% corsi and 41.75% expected goals percentage.
Hawryluk hasn’t been much better and is set to be an RFA, but like my buddy Stephan Roget said, it doesn’t hurt to give him a qualifying offer since his full contract could be buried in the minors (which is where fan favourite Loui Eriksson will be).
It’s also possible that one of MacEwen, Highmore, or Hawryluk (if re-signed) gets selected by the Kraken in the expansion draft, which would open the door for Kole Lind to make the roster. Some fans might the rookie to be a full-time NHLer regardless, but keep in mind that he likely wouldn’t have made his debut if the Canucks still had a good chance of making the playoffs, and it doesn’t hurt to have him continue developing in the AHL given the team’s close proximity to Vancouver next season.

Even though the Canucks have used countless line combinations this season, it’s unlikely that there’ll be significant changes to their forward rotation next year. The top six will remain intact and be one of the team’s biggest strengths, but that advantage will likely be nullified by their weak depth. The addition of Vasily Podkolzin could give the bottom six some more life, but meaningful changes will need to wait until the 2022-23 season when most of Vancouver’s inefficient contacts have finally expired.
Stats courtesy of Natural Stat Trick and Evolving Hockey.
Uncategorized
Recent articles from Bill Huan