Why the Canucks should make changes to their playstyle this season 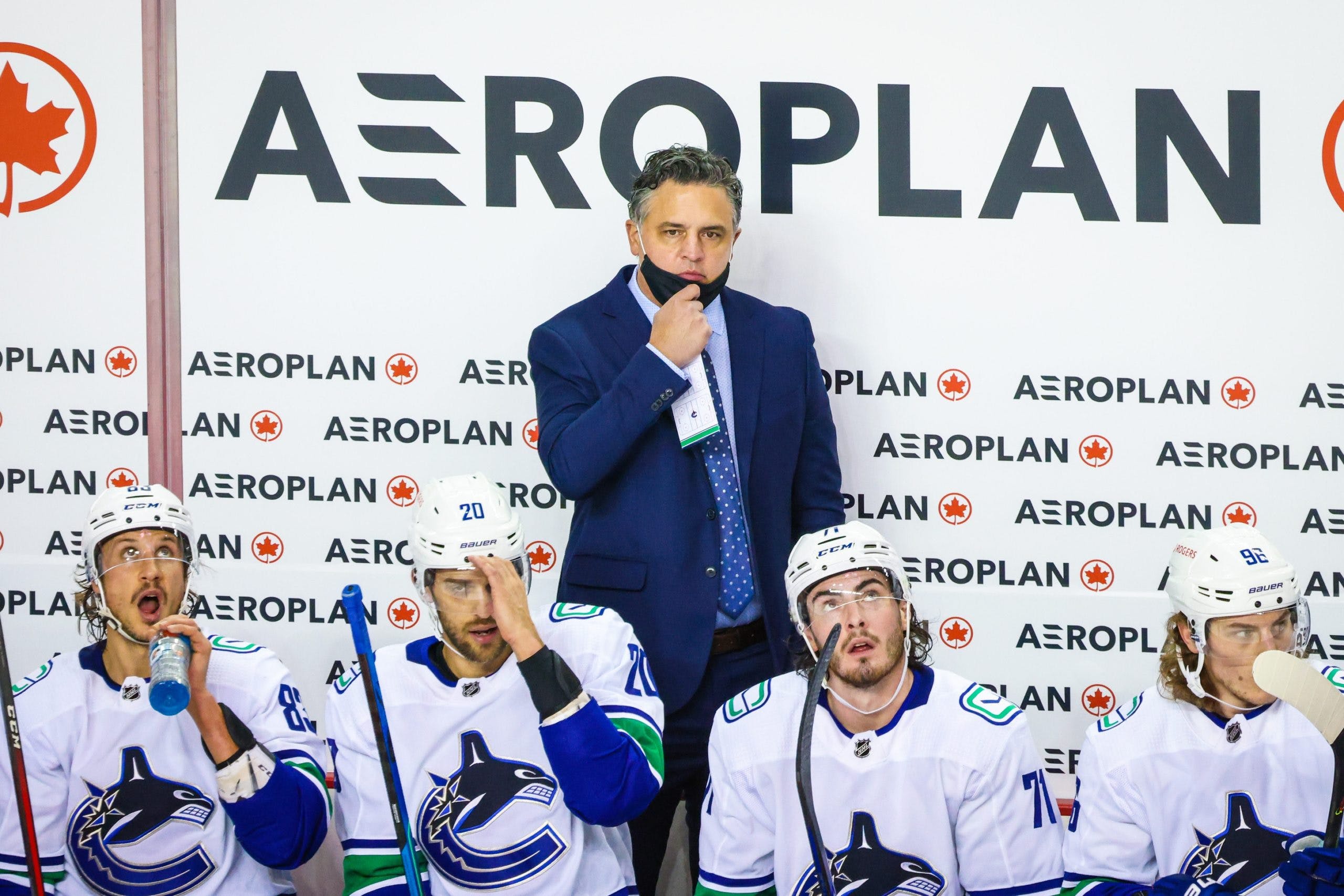 By Bill Huan
1 year ago
Dump and chase.
Three words that Canucks fans are all too familiar with and might have come to despise over the past few years. It’s the system that the club has mostly used in the Travis Green era, to varying levels of success.
This forecheck-heavy style might’ve been well-suited to an older group, but that could all change in 2021-22. With younger and more skilled players replacing a number of slower veterans, the Canucks will have the opportunity to deploy a system that’s predicated more on puck possession, which could pay dividends if used correctly.

Unsurprisingly, the Canucks were a below-average team last year when measuring the percentage of times in which they carried the puck into the offensive zone. 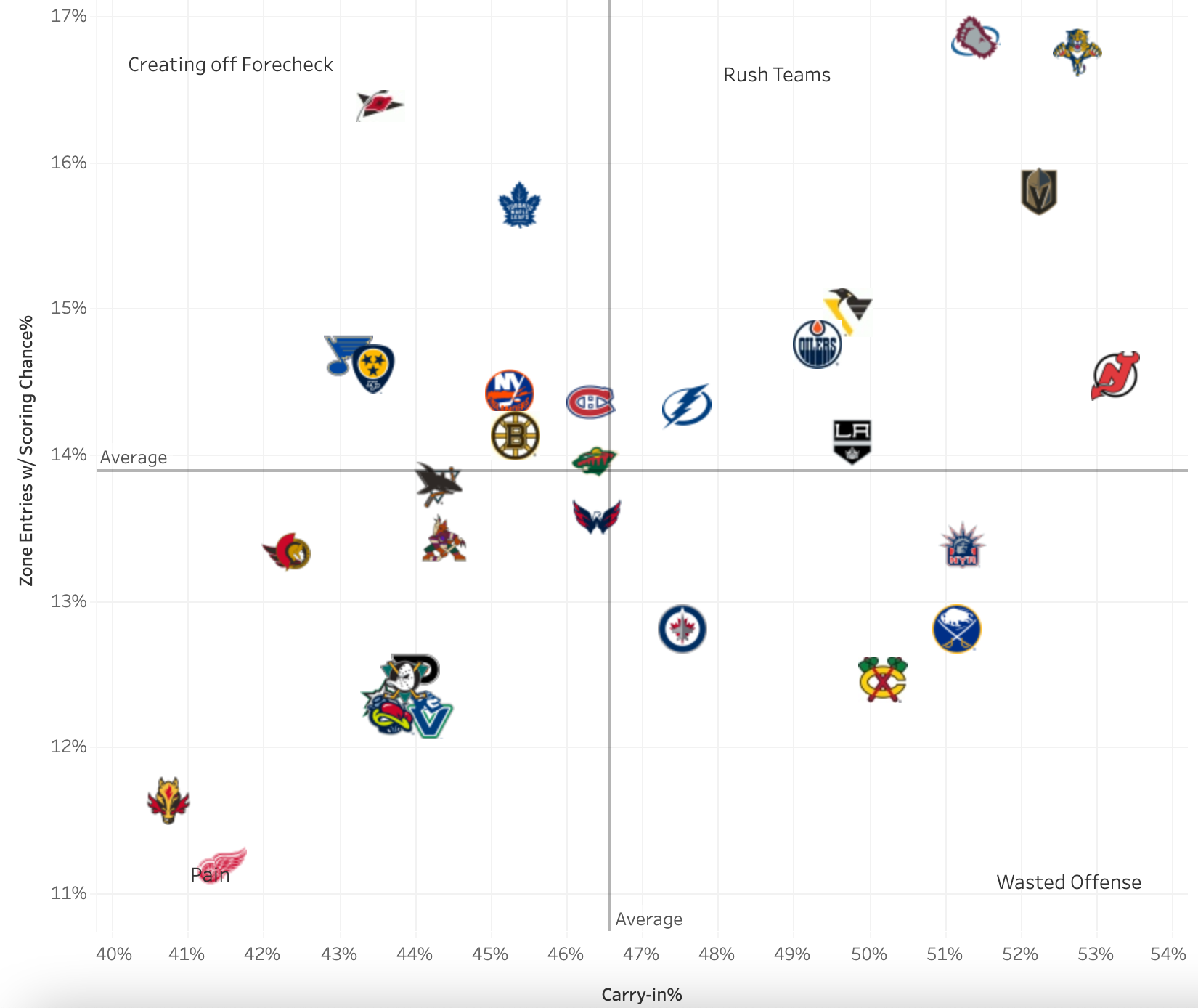 However, the bigger issue isn’t with their system, but the fact that it wasn’t successful. The chart above shows that roughly 12% of the team’s entries resulted in scoring chances, which is a decidedly below-average mark.
Some of the Canucks’ struggles can be attributed to a nightmarish season marred with a COVID-19 outbreak, but the club was only slightly better running the same system in 2019-20. 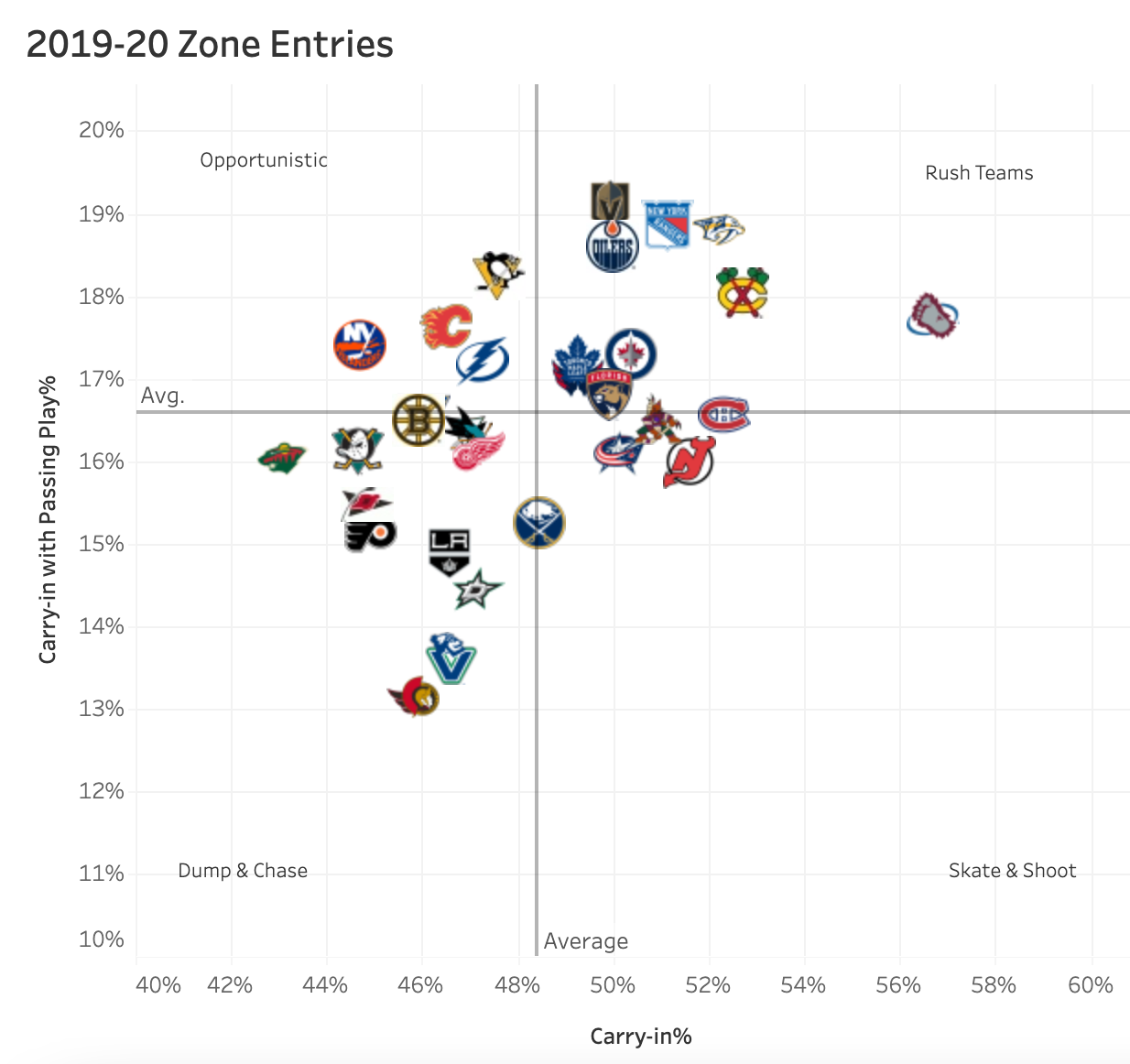 The y-axis on the second chart displays the percentage of carry-ins that resulted in passing plays rather than ones that ended up with scoring chances, but there’s a direct correlation between the number of passes completed in the offensive zone and the odds of scoring. A 2016 study showed that players registered a 3.9% shooting percentage after carrying the puck in without receiving a pass in the offensive zone. That percentage rose to 8.1% if one pass was completed, and almost doubled to 15.6% following two passes.
In other words, it’s fair to say that the 2019-20 Canucks struggled to generate scoring chances due to their lack of passing plays in the offensive zone, so the dump and chase system has been ineffective even before their recent COVID-ravaged season.
With that said, it’s important to note that systems aren’t the sole reason for a team’s success or failure; for example, the Carolina Hurricanes played an even heavier dump and chase style than the Canucks and were one of the league’s best teams last season.
Even so, history tells us that controlled zone entries are the most efficient method of scoring. Out of 7142 tracked regular season and playoffs goals from the 2012-13 to 2014-15 season, 64.16% of them were scored after controlled entries as opposed to 22.42% from uncontrolled ones.
Combine that with the club’s lack of success using a forechecking system and the revamped roster, it seems like the perfect storm for the Canucks to start playing a more puck-possession game.

The new roster will be more suited to maintaining possession

Conor Garland and Jason Dickinson, the Canucks’ two biggest additions up front, have both shown the ability to maintain possession on zone entries, albeit in different ways. Garland achieves this through sheer volume, as no regular Coyotes forward had a higher entries/60 than he did last season (Dryden Hunt dressed up in less than half of the team’s games). 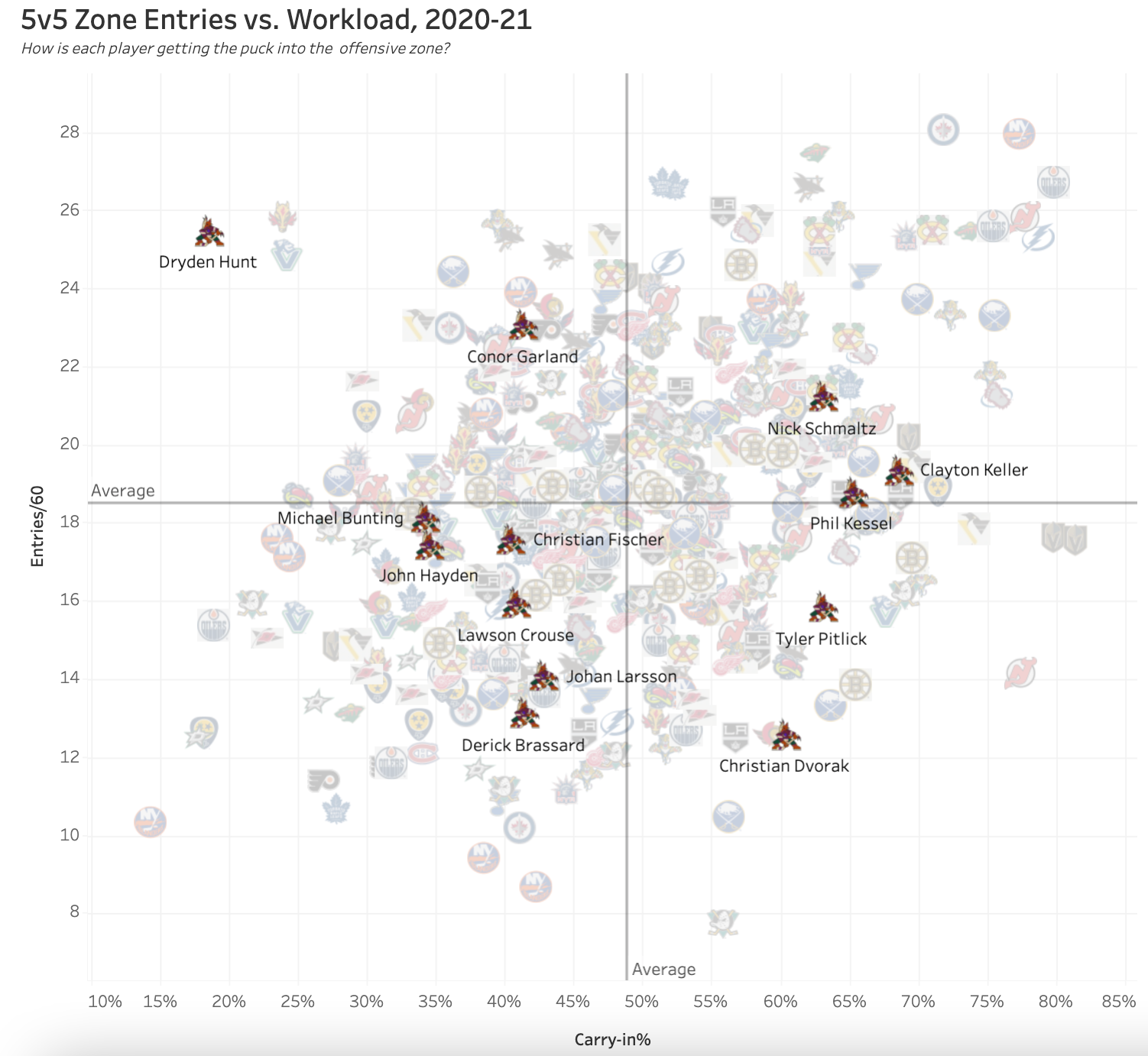 Meanwhile, Dickinson prioritizes quality over quantity with a higher carry-in percentage but fewer entries per hour. 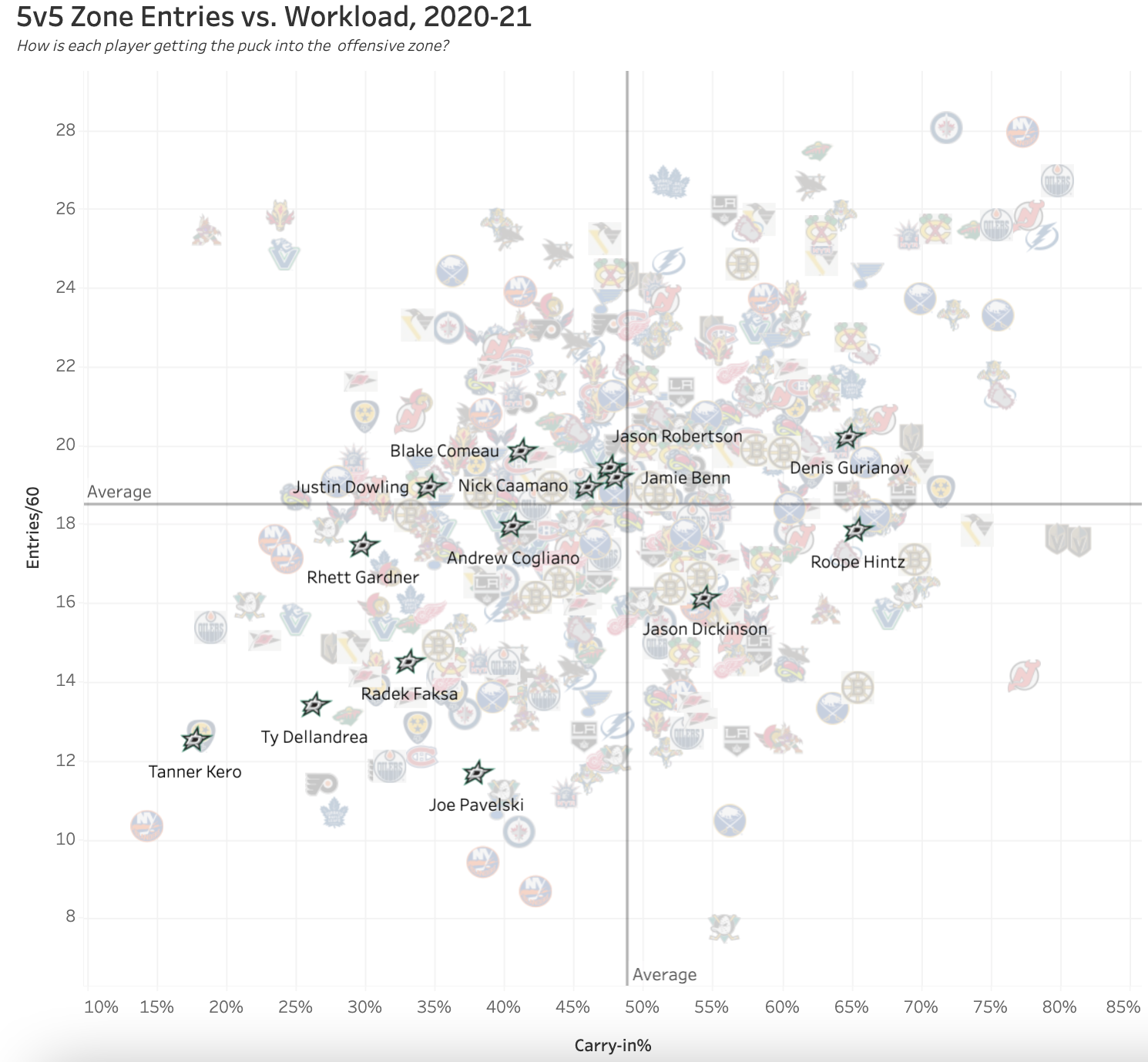 Both players also played on teams that played a similar dump and chase style like the Canucks did, meaning that neither Garland nor Dickinson’s tracking stats were inflated due to their playing environment. Their former teams played stifling defensive systems, so being placed on a more offensively aggressive club like the Canucks might actually boost their numbers.
Outside of the new additions, the Canucks will also have more opportunities to play a puck possession style due to the departure of a few players. The graph below shows that Jay Beagle (bottom left), Adam Gaudette, Jake Virtanen, and Antoine Roussel (between Tyler Motte and Brock Boeser) were four of the worst players at entering the zone with possession, so the club improved simply through addition by subtraction. 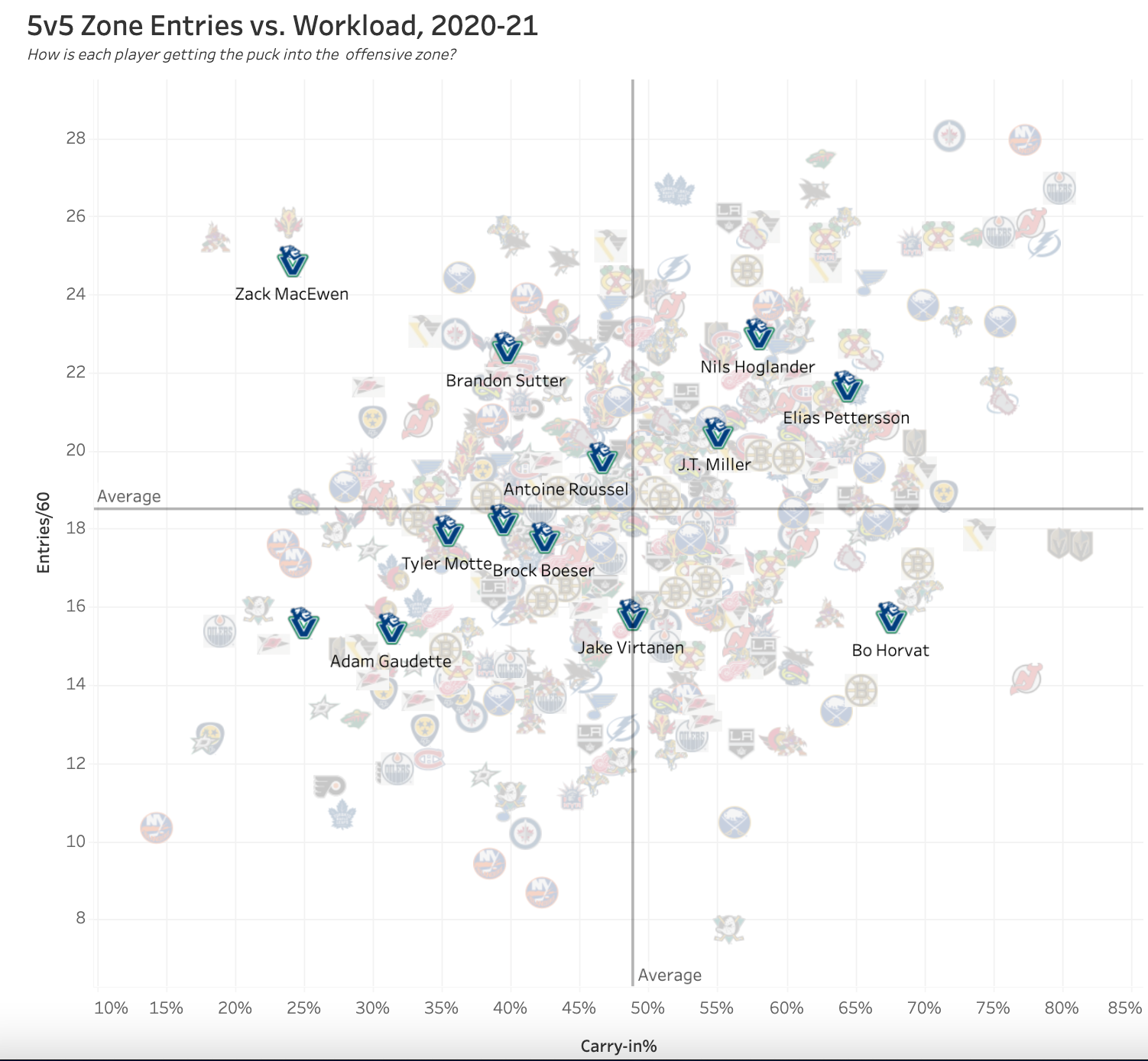 With a more lethal forward group, the Canucks can have at least one reliable puck carrier on each of their top three lines; Elias Pettersson and J.T. Miller on the Lotto Line; all three of Bo Horvat, Nils Höglander and Garland on the second unit; and Dicksinon on the third. With Vasily Podkolzin playing more of a north-south game that’s predicated on forechecking, the club could even opt to pair Höglander with Dickinson and move Podkolzin up alongside Horvat so that there are two reliable puck carriers on each of the three lines.
On the backend, Quinn Hughes is unsurprisingly one of the best in the league at zone exits and entries, but the loss of Nate Schmidt will hurt the club’s mobility from the blueline. 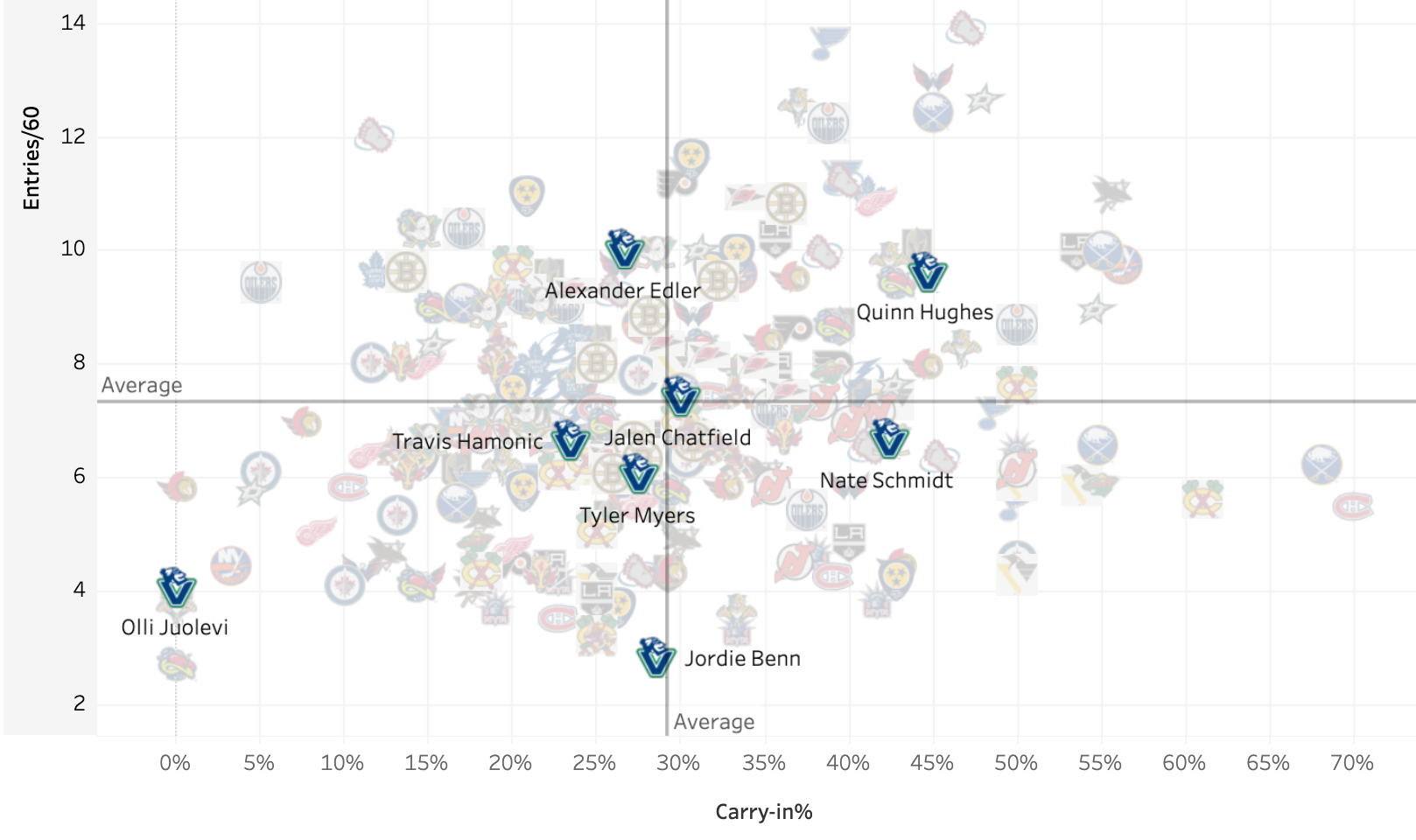 Fortunately, Oliver Ekman-Larsson can make up for that loss as he was still reliable at entries even on the heels of his worst season in recent memory. 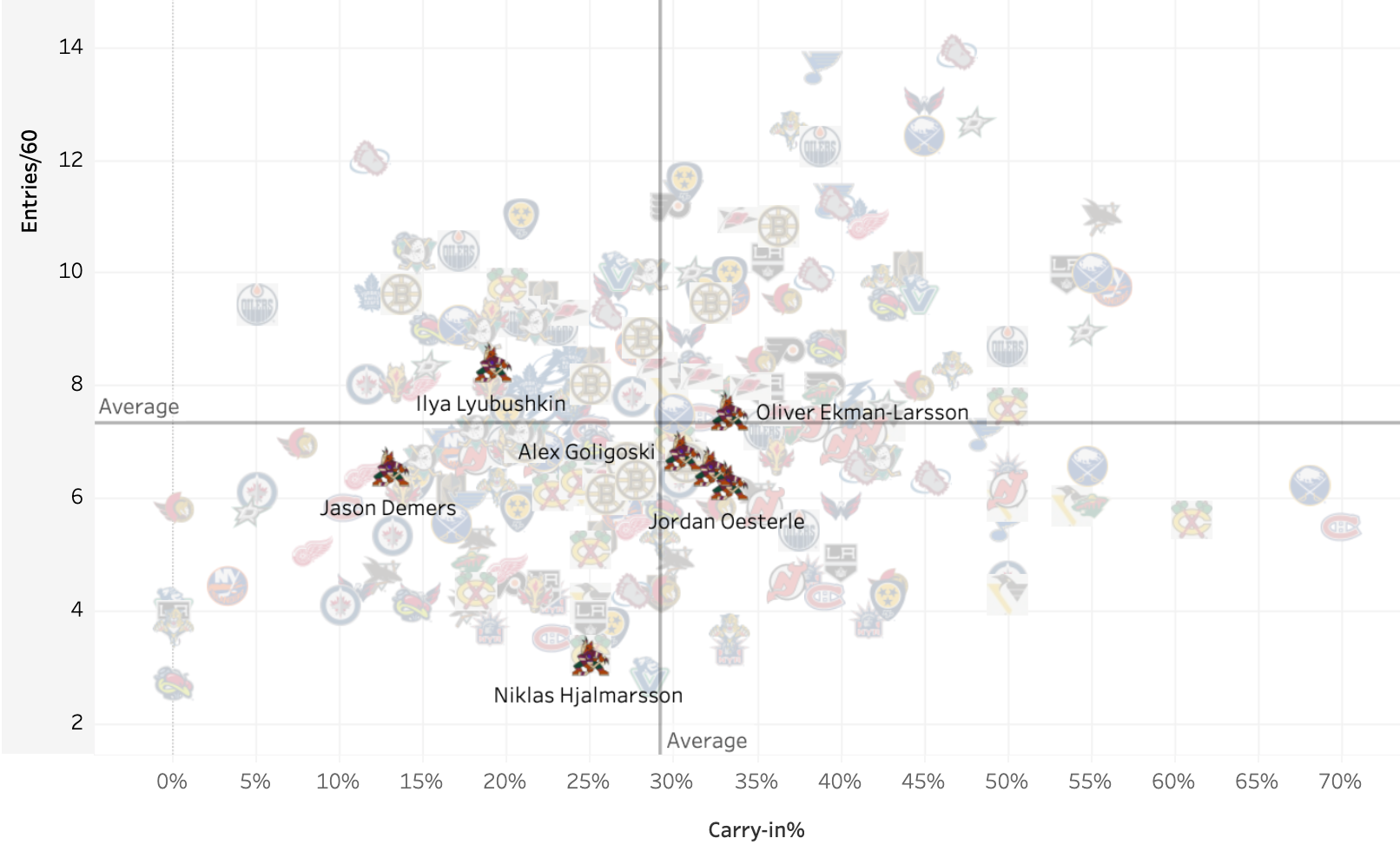 The biggest addition to the defence, however, could be Jack Rathbone. If the rookie is able to make the team out of training camp, there’s no doubt that he’ll be a huge upgrade over the slow-footed Olli Juolevi, and the Canucks could have a reliable puck mover on the ice at all times.

Studies have shown that systems predicated on puck possession and controlled entries are more successful than ones reliant on forechecking, and the skillset of the Canucks’ new forward group suggests that the team should consider playing more of a possession-based style.
Hughes, OEL, and Rathbone — in a small sample size — have also shown that they’re capable puck-carriers, so the forwards can lean on more support from the blueline. More importantly, maintaining more possession can also reduce turnovers and decrease scoring chances against the Canucks, so playing this brand of hockey could improve both the team’s offence and defence.
At the very least, experimenting with a new system is worth a shot. The club has struggled with its dump and chase style over the past few years, and the Canucks need to change their playstyle if they truly want to go all-in and have a successful season.
All stats courtesy of Corey Sznajder.
Uncategorized
Recent articles from Bill Huan