By Bill Huan
1 month ago
Recently, The Athletic’s Pierre LeBrun reported that the Canucks are looking to make a “hockey deal” in a Bo Horvat trade.
In other words, the team is more interested in adding established players who can help them win now and down the road instead of future assets for a potential rebuild. Unsurprisingly, management is said to covet either a centre or a right-shot defenceman in return.
At this point, it’s safe to say that the majority of fans would like to see a rebuild. There’s no need to rehash that debate since the organization doesn’t seem to want to go in that direction, but their apparent wanting to execute a “hockey deal” is still astonishing given that those types of trades just don’t typically happen with big-name UFAs.
The worst teams in the league are often focused on getting the best draft odds possible, while the best don’t want to sacrifice impact players when they can trade future assets instead.
With that said, there are still a few potential deals that could make sense, even if the fit isn’t perfect due to the issues we just discussed. So, let’s take a look at a couple of hypothetical trades and analyze why they could and couldn’t happen.
Note: These aren’t one-for-one deals but rather players to target.

Boston has been the best team in the league this year and it hasn’t been particularly, close, either — their 50 points are five clear of second-place Vegas, and they’re the only club with a win percentage over .800%.
So why might they be interested in Horvat? Well, Patrice Bergeron is 37 and will likely retire this year, and 36-year-old second-line centre David Krejci seems destined to do the same. The Bruins don’t have any other pivots who are projected to be top-six centres, which is an even bigger issue considering David Pastrnak is also a pending UFA.
Sure, Boston could always make a run at Horvat in free agency, but they’ll have a much higher chance of signing him if they acquire him first, especially if the team goes on a long playoff run. Locking up Horvat would also give Pastrnak extra incentive to stay considering Bergeron and Krejci’s likely departures.
The Bruins have also been the best defensive team in the league by a decent margin. They’re currently giving up 1.69 goals per hour at five on five, and no other club is below 1.80. A lot of their success is due to elite goaltending that’s likely unsustainable (their netminders have saved 11 goals more than expected at five on five), but Boston is still second in expected goals against at 2.16.
In other words, the team will be dealing from a position of strength should they choose to trade a blueliner. The name that makes the most sense is Brandon Carlo, who’s become one of the more underappreciated defensive defencemen in the league.
In fact, he has the lowest expected goals against per 60 figure (1.83) in the league among defencemen who have logged at least 300 five on five minutes, and his actual number of 1.08 is fourth as well. A 26-year-old right-handed shot, Carlo is the exact type of player the Canucks would love to pair alongside Quinn Hughes, and he’s signed until 2027 at a reasonable AAV of $4.1 million.
Unfortunately, that’s also why Boston probably won’t part with him. With Charlie McAvoy and Hampus Lindholm combining to make $16 million annually until 2030 and Pastrnak set to command over $10 million himself, the Bruins need bargain contracts on their books.
Krejci and Pastrnak’s chemistry on the second line has also given Boston the depth they sorely missed in years prior (their 3.8 goals per game ranks second league-wide), so they don’t need to sacrifice a valuable defensive piece to add more offence.
Ultimately, it depends how desperately the Bruins want a fall-back plan if their two best centres retire at season’s end. Trading Carlo would be a significant loss, but the addition of Horvat would give Boston perhaps their best chance at winning a cup with their contention window likely coming to an end.

With Dylan Larkin also about to hit free agency at the end of the year, Detroit might want to add another centre as an insurance plan. If they acquire Horvat and manage to re-sign both players, the Red Wings would be set down the middle as well, right as their competitive window opens.
Detroit also has arguably the best up-and-coming RHD in Moritz Seider and another great defensive prospect in Simon Edvinsson, but they lack high-end centres outside of Larkin. Seider is obviously an untouchable, so the Canucks could target Filip Hronek instead, a two-way stud who can play in all situations.
This season, Hronek is the only Red Wing who’s played over 150 minutes at five on five with a corsi over 50% (51.23% to be specific) and Detroit has scored a sparkling 3.03 goals per 60 with him on the ice while only giving up 1.46. Those numbers are buoyed somewhat by a 1.05 PDO and an on-ice save percentage of .946%, but his xGF/60 of 2.43 and xGA/60 of 2.33 is great nonetheless.
Hronek’s play is even more impressive considering his tough matchups. When adjusting for his quality of teammates and competition, Hronek rates as a legit top-pairing blueliner who drives play at both ends of the ice. 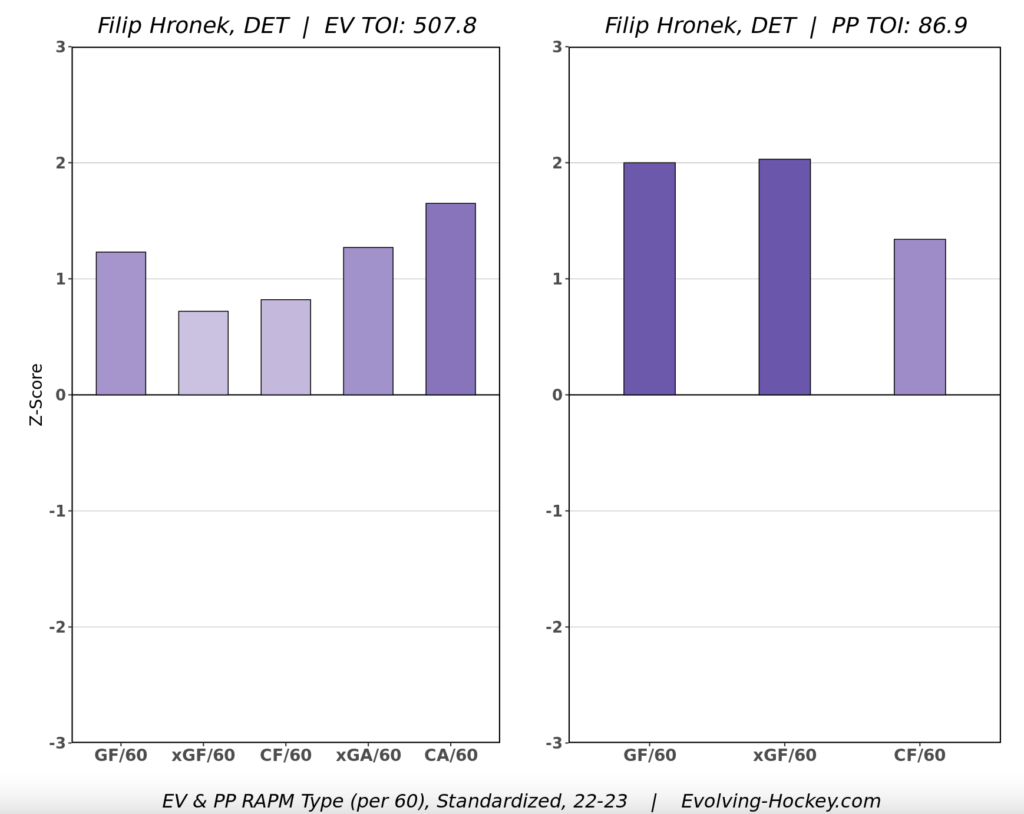 However, in order for the Canucks to land Hronek, they might actually need to add on top of Horvat. It would take a significant haul for Detroit to break up one of the best 1-2 punches league-wide in terms of RHDs, especially considering Hronek fits their timeline better than the Canucks’ captain.
If management really wants to make a “hockey deal,” though, then they must be willing to explore all avenues and consider attaching sweeteners in a Horvat trade.

Ah, yes. The annual Matt Dumba trade speculation. He’s usually linked to Brock Boeser, but could a swap with Horvat make more sense?
The Wild have the worst centre depth among teams with championship aspirations so it shouldn’t be surprising if they inquire about Horvat. At 28, Dumba isn’t as young as other options and isn’t the same quality of player either. On a strong puck possession team, he’s one of a few players who has a corsi under 50%, although Minnesota has been break-even during his five-on-five minutes (19 goals for and 19 against) and Dumba’s xGF% is actually 50.91%.
Even so, those figures are likely propped up by his favourable surroundings, as Dumba’s isolated metrics paint a player who’s a slight negative at both ends of the ice.

As you can see, the Wild generate -0.15 expected goals per hour less when Dumba plays due to the team’s inability to create chances in front of opposing goalies, and they have the reverse issue in their own end as the team allows high a number of high danger chances in the crease (the red indicates a higher number of shot attempts), resulting in Minnesota giving up 0.05 expected goals more than usual.
The other issue is that Dumba will also be a UFA at the end of the season, so a trade with Horvat would essentially be the two teams swapping contract headaches. Horvat’s career year and Dumba’s lacklustre results mean that Minnesota will need to add significant assets to a potential deal as well, which could complicate trade talks.
Like Boston, this potential deal depends on how desperate the Wild are to add a high-end centre. It could also mean that the Canucks wouldn’t have found a better package for Horvat, which is entirely possible if management insists on finding an established player rather than considering adding future-oriented pieces.
In the end, the Canucks do have some potential targets if they want to trade Horvat for an established player, but the options are extremely limited and would require additional pieces being moved. This shows that the most logical route is still to deal him for future assets instead, which would make a lot more teams interested and drive up the asking price.
No matter what happens, management can’t be rigid in their stance and refuse to explore all avenues. It happened with J.T. Miller, and they can’t repeat the same mistake with Horvat.
Stats courtesy of Natural Stat Trick, Evolving-Hockey, and HockeyViz.
Editorials
Recent articles from Bill Huan