Which spot does the returning Travis Dermott take on the Canucks’ blueline? 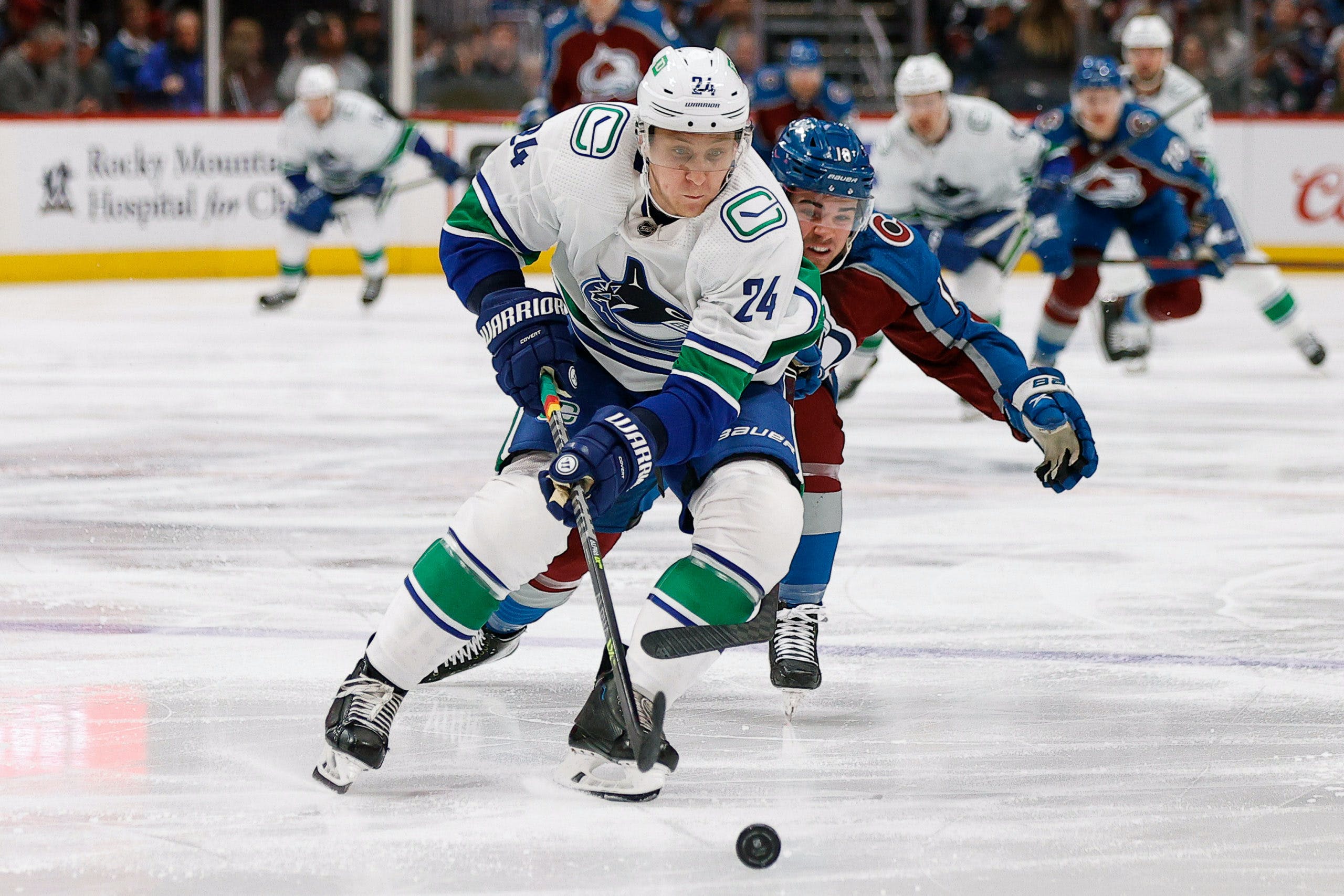 By Stephan Roget
1 month ago
The good news just keeps rolling in for Travis Dermott, here at the tail-end of 2022.
Dermott welcomed his first child to the world late last week, shortly after returning to on-ice action for the Abbotsford Canucks. A few days later, Dermott’s AHL conditioning stint would be terminated early as he was recalled back up to Vancouver, with the presumed intention of getting him into the NHL lineup as soon as possible after an extended concussion-related absence.
Dermott’s return isn’t just good news for him, it’s great news for the Vancouver Canucks and their still-struggling blueline. Dermott may not be a flawless defender, but based on his body of work in both Toronto and Vancouver last season, he’s probably going to consistently be one of the Canucks’ best six options on a nightly basis moving forward — so long as he can stay healthy this time around.
But options, in general, are something that the Canucks have in abundance, and if there’s one thing their blueline isn’t suffering from, it’s lack of personnel. As soon as Dermott officially comes off the injured reserve, the Canucks will have eight NHL defenders on their roster, and that’s not even counting Tucker Poolman on LTIR or Jack Rathbone in the minors.
Fortunately, cap will not be a complicating factor in Dermott’s return. The Canucks have room on their roster and under the upper limit to accommodate Dermott’s $1.5 million AAV. But having room on the roster for someone isn’t the same as having room in the lineup. Dermott does have the ability to play either side of the blueline, giving the Canucks extra flexibility, but that doesn’t change the fundamental truth that in order for Dermott to get back on the ice of the Adult Canucks, someone is going to have to sit…but whom?

Who is not coming out of the lineup

Quinn Hughes
Now that he’s finally scored a goal, there really isn’t anything that Hughes doesn’t do for the Canucks. Not only is he their number one defender with a bullet, Hughes might be the only blueliner on the entire roster with a genuine long-term future with the team. Having worked his way into the Norris Trophy discussion and into the top-ten in leaguewide assists, the only way in which Hughes ever exits the lineup is in the case of injury or his needing a break — which is feasible, given that he’s taking down more than 25 minutes in ice-time per night.
Luke Schenn
At this stage in his career, Schenn probably shouldn’t be the Canucks’ second-most reliable defender, but here we are all the same. At age 33, Schenn might just be having his best season ever, and the Canucks can’t afford to take him off the ice for a handful of practical reasons. The first and most obvious is that the Canucks simply do not play as well, or anywhere near as boldly, when Schenn is not on the ice.
The other is that Schenn is among the Canucks’ most valuable tradeable assets, and so they should be perpetually in the act of juicing his value between now and the 2023 Trade Deadline. There’s just no feasible scenario in which Schenn gets scratched, for Dermott or for anyone else.
Tyler Myers
Don’t scoff. For one, if Myers were going to be scratched for his gaffes and his lapses in defensive awareness, he’d have been scratched long ago. For two, if rumours are to be believed, Myers is number one on the Canucks’ list of cost-cutting moves between now and the upcoming offseason, and so they should be working to make him look as attractive as possible to potential suitors. Healthy scratching Myers does not accomplish that.
But really, it’s as simple as this: Bruce Boudreau clearly still trusts Myers to play more than 20 minutes a night, and that’s not going to suddenly change just because Dermott showed up.

Who could come out of the lineup for Dermott

Riley Stillman
Stillman’s on-ice struggles have been a continual point of conversation in Vancouver, ever since they gave up a second round pick and Jason Dickinson for him at the outset of the season. Despite being the Canucks’ worst defender in virtually every statistical category, Stillman somehow keeps managing to make it into the lineup on most nights, whether through appreciation of his physical play or the old sunk-cost fallacy.
Either way, if there’s a clear-cut candidate to exit the blueline now that Dermott is healthy, it’s Stillman. Management might not be happy about it, but if Boudreau still truly has control over lineup decisions, this is the right one for him to make.
Kyle Burroughs
This is a bit of a trick statement, because Burroughs is already in the press box most nights. Now, Dermott’s return is just one more obstacle between Burroughs and NHL ice-time. While Dermott does not have Burroughs’ trademark rough-and-tumble style, they’re both similar in that they can play either side of the ice and up and down the depth chart. Aside from the physicality, Dermott has higher-end skill in virtually every regard, and so when it comes down to a choice between the two, the lineup spot should be going to Dermott on most nights.
Burroughs, at the very least, is the perfect candidate to keep around as an 8D.
Ethan Bear
Bear has been subjected to a couple of healthy scratches lately, and that decision hasn’t proven too popular with the fans or members of the local media. For most outside observers, Bear looks like a winning acquisition thus far, and a bit of a stabilizing presence on the Canucks’ blueline. He plays steady, statistically elevates his partners, and defends a lot better than his frame would suggest.
The same, however, could be said for Dermott during his last stint with the Canucks, so maybe scratching Bear in favour of Dermott is more palatable? Either way, with Schenn and Myers fairly locked into place, taking both Bear and Burroughs out might be the only way to get Dermott some reps on the right side, which is something that the Canucks should definitely be looking to do. Just to mix things up, Bear should probably occasionally give his spot up to Dermott in the near future.
Oliver Ekman-Larsson
Now this is the controversial one. We know that, for a multitude of reasons, it’s very unlikely that alternate captain and owner of a $7.26 million cap hit Ekman-Larsson is going to be healthy scratched for the Vancouver Canucks. But that doesn’t mean that he shouldn’t be. There have been plenty of nights — especially those in which Stillman has already been scratched — in which OEL has clearly been the Canucks’ worst defender on the ice. His skating skills have deteriorated, and there might be nothing that can be done about that, but his suddenly questionable decision-making is something that could still be salvaged.
Taking some time out to watch the game from above could be beneficial to Ekman-Larsson, as could the message sent by scratching such a high-profile player on the merits of their play.
A left side of Hughes-Dermott-Burroughs looks workable for at least a few games.

As of Wednesday morning’s practice, Dermott had been penciled into the lineup on Schenn’s left side, knocking Stillman out of the lineup…for now, anyway. If this season has taught us anything, it’s that the Vancouver blueline is very much a fluid situation.
We can expect each and every one of these pairings to shift and swap around in the days and weeks to come. For now, Dermott receives probably the steadiest partner he could ask for, and that makes sense coming off such a lengthy absence. Who’s to say where he goes from here?
Who would you take out of the Canucks’ lineup to accommodate Travis Dermott’s return? Let it be known in the comment section!
Editorials
Recent articles from Stephan Roget