What the Vancouver Canucks can actually do with Jaroslav Halak 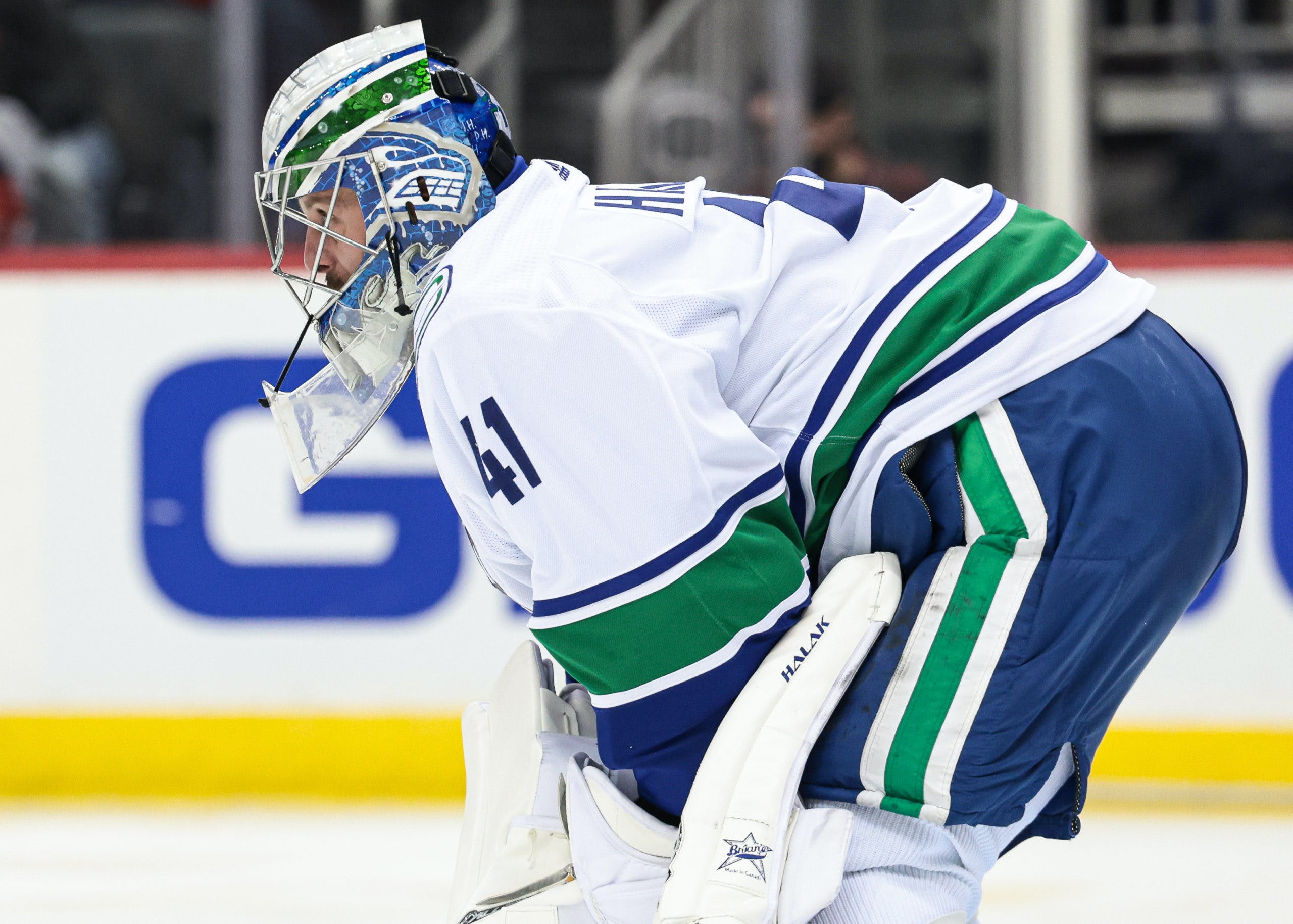 By Faber
9 months ago
The main job of a backup goaltender is to give the starting goaltender a night off every once in a while — especially on the second leg of back-to-backs.
For his past two starts, Jaroslav Halak hasn’t done his job well enough and has had to be bailed out by Thatcher Demko on nights when the Canucks’ starting netminder was supposed to get some much-deserved rest time.
But before you dump on Halak too much — keep in mind that in Halak’s past two starts, the team in front of him hasn’t done their jobs well enough either.
Also keep in mind that even Demko wasn’t immune to the Canucks’ dreadfully slow and unprepared starts, which have happened far too often this season.
It’s no secret that the Canucks are a team with plenty of flaws that get masked by their starting netminder.
Hell, even president of hockey operations Jim Rutherford himself said as much.
“We win a number of games because we have a franchise goalie. He makes up for a lot of our shortcomings,” said Rutherford.
But that’s a story for another day.
The Vancouver Canucks’ backup goaltender situation has not been a great one over the past two seasons.
The team has tried to bring in a better goalie who can calm the waters. Through their attempts, they overpaid Braden Holtby and bought his contract out, which will cost the team $1.9 million on the cap next season. This year, they signed Jaroslav Halak, who has already locked in his $1.25 million bonus for next season.
In the first year of freedom from the Roberto Luongo recapture penalty, the Canucks will be paying a minimum of $3,150,000 in dead cap because of their 2019-2022 goalie situation. That $3,150,000 is more than the Luongo recapture penalty.
It’s clear that Jim Benning made mistakes but we’re not here to talk about that. We’re here to see what the Canucks can do with Halak at the upcoming trade deadline and view which teams may have interest in the veteran goaltender.
First off, we need to recognize that Halak has a no-move clause in his contract. As much as many wanted to see him moved down to the minors in favour of Spencer Martin, he cannot be sent down to the minors. Halak cannot be moved off this roster without him waiving his NMC. He clearly is not going to do that to go to the minors but if the right team were to call, maybe there’s a chance Halak would be willing to be part of a cup run as a backup goalie.
Let’s look at the first option for the Canucks and Halak.

Waiving his NMC for a trade

We can see that certain teams around the league who are holding onto or fighting for a playoff spot have some serious concerns in goal.
Here are a few teams that may be interested in Halak’s services.
The Edmonton Oilers have had their team save percentage bounce around the 0.900 mark all year long. They seem to be hoping and praying that Mikko Koskinen or Stuart Skinner can be strong enough to take them on a playoff run.
Halak would provide added depth to the Oilers’ goaltending and could start as a backup and be there for the team to lean on if they find him catching fire.
The Vegas Golden Knights are interesting as well. They just got Robin Lehner back but have had bad goaltending all season long. I’m not sure what the trust level is in backup Laurent Brossoit. They may want a veteran piece to be in the mix around Lehner.
I’m going to throw the Washington Capitals in there just because they have had to start four different goalies this year and their two starters are both under the age of 27.
The Caps are pushing for the cup once again and adding a veteran backup like Halak could help them. It just feels like the team that may be interested in trading for Halak. I can totally see him fitting into their group as a small deadline deal.
Now, as for the trade, I don’t even think the return is important.
The big part of this trade is getting the $1.25-1.5 million bonus that is owed to Halak next season off the books. If I’m the Canucks, I’m retaining 50% of Halak’s $1.5 million cap hit this season. The Canucks may even be able to pick up a mid-round pick if they take back a salary dump from a competing team.
This is why we included the Capitals. They have Michal Kempny making $2.5 million and bouncing between the AHL and NHL. He may be a player they want off the books. Including him may help the Canucks gain a decent draft pick.
Now, let’s get to the least-fun option.

Do nothing with Halak

Well, this wouldn’t be a lot of fun but it’s likely the betting favourite to happen.
Halak holds all the cards with his NMC. He doesn’t have to go anywhere. He’s earned the right and his agent negotiated well in his favour to get the NMC in his contract.
The Canucks can very easily be on the books for his $1,500,000 this season and then the $1,250,000 next year and potentially $1,500,000 next year if Halak gets his save percentage over 0.905 on the year.
Halak will get some starts as the season goes on but honestly, he doesn’t matter very much to this team anymore. Demko is going to be ridden like a horse in a western movie if the team is pushing for the playoff. If they are out of the playoffs, it’s likely that management and Canucks’ goalie coach Ian Clark want to explore the final option.
So let’s look at that final option.

As good as Martin looked in his three NHL games with the Canucks this season — he posted a .958 save percentage in those games — the strides he’s taken in Abbotsford working with Ian Clark’s protegé Curtis Sanford have been massive, and have him looking like a different goaltender than the one we saw at training camp and expected to see this season.
Essentially, the Canucks had no choice but to sign a backup, and Halak was a relatively safe bet on the off chance that Demko couldn’t handle a full NHL starter’s workload.
Martin has changed his game and hit a breakthrough with Abbotsford goalie coach Curtis Sanford and Ian Clark. There is reason to believe that Martin could potentially be an NHL backup next year.
That is what the Canucks organization needs to figure out as the backup to Demko for the 2022-23 season is relatively unknown. Martin looks to be in the fight but we need to see more NHL games for him.
Halak’s NMC means he can’t be sent down but it doesn’t mean he has to be in the lineup every night. The Canucks can carry three goalies and us Martin whenever they want to give him a start. With the AHL just down the road, it’s an easy transaction to bring up or send down Martin.
This would obviously not make Halak very happy about his situation but the Canucks need to see what they have in Martin if their playoff dreams go down the drain.
If the team continues to fight for a playoff spot, it’s all Demko and there may not be a question about the other goalie for the rest of the season. There is a small chance we see Martin during a playoff game — if the Canucks get there of course — if Halak gets lit up once again in the regular season. Those two back-to-back games of being pulled can’t become a regularity for Halak if he ever wants this team to trust him to give Demko a night off again.
Though it feels like Halak holds all the cards with his NMC, there are options for the Canucks organization and they need to think about what is best for this team moving forward.
Uncategorized
Recent articles from Faber