Analyzing what Jimmy Vesey will bring to the Vancouver Canucks 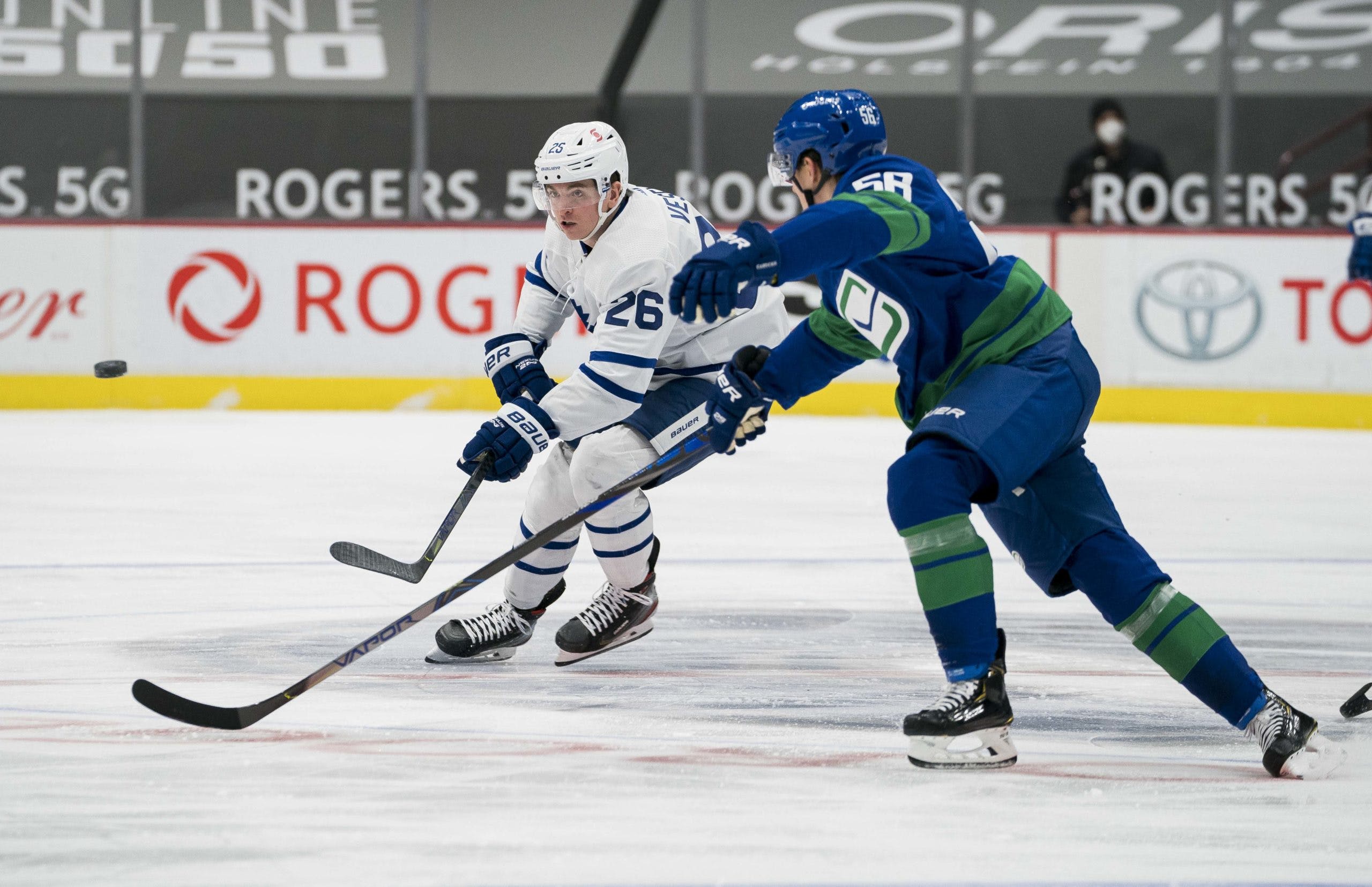 By Shu Lei Wu
1 year ago
The Vancouver Canucks claimed forward Jimmy Vesey on waivers Wednesday afternoon from the Toronto Maple Leafs to bolster their bottom-six depth after a string of injuries to Jay Beagle, Antoine Roussel, and Justin Bailey. The former Hobey Baker winner struggled in his time with the Leafs this season, posting five goals and two assists over 30 games while primarily playing in a third and fourth-line depth role on a deep Toronto team. He’s a much-needed addition to the Canucks’ forward group, however, whose lack of depth has been scrutinized to the ends of the earth.
To that end, Vesey is an upgrade on a bottom-six that severely lacks offensive punch. He was acquired for free and is on an efficient $900,000 contract — precisely the kind of shrewd move from Jim Benning that Canucks fans have been asking for.

Throughout his NHL career, Vesey has done most of his scoring at 5-on-5 rather than relying on the power play to boost his point totals. He has posted 117 points (94 of which came at 5-on-5) in 334 career NHL games, which is good for about a 29 point pace over a regular 82-game season. That’s a credible third-line pace and probably makes him one of the better wingers on the Canucks right now. In terms of scoring efficiency, we can break down his per60 scoring rates by season with the table below:

Via Natural Stat Trick
Vesey’s primary offensive threat comes from his shooting skills rather than his playmaking abilities, as he’s a career ~12% shooter that fits well with a pass-first centerman that can get him the puck in prime scoring areas. If you take a look at his shot map (shown below) from this year, you can tell that Vesey likes to take the puck to the net and get his shots off closer to the inner slot area: 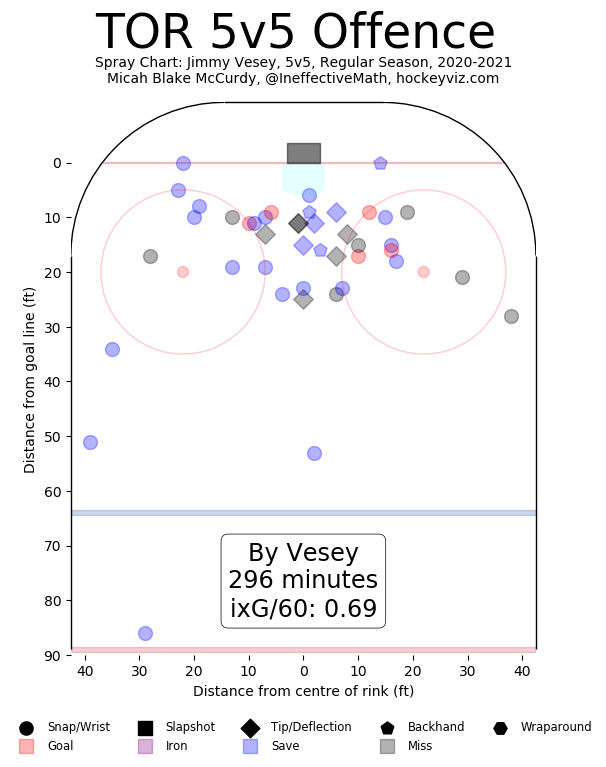 Via HockeyViz
His average shot distance at 5-on-5 over the course of his career is 24.6 feet, which is fairly close and that’s probably reflected by his relatively high shooting percentage (for reference, Brock Boeser’s career average shot distance is 32.3 feet). So in terms of Vesey’s goal-scoring abilities, he’s not an elite sniper who can beat goalies clean like Boeser. Rather, he gets himself into prime scoring positions to put the puck in the net from close range. In fact, he took advantage of the Canucks’ poor coverage on a transition play earlier this month for his latest goal:
As far as play driving is concerned, Vesey has yet to prove that he’s a play-driving winger at the NHL level. Historically, his teammates have generated slightly more offence while he’s on the ice compared to league average, but are also marginally worse off in the defensive end. 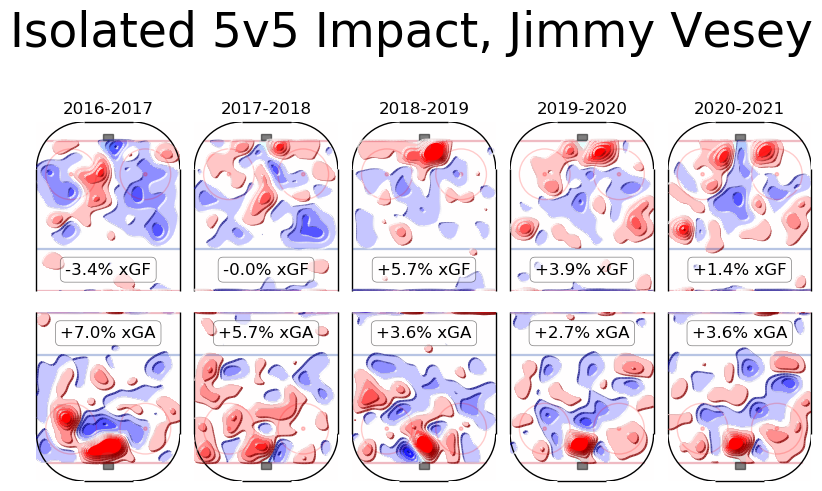 Via HockeyViz
Vesey’s ability to transition the puck out of his own zone and into the offensive zone is about average too, as shown below: 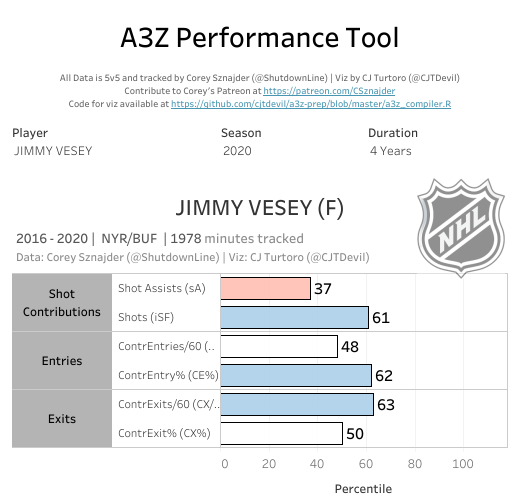 Via Corey Sznajder
We can tell from the graphic above that Vesey is a shoot-first type player who falls in the bottom half of NHL forwards when it comes to shot assists for his teammates. In terms of deployment with the Canucks, one might expect Vesey to slot into the roster on the third line in place of Marc Michaelis, but there may be some stylistic concerns to be wary of with Vesey and Sutter playing together, as both are shoot-first type players who don’t create a lot of scoring chances for those around them.

Vesey hasn’t played a big part of the power play in the last two years with Buffalo and Toronto but has experience playing on the second unit during his time in New York with the Rangers. Vesey could find himself thrust onto one of the Canucks’ power play units, but that might be more of a quick fix until the team regains its full health more than anything else. Given Pettersson’s injury and the fact that the temporary net-front presence on the top unit in Tanner Pearson left the Canucks’ latest game against the Senators early with an injury, Newell Brown might look to Vesey as a quick fix as the net-front option on the first unit. When he did play on the power play, Vesey usually took up the net-front position, as shown by his heat map below: 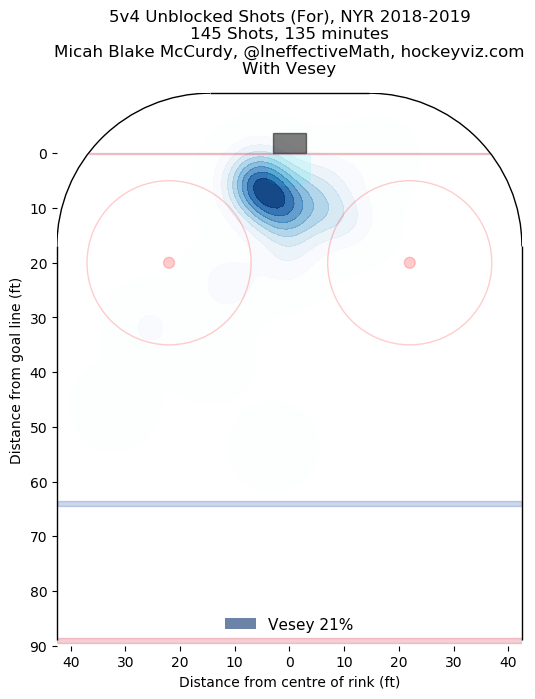 Via HockeyViz
Despite all the attention towards his offensive upside, however, Vesey has actually quietly carved himself a penalty-killing role the past few seasons. He played about a minute of shorthanded TOI per game in both Buffalo and Toronto and was an effective penalty killer in terms of suppressing quality chances against. 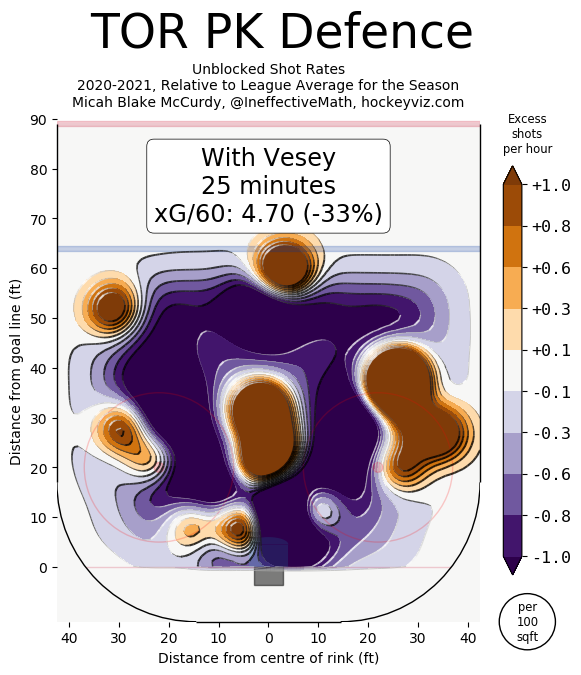 Via HockeyViz
I’ll caveat this by noting that Vesey’s secondary role on the penalty kill means that he most likely played against opposing second units, which are obviously less lethal than most teams’ first power play units. Still, he’s shown to be an effective penalty killer, and given Green’s preference for his bottom-six forwards to also be useful on the PK, Vesey’s versatility on this front is a nice addition to his scoring upside compared to some other depth players at Green’s disposal.

For a Canucks team that has been starved of production from its bottom-six, Vesey’s profile should be a good fit to provide some much-needed depth scoring. His addition also provides some useful maneuverability and flexibility for both the coaching staff and management should they pursue any mid-season trades by offloading the likes of Pearson for futures/draft picks.
Even if he doesn’t deliver on the offensive side of things, Vesey is a solid cost-controlled depth piece you want in your bottom-six, as he can stay afloat at 5-on-5, move up the lineup if needed, and provide some effective penalty killing. He’s the type of player that doesn’t move the needle all too much, but one that you’re happy to take a flier on for a $900,000 cap hit in a pandemic abbreviated season and who should have no problem contributing in a third or fourth-line role for the rest of the campaign.
Uncategorized
Recent articles from Shu Lei Wu