What happens if Nils Höglander forces his way into the top-nine? 6 scenarios coming out of Canucks Training Camp 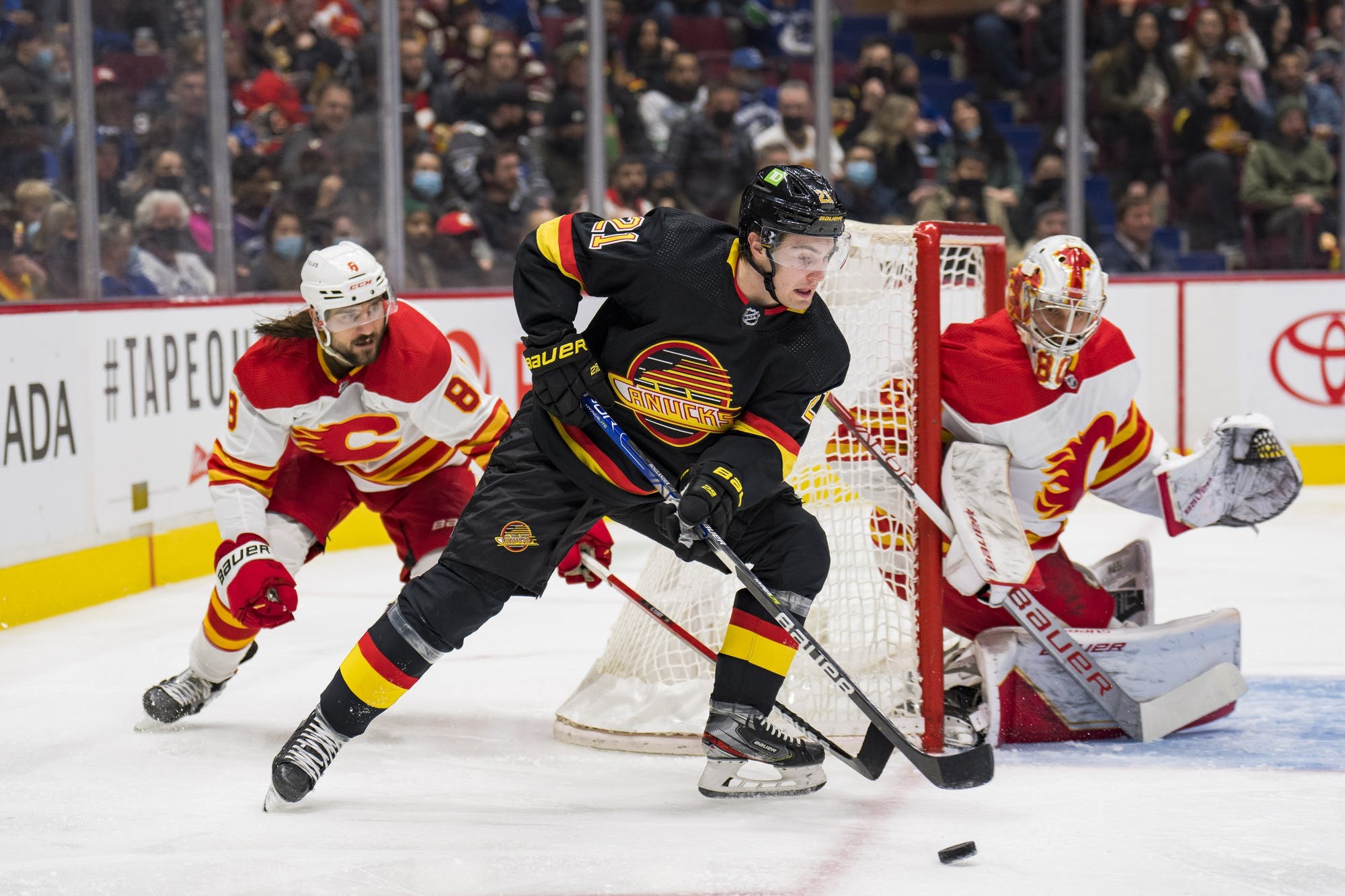 By Stephan Roget
2 months ago
When we polled our CanucksArmy readers a week back about which Canucks needed to have the biggest showings at Training Camp 2022, one name dominated the responses.
Nils Höglander.
One week into Training Camp, and on the cusp of preseason action, Höglander is still dominating, but this time he’s doing it on the ice.
No less than Bruce Boudreau has called out Höglander’s early excellence, pronouncing him the “best player on the ice” through the first few sessions.
Previously, Höglander had decidedly struggled to impress his bench boss. Now, he’s outduelling Elias Pettersson in drills and drawing praise for it.
Which is great news for Höglander, great news for his fans, and, honestly, great news for the franchise, which could definitely use some extra talent signed to cheap.
The only bad news is the ongoing and continued difficulty of projecting the Canucks’ opening night lineup. Many had counted Höglander on the outside of the top-nine — and perhaps the lineup — looking in, but his strong performance thus far has thrown a wrench into the works.
If Höglander continues to force his way into the conversation, what might be implications for the rest of the Vancouver forwards?
Below, we’ll discuss a few scenarios that could spill out of Höglander starting the 2022/23 season in the Canucks’ top-nine, and maybe even their top-six.

Another Forward Gets Bumped Down To The Fourth Line

The seemingly simplest solution to this non-problem is for Höglander to take the place of someone already penciled in to the Canucks’ top-nine, bumping that player down to the fourth line. Those aforementioned pencilees are Elias Pettersson, JT Miller, Brock Boeser, Bo Horvat, Conor Garland, Vasily Podkolzin, Andrey Kuzmenko, Ilya Mikheyev, and Tanner Pearson.
We can safely take the first five of those players out of the demotion conversation, but it still doesn’t leave us with a good fit. Podkolzin is on the rise, and will be pushing his way further up the lineup, not down. Kuzmenko is being counted on for his playmaking in the top-nine, and Mikheyev for his speed and defensive awareness. As free agent signings, relegating them to the fourth line might not send the right message.
That leaves Pearson as the best option, but even that strikes as unlikely. Pearson is one of the more reliable veterans on the team, and it’s difficult for a coach like Boudreau not to lean on him in tight game situations.
Placing Pearson — or even Höglander himself — on the fourth line also disrupts the organization’s plans for that unit. Currently, the team is trying out a fourth line of Curtis Lazar, Jason Dickinson, and Dakota Joshua, and they really seem to like that trio’s combination of own-zone coverage and frantic physicality. Adding Pearson knocks someone out — probably Joshua — and upgrades their skill while slowing them down.

Another Forward Gets Injured

The actual simplest solution, and probably the most likely to occur, is a preseason injury. If any of the other top-nine-quality forwards gets hurt between now and opening night, a spot in the lineup naturally opens up for Höglander without any shuffling required.
Really, what are the odds that the Canucks make it through two weeks of intense drills and a full slate of exhibition games without at least one injury? We’ll knock on wood to prevent any jinxing from occurring, but we’re still not all that optimistic.
Even if it’s a center that goes down, the Canucks can make it work, due to the possibility of any of Podkolzin, Lazar, Dickinson, or Joshua sliding up into the 3C position. Höglander fills a gap either way, and doesn’t need to force himself into anything — assuming it’s not he himself that gets injured, of course.

Another Forward Gets Traded

A trade might seem like yet another simple solution to a problem that isn’t a problem, but with the market being the way it is right now, “simple” is probably not the word to use.
Instead of demoting anyone, the Canucks could just trade a forward to make room for Höglander. But whom?
Pearson still makes the most sense, but he’s got another year after this one on his contract with an AAV of $3.25 million. The amount of teams that can even afford to add him at this point is slim, and chances are similarly slender that the Canucks could move him without retaining salary or adding a sweetener. They certainly wouldn’t be getting fair value back for him, and then that’s a subtraction to the quality of the team, because Pearson still brings a lot of on-ice value.
Dickinson could be another trade target, but his own salary and poor performance in 2021/22 makes that difficult and potentially costly. If he were moved, Lazar or Joshua could slide into center on the fourth line, but Pearson or another top-niner would still need to be bumped down.
The Canucks could really swing for the fences and flip one of Garland or Boeser for more help on the backend, but it might be a little late in the preseason game for that.

Maybe Höglander forces himself into an entirely different lineup. There were whispers of him being on the block all offseason, and his name has been attached to a number of different trade targets, including Ethan Bear and Nils Lundkvist.
But we’ve said it before, and we’ll say it again: trading a 21-year-old bursting with talent and coming off a sophomore slump is just bad asset management. There’s no way that a strong Training Camp is enough to rehabilitate Höglander’s value, and if the Canucks were to trade him, they’d be wise to wait until he performs similarly during the regular season. Selling low on a player with potential does not seem very likely to work out well, and could very easily work out quite poorly.

Is this a worst-case scenario? For many, it might be. Nothing sends a more contradictory message than announcing that there are jobs to be won in Training Camp, watching Höglander blow away the competition, and then sending him down to Abbotsford all the same, just because of his waiver-exemption.
It’s possible, of course. It could even be construed as shrewd asset management. But hockey players are emotional beasts, and this sort of stuff bothers them — and fans, too. If Höglander earns a spot on the team, he should have a spot on the team. If the organization put him on a line with Nils Aman and Linus Karlsson as a challenge to start camp, Höglander rose to the occasion, and he still wound up flanking those two in the AHL, wouldn’t that be frustrating for all involved?
We know we’d be annoyed.

The most outside-the-box scenario that we can come up with might also double as the best overall solution to, what we must continue to emphasize, is not actually a real problem.
The Canucks could just not worry about a top-nine. Instead, they could roll four lines in roughly equal measure, giving each of the units their own unique blend of offensive and defensive responsibilities and expecting big things from each.
Given Höglander’s performance early on, we can safely say that the Canucks have at least ten forwards on the roster worthy of a “top-12.” Then there are Lazar and Dickinson, who have each played up the lineup before, and Joshua, who Jim Rutherford identified as a potential third liner when he signed this summer.
No one stands out as a de facto fourth liner who couldn’t be expected to do more.
There is, of course, a downside, even with this scenario. Rolling four lines means less ice-time to go around, and the Canucks are already splitting time between three very talented centers in Pettersson, Miller, and Horvat. Is the coaching staff really going to want to take time away from any of those three and give it to another line? Probably not!
Any way you slice it, Höglander performing well in Training Camp is a good problem to have, even if it raises some roster-related complications. Still, it’s something worth keeping an eye on as the rest of the on-ice sessions unfold, and as the exhibition lineup cards start coming out.
It all has to come together sometime between now and October 12 — and one way or another, it will.
Editorials
Nation Takes
Recent articles from Stephan Roget