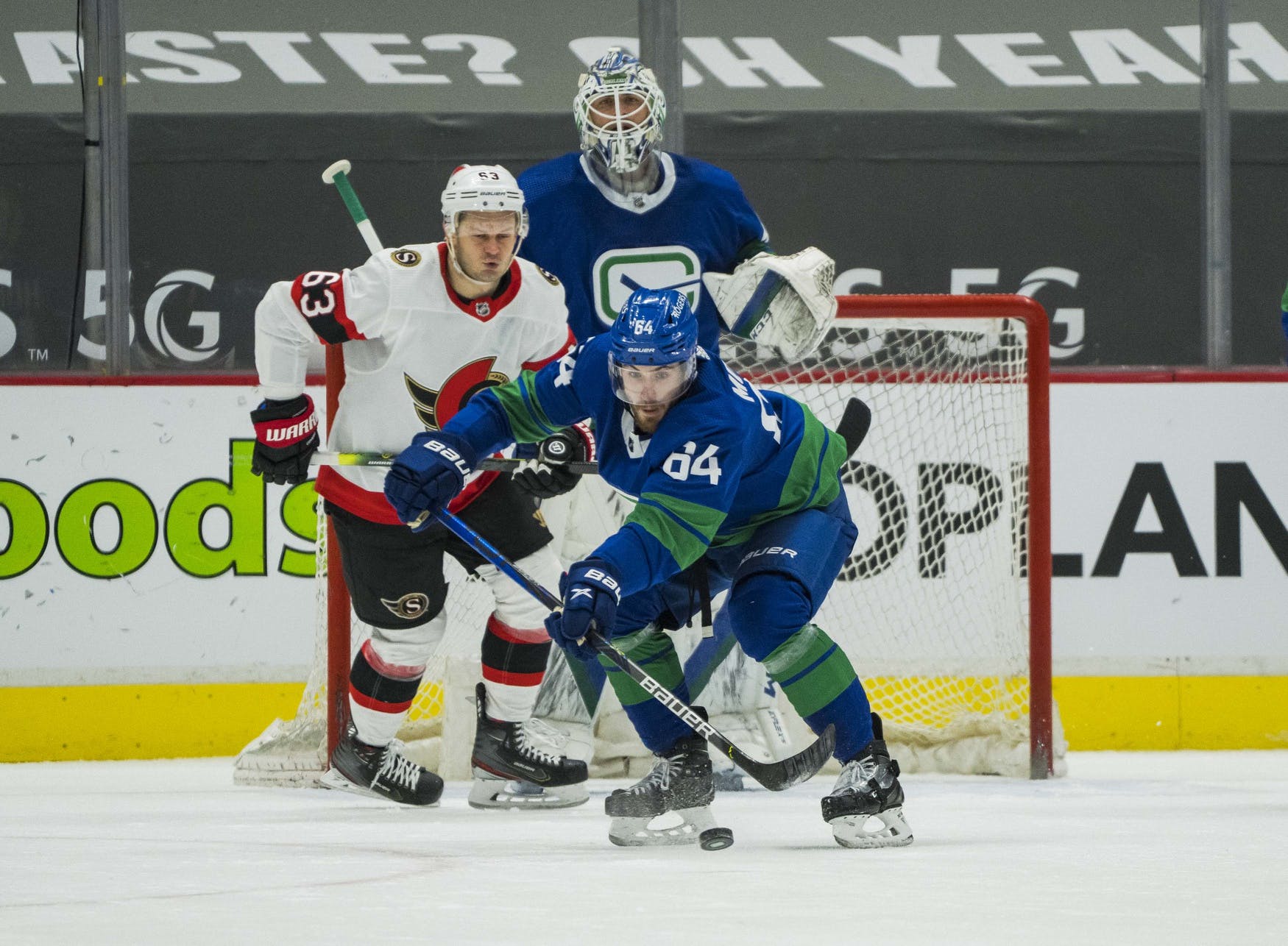 By Lachlan Irvine
1 year ago
There’s a lot of problems plaguing the Vancouver Canucks right now, but there’s one issue on the ice that clearly stands above the rest: the penalty kill.
The Canucks’ success rate shorthanded currently sits at 62.3%, on pace to finish with the worst penalty kill in NHL history since the stat began being tracked in 1977-78. They sit a full 3% behind the second to last Winnipeg Jets, which may not sound like much but it’s not easy ground to make up without some absolute shutdown games.
The Canucks have had a bit more success with their four man unit in recent outings, allowing just a single power play goal over their last three games. Sure, they didn’t take a single penalty against Winnipeg and both the Penguins and Blackhawks have atrocious power plays, but hey. Baby steps.
The one good thing about having a historically bad penalty kill is that it usually doesn’t take a complete teardown to improve. Going from last to first might be out of the cards, but with some proper adjustments and a little bit of better luck, you can at least attempt to catch the first team in front of you.
And luckily for the Canucks, the perfect teachers stood directly across the ice from them last night; the Pittsburgh Penguins, who currently own the NHL’s best penalty kill with a staggering 89.8% success rate. Vancouver also shares a division with three teams in the league’s top six, the San Jose Sharks (88%), Calgary Flames (87.7) and Edmonton Oilers (86.4).
There’s a lot Vancouver can learn from these teams for how they approach shorthanded situations, from player choices to on-ice strategy. So let’s take a look at the differences between some of the best penalty-killing teams in hockey and the Canucks, and what Vancouver can incorporate from teams like the Penguins into their own game plan.

The first step to figuring out what’s wrong with your PK is by reevaluating the players you’re using. While the defence at the Canucks’ disposal is a little more set in stone, the forwards are where some real differences can be made.
Every team has their set penalty killers, and according to Evolving Wild the top six teams have used five forwards on average, each with over 20 minutes of shorthanded ice time. The Canucks have just three over that threshold: J.T. Miller (45.53), Juho Lammikko (34.75) and Jason Dickinson (29.87).
But what stands out among the majority of the top units are the names they’re using. Rather than using largely depth role players, a lot more teams have begun to lean on top six forwards to kill penalties than in years past.
Take the Carolina Hurricanes for example. Of the seven forwards they’ve used for their third place shorthanded unit, six of them also currently sit on the Canes’ top ten list in points. Among the leaders are Sebastian Aho, Teuvo Teravainen and Martin Necas, all of which have played regular minutes on the PK and not taken a hit offensively because of it.
And it’s not just Carolina using their stars in pivotal defensive roles. The Oilers have ran a PK featuring Ryan Nugent-Hopkins, Zach Hyman and Kailer Yamamoto for most of the year, the Toronto Maple Leafs have used leading scorer Mitch Marner for over 40 minutes of shorthanded time, and the Sharks have employed Logan Couture and Tomas Hertl for large chunks of their penalty kills.
The Penguins employ a more old-school approach with the forwards in their penalty kill, with Brock McGinn, Teddy Blueger, Zach Aston-Reese and Brian Boyle all playing pivotal roles. But even Pittsburgh’s depth role players have a larger offensive impact than most, with McGinn, Blueger and Aston Reese combining for 24 points, including three from the Pens’ third goal against the Canucks on Wednesday.
Compare that to the Canucks’ PK. Despite using leading point getter J.T. Miller more than any other forward, Dickinson and Lammikko have just four points between them. Outside of the top three, the Canucks have largely used a rotating cast of depth role players including Tyler Motte, Justin Bailey and Matthew Highmore.
While goals and assists aren’t a direct way of telling you which players are also good defensively, it does warrant asking why some of Vancouver’s more talented options haven’t gotten a crack at regular shorthanded shifts. Two players who could potentially make a real impact at 5v4 immediately spring to mind: Nils Höglander and Vasily Podkolzin.
According to Natural Stat Trick, Höglander and Podkolzin rank first and third respectively among all Canucks forwards in PDO, a stat that combines a team’s shooting percentage and save percentage while a specific player is on the ice. Both wingers play an aggressive style of defense that focuses on quickly tracking the puck carrier and forcing board battles, which fits the needs of a high forward in the PK’s box formation perfectly.

Speaking of formation, the penalty killers a team has at their disposal has to mesh with the strategy they use, otherwise it’s all for naught.
This might be where the biggest disconnect of all lies for Vancouver. The penalty kill plan and the skaters on it do not mesh at all.
The standard box and diamond formations most teams use for penalty kills requires a firm balance of stable defence and quick adjustments that can adapt to the situation around them. Where the Canucks unit struggles is in those evolving details, with the defenders not able to make snap decisions and often getting caught flat-footed because of it.
Nearly every power play goal the Canucks allow happens in one of two same fashions; either from a missed assignment getting a high danger chance, or the defence standing still as their opponents set up a quick passing play around the perimeter.
On the flip side, the Penguins’ PK ebbs and flows to match their opponents style of power play, and often involves keeping one player on the puck carrier, sometimes all the way back to their own end.
Let’s take a look at the game tape.
The Canucks only got one decent chance at setting up during their sole power play opportunity yesterday, and the Pens’ penalty kill quickly assumed control of the puck. But rather than immediately slap the puck back into the Canucks’ end, Evan Rodrigues bleeds a few precious seconds off the clock before lightly flipping the puck into the corner.

But it wasn’t just the zone exits where Pittsburgh exercised its skill. They also made an effort to pressure whichever Canuck was preparing the breakout. This type of penalty kill makes it much harder for teams on the man advantage to set up, and often leads to panicked passes or low danger shots under pressure.

Of course, the Canucks don’t have nearly the amount of fleetfooted skaters on their shorthanded units to make these types of plays. That fact not only provides more reason to look towards their young gun forwards to fill roles, but also to put a bigger emphasis on finding more puck-moving defensemen to fill in gaps on the blue line in the future.
The Canucks have a long way to go before their penalty kill can get back to being an asset rather than a liability. But with the right changes, they could at least hang their hat on no longer being the worst in recorded league history.
Better start preparing the banner now.
Uncategorized
Recent articles from Lachlan Irvine