‘We care a lot about this team’: Daniel and Henrik Sedin are joining the Canucks again and are ready to do meaningful work 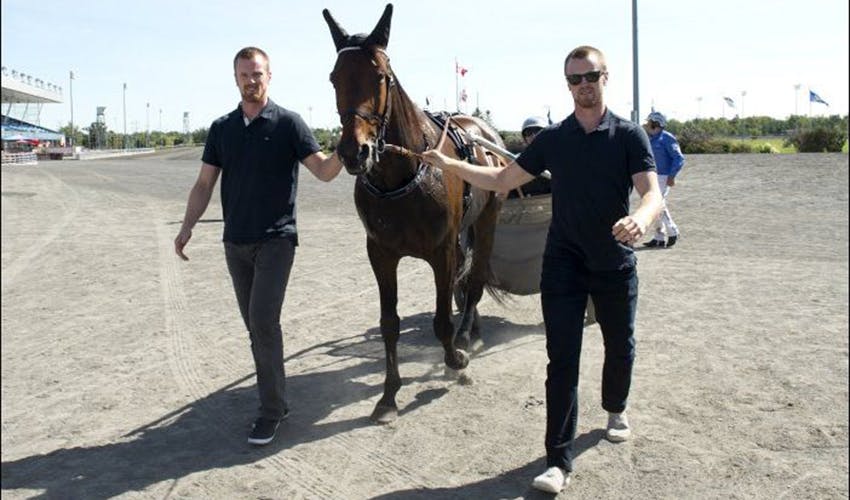 By David Quadrelli
1 year ago
Two familiar faces took the podium at Rogers Arena this morning and breathed a breath of fresh air into a largely disgruntled fanbase.
Yesterday, the Vancouver Canucks announced Daniel and Henrik Sedin as Senior Advisors to the General Manager, and today, they spoke publicly for the first time since Sedin week way back in early 2020.
The burning question on everyone’s mind is simple: why do two players with an estimated career earnings of $74,164,500 each and more fame than any Vancouver-based athletes have ever experienced want to come back now?
The answer from former captain Henrik Sedin was simple.
“Our only answer is that we care about this team. We said after we were done playing that this is a side of the game where I think we can help them. We’ve taken our time. We care a lot about this team so to be able to come back and help is a great feeling.”
The Sedins retired at the conclusion of the 2017-18 season and are hands down the most decorated players in Canucks history.
“We care about his team, care about the people that work here, and that’s the number one reason — the only reason — we came in,” added Daniel. “We want to do a good job and that’s been our mindset from the first day we came here years ago so we’ll do the same in this role and we’re looking forward to seeing this side of the business it’s gonna take a lot of learning. We’re aware of that, and we’re 100% committed.”
Some viewed this as a PR stunt for an organization desperately trying to make its fans forget the abysmal season they just had, but everyone who spoke at Rogers Arena today made it clear that the Sedins are here to do meaningful work.
“The conversations we’ve had already from a team-building standpoint to get their ideas, their perspectives on what they think we need to take the next step I think it’s been very important,” said GM Jim Benning. “It hasn’t really been talked about yet but the mentorship that, you know, knowing this market, with our young players. They were great two-way players when they played, and with our young players, it’s about learning the details of the game to be better defensively and I think, you know, when they talk to young players you know given the great careers that they had, the younger players are going to take what they say to heart.”
When asked if he’d be open-minded to the Sedins’ opinions, Benning made it clear that their voices would be heard in the decision-making processes moving forward.
“Even, you know, the conversations that we’ve had so far, like they’re humble guys, but they’ve followed the league the last couple of years and they’ve kept up with the team. You know they’re excited about the young pieces that we have in place, the young core group. And now it’s about trying to get this young core group to the next step. They want to be part of that. I’m very excited that they joined us today and you know they’re not that far removed from the league so they still know a lot of the players in the league, they know what winning teams look like. I’m going to be listening to that and they’re going to be a big part of our decision making process moving forward.”
The Sedins are ready to do meaningful work for the organization, which has an incredibly busy offseason featuring free agency, an expansion draft, and the amateur draft, all still ahead of them.
“We don’t take this lightly. We didn’t want to come in and just come in because of our names,” added Daniel. “We’re rookies, we don’t want to come in and take a role that we don’t believe that we can help in.”
Uncategorized
Recent articles from David Quadrelli