WDYTT: What is an appropriate price for J.T. Miller on the trade market? 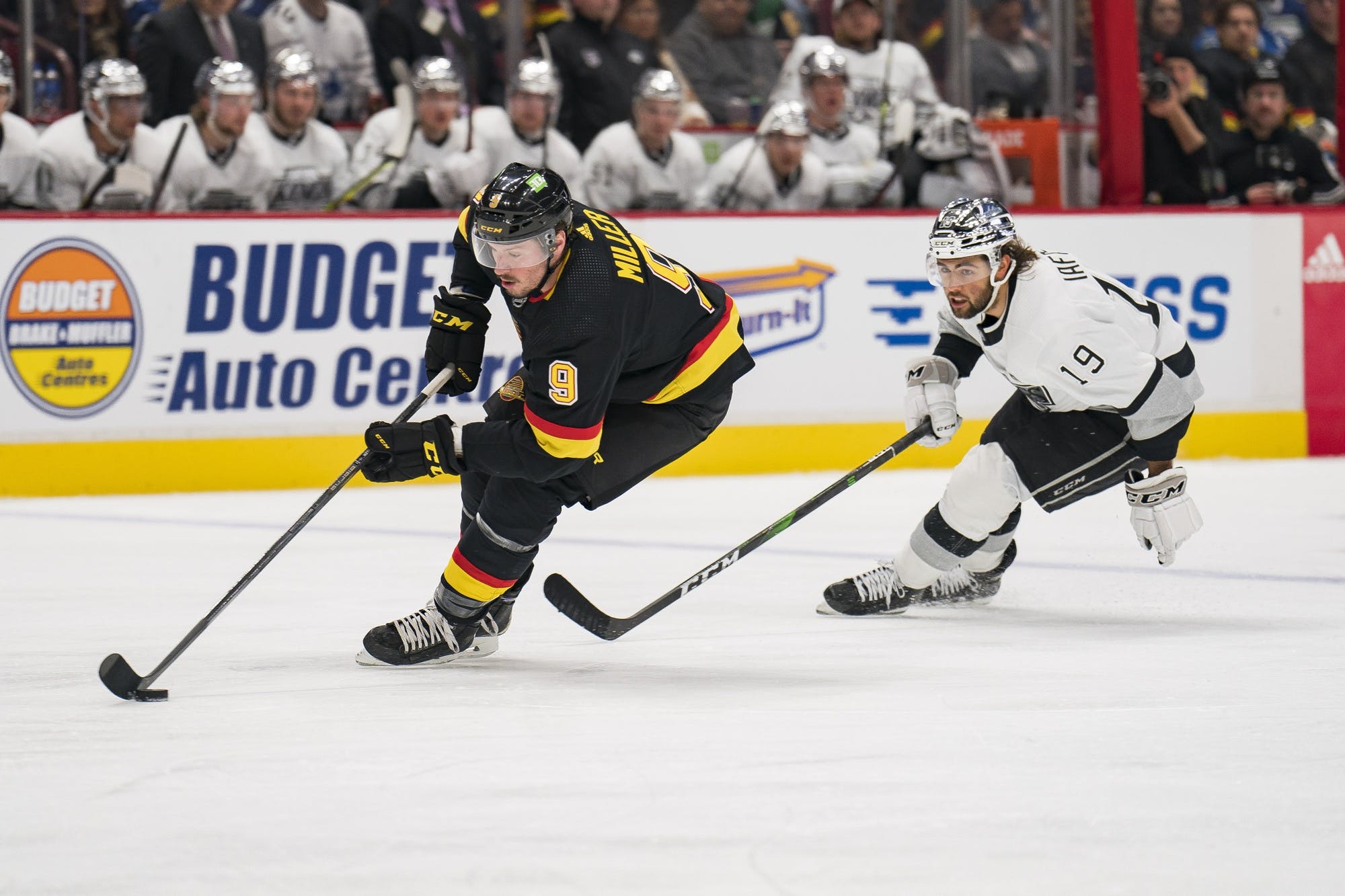 By Stephan Roget
8 months ago
Welcome back to WDYTT, the only hockey column on the internet that has never before considered trading J.T. Miller.
Speaking of trading J.T. Miller, we’re considering it, and so, from the sounds of it, are the Vancouver Canucks. Not only has POHO Jim Rutherford made more than a few hints that the Canucks are more than open to moving Miller this offseason, we’ve recently got word of what was being offered the last time Miller was on the market, circa the 2022 Trade Deadline.
Now, most of us can agree that an offer of Nils Lundkvist, Filip Chytil, and a mid-first round draft pick is pretty lacklustre when it comes to landing a player like Miller. But everyone has their price, and you, loyal readers, are no different.
So, this week, we’re putting you in Patrik Allvin’s seat, and asking you:

What is an appropriate price for JT Miller on the trade market?

Who is your favourite Canucks’ head coach of all-time?

You answered below!
Sandpaper:
Bill LaForge.
Burnabybob:
(Winner of the author’s weekly award for eloquence)
I’m still partial to the “Mighty” Pat Quinn. He wasn’t the best coach they ever had, and he wasn’t even the best GM, but I generally have fond memories of his years in the organization, which finally gained respectability under his tenure. The 2011 Canucks were the best Canuck team, but the 1994 playoff Canucks were the most fun to watch.
Forward thinker:
Pat Quinn was my favourite. Liked him a lot as player. Loved him as a coach. Loved him even more as GM.
After him, I liked both Vigneault, Nielson, and Crawford. All were great coaches but different styles.
KGR:
While Harry Neale may not have been the best coach, he had the best one-liners and is a wonderful person. I have never forgotten, paraphrased: “We cannot win on the road or at home; my failure as a coach is not finding another place to play.”
KevinMW:
Probably Vigneault, because he was the coach when I first started cheering for the Canucks, and when they were having their glory years with the Sedins.
Also, his personality shone through. I remember him cracking up when Vernon Fiddler did an angry Kevin Bieksa impression in front of the Canucks bench. One of my favourite ‘bonus feature’ moments in hockey.
Kanucked:
Alain Vigneault. His history, even outside Vancouver, is similar to the Canucks. Never won the Cup, but went to the finals.
Kanuckhotep:
The one who brings home the Stanley Cup to Vancouver.
harrythehammer27:
My vote is Big Pat Quinn. Close second is AV. Didn’t mind Crawford while he was here, but still will never forget when he had Gretzky sitting on the bench during the shootout at the ‘96 Olympics.
DeL:
Vigneault and Quinn, it’s a tie. Both took the team to Game Seven, so that’s got to be worth some votes.
Fred-65:
I can honestly say Vigneault. He was the only coach who I enjoyed listening to in post-game comments. Always made me smile.
SweetLeaf:
AV, then the Irishman, then the Crow.
A River Named Curt:
Gotta go with the technologically-innovative and ever-colourful Captain Video himself, Roger Neilson. A HHOF builder, he took over as Canucks interim coach after Harry Neale got into a physical altercation with a fan during a brawl with the cheating ‘Diques. After the team went unbeaten in the next seven games Neilson was made head coach permanently and took Vancouver to its first Stanley Cup Finals against one of the all-time great teams, Mike Bossy’s Islanders. His stunt waving the white towel in Chicago during the conference finals to protest the poor officiating led to his ejection from the game and 10,000 fans waving towels at the next home game. There’s a reason there’s a statue of him of outside of Rogers Arena.
Defenceman Factory:
Pat Quinn calling out Don Cherry for saying Bure was soft and that a Canadian would be playing through such a minor injury endeared him to me as a coach.
BoHo:
Bruce Boudreau!
Bruce, there it is!!!
HockeyFanMexico:
Rick Ley (just kidding).
Easy answer is Quinn, but, really, I still think that Alain Vigneault is one of the best coaches in hockey (although after the Rangers, it has been tough). I remember an interview with him where he was talking about how stressful it was behind the bench of the Habs, and this time around he just wanted to have fun as well as success. The fits of giggles and throat lozenges, just classic! When asked what his strategy was in any given game, he would laugh and say “go Loui go.”
CRobinson:
I liked Alain Vigneault, he had a good system in place that helped lead them to the finals. However, purely for entertainment purposes… Tortorella’s after-game antics and frustration with reporters was always amusing. I especially enjoyed his hallway brawl with Calgary, even though it was an embarrassing day for Vancouver. I knew after that his days were numbered.
pooploch:
Favourite?
I’ll have to be on the Pat Quinn bandwagon. Ironically, for some of the same reasons people generally like Boudreau. (self-explanatory)
Alain Vigneault is up there as well. Alain may have been the best coach this city has seen, and after Green was let go, part of me was thinking about his situation in Philly. I still think he may end up back here, but can’t provide any reasoning for that other than gut feels.
Ummmm.. really:
There’s a difference between favorite and best coach…
Favorite: Pat Quinn.
Best: Alain Vigneault.
Fun to watch: Mike Keenan, never knew what that dude would do.
Most overrated: Marc Crawford.
TheRealRusty:
Travis Green. Because he was humble to a fault, always got the best from his players, and had his teams playing with such structure. I kid.
LiborPolasek:
Quinn or AV, just for the way they handled the media.
canuckfan:
Pat Quinn changed the organization on and off the ice. Quinn created an atmosphere where players were proud to be Canucks, and wanted to make Vancouver their home. Orland Kurtenbach was also a great coach. Their success came from their vision and leadership abilities.
Ragnarok Ouroboros:
Quinn is my number one pick. I always admired how Pat Quinn managed the team and coached it at the same time. I first because a hockey fan when Pavel Bure and the Canucks made the Stanley Cup Finals against the Rangers, so I have a fondness for that time period.
Alain Vigneault would be by next favorite. Canucks were always one of the best teams in the league under him, until the players aged out.
Crawford is my third pick. He had that great scratchy voice, like a teenager whose voice is just starting to crack. Loved the Westcoast Express under Crawford, when Naslund and Bertuzzi were at their peak, and Kesler and Burrows were just starting to light it up.
RooblinDooblin:
How can it not be Roger “Towel Power” Neilson?
Uncategorized
Recent articles from Stephan Roget