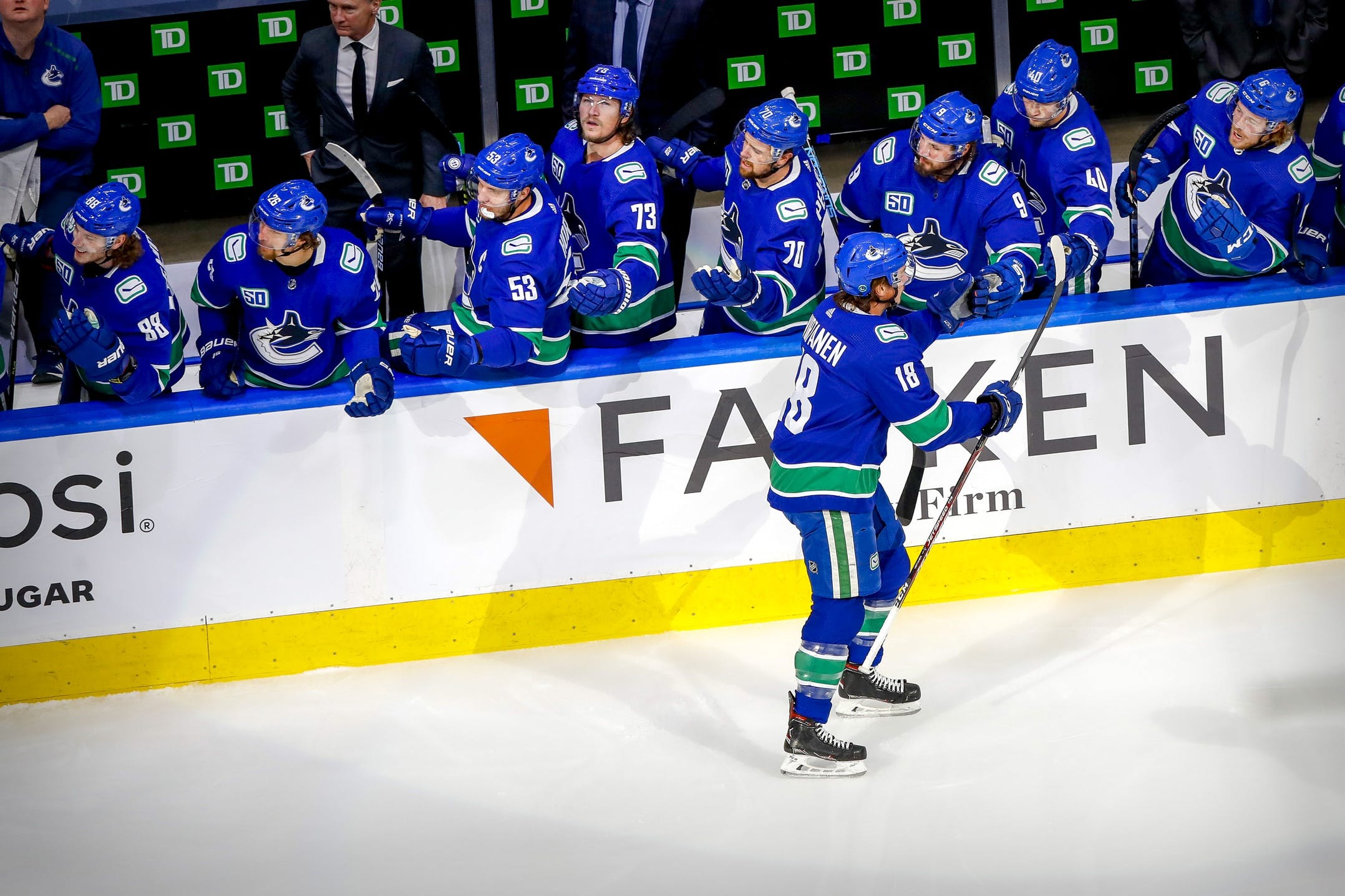 By Stephan Roget
2 years ago
Welcome back to WDYTT, the only hockey column on the internet that always shows up to camp in shape.
Speaking of which, by the time you read these words, training camp will be well underway, and we’ll be less than a week away from actual, genuine Vancouver Canucks hockey.
And with no exhibition games on the schedule this year, said training camp will be the sole determiner of who makes the active roster, who gets shuffled to the taxi squad, and who’s waiting in February for the Utica Comets to start their own truncated season.
In other words, expect this to be the most competitive Canucks training camp ever, and that’s without mentioning the extreme fluidity of the depth chart for 2021.
Some players are going to win jobs in the next week, and some are going to lose them. There are roles to be had in the top-six, the top-four, and even in the crease. In fact, there might not be a single line or defensive pairing set in stone at the moment.
Which makes this a perfect time to get you all to chime in.
This week, we’re simply asking you:

What is your opening night lineup for 2021?

(Feel free to post your whole lineup, or to focus on one specific part)

Last week, we asked you to:

Make your official hockey- or Canucks-related predictions for the year 2021.

Your responses, which will be revisited at the end of the year, are below!
Sandpaper:
Ferland will be placed on LTIR and will never play again, Juolevi becomes a solid minute-muncher, and Canucks fall short of playoffs by three points ending up 6th in division.
Killer Marmot:
(Winner of the author’s weekly award for eloquence)
I’d prefer to make predictions about the 2019-2020 season, but here it goes:
o Boeser will return to form as a top sniper.
o Juolevi will slot into the third pairing out of training camp and make it look easy.
o Motte will prove that he can play offence.
o Late in the season, the daunting line of Podkolzin-Horvat-Virtanen will form and terrorize the opposition for a few seasons at least.
o Holtby will find some of his old form and prove a solid goalie.
o Demko will often look good but struggle with consistency.
o Both Eriksson and Beagle will get flipped in and out of the lineup.
o Rathbone and Hoglander will play much of the season in the AHL, but still see some NHL ice time.
o Fin will tire of salmon and children, and become vegan. This will cause his dorsal fin to get all floppy.
o It will be revealed that Elvis faked his death so that he could realize his dream of being Canucks’ GM.
wojohowitz:
The Canucks will start the season by losing all four games in Alberta and they won`t get past game one without injuries. They will utilize a dozen defensemen through the season and before it`s over someone will post; ‘They could really use Stecher right now.’ They won`t be making the playoffs and that old familiar excuse will be used ad nauseam; Injuries, injuries, injuries. Benning will get an extension but Green will be blamed and fired because of their lack of depth.
Kootenaydude:
Canucks miss the playoffs by one point, but all is not lost. Canucks get some lottery luck and move in to a top-three draft pick.
J-Canuck:
I think this will be a very interesting season, starting with the Canucks finishing in the top-three of the Canadian Division. The Eastern teams will finally get a taste of the travel that the Canucks deal with constantly, which will be nice! I believe the top-six will continue to score, the PP will be top-ten, and the PK will improve! Also, Demko takes the #1 goalie spot by game 20.
DogBreath:
(Winner of the author’s occasional award for already being partly right)
The Canucks sign one of Hamonic/ Vatanen at the start of the season, shoring up their D. Juolevi and Rafferty get worked into the lineup and prove useful. The Canucks, however, run into injuries to the top half of the line-up and they miss the playoffs. In the process:
Green is signed for another 4 years.
Juolevi proves he can challenge for a top-four position next year.
Gaudette can’t make the jump to 3LC, is moved to the wing and forms part of the top-six, leaving a huge question mark at 3LC to fill next year.
Virtanen improves, but still not a solid top-six and is dealt at the deadline.
As the Canucks are out, Sutter and Benn are dealt at the deadline for late-round picks
Hoglander and Podkolzin make their debuts, Podkolzin fits with Horvat in the top-six, Hoglander requires more work on his game and starts next season in the AHL before making his NHL debut by next Xmas.
Rathbone plays in the AHL and excels, setting himself to be part of next year’ lineup.
Demko proves he’s a top-15 goalie this season.
Hughes and Pettersson are resigned to bridge contracts.
Michaelis is a pleasant surprise and presses Beagle for 4LC at the start of next year.
40years:
The Canucks become “Canada’s Team.” Green and Benning get well-deserved new contracts. It’s a great year to be a Canuck fan.
Holly Wood:
I think the Canucks receive solid goaltending from Demko and Holtby. QH and Nate Schmidt’s play surprises us all and turns the Canucks into a much quicker transition team than we have seen in the past. Edler’s play slows down, but he provides steady influence to the young D. Benn, Juolevi, Rafferty, and Rathbone rotate through the bottom pairings in the early going with Juolevi becoming a fixture around the 20-game mark. Virtanen comes to camp in good shape, plays his way into the top-six, but still leaves us wanting more from him. Boeser comes clean on a wrist injury and regains his scoring touch. Pettersson, Miller, and Hughes really deliver once again. The bottom-six wear down early due to the condensed schedule and Canucks struggle with holding leads and the PK.
Overall, they squeak into the playoffs, tightly grouped with Calgary and Edmonton. A lengthy injury to Hughes, Schmidt, Demko, Horvat, EP, or Miller could be disastrous.
Every team struggles with the schedule and injuries become commonplace. Taxi squads are used extensively.
Bud Poile:
It’s a developmental year awaiting the veteran contracts dump.
I hope fans understand the team will be in a much better position to seriously contend then.
The team needs another veteran RHD, so let’s hope Ferland’s LTIR provides that opportunity.
If so, we’ll see another year of competitive hockey with first round playoff potential.
Kevlar73:
Canucks make the playoffs, and continue to be one of the highest scoring teams in the NHL.
Goaltending is not an issue as Demko takes a step forward and Holtby shows well in front of a better overall team defence.
Petterson and Hughes continue to drive this team forward.
Finally, Hoglander and Podkolzin both do not make an impact this year, with Hoglander going to Sweden for one more season.
Uncategorized
Recent articles from Stephan Roget