WDYTT: Canucks matchups to look forward to this season 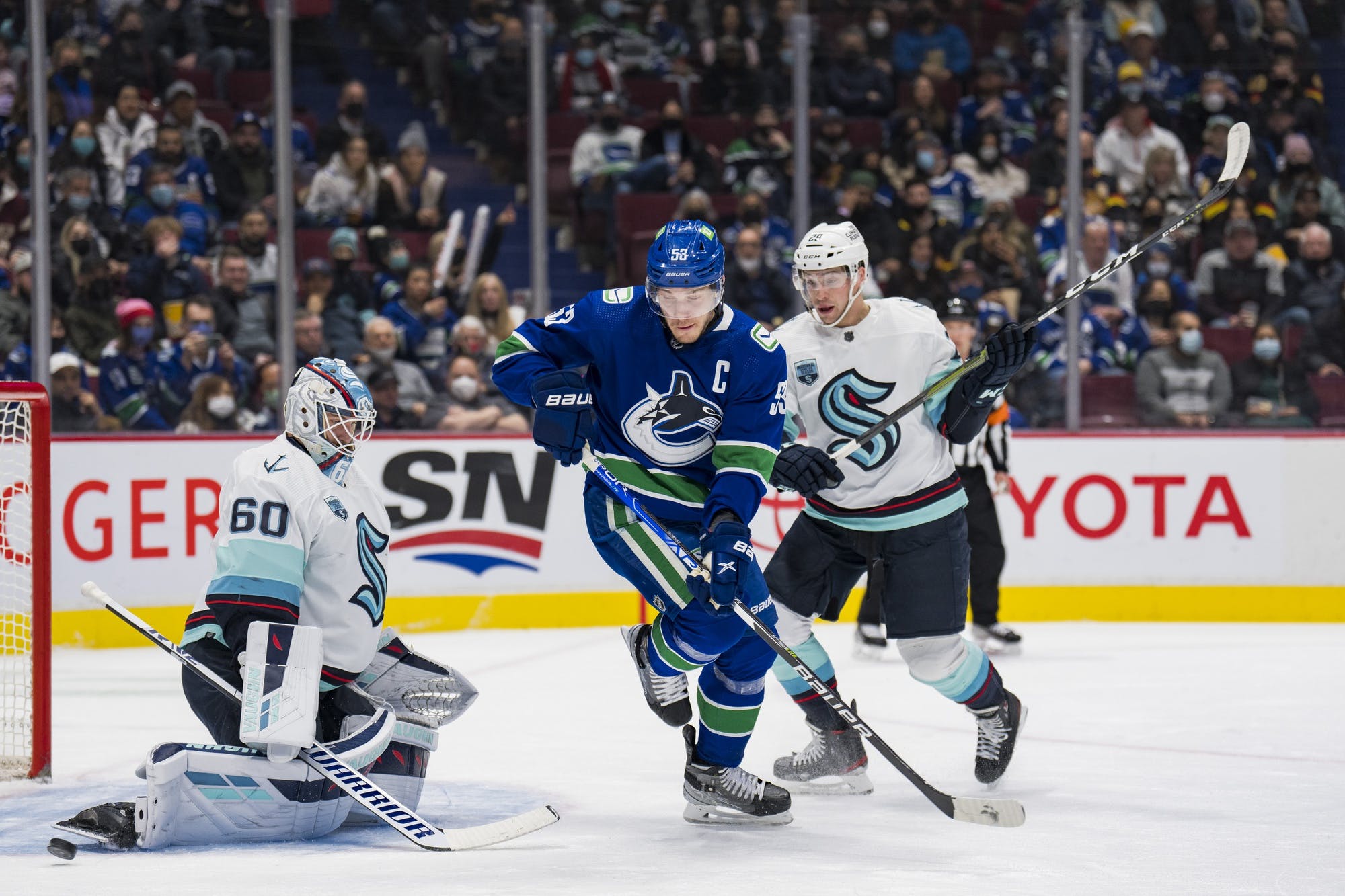 By Stephan Roget
3 months ago
Welcome back to WDYTT, the only hockey column on the internet to have met Bill Huan in person.
Speaking of burgeoning greatness, the 2022/23 season is nearly upon the Vancouver Canucks. As you read these words, we’ve just crossed over into September, which means that Training Camp is starting, exhibition hockey will follow in weeks, and real, actual regular season game action is only a month and change away.
The Canucks are slated to play 82 games this season, starting with an October 12 away game against Edmonton and finishing up with an April 13 barnburner in the recently named Mullet Arena in Tempe, Arizona. Truly, a cosmopolitan world tour in the making.
We don’t yet know what the final shape of the Canucks roster will be, nor exactly what direction the team will head in this 2022/23. Several key overarching themes of this season’s main story arc are still being worked out.
Sometimes, it’s hard to get excited for something with such narrative ambiguity, but it’s important to remember that, no matter what, every regular season is nothing more than a collection of 82 individual hockey games.
And individual hockey games are always easy to get excited for.
The Canucks will face off with each of their 30 fellow NHL teams at least once this season, but not all matchups are created equal.
Are you more looking forward to a bout with the new-and-improved Calgary Flames?
Or the upcoming rivals-in-the-making down in Seattle?
Stoked for the multi-year, very-occasional grudge match with the Florida Panthers to continue?
Eager for another chance to boo the Chicago Blackhawks?
There are a lot of games worth getting hyped about on the 2022/23 schedule, but this week, we’re asking you to narrow it down to one:

Which team matchup are you most looking forward to for the Vancouver Canucks in 2022/23?

What are your favourite memories of new HHOFers Henrik Sedin, Daniel Sedin, and Roberto Luongo?

(A small and appreciated handful of) you answered below!
Rob:
(Winner of the author’s weekly award for eloquence)
There are so many… Hank/Danny walk-off OT winner in their final home game inluded… but the one that stands out the most for me happened on April 10, 2010.
I live in Calgary and was out bar-hopping for my birthday. Every one of them had the Canucks/Flames games on. Henrik Sedin was in a close race with Ovi and Sid for the Art Ross. Going into the last day of the season they were all around 108 points.
The Sedins went off…
Daniel had 3 goals and 1 assist, Henrik had 4 assists, and the night was capped off by the goal of the year. Ehrhoff slap-pass to Henrik, who no-look touched it between his legs straight to Daniel down low, who then proceeded to put the puck and his stick back between his legs and score short side. I don’t think I can post a link to a video here, but you know the one.
I was the only person in the bar wearing a Canucks jersey surrounded by a sea of red. The place went stunned silent as they showed the replay. I was 3/4 gone and losing my mind.
Henrik sealed the Art Ross and the Hart Trophy in the most devastating fashion imaginable. For anybody questioning the legitimacy of the Sedins, it was a statement served ice cold. To this day it was one of the most beautiful hockey games I have ever seen and I believe it was the Sedins’ best game of their career.
Ragnarok Ouroboros:
(In reply to Rob)
Just had a look at it, and you were right, that was an amazing play. Nothing shows the Sedin radar better than that no-look tip-pass Henrik did to Daniel. Amazing.
A River Named Curt:
I’d also have to say the between-the-legs goal by Danny off a little touch-pass by Hank against the Flames to end the ‘09/10 regular season, as well. I think they had 7 points that game.
For Luongo, the infamous bathroom break playoff game in the Western Conference semi-finals against eventual Cup winner, Anaheim, in ‘07. Even though Anaheim eventually won in double-overtime, Luongo made 56 or so saves, many of them other-worldly.
LiborPolasek:
Lots of good memories, but the memories I remember most occurred during the 2011 Cup Finals: Sedin doing the tango with Marchand and Luongo crumbling, when it mattered most vs Thomas. I feel that Thomas gained more confidence, with his teammates, as the douchery increased — due mainly, to the zebras putting the whistles away.
Anyways, all three deserves to be in the HHOF cause they were each one of the best (regular season) players of their generation. Bravo to the twins and Luongo (regardless of how he felt and left as a Canuck). Would have really liked the twins to have been the ones to hoist the Canucks’ first Cup, ‘cause they definitely gave it their all, but it just wasn’t meant to be for them. PERHAPS, as Canuck executives, they can achieved where others have failed.
HockeyFanMexico:
I have a lot of respect for all three of these guys. Honestly, the two moments that always spring to mind are Luongo’s “pumping tires” comment that literally ignited Tim Thomas and when Henrik was getting repeatedly punched in the face with zero Canuck response, and both of those things cost the championship. Not fair, yes, but it’s how I have always felt. \
However, these guys deserve the honor and this is about the positive moments. Luongo coming to the rink for the first time and just save-after-save-after-save, the Louuuu chants after every save; just epic to be there, game after game. The save made just before the golden goal in 2010. The Twins in Toronto with Bob Cole “they are killing their own penalty, THEY SCORE, it was just a matter of time.” Really, seeing them break out on the Canadian Stage as true superstars of the NHL. Something we knew but the rest of the country did not… yet. The Children’s Hospital donation hours after signing an extension. Truly remarkable players. Not many players in the history of the NHL have changed the way the game is played like they did. An example being the hard pass off the end-boards to beat out the icing onto the stick of Daniel. Something you never saw before, but have many times since from many teams. I am blessed to have been able to follow their career from start to on-ice finish.
Kootenaydude:
Luongo’s first game made me a happy guy. We hadn’t had a good goalie since McLean. Having him step on the ice was a godsend. I liked it when he said “my contract sucks,” as well.
Uncategorized
Recent articles from Stephan Roget