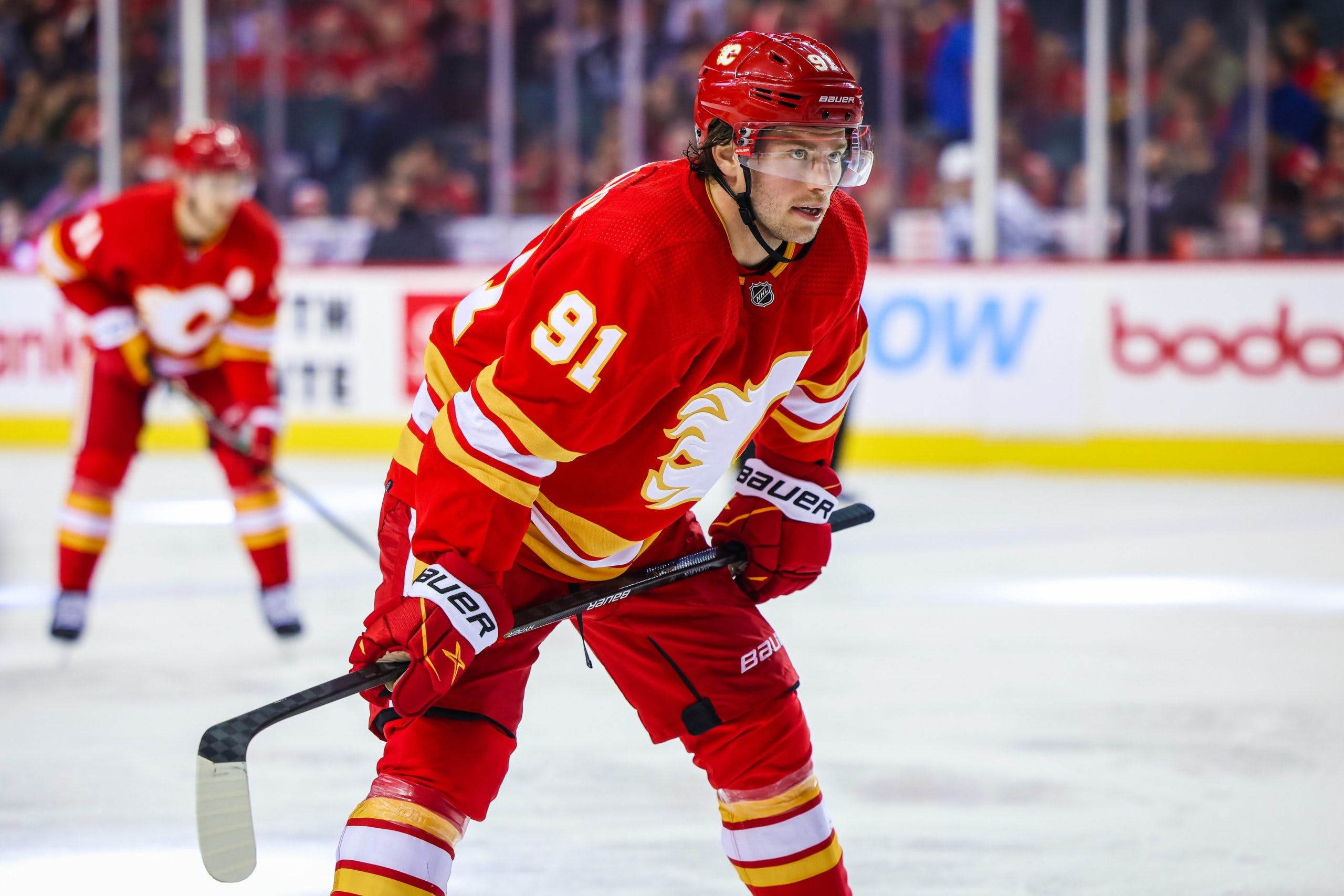 By Stephan Roget
6 months ago
If there’s one singular area the Vancouver Canucks might be looking to address via free agency this summer, it’s their bottom-six forward group.
As it stands, the Canucks look like they could be a forward or two short after making their expected trades this off–season. They’re also particularly low on right-handed options up front.
Of all the Canucks’ potential bottom-six forwards for the 2022–23 season, only Andrey Kuzmenko and Will Lockwood shoot right. Vasily Podkolzin, Nils Höglander, Tanner Pearson, Jason Dickinson, Matthew Highmore, Juho Lammikko, and Justin Dowling are all left-handed.
If the Canucks add anyone in the UFA market, don’t be surprised if it’s someone who shoots right and whose style is suited to a bottom-six role.
And if that right-handed forward can also take faceoffs? That’s a major bonus. Ever higher in the lineup, the Canucks have three lefties taking draws in Bo Horvat, J.T. Miller, and Elias Pettersson.
Throw all that together with a little speed and physicality, and you’ve got the perfect new addition to the Vancouver Canucks’ lineup.
But does such a player exist? Let’s take a look at some options.

C/RW, 30, 5’10”, 203 lbs, Florida Panthers
Expiring $1.67 million AAV
Acciari received some attention after putting up 20 goals in his debut season for the Panthers, but he’s struggled to stay healthy ever since.
While another offensive explosion probably isn’t in the cards, Acciari remains an energetic depth forward who has strong defensive chops and is difficult to play against. He can kill penalties and cover every forward position.

C/RW, 29, 6’6”, 215lb, Minnesota Wild
Expiring $900K AAV
Bjugstad is massive, even if he doesn’t always play like it. Once a borderline top-six talent, Bjugstad has settled into a career as a depth forward, but even there he’s started to slip in recent years.
He can still bring a range of skills to the lineup, and his size does count for something — especially on faceoffs and the penalty kill. Current Canucks president Jim Rutherford has already acquired Bjugstad once in his career (in Pittsburgh), but he’s also gotten rid of him (to Minnesota). If Rutherford and GM Patrik Allvin believe Bjugstad can bounce back a bit, maybe they try him again.

C/RW, 36, 6’1”, 199lb, St. Louis Blues
Expiring $2 million AAV
Bozak is the oldest player on this list, and he’s decidedly past his prime. Up until this season, however, he still played an important depth centre role for the Blues and achieved mostly positive results across the board.
At 36, Bozak is likely near the end of his rope. But if there’s a little gas left in the tank, he wouldn’t the worst option on a one-year deal.

RW/C, 31, 6’0”, 200lb, Calgary Flames
Expiring $1 million AAV
Carpenter is a meat-and-potatoes sort of player, happy to play any forward position but almost exclusively on the fourth line. He’ll hit, he’ll block shots, and he’ll kill penalties.
It’s worth noting that, while Carpenter’s prime years with the Vegas Golden Knights are decidedly in the rearview mirror, he was achieving better results with the Blackhawks in 2021–22 prior to his trade to Calgary.
Carpenter looks like he’s still got a little tread on the tires, at least enough for another year or two.

RW, 27, 6’3”, 215lb, Buffalo Sabres
Expiring $750K AAV
Hayden’s rough analytics can be largely attributed to him being asked to play too big of a role on a bad Buffalo team.
In reality, Hayden is a fourth-line pseudo-enforcer who can provide physicality, fisticuffs, and a reasonable amount of defensive responsibility, so long as his deployment is limited. He’s not the sort of player that anyone should be rushing out to sign, but he does bring some things to the table that the Canucks currently lack.

C/LW, 30, 5’11, 186lb, Calgary Flames
Expiring $2 million AAV
Consider Jarnkrok the “luxury option” for the bottom six. He’s been posting strong middle-six numbers for nearly a decade and is rightly lauded for his versatility.
Jarnkrok can play any forward position on basically any forward line. His lacklustre production with the Flames after a deadline deal might hurt his market value, but expect a number of teams to be after Jarnkrok all the same — which could boost his cost price out of the Canucks’ range.

C/RW, 27, 6’0”, 211lb, Boston Bruins
Expiring $800K AAV
Lazar’s name has already been linked to the Canucks, and there’s definitely a fit to be had here.
The Salmon Arm-born Lazar has built a reputation on his hustle and gutsy play, and he’s just now starting to show a sliver of the offence that saw him drafted No. 17 overall in 2013. He makes plenty of sense as a partner for Juho Lammikko on the Vancouver fourth line, trading faceoffs with the left-handed Finn and helping out plenty on the penalty kill.
Best of all? Lazar should come pretty cheap.

RW, 29, 6’2”, 192lb, Carolina Hurricanes
Expiring $750K AAV
The Canucks have been there and done that with Leivo, whose career has taken a bit of a downward turn in his time away from Vancouver.
After a so-so season in Calgary, Leivo split the 2021–22 season between the Carolina Hurricanes and the AHL. He had no difficulty with the Chicago Wolves, leading them to a Calder Cup and picking up playoff MVP honours.
After 29 points in 18 playoff games, someone is going to give Leivo another shot in the NHL this season. Maybe the Canucks will be the ones to do it.

C/RW, 33, 6’2”, 185lb, Tampa Bay Lightning
Expiring $750K AAV
Nash has been passed around a lot lately, suiting up for six different teams over the past two seasons.
But the last team to pick him up was the Tampa Bay Lightning, who wound up using him far more than expected on their run to the 2022 Stanley Cup Final. He logged eight playoff games for the Bolts this year and was in the lineup when they lost Game 6 to the Colorado Avalanche.
Nash is a no-nonsense defensive forward who suppresses everybody’s scoring chances — including those of his teammates — whenever he’s on the ice. He’ll win faceoffs, he’ll win possession of the puck, and he’ll win himself a spot in the lineup through sheer responsibility.
If the Canucks want some stability in their bottom six, Nash might be the most cost-effective way to get it.

RW/C, 28, 5’11”, 184lb, Pittsburgh Penguins
Expiring $1 million AAV
After a career season, Rodrigues is in line for a big raise — probably one that will take him outside of the Canucks’ reasonable spending limits.
For the most part, Rodrigues is a talented and versatile bottom-six forward. He can also occasionally play higher in the lineup, as he did in 2021–22. Perhaps Rodrigues feels some lingering loyalty to Rutherford for rescuing him from Buffalo and reviving his career. If not, expect Rodrigues to sign with someone who is willing to show him the money.

RW/C, 27, 6’0”, 194lb, Colorado Avalanche
Expiring $750K AAV
Sherwood didn’t manage to crack the lineup of the Colorado Avalanche often this season but, then again, they were the Stanley Cup champions for a reason.
In 57 AHL games with the Colorado Eagles this year, Sherwood 36 goals and 75 points. He’s a relentless hustler who is effective on the forecheck and has proven himself a capable minor-league scorer.
The Canucks can afford to give Sherwood a chance to try and parlay his 2021–22 minor-league success into a regular role in the NHL.
More from CanucksArmy:
Uncategorized
Recent articles from Stephan Roget