Owen Pickering moves like an undersized defenceman but stands tall at 6’5”: Realistic options for the Canucks at 15 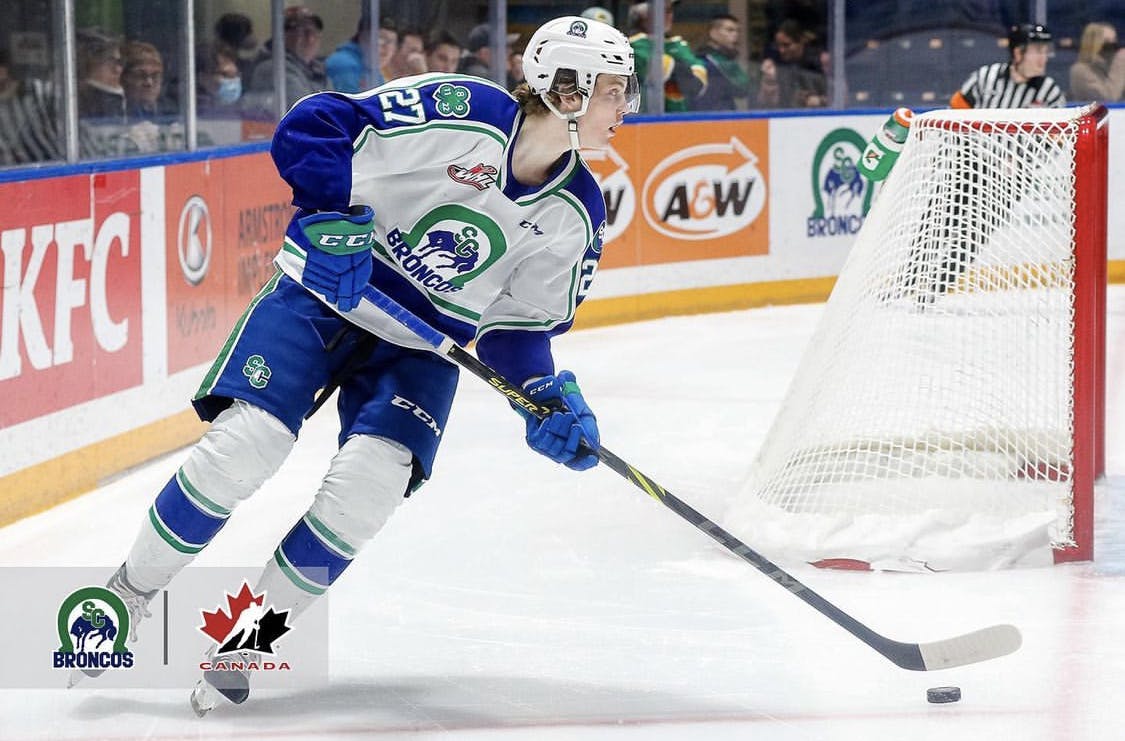 By Faber
4 months ago
Owen Pickering is a big offensive defenceman who is willing to throw the body around and has a bomb of a shot from the point.
He’s another one of those prospects who hit a growth spurt late in his development, causing people to start taking notice of a 6’5” pillar who plays like he’s a small offensive rearguard.
I’ve interviewed a lot of prospects in my time here at CanucksArmy and my conversation with Pickering may have been my all-time favourite. He’s a good Manitoba kid who just loves every second of being mentioned as a potential first-round pick.
Pickering learned to play hockey as an undersized defenceman, so when he filled out, he carried over those traits of being a strong puck-mover. He just happens to now be 6’5” and tower over nearly everyone.

As we’ve already mentioned multiple times, Pickering comes in at 6’5″, weighs somewhere in the vicinity of 180 pounds, and is a left-shot defenceman. He spent last season with the Swift Current Broncos of the WHL. It was Pickering’s second major junior season after his 23-game rookie turn with the Broncos in 2020-21.
This past year, Pickering took a big step in terms of offensive production. He finished the year with nine goals and 24 assists in 67 games and was also given an opportunity to play with Canada’s U18 team, on which he quarterbacked an elite power-play group and was trusted to be the workhorse on Canada’s back-end. 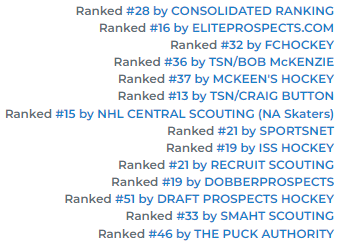 The rankings are all over the map with Pickering, as some of the scouting outlets have him as a second-round pick but trusty sources like Elite Prospects, Dobber Prospects, and Craig Button see him as a top-20 talent in the draft.
There is such raw talent in his game that has us believing there is an incredibly high ceiling for Pickering. We could be looking at a big top-pairing defenceman if Pickering is developed correctly and continues to improve on his game at a similar rate as the jumps he made over the past two seasons.
Pickering is a trustworthy defender whose biggest strength is likely his ability to chase down dump-ins and skate the puck up ice to begin a breakout. He uses his size and wingspan to push off forecheckers, always looking so calm under the pressure of a dump-and-chase forechecker.
We loved Pickering’s play throughout the U18 World Championships. He played upwards of 26 minutes per game while helping on Canada’s power play and penalty kill units. He developed confidence as the tournament went on and was physical when he needed to be.
Seeing Pickering defend without panic is very promising for him as he will be forced to make even quicker decisions once he gets to the next level. Pressure doesn’t seem to get to him and that trait is great to see in someone who already possesses raw talent.
We also thought highly of Pickering’s intelligence when jumping into offensive plays. He consistently recognizes when he can be the third man in on a three-on-two rush. Once established in the offensive zone, Pickering likes to sneak down low and get his hands on a loose puck at the left side of the net at five-on-five and the right side during power plays.

Nobody is really sure where Pickering is going to go in this year’s draft. Some team may love him and take a swing on a big defenceman as Steve Yzerman did with Moritz Seider.
It’s clear that Pickering has tremendous instincts when it comes to the game of hockey. His growth spurt definitely helps but it looks like he needs another couple of years to really figure out his skating stride. He already gets through the neutral zone at a good pace, and if he can develop well with a skating coach, Pickering could end up being a monster in the WHL next season as well as being an impact player on Canada’s World Junior team as an 18-year-old in December.
Pickering will be eligible to play at each of the next two World Junior tournaments. He could very easily be the best Canadian defenceman at the 2024 WJC and might end up showing some of the dominance we saw from Thomas Chabot in his final year with the U-20 Team Canada.
Still, you’re taking a risk with Pickering and that may not be the route that the Canucks want to follow. To go with Pickering at 15, you have to feel extremely passionate about the development that he will have over the next two years. You’d probably also have to see Denton Mateychuk, Simon Nemec, David Jiricek, and Pavel Mintyukov already off the board because they are the four defencemen who seem to be a tier up on Pickering.
We really like Pickering’s upside. He has all the tools to be a top-pairing defenceman, but his game is so raw that you need be confident in your development team to make sure that they can get the best out of him. He can be effective at five-on-five and contributes to both the penalty kill and power play.
There’s so much to like about Pickering’s game but you need to be sure that you can develop him correctly. We learned a lot about him as a person in Episode 263 of the Canucks Conversation podcast and are confident that he is willing to put in the work. The Canucks and their new development team would need to be all over Pickering to be sure that he takes all the right steps.
If you end up getting the absolute best out of Owen Pickering, you might be adding the best all-around defenceman in this entire draft class.
More from CanucksArmy:
Uncategorized
Recent articles from Faber