Why the Vancouver Canucks should absolutely not trade for Seth Jones 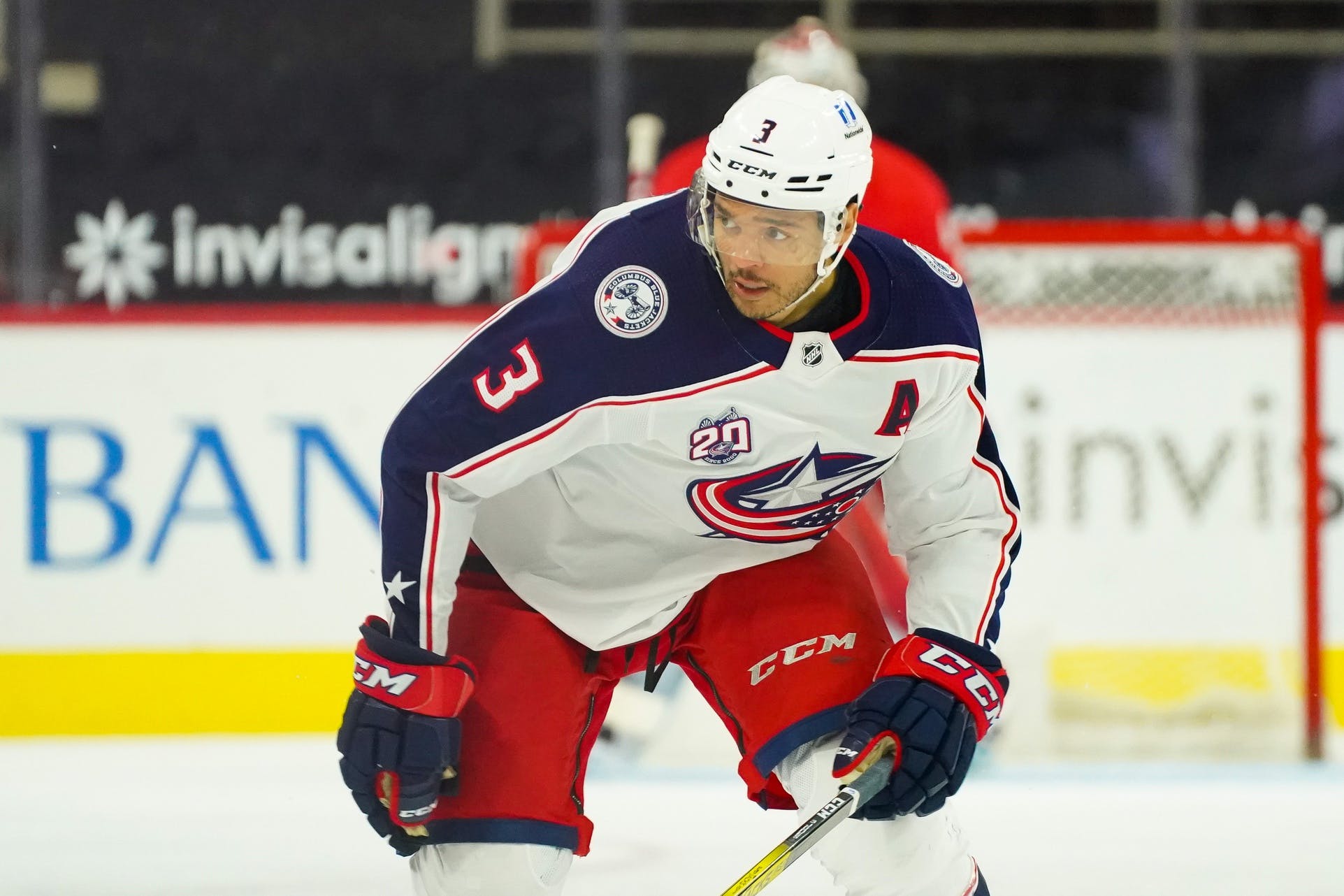 By Stephan Roget
1 year ago
Seth Jones, a pending UFA after the 2021/22 season, recently informed the Columbus Blue Jackets that he would not be extending his contract, and that he’d seek a departure from Ohio via free agency or, ideally, a trade in the interim.
The Vancouver Canucks, meanwhile, are on the lookout for a right-handed defenceman capable of playing on their top pair alongside Quinn Hughes, and that’s exactly the position Jones usually plays.
It’s a match made in roster-tweaking heaven, then, no?
No! Wrong! Stop!
While it’s easy to see from whence the notion has sprung, the idea of the Canucks acquiring the 26-year-old during the 2021 offseason is actually a pretty bad one, and one that seems destined to set the franchise back even farther, rather than pushing it to that next step ahead.
And here’s why.

Obviously, there’s plenty to like about Seth Jones, otherwise, we wouldn’t be having this conversation. He is, indeed, a right-handed top-pairing defender — in Columbus, at least — and a sizeable one at that, weighing in at 6’4” and 210 pounds.
The word elite gets tossed around far too much these days, but it has been correctly applied to Jones in the past. He picked up his first Norris Trophy votes after 2016/17, his first full season with the Blue Jackets and his fourth in the NHL. The following year, Jones just missed out on a Norris nomination, finishing fourth in voting as he led Columbus to what would be the second of four playoff appearances.
But right around that same time, something seemed to change in Jones. In 2018/19, he received fewer than half as many Norris votes as the year before, and in 2019/20 he received none — a feat he seems likely to replicate in 2021.
There appears to be clear signs of decline in Jones’ game and a definitive downward trend. And, no, in case you were wondering, our entire argument is not based solely on award voting.
From NHL.com
It doesn’t take a mathematician to see the overall pattern in Jones’ production year-by-year. In that near-Norris 2017/18 campaign, Jones ranked ninth overall in league-wide defence scoring. Since then, his goal, assist, and point rates have declined on a yearly basis, with his goal-scoring rate in particular having been halved.
A decline over one or two years could be considered an anomaly capable of being bounced back from. A three-year slide? That seems more permanent.
But so what? So, Jones’ offence peaked at about age 24, like it does for most NHL players. The Canucks already have plenty of offence to offer from the blueline in Hughes, Jack Rathbone, and even Tyler Myers. What they really need is a two-way stud, someone capable of putting up some points, sure, but also of holding things down in their own end, eating minutes, and taking on all the tough matchups.
Well, about that.
As we head over to Jones’ advanced stats page on NaturalStatTrick, we see evidence of the same overall downward trend. Pick a stat, any stat: possession metrics, shot-control, chance-control, whatever.
Each one tells the same story of a Jones who was at his best in 2017/18 and has since gotten a little bit worse every year, to the point that his analytics are well below average as of 2021.

From NaturalStatTrick.com
But, wait!, you’re surely shouting at your screen of choice right about now. Shouldn’t Jones’ defensive metrics be considered within the context of his role and deployment?
You’re absolutely right, loyal reader. Unfortunately, that doesn’t really help matters much.
Jones spent more than half of his time on the ice alongside Zach Werenski on the Blue Jackets’ top pairing, and together the duo faced matchups slightly tougher than the league average.

Dobber’s Frozen Tools
But Jones and Werenski weren’t thrown out there exclusively against opposing top lines — David Savard and Vladislav Gavrikov also took their fair share of tough matchups, and did so with less favourable zone-starts.
That Werenski’s deployment reads as a little more difficult than Jones’ shouldn’t come as too much of a surprise. Whenever they were split up, Werenski would partner with Savard and continue to face the best the opposition had to offer. Jones, on the other hand, paired up with our old friend Michael Del Zotto for some pudding-soft minutes. 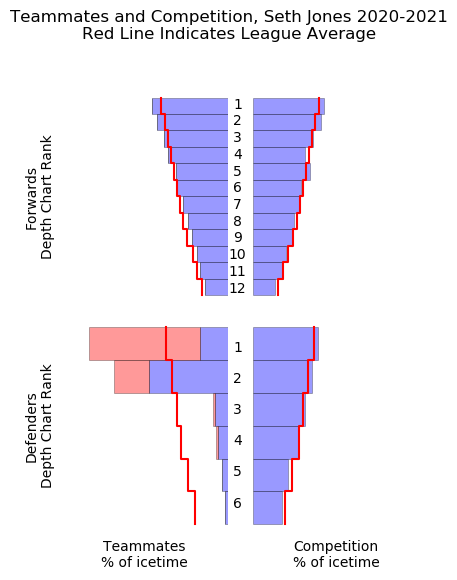 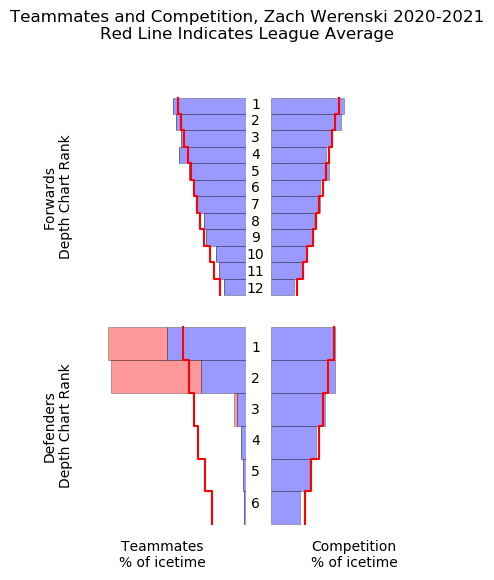 From HockeyViz.com
Given that context, one would think that Werenski might perform a little worse whilst away from Jones, but the opposite is true. Together, Jones and Werenski’s possession metrics and chance-control are passable. Apart, Werenski’s get a touch better, and Jones’ plummet.

From NaturalStatTrick.com
Now, does that have something to do with some of those non-Werenski minutes occurring next to the disastrous Del Zotto? Of course. But it’s also evidence that Savard was probably the superior partner when it came to shutting down the opposition. It could even be considered evidence that, of the two, Werenski is the superior defensive defender to Jones – despite the gulf in their general reputation.
Even more advanced analytics – the sort this author can only ever pretend to understand — have been sounding the whistle on Jones for a minute now. Twitter WAR legend JFresh predicted in the offseason that Jones would be a below-average player in terms of wins-above-replacement and goals-above-replacement in 2021, and it turns out they were being generous. 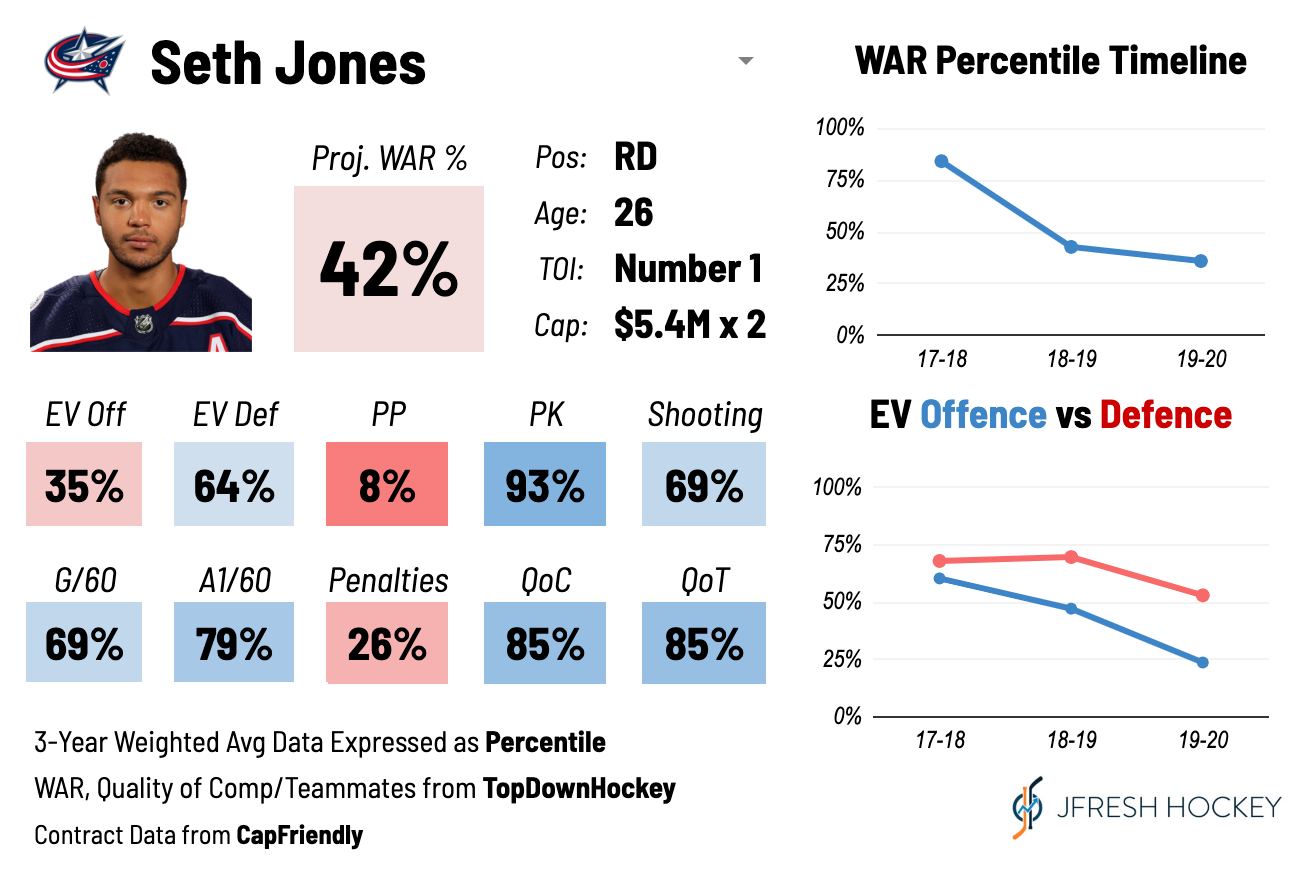 From @JFreshHockey
Jones’ 2021 replacement-based statline of -5.8 GAR, -1 WAR, and -1.9 SPAR (Standing Points Above Replacement) ranked him sixth-worst in the entire league among regular-skating defenders. His overall WAR measure had him in the third-bottom-percentile of all skaters. That’s with his role, ice-time, deployment, and teammates all factored in. 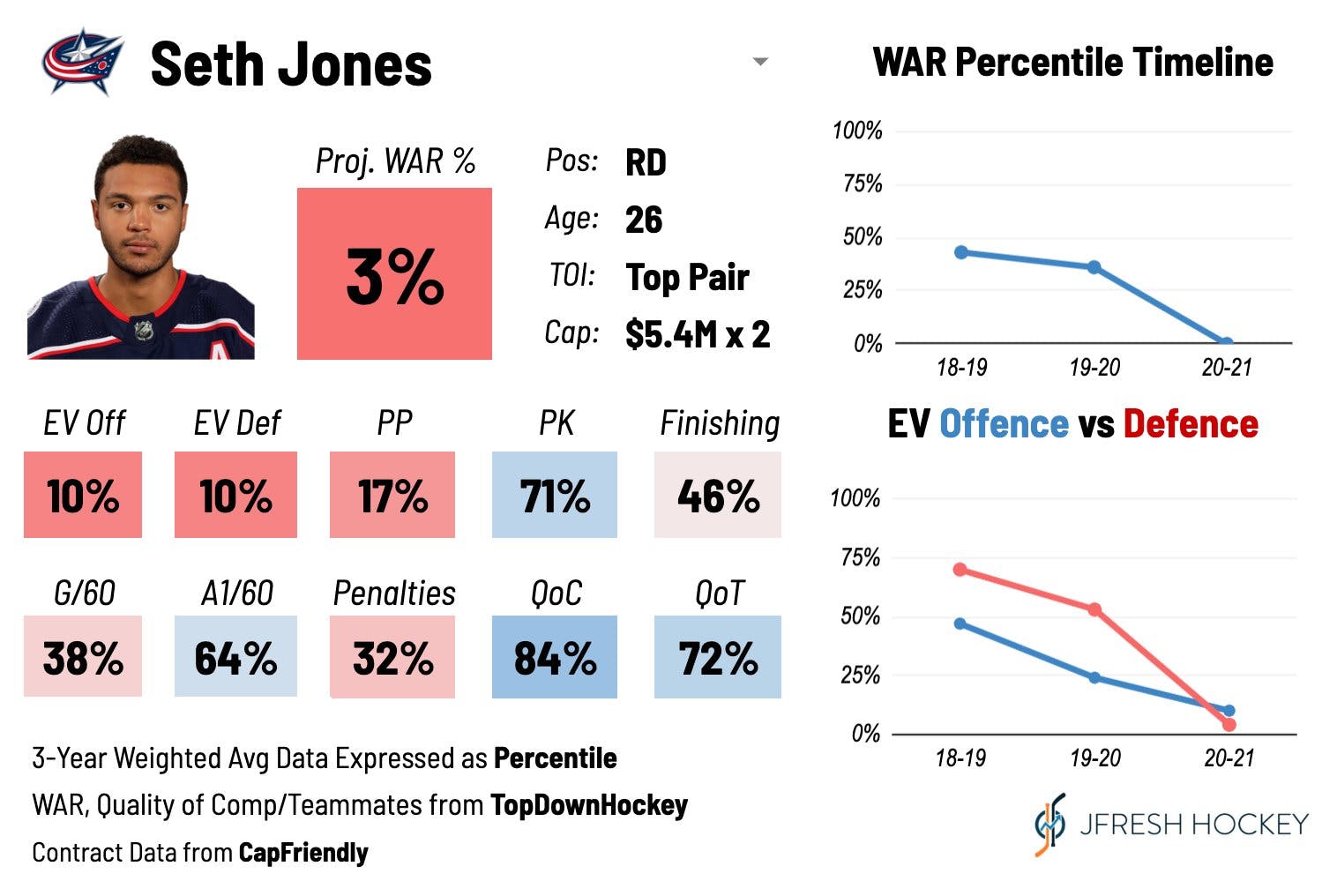 From @JFreshHockey
Corey Sznajder, another Twitter phenom with a familiar name, tracked Jones’ zone-entry numbers in 2021, and they were equally disheartening. Jones allowed opponents to carry the puck into his zone on 67.1% of attempts, and allowed them to pass it into his zone a further 19.6% of the time.
The question really seems to have shifted from “Is Seth Jones a good enough defender for the Canucks’ top pairing?” to “Is Seth Jones a good defender?”
And the answer might be no.
We hate to be entirely negative, so we’ll pause here to examine the arena in which Jones seems to particularly excel: the playoffs.
From NHL.com
Multiple near-point-per-game postseason outings is nothing to sneeze at, and we’ll give Jones full credit for it. Unfortunately, his 2019/20 playoff showing was his worst yet, and that could be even further evidence of that downward trend we won’t stop mentioning.
All in all, we like to think we’ve made a fairly convincing case that Jones is not the droid (D-RHD) the Canucks are looking for when it comes to firming up the right side of their blueline.
And here’s the wild thing: we haven’t even mentioned his salary demands or what it would cost to acquire him.

We can probably all agree that trading for Jones now and letting him walk via free agency next summer would be an unwise move at best. The Canucks are simply not in rental mode quite yet, and they’ve hopefully learned a lesson from the Tyler Toffoli debacle.
Any trade for Jones, then, would have to be predicated on him signing an extension in Vancouver shortly after arriving.
And that’s even worse news than all the bad news we just gave you.
Unrestricted free agency in the NHL is still heavily based on reputation. Every year, players get paid outrageous amounts for their past level of performance, only to start underperforming their new contracts almost the second the ink is dry.
Jones has a lot going for him on this front. A history of Norris consideration, mind-boggling time-on-ice totals, respectable production, and a draft pedigree that still follows him around. That’s more than enough to get him paid, and paid big, in the summer of 2022.
Don’t believe a right-hander capable of eating big minutes, but not necessarily thriving during said minutes, can cash in as a UFA? Just ask Tyler Myers.
In a market where Myers made $6 million, Torey Krug made $6.5 million, Jared Spurgeon made $7.5 million, and Jacob Trouba made $8 million, there’s just no way that Jones accepts anything less.
Thus, the bidding on a new contract starts at $8 million and only goes up from there, and it comes with a minimum term of six years, carrying Jones from age 28 to 33 or higher.
Based on everything we’ve put in front of you thus far, Jones is not worth that contract. And even if you think he secretly might be, we’ll hand things over to Twitter pal Sean Butler, who recently put it better than we ever could.
Signing Jones to the contract he’ll be asking for wouldn’t just harm the Canucks, it could destroy their hopes of turning this core into a contender for good. Imagine, if you will, a top-four right side of Jones and Myers, pulling down a combined cap hit of $14+ million and each drastically underperforming expectations.
Or don’t, if you’d prefer to save yourself the nightmares.

So, we’ve covered why the Canucks shouldn’t really want Jones all that badly, and certainly not enough to pay him what he wants.
But some in this fanbase and mediasphere want to do all that AND give up major assets for the privilege.
If rumours are to be believed, the bidding for Jones starts at a high first round draft pick — like the Canucks’ current 9th overall selection — and a top prospect, something Vancouver is awfully thin on already. Chances are good that negotiations will only push that asking price even higher as a bidding war for the top defender on the trade market erupts.
Think the 9th overall and Vasily Podkolzin for Jones. Or an unprotected first in 2022 and Jack Rathbone. And then stop thinking about those possibilities, because they’re awful.
This is a team brimming with holes all over the roster, both short-term and long-term. Giving up long-term assets to fill a hole in the short-term is a questionable decision at best, and destroying your team’s cap flexibility for the next decade to do so is just plain heinous.
So, we’ll close by repeating ourselves.
Seth Jones?
No. Stop. Don’t.
Uncategorized
Recent articles from Stephan Roget