The Vancouver Canucks could definitely use Sam Reinhart, but they can’t afford to bring him home 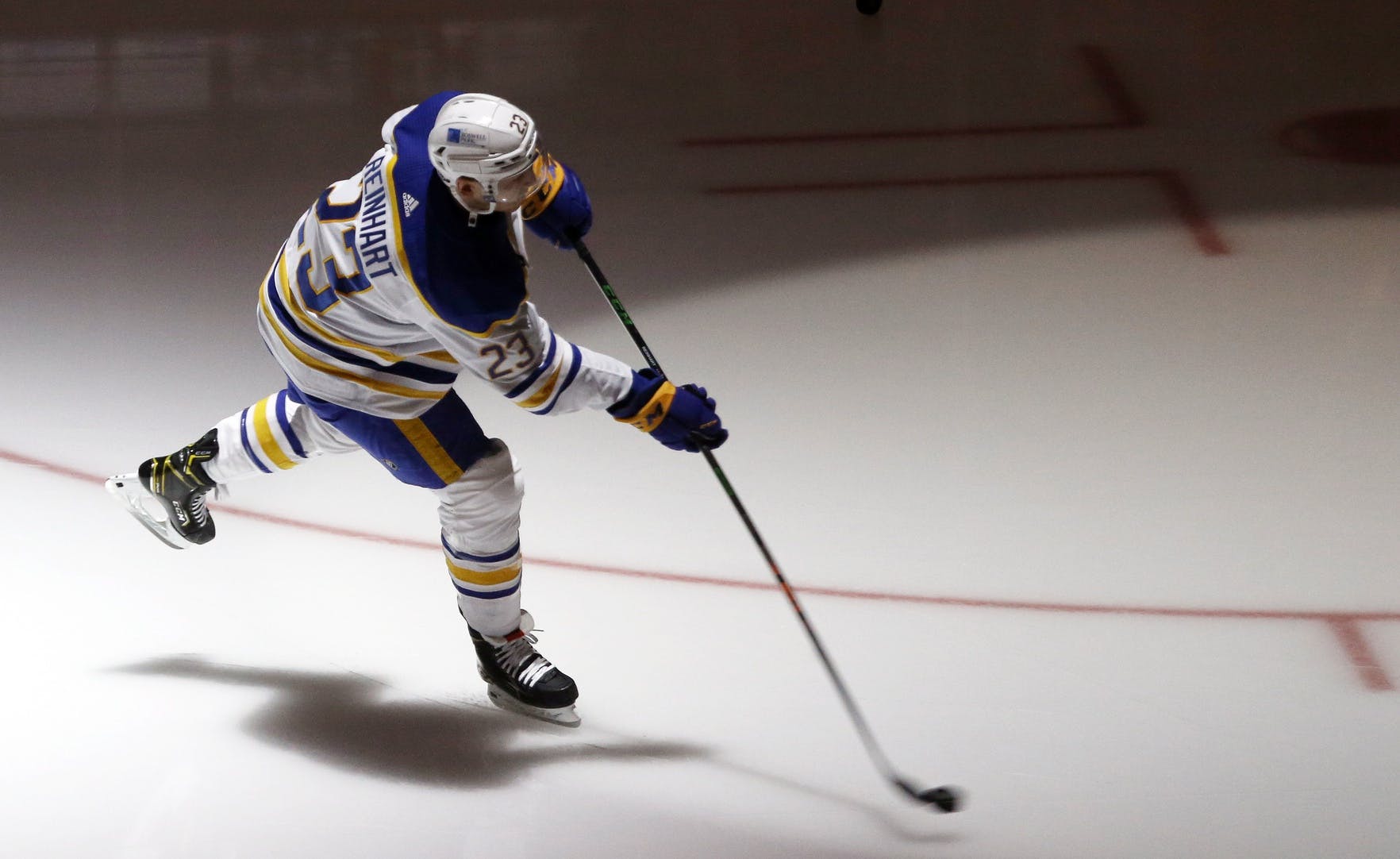 By Stephan Roget
1 year ago
Every offseason, it happens. Like clockwork.
The Vancouver fanbase zeroes in on some player on the market with some local tie or another and decides that said player must be acquired by the Canucks.
In 2019, it was Tyler Myers, who spends his summers in the Okanagan.
In 2020, both Tyson Barrie and Travis Hamonic drew plenty of attention, but only Hamonic ended up signing.
And in 2021, the honour of “NHL Player Most Likely to Make a BC Homecoming” undoubtedly goes to North Vancouver’s Samson Reinhart, who is currently employed by the Buffalo Sabres.
The 25-year-old Reinhart is the latest Sabre to make strong insinuations that he would like to play elsewhere without coming right out and asking for a trade. That, combined with his stellar play this last season and his BC origin point, has some fans on the edge of their seat for a potential summer blockbuster.
But they might want to scooch it back just a little.
While the Canucks could indeed benefit from the addition of Reinhart, and while he may seem like an ideal acquisition in a vacuum, the National Hockey League does not exist within a vacuum (despite how much the refs suck).
Factors such as roster composition, the flat salary cap, and the asking price each serve to greatly complicate any theoretical Reinhart trade.
Below, we’ll go over Jim Benning and Co.’s entire decision-making process as it should pertain to Reinhart, all with the aim of answering two burning questions:
Do the Canucks need Sam Reinhart?
and
Can the Canucks afford Sam Reinhart?

There’s little doubt that Reinhart is a top-line-quality NHL forward. His career took a little while to get going, and it may never reach the heights predicted when he was drafted second overall in 2014, but the numbers cannot be ignored.
Reinhart earned 42 points in 79 games as a rookie in 2015/16 and has never dipped below that point-per-game average. In fact, he’s steadily increased it over the years. His last three seasons — all played the lowliest of lowly Buffalo Sabres — have seen PPGs of .79, .72, and .74, which makes him about a 55-to-60 point player in a full regular season.
Across those three seasons, Reinhart’s PPG ranks 65th amongst regular-skating NHL forwards, and that’s clear-cut first line production any way you slice it.
With a little context, Reinhart looks even better.
Through those same three seasons, the Sabres were the sixth-lowest scoring team in the league, and all it takes is one look at their depth charts to know that Reinhart wasn’t exactly surrounded by complementary talent.
Strangely enough, then, it was with Reinhart’s most talented teammate, Jack Eichel, on the sideline that Reinhart started playing the best hockey of his career.
Prior to the 2021 season, Reinhart had primarily been employed as a winger despite being drafted as a pivot. But when Eichel went out with a season-ending injury, Reinhart became the Sabres’ top center and responded in kind. Through April and May of 2021, Reinhart notched 12 goals and 18 points in 20 games, a statline that would have looked even more impressive had he not gone pointless in the final three games of the season.
His most frequent linemates during this period?
Jeff Skinner, Victor Olofsson, Kyle Okposo, and Anders Bjork, who finished 2021 with a grand combined total of 70 points.
So, yeah, in other words, Reinhart is more than a good enough player to make any team he joins better, at least on paper, and especially the bottom-of-the-North-Division Vancouver Canucks.
But being good and being a good fit are two different things.

Right now, it’s hard to say whether Reinhart’s future will be on the wing or at center.
Obviously, he’s got a longer track record as a winger, and a fine one at that, but his best play of all came in his natural position as a center – but then again, that was a fairly small sample size.
Fortunately, he might be a roster fit for the Canucks either way.
This past season, Vancouver experimented with JT Miller at center out of necessity, and the results were encouraging. Placing Miller at the 2C or 3C position to start 2021/22 has been suggested by many as a means to plug up an obvious hole in the lineup, but doing so removes one of the few potent scoring threats from the top-six.
Enter Reinhart.
As a winger, Reinhart could cover Miller in the top-six as Miller moved into a semi-permanent center assignment. But as a shoot-first right winger, he’s perhaps not the best person for the job. Both he and Brock Boeser prefer the same side, so one of them would have to move over if Reinhart joined the Lotto Line. He could swap places with Nils Höglander on the second line fairly easily, but then there are questions to be raised about how two goal-scorers in Reinhart and Bo Horvat might mesh.
With Reinhart on the wing, we’re probably looking at a top-nine of:
Höglander-Pettersson-Boeser
Pearson-Horvat-Reinhart
Motte/Lind/Whoever-Miller-Podkolzin
A better use of Reinhart’s talents, however, might be to keep both he and Miller at the positions where they’ve performed best. Make Reinhart the 2C, bump Horvat and Tanner Pearson down to a more dedicated defensive role, and start rolling three strong lines that look like:
Miller-Pettersson-Boeser
Höglander-Reinhart-Podkolzin
Pearson-Horvat-Whoever
There’s some moving around to be done in there — maybe Podkolzin starts on the third line to learn shutdown duties while someone cheap fills into the top-six — but the bare bones are there for a dynamite top-nine, so long as Horvat and Pearson’s defensive game can rebound.
Reinhart fits, and he fits in a few different ways. The Canucks’ forward corps are undoubtedly stronger with Reinhart than without him.
Unfortunately, nothing in this world is free.

Right now, Vancouver can add Reinhart to their roster without adding a dime of salary, because he’s a pending RFA. But if they actually intend to get him onto the ice in 2021/22, they’re going to run into trouble.
The cap woes of the Canucks have been bandied around ad nauseum already this offseason, and so we’re spare you the boring details. Suffice it to say that the Canucks will have less than $20 million in space to re-sign or add about eight players, two of whom will take up almost all of it in Elias Pettersson and Quinn Hughes.
Assuming you can get those two in at under a combined $14 million and go super cheap on everyone else, you’re still not left with nearly enough for Reinhart. His latest deal was a one-year extension worth $5.2 million, and it’s safe to say that he won’t be taking a pay-cut, even if he chooses another bridge deal.
Any long-term commitment from Reinhart is going to cost somewhere between $6 and 7 million as a base salary, even with a presumed hometown discount for the Canucks. That’s money that the Canucks simply do not have available to spend.
There are, of course, methods through which Benning and Co. could clear some room. Buyouts for Jake Virtanen, Loui Eriksson, and Braden Holtby are possibilities. A surprise retirement could do them even better. Cap dump trades are onerously expensive under the flat cap, but also something that could happen.
So, if a lot goes right and the Canucks have a few things break their way this offseason, they might — might — be able to squeeze together enough cap space to acquire and then extend Reinhart. That, however, would mean zero improvements elsewhere on the roster, most notably on a blueline that badly needs it. It would, in fact, mean letting both Alex Edler and Travis Hamonic walk and replacing them with players earning close to the league minimum.
The Canucks could easily add Reinhart and still come out the other side as a worse overall team.
There are also considerations beyond 2021/22. At the end of that campaign, several bad deals come off the books, but both Boeser and Jack Rathbone will be in line for raises. A year later, Horvat, Miller, and Höglander’s contracts will each expire, and then there’s the end of Pettersson and Hughes’ bridges to worry about.
If the salary cap stays around $81.5 million for the foreseeable future, which sounds likely at this juncture, then space will be hard to come by in Vancouver until well past 2023, and that’s without Reinhart in the picture.
With him, it’s hard not to see the Canucks as hamstrung. A fifth high-priced forward on the roster on top of Pettersson, Boeser, Horvat, and Miller is a luxury the Canucks really cannot afford.
It’s also a luxury for which they’d have to pay heavily even before they inked Reinhart to a new contract.

No matter how badly he wants to play somewhere else, the Buffalo Sabres still hold Reinhart’s rights, and they’re thus welcome to auction him off to the highest bidder.
And even under the flat cap, there will be suitors.
Currently, bidding is reported to start with a top-ten draft pick — something that the Canucks have on hand, conveniently enough. But these sorts of things tend to spiral out of control, and so Vancouverites can safely expect their team to add at least a little on top of that if they really want to close a deal for Reinhart.
Is that really worth it for them?
Nope.
As we already stated above, the acquisition of Reinhart just doesn’t work for the team’s current financial situation. Destroying your cap structure, and paying for the privilege of doing so, usually isn’t a winning strategy.
That ninth overall pick, on the other hand, should turn into a useful player on an ELC for three years, something that the Canucks will desperately need to get through the salary quagmire we just described.
In other words, they’d be trading for someone who would only further complicate their cap issues and trading away one of their most valuable potential fixes. It’s a lose-lose.
This is a trade that the Canucks cannot make, plain and simple.
Fear not, however, those of you still hung up on a Reinhart-to-Vancouver move. There’s still a way in which he might end up back in BC, free of charge no less, if only he’s got the will to do it.
Reinhart is eligible for arbitration this offseason. If he chooses to file, an arbitrator will hand him a one-year contract that walks him right to unrestricted free agency – and forces the Sabres to either sign it or let him walk right now.
So, if the Canucks really want Reinhart, their best bet is to wait a season, let him become a UFA, and then sign him for “free.”
Again, nothing is ever truly free, and signing Reinhart in 2022 would still tax the Canucks’ cap to its very limits, and perhaps beyond.
But at least they’d still have their ninth overall pick.
Uncategorized
Recent articles from Stephan Roget