Under the toughest minutes of his career, Alex Edler is quietly having his best defensive season yet 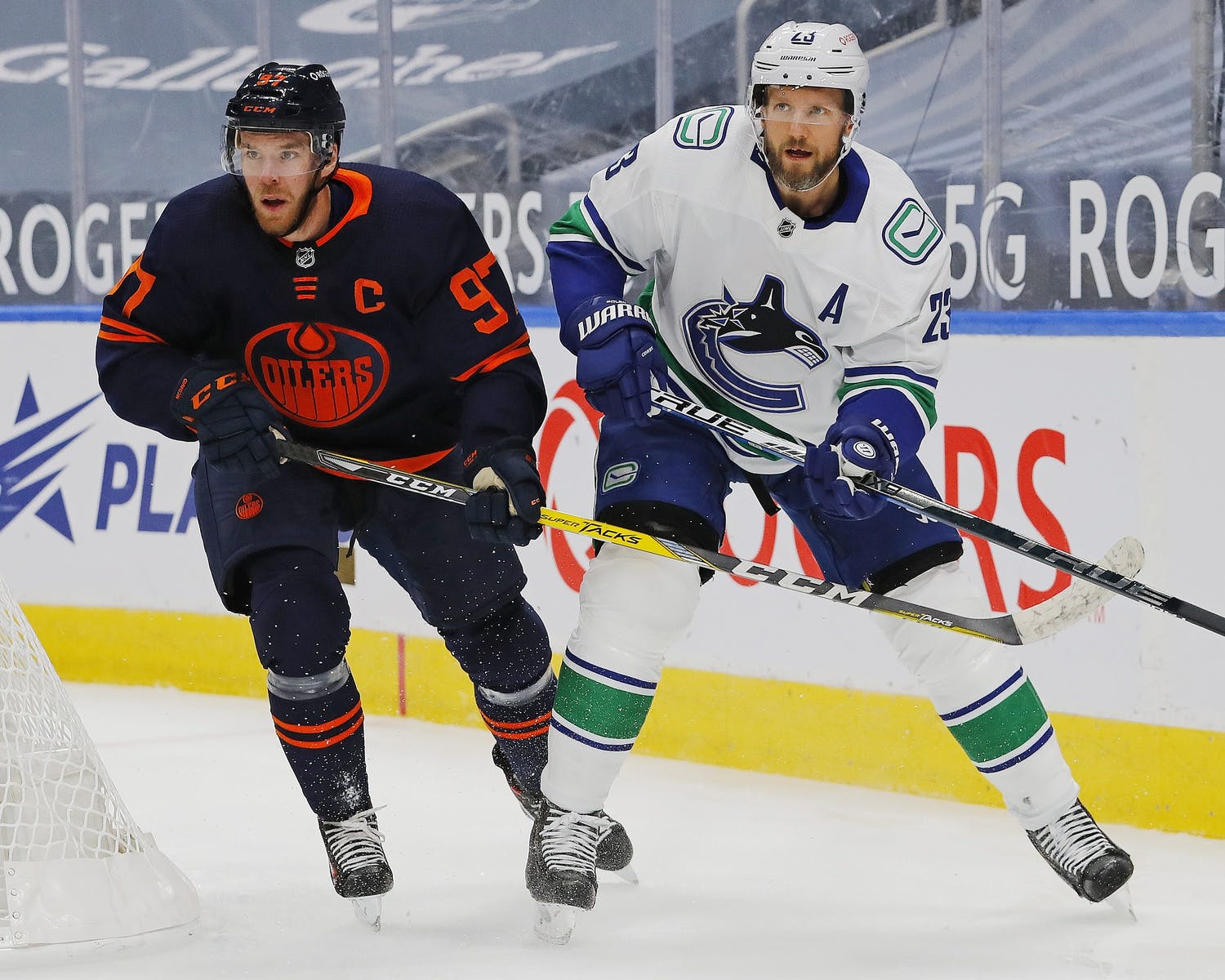 By Stephan Roget
1 year ago
Wine, allergies, blue jeans, and Alexander Edler.
As cliché as it sounds, some things really do get better with age.
These past two seasons, at ages 32 and 33, Edler posted 34 and 33 points in 56 and 59 games, respectively. Extrapolate those totals over a full 82-game schedule, and they’re Edler’s second and third-best offensive seasons ever, and his best since 2008/09.
All the while, however, Edler’s defensive numbers took a nosedive under the strain of shouldering more responsibility on a blueline in flux.
Now in 2021, Edler has posted a scant four points in 19 games, but no one is complaining. That’s because he’s also facing the toughest minutes of his career, and yet somehow responding with defensive metrics that blow his last couple of seasons out of the cellar — and might just constitute his best overall performance as a Canuck thus far.
And all at the age of 34.
Where other defenders might be winding down toward retirement, Edler finds himself on the upswing.

Though the Canucks’ blueline arguably improved in the 2020 offseason via the addition of Nate Schmidt, Edler’s job hasn’t gotten any easier, mostly because he’s been stapled to Schmidt for the bulk of the season, eating up the team’s toughest minutes.
It’s true that Edler’s current TOI average of 20:19 per game is the lowest since his rookie campaign; but when it comes to deployment, Edler’s 2021 has been all about quality over quantity — as in top-quality opponents in low-quality situations, and all with high-quality results.
No regular Vancouver defender has started more of their shifts in their own end than Edler, who sports a not-so-nice 69% defensive zone-start rate, significantly higher than his 49.9% career average.
As per Micah Blake McCurdy of HockeyViz, Edler has also faced the toughest competition of any Vancouver defender, consistently being thrown out against top lines and whatever elite talent the opposition can muster up. 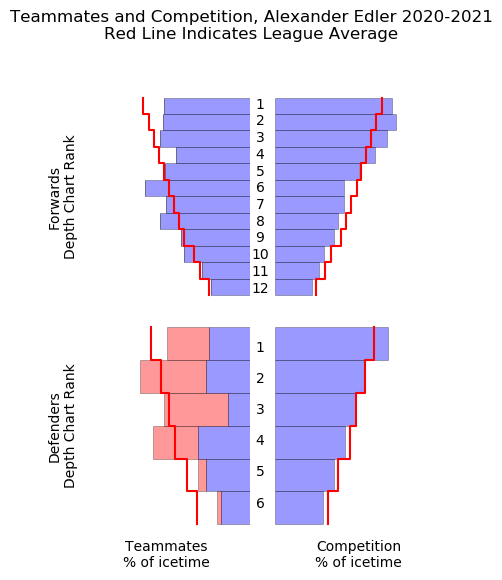 From HockeyViz.com
Both his quality of linemates and PDO of 95.9 — lowest among regular defenders — suggest that Edler isn’t getting quite as much support as he could from other skaters and his goalies when he’s on the ice.
Brutal zone-starts, the strongest competition, and a lack of support from linemates. Sounds like a recipe for defensive disaster, right?
And, yet…

Edler by the numbers

All stats courtesy of NaturalStatTrick.com
Pick a fancy stat, any fancy stat, and you’ll probably find that Edler leads the 2021 Vancouver blueline in it.
Corsi? Check. Control of scoring chances, and specifically high-danger scoring chances? Oh yeah. Fenwick and Expected Goals? Edler doesn’t just lead the D-corps in those categories, he’s ahead of anyone not named Justin Bailey.
Again, it bears serious mentioning that Edler is accomplishing all this despite the toughest deployment of his career, because these numbers also rank quite well when it comes to comparing them to the Edlers of years past.
In every major defensive metric, Edler is either beating or right in line with his career bests, most of which were recorded during the heyday of the 2011 Stanley Cup Finals run. Obviously, Edler is surrounded by a significantly worse Canucks roster today than he was back then, and yet somehow, he’s still finding the same success.
Let’s not mince words here. Edler isn’t just past his physical prime, he’s probably close to a decade past his physical prime. But here he is being asked to do a much more difficult job than he did in those prime years, and he’s performing just as well, if not better.
Truly, it defies all sense and reasonable explanation. Edler, as it turns out, is equally adept at defending against age-related hockey conventions as he is top-flight on-ice competition.
As far as coach Travis Green, who spoke to our own David Quadrelli on Friday, is concerned, there’s no real secret to Edler’s renewed success, aside from the reduced ice-time. To Green, Edler is the same ol’ Steady Eddie he’s been for the majority of his career in Vancouver.
“I think he’s just playing well,” said Green. “Eddie, he’s been a great defenceman for us for a long time. You know, I think he’s used to getting those tough assignments. We’ve tried to keep his minutes a little bit down by not putting him on the power play. And he looks fresh, he’s smart, he’s been physical. He’s having a good year.”
And lower minutes may go a long way toward explaining Edler’s personal renaissance, but he’s also performing better than before in those areas in which his duties haven’t been reduced, namely, the penalty kill.

As of this writing, the Vancouver Canucks have the tenth-ranked penalty kill in the league at 82.3%, a sizeable jump on their 16th-ranked 80.5% of last year.
As was the case in 2019/20, Edler ranks second on the team in shorthanded minutes per game. He trailed just Chris Tanev last season, and just Travis Hamonic this year — the same Hamonic who has only played five games thus far.
In other words, if you’re going to give a single player credit for the Canucks’ improvement on the PK, you’re going to have to give it to Edler. That’s backed up by the fact that Edler has allowed just 0.32 high-danger chances per shorthanded minute, one of the best rates among regular penalty killers and way, way better than he put up in 2019/20. This is, again, despite being put out there against the other team’s top unit on most occasions.

By this point, we know what you’re all thinking, and it’s almost impressive that we’ve made it this far with only one mention of Nate Schmidt.
Yes, in terms of defensive partners, Edler has a big upgrade in Schmidt — with whom he’s shared the ice approximately 44.5% of the time in 2021 — over Chris Tanev and Troy Stecher, with whom he split the 2019/20 season.
Obviously, Schmidt’s presence alone goes a long way toward explaining Edler’s sudden defensive resurgence. But to suggest that Schmidt is the sole reason for Edler’s stellar performance is to not give the veteran defender his full due.

From NaturalStatTrick.com
Both Edler and Schmidt have been significantly better together than they have been apart, and both see their metrics drop drastically with other partners — but more so for Schmidt than Edler.
When he’s not partnered with Schmidt, Edler has spent most of his time alongside rookie Jalen Chatfield. When not with Edler, Schmidt has spent most of his time alongside Tyler Myers.
Despite that time apart, their chemistry has been apparent from the get-go.
“We tried [the Edler/Schmidt pairing] originally at the beginning of the year,” said coach Green. “It wasn’t that we didn’t like it, we just wanted to get Chatfield into some games, and with the hand combos, we had to change the pairings. But that pairing’s been good for us.”

From Dobber’s Frozen Tools
It appears then, that the benefits Schmidt has brought to Edler’s game are, at the very least, somewhat mutual, and that’s something that coach Green certainly agrees with.
“I think it goes hand-in-hand, whenever you have a partnership that you like and that is playing well together,” said Green, “It’s usually because both partners are bringing something to the table. I think they’ve had real good communication, they like playing with each other…they like the assignments they’ve had.”

The eye-test, intangibles, and head coach all agree

Though the numbers definitely look good, they’re perhaps not even the best indicator of Edler’s true excellence. In past seasons, most Vancouver fans would agree that the “eye-test” served Edler better than the fancy statline, and that he’s generally seemed to overperform the expectations of the analytics crowd.
And such is the case in 2021, too, even with a boffo set of stats.
Edler has been noticeably more mobile this year, roving up into the play in a way he hasn’t done since his earliest days in the league. He’s yet to score, but he’s come close on a couple of net-front chances, which says a lot about how active his offence has been.
He’s also hitting — if not exactly as zealously as he used to — with the sort of ferocity Vancouverites haven’t seen in years. His hits-per-60 might be down slightly, but the quality of those hits has increased by board-rattling magnitudes. Edler has made a real habit out of obliterating Calgary Flames this season, and he was one of the few players to stay consistently ornery during that dreadful six-game losing streak — one of the few who seemed genuinely angry to be losing so much. He elbowed Elias Lindholm, decked Rasmus Andersson, and even managed to turn Matthew Tkachuk into an agitatee, rather than an agitator, for once.
If Edler’s stern and silent brand of leadership wasn’t apparent enough during that losing streak, it was key in helping the team get out of it and over it. In fact, Edler’s quiet, steady alternate captaincy has been arguably more important in 2021, with the offseason departures of key leaders Tanev and Jacob Markstrom, than it ever has been before.
So, to summarize, Edler’s ice-time and offensive production may be down, but everything else is up, up, and away. The Canucks’ own man of steely glares has faced the toughest zone-starts and competition of his career and responded with the best defensive statline he’s ever put together, all the while increasing his physicality and playing a vital role in maintaining team culture as the last holdout of the Sedin era.
All of which goes to show, one should always respect their elders — and their Edlers, too.
And one should never count them out.
Uncategorized
Recent articles from Stephan Roget