With trade rumours swirling, now is the time for the Canucks to trade Brock Boeser 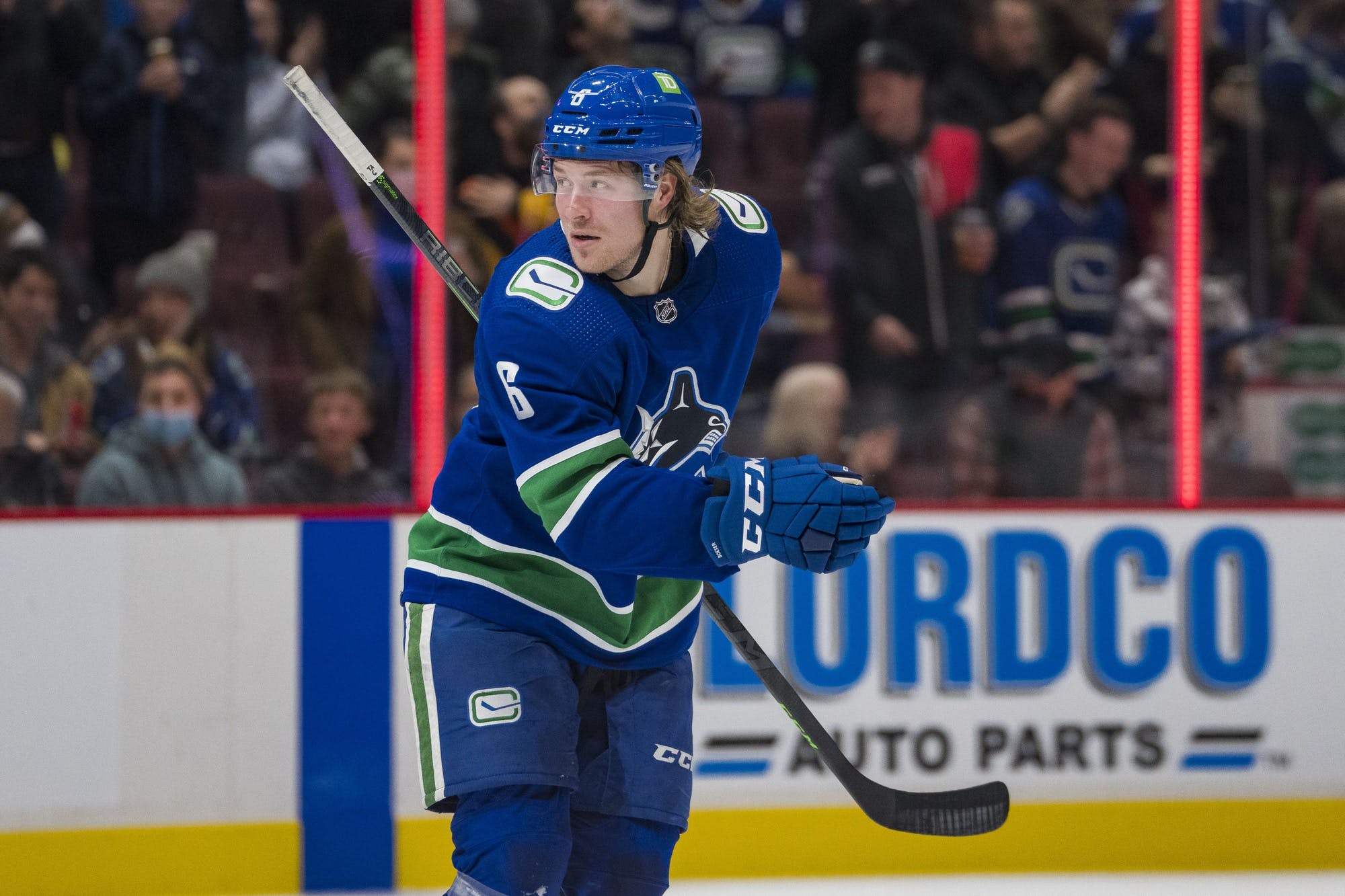 By Noah Strang
22 days ago
With the Vancouver Canucks blowing another multi-goal lead on Tuesday evening against the Pittsburgh Penguins, this season continues to look like a write-off. The Canucks have mustered a measly 37 points in 40 games, good for sixth in the Pacific Divison and eight points out of the last wild card spot.
They’ve managed to win just one of their last six games and face a gruelling schedule with games on the road against the Tampa Bay Lightning, Florida Panthers, and Carolina Hurricanes on the horizon. If they hadn’t already, it’s now time for the Canucks to accept their fate and start selling some assets before the trade deadline.
This push into “sellers” territory has made the Canucks a popular name in the rumour mill. There are plenty of reports about teams checking in on various roster players. One of the most popular targets out there right now seems to be Brock Boeser, the 25 year old goal-scoring winger.
“Word is that teams keep poking around on Brock Boeser and are exploring it in a more realistic manner. I don’t think anything is imminent, but teams are giving it more thought and trying to see how they could make it work,” Pierre LeBrun wrote in a recent article for The Athletic. “The Wild have talked to Vancouver about it, and Boeser returning to his home state would be a good story, but it doesn’t sound like Minnesota feels it can make it work cap-wise.”
While at one point Boeser was considered a cornerstone piece of this franchise’s revival, those days are long gone. While his high salary may damper the return slightly, the Canucks need to be talking to interested teams and progressing those conversations. It may hurt the fanbase, but the time to sell Boeser is now and if they miss this window, the Canucks will regret it over the next few years.

Boeser immediately dazzled Canucks fans upon entering the NHL. He brought energy and life to a franchise that had been looking for someone to cheer for. He finished the season with 29 goals and 55 points in 64 games, impressive numbers for a freshman. He also managed to bring home the All-Star MVP Award, a fun cherry on top of a great year.
Since then, Boeser has experienced a slow decline in effectiveness. His progression has not followed a regular path and he now finds himself in the midst of the worst season of his career. He has yet to match the 29-goal mark he recorded during his rookie season, and he doesn’t look posed to do it this season.
These past two seasons have been the most difficult for Boeser. Over 103 games during the 2021/22 and 2022/23 seasons, he has 31 goals and 70 points. That’s a 24-goal and 55-point pace. While those numbers don’t seem terrible in a vacuum, the fact that he doesn’t contribute much in other areas means that he needs to be scoring while on the ice.
This season, the Canucks are allowing 4.94 goals per sixty 5-on-5 minutes with Boeser on the ice, the worst mark of any player with at least 15 games played. While this is partially due to the team’s poor goaltending during those minutes, he also deserves a portion of the blame as the Canucks bleed shots and scoring chances.
Boeser has never been known as a physical player or one that’s great in board battles. When he’s scoring, those issues can be overlooked. However as his scoring has dried up in recent years, it’s becoming harder to forgive him for his defensive mistakes and fight.

Last summer, the Canucks signed Boeser to a bridge deal that spanned three years at an AAV of $6.65 million. This high salary means that the Canucks are not going to get a massive haul in any return.
One team that could be interested is the New Jersey Devils. Trading him to an Eastern Conference team would almost definitely be the Canucks’ preference, and Boeser has been linked there in the past. The Devils could use a sniper to add to their top six and Boeser would also likely play in a shooting spot on the top power play unit, a position that he’s been moved from in Vancouver.
Most teams will need to send salary back to Vancouver to fit Boeser in but the Canucks could accept expiring deals to clear room for this summer. Miles Wood, Erik Haula, or Tomas Tatar all fit that bill from the Devils. In addition to the expiring salary, the Canucks would likely be looking to get back a few early to mid-round draft picks. The market for scoring wingers is not very hot, but Boeser does have a strong pedigree.
Make no mistake, Boeser has the potential to make you regret any trade as he has shown that he can have one of the best shots in the league when healthy. However, it’s a risk that the Canucks need to take to clear up cap space and add to their collection of young talent.
Editorials
Recent articles from Noah Strang