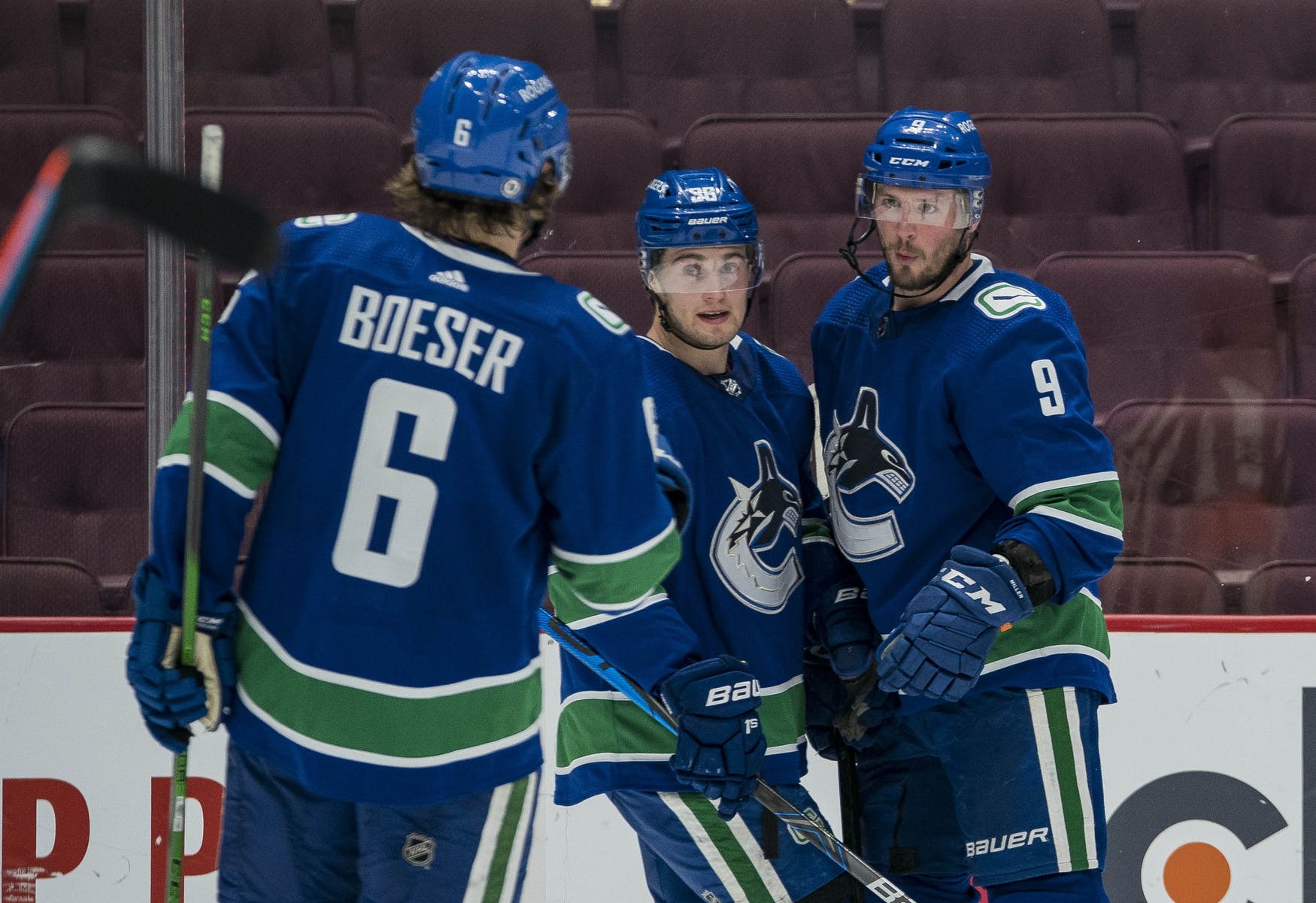 By Bill Huan
1 year ago
The 2021-22 NHL season is just a week away, which marks the start of a new era for the Canucks.
The club underwent major overhauls, and following Elias Pettersson’s new bridge deal, now has a definitive three-year window to compete. However, many questions still surround this roster, and there are three storylines in particular that will impact the Canucks’ success over the next few seasons.

The development of Vasily Podkolzin and Nils Höglander

Before you roll your eyes and type “duh” in the comments, hear me out: Podkolzin and Höglander’s development won’t just impact the Canucks’ success, but how the team plans on achieving that success.
To be more specific, the calibre of players that Podkolzin and Höglander become could force management to make tough decisions on other parts of the roster. Following Pettersson’s extension, the Canucks have now committed just under $29 million to its five highest-paid forwards. That’s a pretty reasonable number at the moment, but it gets a lot tighter when you consider that Brock Boeser will be an RFA next summer with a qualifying offer of $7.5 million and both J.T. Miller and Bo Horvat are set to become UFAs in 2023.
It seems unlikely that the team will be able to retain all of those players, and having one or both of Podkolzin and Höglander blossom into legitimate top-six wingers who drive play could make it more palatable for management to trade a more expensive piece for some blueline help or a cheaper forward replacement. Miller would be the most obvious candidate to move given his age, and if the Canucks do decide to pull the trigger, they should do it before the start of next season to maximize the return.
However, if Podkolzin and Höglander are merely complimentary middle-six wingers, the Canucks might instead decide to keep its forward group intact and find other ways to shed money, with Oliver Ekman-Larsson and Tyler Myers being the most obvious candidates to be moved. In this scenario, the team would somehow need to trade one of their expensive defenders while still trying to improve their blueline, which is a task that we definitely don’t envy.
Either way, the Canucks have some big decisions to make regarding their cap allocation, and Podkolzin and Höglander will play a big role in that.

The offensive progression of Jason Dickinson

After years of sheltering their bottom-six, the Canucks finally addressed their weakness by acquiring Dickinson from the Stars. With that said, the club’s depth is still mediocre at best, and Dickinson’s lack of an offensive game is one cause of that problem.
Looking at elite teams in the league, they all have one or multiple players in their bottom-six who are not only reliable defensively, but can also provide consistent secondary scoring and adequately play in the top-six when needed. For example, Vegas has Alex Tuch, Colorado has J.T. Compher, and Tampa Bay had their entire “third line” of Yanni Gourde, Blake Coleman, and Barclay Goodrow during their cup runs.
Goodrow is the only player on that list who scored less than 1.53 points per 60 at five on five over the past two seasons, and even he contributed at a decent third-line rate at 1.37 points per 60. In comparison, Dickinson produced only 1.14 points per 60 over that span, which is what you might expect from a fourth-liner.
Of course, Dickinson might be the best defensive player among those names, but the point is that he’ll need to expand his offensive repertoire if the Canucks want to ice a good bottom-six instead of just a passable one. One of Podkolzin or Höglander could be the answer to this issue if Dickinson’s scoring doesn’t improve, but like mentioned before, that’ll either create a hole in the top-six (if a more expensive winger is moved) or force the team to trade one of its defenders to open up cap space and retain all of their forwards.
The best possible outcome is for Dickinson to take an offensive leap while still retaining his shutdown abilities. If this doesn’t happen, then the Canucks will need to continue finding ways of improving their bottom-six.

The performances of Jaroslav Halak and Michael DiPietro

Jim Benning was rightfully lauded for the signing of Jaroslav Halak, but there are more question marks surrounding the backup goalie than some fans might think.
For starters, Halak saved seven fewer goals than expected last season in just 19 games played after saving 12 more than expected from 2018-20. Remember, goals saved above expected is a stat that doesn’t take team environment into account, so the veteran was legitimately one of the better goalies in the league during his first two seasons in Boston regardless of the stingy defence in front of him.
Unfortunately, that also means Halak took a massive step back last year, and at 36 years old, it seems more likely that that marked the beginning of a decline rather than just a down season. He also registered an alarming 0.905 SV%, so would it really shock anyone if that number dropped below 0.900 considering Halak went from playing on one of the league’s best defensive teams to potentially one of the worst?
If that happens, the Canucks will rely heavily on Thatcher Demko, whose career-high in games played in a season is 35 and who also has an injury history. It seems very possible that Michael DiPietro will see some NHL action if Demko’s banged up or Halak struggles, but there’s no telling if the 22-year-old’s ready to carry such a burden; Demko didn’t establish himself as a reliable backup until his D+5 season (DiPietro is currently in his D+4 campaign), and he didn’t lose an entire year of development to a pandemic either.
It’s important to note that what we’re projecting here is close to a worst-case scenario, but if it does happen, then the Canucks’ goaltending situation isn’t as stable as it might seem — both for this year and (depending on DiPietro’s development) perhaps next season as well.
All stats courtesy of Natural Stat Trick and Evolving-Hockey.
Uncategorized
Recent articles from Bill Huan