The Vancouver Canucks finally have the depth to use load management in 2021/22, but will they? 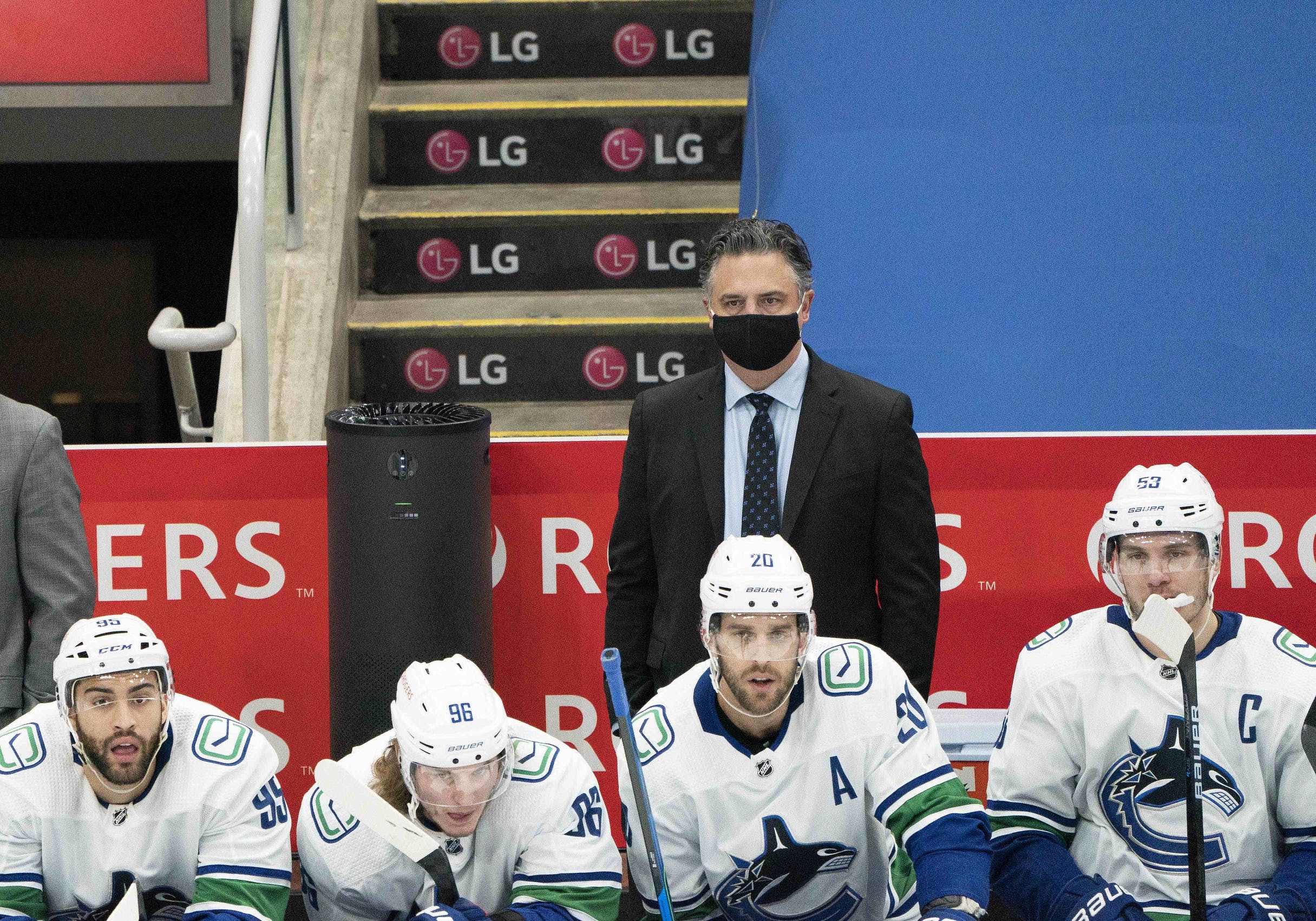 By Stephan Roget
1 year ago
Load management is a concept that has entered the vernacular of the modern sports fan primarily through its use in the NBA, but it’s made appearances in all sorts of sports. For the uninitiated, “load management” does not refer exclusively to the practice of giving Kawhi Leonard the night off when he asks, though we can see why you’d think that. Instead, load management has its roots in modern sport science, and involves the occasional use of a targeted rest period longer than the space between games to maximize performance, reduce wear-and-tear, and prevent injuries. So yeah, it’s sitting out games, but specifically those games deemed most likely to lead to long-term problems.
Professional hockey, perhaps the most physically taxing team sport in the world, seems like a natural fit for load management, and yet the NHL has been oddly reluctant to adopt it as a tactic. This is a league, after all, that still suspends its players for missing the All-Star Game. Skipping a regular season game is almost unthinkable. There’s also the notion that NHL players can load manage by simply skating fewer minutes, rather than taking entire games off.
But the Vancouver Canucks, through the mass addition of quality players to all rungs of the depth chart, have a greater ability to employ genuine “games off” load management in 2021/22 than they have in nearly a decade, and it’s an opportunity they should really make the most of.

Why load management? Why now?

The 2021/22 season is going to be a fairly unique one. Each team is transitioning from a 56-game regular season (and another shortened one before that) to a full 82 games, and that right there is going to cause problems for some.
Then there’s the amount of travel, which will be greatly increased now that interdivisional play is back, limiting rest and rehab time. Of course, that’s an issue that tends to impact the northwesterly Canucks more than the average club.
Then there’s the rather extreme COVID-19 outbreak that impacted the health of several Vancouver players and is probably still having at least some lingering effect.
It all adds up to a team that will need as much rest as it can get.
Having some of the older players — like Brandon Sutter and Travis Hamonic — or anyone nursing an injury sit out the back-half of a back-to-back could ensure that those players are still in good health when the games get more important.
There’s also the performance portion of load management to consider. We can all admit that the Canucks bit last year, and scattered amongst an overall shoddy team effort were several stretches of atrocious individual play.
Remember those weeks when it seemed like JT Miller was giving the puck away about 17 times a game?
Or how about all the occasions on which each member of the top-four — Quinn Hughes, Nate Schmidt, Tyler Myers, and Alex Edler — decided to play sub-AHL-quality defence for a while?
Players need to watch games from the press box sometimes in order to get back on track. Coach Travis Green and his staff have been hesitant to healthy scratch their starters in recent seasons, but we hope those days are over.
Sometimes, reducing minutes isn’t enough.
Let’s zero in on Hughes in particular. Everyone can agree that, as far as his own end of the ice goes, he’s still got some lessons to learn. That’s fine. He’s 21 years old. He’s got time to learn.
But last season, Hughes went through some stretches where he was being absolutely buried in goals against on a nightly basis, and he still kept being thrown out there for 20+ minutes a game. And it’s awful hard to learn how to swim when you can’t keep your head above water.
There were absolutely times in 2021 when Hughes — and Miller, and Myers, and Schmidt, and… — could have benefitted from a night off, whether they liked it or not.
It was clear, however, that Green didn’t really love the options he had as replacements, and so players had to play through their struggles.
This year, things are different.
Up front and on the blueline, Vancouver has more depth than they’ve had in a good long while.
Depending on how training camp and subsequent waiver claims work out, the Canucks stand to open up 2021/22 with four extra NHL-quality defenders and about eight extra NHL-quality forwards in the mix.
With the Abbotsford Canucks next door, call-ups have never been easier. The goal should be occasional load management for the top-end of the roster and as much churn at the bottom as roster movement rules will allow, ensuring that everyone stays fresh and effective all season long.

The Canucks have countless candidates for load management.
We’ve already outlined the case for Hughes, and who could argue against the odd “settle down” scratch for Myers?
Elias Pettersson is another curious case. He’s coming off a mysterious upper body ailment, he shoots an awful lot, and he hasn’t had a typical summer of training. As counterintuitive as it might seem to give your best player a night off, it’s worthwhile if it keeps Pettersson at his best through April.
Sutter, Hamonic, Myers (again), and Oliver Ekman-Larsson all make some sense based on their age.
Others can be played by ear.
The when isn’t too difficult to figure out. Load management usually comes into play on back-to-backs, of which the Canucks have 11 in 2021/22. Obviously, no one is talking about keeping Pettersson or Hughes out of 11 games.
But one or two? That seems manageable. Load manageable.
It’s the how that Green and Co. will find most difficult. Hockey players are a prideful bunch, and healthy scratches are something to be avoided at all costs. Culturally, it’s going to be hard to keep any player out of a game and have them not take it as a slight.
The solution to this could be to simply make it a part of the team culture from the get-go. Inform players that load management is going to be part of the strategy this season, and then do it. The players should get used to it, and sometimes the insult factor might actually come in handy.
In many ways, load management goes against everything that hockey players were brought up to believe in.
But that just means the first team to start using it in earnest will have an edge over everyone else.
Maybe, just maybe, it will be the Canucks.

Even if the Canucks don’t employ load management in 2021/22, they might just employ a strategy that we’re going to call “reverse load management” — as in, stuffing extra games into a player’s schedule.
Both Jack Rathbone and Vasily Podkolzin are waivers-exempt, and both of them could be playing fairly low minutes on the deeper Vancouver roster for most of the year.
Want to get them more developmental minutes?
It’s as simple as Ubering them over to Abbotsford for a weekend.
Any time that Abbotsford is on-ice at home and the Adult Canucks aren’t playing for a few days should be seen as an opportunity to send Rathbone and Podkolzin down for some top-line experience without actually having to demote them.
The more minutes the better, especially for two prospects who had theirs limited by very different circumstances last season.
And we have to imagine that the fans in Abbotsford wouldn’t mind.
Uncategorized
Recent articles from Stephan Roget