The Statsies: The Canucks sneak away with two points on the road vs. Carolina 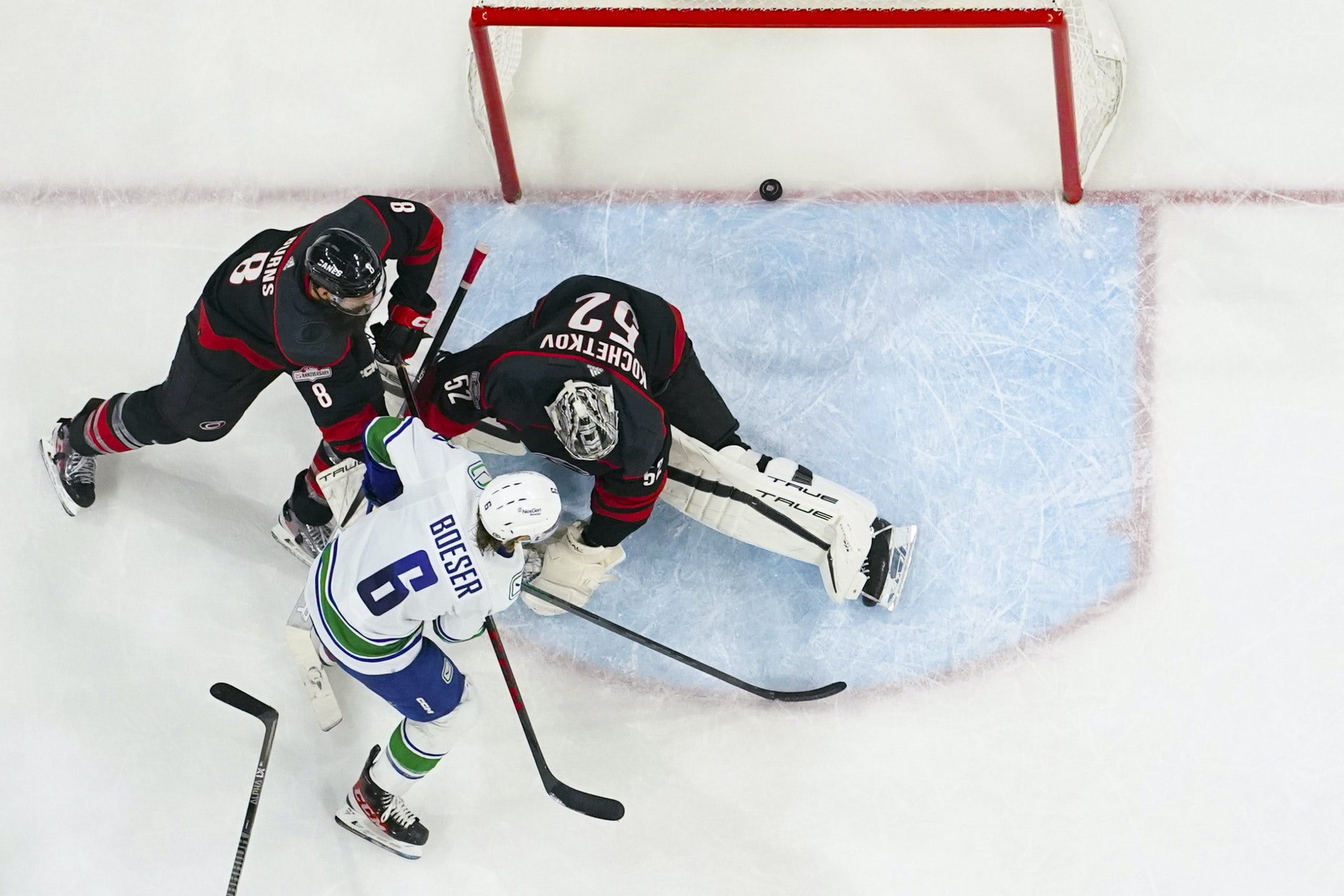 By Michael Liu
18 days ago
Be sure to check out NHL betting odds site Betway for the latest Canucks game day odds!
It might not be the best result for the future, but given the day’s news and the team’s state, this was a breath of fresh air.
The Vancouver Canucks closed out their road trip of nightmares with a win in Raleigh, taking down the Carolina Hurricanes 4-3 in a shootout. It definitely didn’t look like it was going to be a win at times, but credit to this team for pulling through and earning two points. The cloud still looms large over the Canucks on many fronts. But, for now, there’s a slight reprieve from the constant misery of losing.
Here’s the win by the numbers.
As always, you can find our glossary guide of advanced stats here.

You never really know what you’re going to get with Vancouver. This game started differently than most games on this road trip, where the Canucks just went down early and didn’t look like they were up to play a hockey game. The penalty kill late in the first period was solid, but after that, it looked like the Hurricanes would run away with it. There was a massive spike of momentum in their favour coming out of the first intermission which looked to seal the deal.
Then, suddenly, Vancouver found their legs. After another successful penalty kill, the Canucks found the momentum favouring them. A sharp drop down in both the CF% and xG trend lines reflects their improved play, a streak they rode to their opening tally of the game. They arguably outplayed the Hurricanes through the rest of the third and overtime, though they never got a positive share of CF% or xGF% out of it. 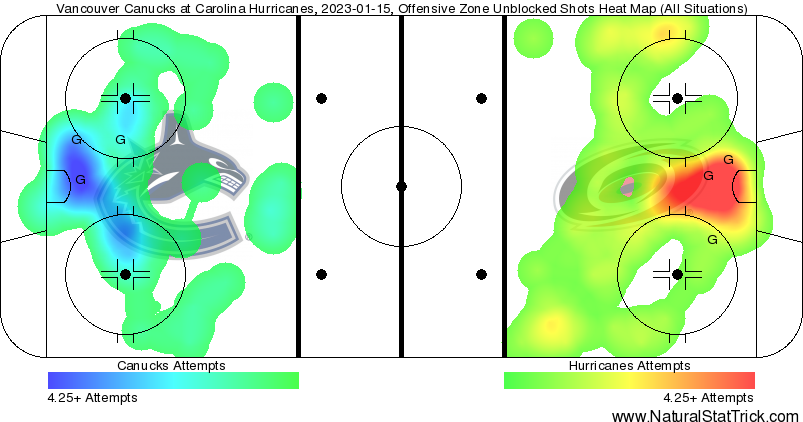 It’s a better heatmap to look at in this matchup against Carolina. Vancouver actually split equally in terms of high-danger chances with the Hurricanes, both teams finishing with 15 apiece. As such, the distribution makes sense, with similar concentrations coming at similar spots. If there is one thing the Canes did better than the Canucks, it was focusing it down through the slot, while the Canucks had this weird little patch out to the left faceoff circle. It wasn’t bad, and definitely an improvement for Vancouver last afternoon.
However, there is still a big point of concern. The Canucks still got heavily out-chanced (34-27 SCF in favor of Carolina), and at 5v5 play, their hotspot vanishes. On the flip side, while the Hurricanes’ hot spot does grow a little lighter, it’s still there, showing that in yet another matchup, the Canucks got outplayed at 5v5 action. This has been a common theme for this team this year, and one that they have yet to address. 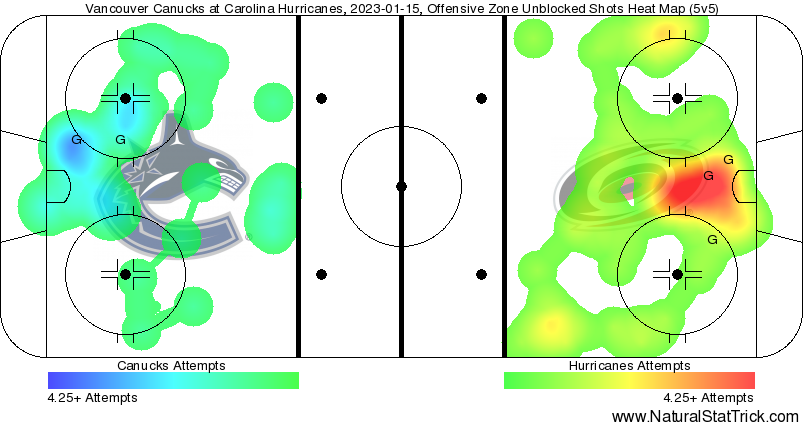 Corsi Champ: He’s a man on a mission. Brock Boeser continues to defend his Corsi title, coming in with a team-leading 56.62 CF%, stacking up to a 21.12 CF% rel. It was his goal from in tight that sent this game to overtime, contributing a total of 9 scoring chances for the Canucks when he was on ice. Boeser also finished with the 4th highest raw GF of any Canuck (0.95), making good use of his puck possession advantage. The winger happened to be one of only 6 Canucks to finish with a CF% rate over 50% against the Canes.
Corsi Chump: This one is very odd to me for reasons that I will touch on later. Conor Garland finishes as the Corsi chump, a 29.73 CF% comfortably giving him a -19.02 CF% rel. Garland got destroyed this game, recording the third-highest xGA on the team (1.57) and the worst SCF% (26.32), facing 14 scoring chances of which 7 were high-danger. He was on ice for only one goal against, which should be a miracle considering how bad his metrics were in this one.

xGF: After a couple of rough statistical games, Curtis Lazar finds himself recording the best xGF% of any Canucks with a 75.94. This is especially interesting as the majority of his minutes came against Svechnikov-Stastny-Necas, the second line of the Hurricanes, and a role in which Lazar struggled hard in previous games. And yet, Lazar finished with the third-lowest xGA (0.28) and the 7th highest xGF (0.9) on the team, facing only 1 HDCA. A strong rebound performance on the road, all things considered.
GSAx: Colin Delia is balling out. With a 4-2 record with the Canucks so far this year, he adds another good performance under his belt in this shootout win. Delia faced a 3.03 xGF from the Canes, and with the 3 GA he gave up, that’s a 0.03 GSAx. Sure, it’s basically on par with what was expected, but that’s a fine performance in the light of some rough ones on this road trip. If it wasn’t for Delia, the Canucks very well couldn’t have even ended up in a shootout.

Getting demolished by inferior competition: JT Miller, Bo Horvat, and Conor Garland were put together, a combination that worked pretty well in the past. On top of that, they also matched up against the third line of the Canes (Martinook-Kotkaniemi-Fast). In theory, they should’ve dominated that matchup. Instead, that line was caved in at 5v5, the worst of any Canucks unit last afternoon. Miller-Horvat-Garland was putrid all across the board, giving up a 28.13 CF%, 1.36 xGA, 20.08 xGF%, 12 SCA, 29.41 SCF%, and 7 HDCA, all team worsts. It feels absurd to say that especially considering the quality of their opponents and the talent that they have, but it’s the story that the stats tell in this one.
You can bury the Kuzmenkshow…: But the Kuzmenkshow never stops. Stuck next to Jack Studnicka and Sheldon Dries, Andrei Kuzmenko continued to drive positive offensive play. Neither of his linemates was even in his stratosphere when it came to offensive contributions. Kuzmenko had the third-highest xGF% (71.58), with the nearest linemate being Studnicka’s 50.69. Not only did Kuzmenko record 7 scoring chances, he also didn’t face a single high-danger chance against while sending three the other way. All this came in 13:49 of ice time, the 6th lowest on the team. With 2 assists in that span, there should be no reason why Kuzmenko doesn’t get more action.
Who else had a rough time with Carolina’s third line?: Yeah, it’s probably who you thought it was. The reunion of Oliver Ekman-Larsson and Tyler Myers had some pretty bad results in their 16:51 together. The pair finished with a 31.43 CF% in their time together, a 1.27 xGA on 13 scoring chances against. As the prompt suggests, they too got absolutely buried by Martinook-Kotkaniemi-Fast while on ice, recording approximately 20.00 CF% against the trio. Perhaps it’s Bruce Boudreau waiting for the axe to drop, but the fact that this pairing is getting as much leash as it gets is tough to see.

CF% – 42.74% HDCF% – 50.00% xGF% – 48.64%
The Vancouver Canucks managed to come from behind in a game that threatened to get away early. Credit where credit is due, this team has not done enough of this thus far into the season and is a pretty good change to see when they’re on the right end of one of these results. It’s a win that still shows many of this team’s glaring flaws, but being able to win in spite of these warts is a pretty nice treat.
With the road trip from hell over, the Canucks have a small break before the Tampa Bay Lightning come into town on Wednesday.
Stats provided by naturalstattrick.com
Editorials
Recent articles from Michael Liu