The Statsies: Where the Canucks play their best statistical game 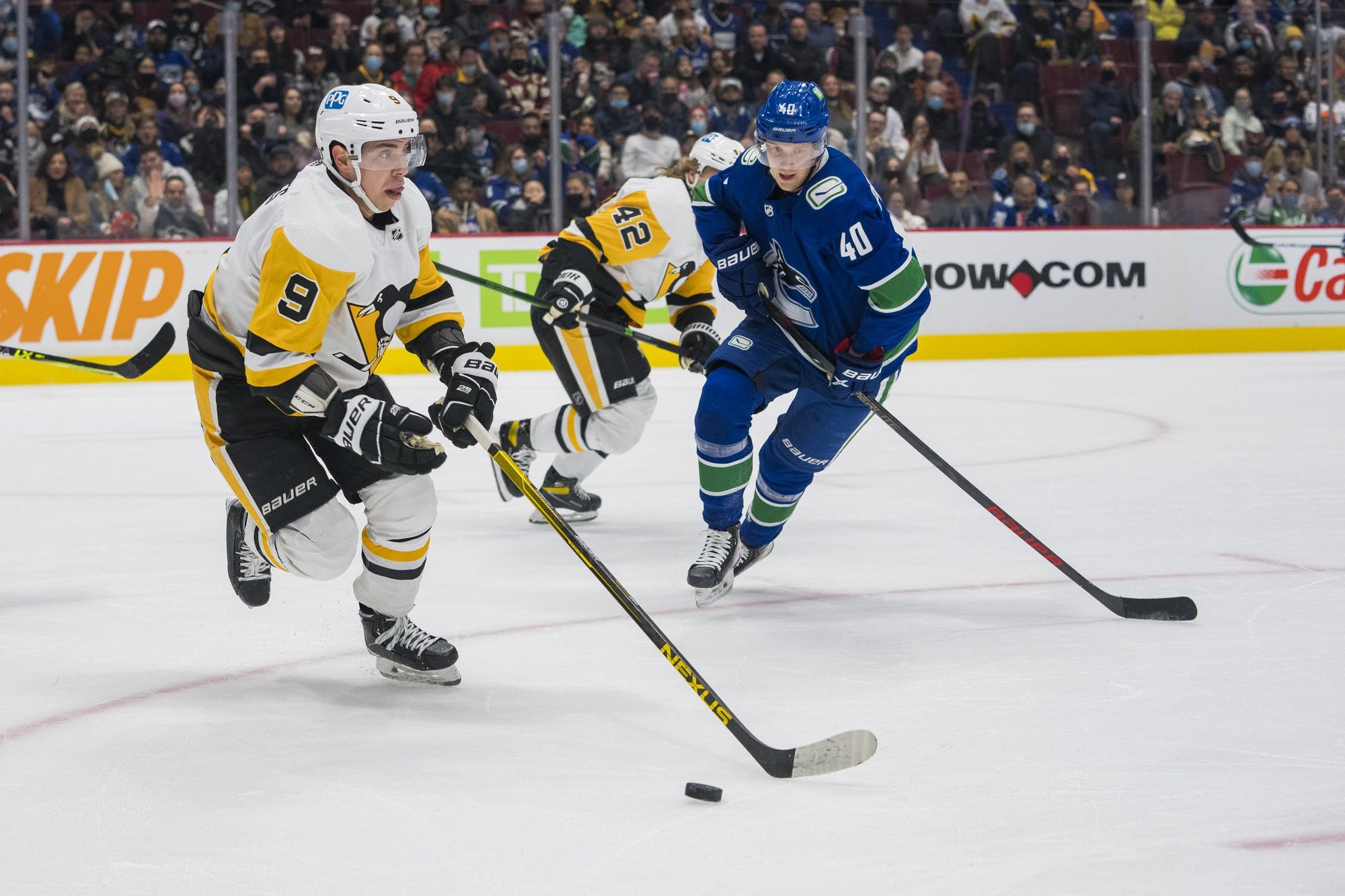 By Michael Liu
3 months ago
Welcome to The Statsies, brought to you by NHL Lines site Betway!
Back-to-back wins seem like a pretty darn good way to buck a losing skid.
A 5-1 victory over the Pittsburgh Penguins is a big result for this group, who now look to try and claw themselves out of this hole they’re in. The Canucks also put together their best effort through 60 minutes, and it shows on the statsheet.
Here’s how it all unfolded.
As always, you can find our glossary guide of advanced stats here.

Vancouver knew that they not only had to get off to a strong start, but be able to hang on even when the momentum shifted against them. This is the first game flow map that has reflected a consistent, 60-minutes of good hockey and it should come as no surprise that the Canucks were able to deliver their biggest win yet. Their two goals in the late first and early second period marks a period where they played great hockey, getting good dangerous opportunities while retaining puck possesion.
The biggest trend bucker here however is after the Pittsburgh goal in the second period. The momentum clearly shifted in favour of the visitors, and in previous games you’d see a big dip in not only possession but xG. This game however, though the Canucks did dip into a valley, they actually managed to wrestle xG back into their favour. What this means is that Vancouver ceded the puck possession advantage but made sure that they not only defended well, but efficiently used their opportunities in high-danger scenarios. The high-danger scoring chances balance in the third (6 for, 2 against) reflects that well. 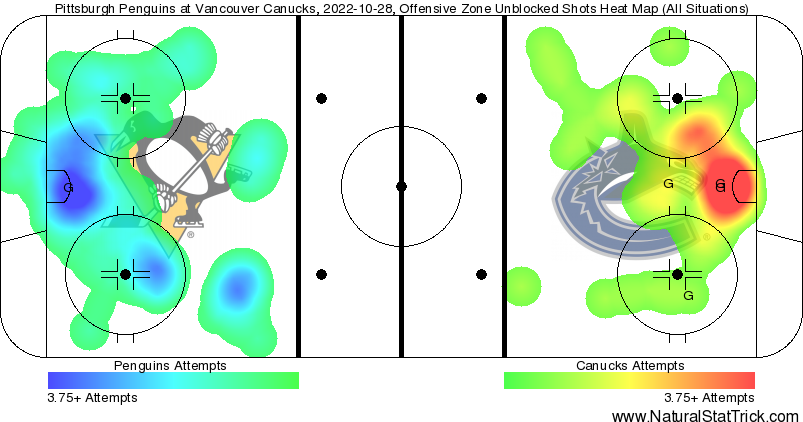 It’s incredible what you can do when you play good team defence. Yes, the Canucks gave up a blue bubble in front of their own crease, but like the last two games, it isn’t that deep blue that is a high-density of opportunities. For the most part, though Vancouver did give the Pens the shots that they needed, the Canucks weren’t just letting them have free rein. It’s also encouraging that this came with Spencer Martin in net, meaning that the team wasn’t going to let their backup face an onslaught from high-danger areas.
As for the offensive side, the Canucks finally managed to get a hot spot in front of the crease, and it is such a beautiful thing. Take a look where the home side got their goals – outside of a shot from the right faceoff dot, everything came in the slot/low-slot area. It’s exactly where you want to be shooting from, with most xG models putting those chances as the ones with the highest probability of scoring. Vancouver did that tonight, and were rewarded handsomely for it.

Corsi Champ: I’m not going to count Dakota Joshua for this one since he only played 7:51 minutes. This game’s champ is… wait, JT Miller? Miller and Bo Horvat are tied as the team leaders in CF% (50.00), but Miller edges the captain out thanks to a 15.57 CF% rel, just surpassing Horvat’s 13.77. What this means is that Miller was more impactful in terms of puck possession when he was on ice compared to Horvat’s impact. It was nice to see Miller this engaged on offense and defense, especially with his line being in a matchup role against the Sidney Crosby unit.
Corsi Chump: In each game, there has to be a chump, and unfortunately this one belongs to Nils Höglander. Going from the second-worst CF% to the worst CF% tonight, Höglander hasn’t exactly been in a groove as of late. His 13.33 CF% put him at a -32.41 CF% rel, which is compounded by the fact that his xGF% (28.92) was second-to-last with the exception of the checking center Nils Åman. Just not ideal for Höglander as he looks to be in Bruce Boudreau’s doghouse.

xGF: Speaking of xGF though, Sheldon Dries led the Canucks in xGF% (85.73) last night. If you’re thinking that this is because he got powerplay time, Dries also led the Canucks in xGF% at 5v5 play (79.45). Special shoutouts go to Jack Rathbone, the second place finisher with 77.87 xGF% and an excellent xGA of 0.35 to go with it. As well, JT Miller led the entire team in raw xGF (2.91), which is impressive considering the matchup he was facing against.
GSAx: I know that a goaltending controversy isn’t exactly in the cards for Vancouver, but hats off to Spencer Martin for an outstanding effort between the pipes. The netminder made 34 of 35 saves, conceding one goal on an expected 3.20 goals against. This means that Martin has a 2.20 goals saved above expected, stealing just over 2 markers from the Penguins. It’s the sort of effort that this team needs to get from time to time, though offence wasn’t the issue tonight.

Bo’s big night: Thought Bo Horvat might not have led the Canucks in any of the previously mentioned categories, the captain certainly led by example. Horvat’s two goals were key to this team’s success, and it wasn’t as if he was analytically poor either. With the shared team lead in CF%, Horvat also tied for the team lead in HDCF (7) and was a close second in xGF (2.8). The big reason why he isn’t higher up on any of the rankings is the 10:46 minutes he spent stapled to Crosby. Horvat’s CF% plummeted to 33.33 against the first line of the Penguins, but was able to limit them to only 2 high-danger chances. Not a bad night, all things considered.
Context for Schenn: By most measures, Luke Schenn was the worst defenceman statistically for the Canucks. Though his CF% was middle of the pack (39.47), Schenn was team-worst in in xGA (1.64) and SCA (16). However, this all being said, Luke Schenn spent most of his night up against Evgeni Malkin and Rickard Rakell. During his 12:10 against Malkin, Schenn’s CF% plummeted to 23.08, gave up an xGA of 1.51, and 14 scoring chances with 6 of them being high-danger. Basically, the biggest reason why Schenn’s numbers looked as bad as they did was because of Malkin, who accounted for all the high-danger chances that he would give up.
Mikheyev on the PK: Hey, would you look at that. Ilya Mikheyev featured much more prominently on the pentalty kill this game and showed why he has the reputation he does. Among players that killed more than 2 minutes, Mikheyev was second in xGA (0.5), only coming behind Tyler Myers’ 0.29 xGA. His 2:22 was also the second-most minutes by a forward, with Horvat’s 3:01 edging him out. It’s obviously a small sample size, but Mikheyev’s speed and defensive instincts should be a bigger feature on this special teams, especially amongst the forwards.

CF% – 41.28% HDCF% – 47.83% xGF% – 54.5%
The Canucks yielded the possession battle but secured a win thanks to opportunisitc goal scoring from dangerous areas. A big win like this is getting the momentum built, and goodness knows that Vancouver could use some momentum after the start they’ve had. They’ll be staying at home with some extended rest, as their next game will be against the New Jersey Devils at home on Tuesday. Now, can they keep the ball rolling?
Stats provided by naturalstattrick.com
Editorials
Recent articles from Michael Liu