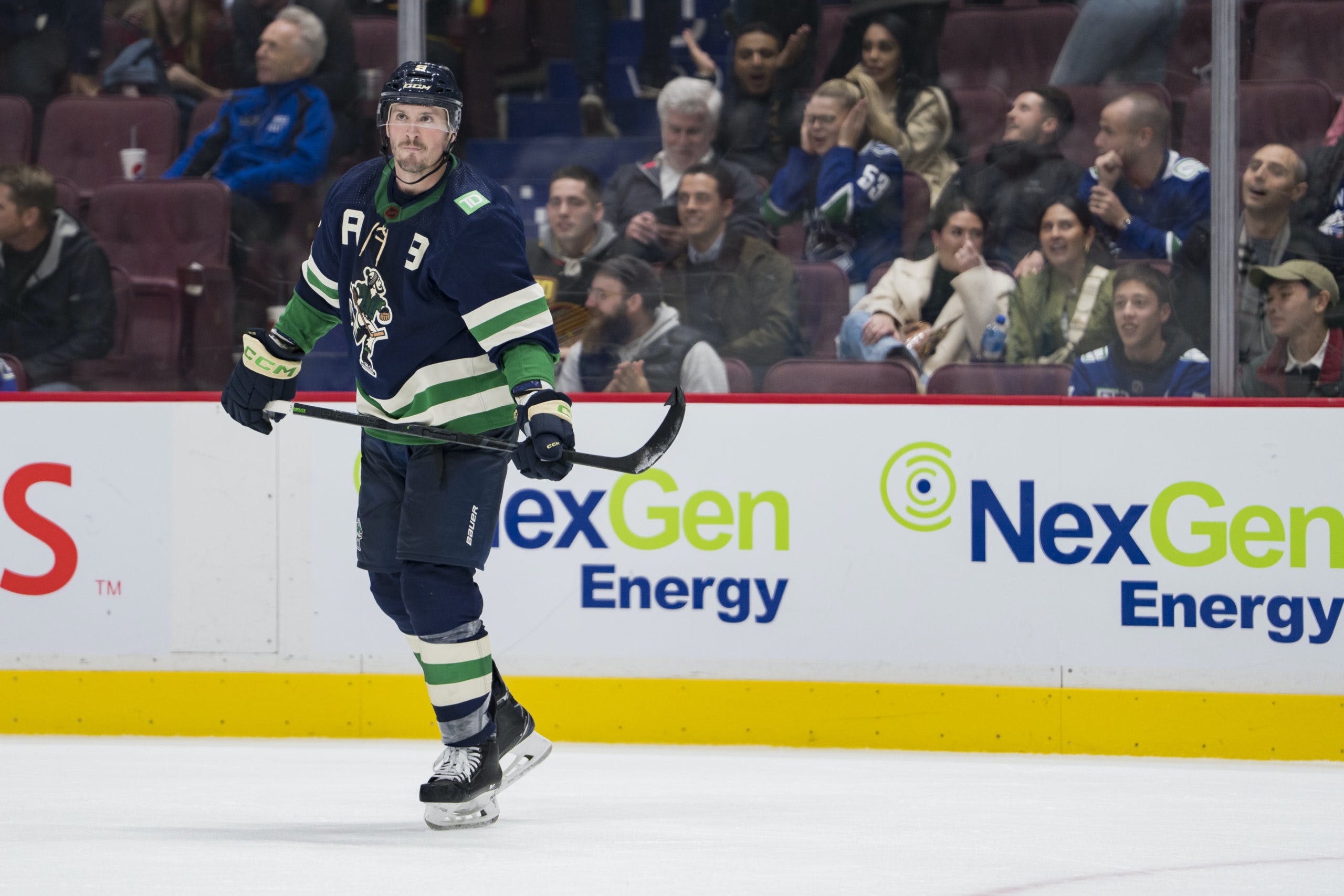 By Michael Liu
1 hour ago
Welcome to The Statsies, brought to you by NHL lines site Betway!
Even management can’t bear to put in a full 60-minute effort.
For a moment, it looked like the Vancouver Canucks would battle back from adversity, clawing their way to another win in a game where the ice was tilted against them. Instead, the Vegas Golden Knights come into Vancouver and showed why they are the class of the Pacific Division, taking this game 5-4. It’s the 7th multi-goal lead that this team has surrendered, and comes as another reminder that they’ve got a long way to go even to be a bubble team.
Here’s how the loss played out by the numbers.
As always, you can find our glossary guide of advanced stats here.

Honestly, the Golden Knights probably should’ve run away with the scoreline. There wasn’t a single point where the Canucks really managed to wrestle the momentum from the visitors, getting shelled through the first two periods in puck possession and expected goals. The fact that they were down only one goal going into the third is quite something, considering Vegas had 28 scoring chances and 14 high-danger ones, while Vancouver only managed 11 attempts and 3 high-danger chances.
Like in previous games, the Canucks were able to battle back and into the lead, playing some opportunistic hockey. It should be no surprise to see that Fenwick line tick up since that was one of the only times Vancouver ever managed to make a positive difference in their puck possession metrics. However, that would quickly stall out. Those three unanswered goals were back-breaking for Vancouver, who looked to deflate with each successive goal. There was a late rally present, but like with many aspects of this team, it was too little, too late. 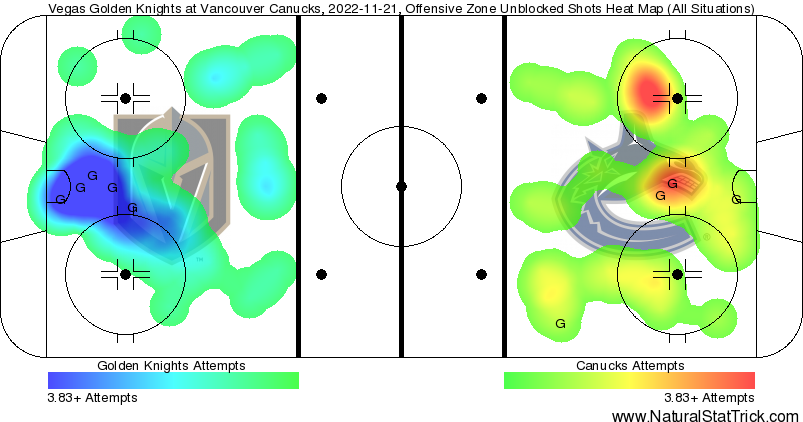 Oh boy. I don’t even know where to start with this. Thatcher Demko’s crease is engulfed by the “Slot Lake.” Vegas absolutely had their way in terms of high-danger chances and attempts last night in the Canucks end, suggesting a complete breakdown in defensive structure. Though there were more than a couple of moments where the defencemen looked bad, this suggests more of a team defence not clicking together. A lot of these attempts could’ve been prevented had a forward stuck with their assignments.
Meanwhile, Vancouver got “lucky” according to the xG models. Even without establishing a hotspot, the Canucks were able to score four goals. It should come as no surprise, as Vancouver is one of the league leaders in goals scored above expected. What this essentially means is that the Canucks tend to get goals from areas that are less likely to result in goals. There’s no telling if it’ll stop, but the team would like to see a lot more attempts from high-danger areas to make their scoring ability a repeatable outcome.

Corsi Champ: Defensive defencemen don’t usually have great Corsi metrics. But, Luke Schenn clearly is a generational talent and should be recognized as such. Schenn led all Canucks with a 64.52 CF%, which is no easy feat, especially against a team like Vegas. He was also solid at 5v5 play (66.67 CF%) while soft-matching against the Pietrangelo – Theodore pairing, recording a team-low xGA of 0.42. It was a good night for Schenn, who also managed to chip in offensively with a goal. Not bad for a guy who took a puck off the noggin.
Corsi Chump: This is a game that Ethan Bear would probably like to forget. It’s tough to decide who was worse on the OEL-Bear pairing, in all honesty. Ekman-Larsson wasn’t far from his partner in CF% (34.38). But Bear would record a team-low 25.93 CF%, a significant -27.73 CF% rel in comparison to the rest of the team. Bear would record the fourth-lowest xGA on the team with a 1.62 as well. But, he’s also saved by Tyler Myers and OEL placing worse than him. (1.62 and 1.76 respectively). It’s interesting to note that Bear didn’t see the ice at all until halfway through the third, with a big chunk of shift-time missing for him. He recorded the lowest TOI by a defenceman (16:08), with Luke Schenn not far with 16:31.

xGF: This is going to go to Andrey Kuzmenko last night, on the back of a strong 64.73 xGF%. This comes not only because of his second-place xGF (0.96) but also due to good defensive work resulting in a 0.52 xGA. Kuzmenko would give up 11 scoring chances, with four of them high-danger, but also managed to generate 5 high-danger chances as well, including a nice goal off a feed from Brock Boeser.
GSAx: Thatcher Demko was not the problem in this game. Unfortunately, the statistics will not be kind to him once again. Though Vegas had a lot of high-danger chances for, they only managed to accumulate an expected goals-for of 3.57. What this means is that Demko posted a -1.43 GSAx on the night, further pushing him down amongst the goalies around the league. It sucks because he did play really well. Unfortunately, the team in front of him couldn’t help him in the defensive zone. Four of the five goals came from a high-danger chance, while only one middle-danger chance got through the netminder.

Eichel proves too much to handle: Though the Corsi matchup suggests that Horvat’s line matched up decently against Vegas’ top unit, the expected goals metrics tell a different story. Taking Jack Eichel alone, the star centerman racked up 4 high-danger chances against Horvat, and a whopping 7 against JT Miller. It should come as no surprise that Miller finished this game as the worst Canuck in xGA (1.80). Horvat and Miller combined to give up 20 scoring chances to Eichel, and the offensive gravity of the American center was able to open up space for his teammates. While both Canucks have shown that they’re fine two-way players, some matchups are just too much for one line to handle.
Balanced, like all things should be: It’s strange that Elias Pettersson’s two-way effort doesn’t get the numbers that are expected. Alongside Kuzmenko and Ilya Mikheyev, this line actually broke even on CF% (50.00) and HDCF% (50.00). This isn’t bad though, as it shows that Kuzmenko-Pettersson-Mikheyev were able to limit their chances against to the perimeter, giving up a total of 10 during their time at 5v5 play. Where this line shines is their xGF%, a 62.85 leading the team by some margin. Their xGA is by far the highest on the team (0.42), but so too is their 0.71 xGF. It’s a byproduct of playing 13:21 minutes together, the most of any line combination against Vegas, as with additional ice time comes additional chances on both ends. Credit this line for being able to come out on the positive side of the equation.
A rough night for a trio of defencemen: Yes, there are more glaring issues than just the defencemen. Forwards aren’t coming back and supporting their teammates, getting lost in their own zone and losing their coverage to give up easy chances without resistance. However, it is worth noting that three defencemen in particular had a really rough go at things. We’ve mentioned Bear already with his poor CF%, but OEL and Tyler Myers were also not great. It feels as if these three each did poorly in one specific category as well. OEL was the defence-worst in xGA, and Myers bled a team-high 12 high-danger scoring chances against. Suboptimal, to say the least.
There’s this great image of Myers yelling at Stillman to get into position on the 5th goal, while simultaneously losing track of the weak side. I will say that goal does also fall on Boeser’s shoulders as well, but it feels like a microchasm of a weak defence unit showing more and more of its cracks. Myers and Quinn Hughes were the only two defencemen to crack 20 minutes on the night, with OEL posting 18:49 TOI in third place. Not the greatest of looks when two out of the top three minute munchers are looking shaky in their own end.

CF% – 46.79% HDCF% – 23.08% xGF% – 30.27%
The Golden Knights looked and played like the better team last night. Unlike the Spanish Inquisition, the numbers all suggested that Vegas’ victory was expected. There are still positives to take away from this game, with Pettersson’s two-way game continuing to flourish, Schenn playing as if he were a young 5th overall selection again, and some good performances by complementary pieces. However, it feels like a meagre consolation as this team yet again finds another way to lose. A team with three players on pace to score 40 should not be in the predicament that the Canucks currently find themselves in.
Vancouver heads back on the road after a short two game homestand, heading into the mile-high city to take on the defending Cup champs. They’ll hope to not get buried by the Avalanche on Wednesday.
Stats provided by naturalstattrick.com
Editorials
Recent articles from Michael Liu