The Statsies: The Canucks lose a game of hockey that they never looked poised to win 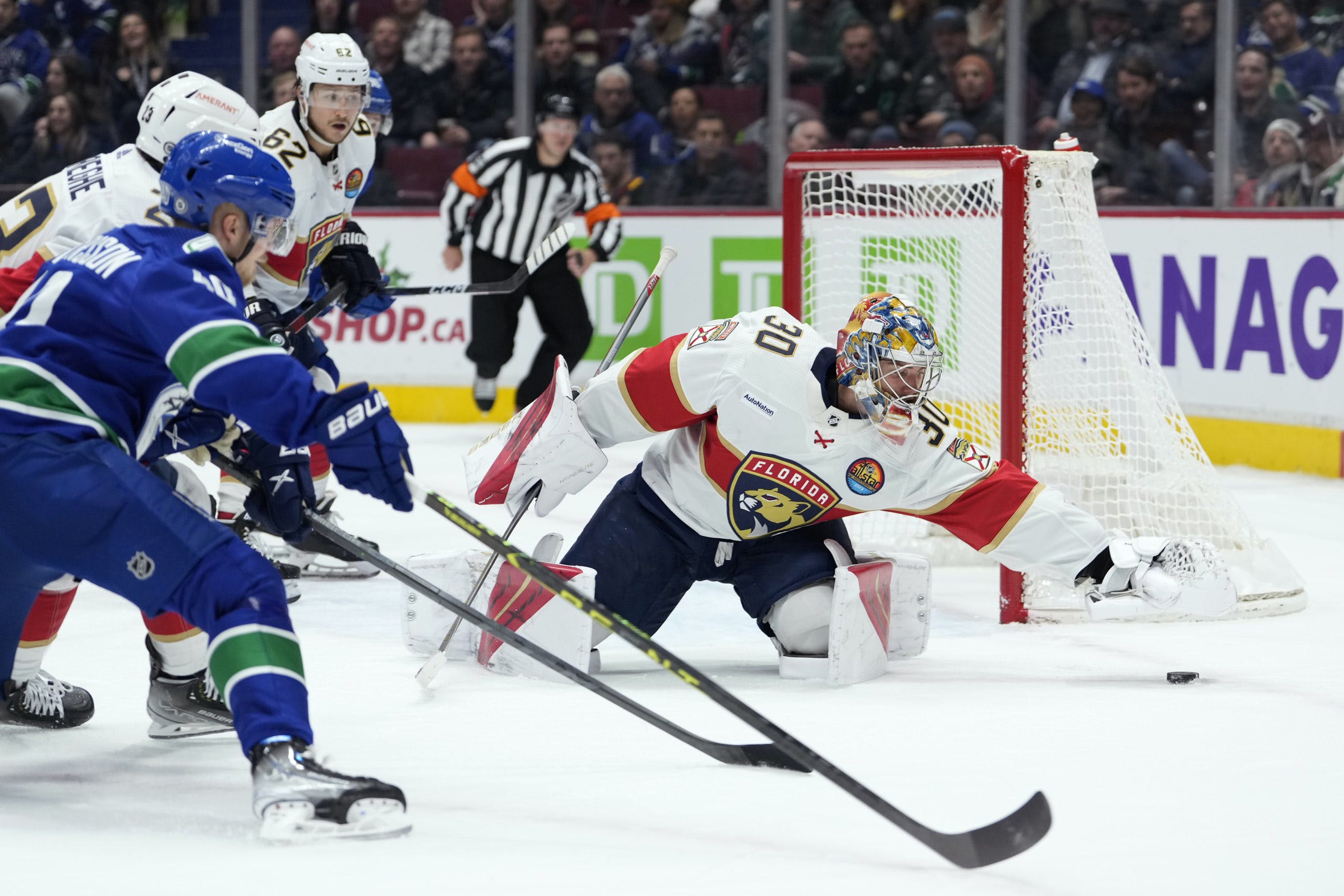 By Michael Liu
1 month ago
Be sure to check out NHL lines site Betway for the latest Canucks game day odds!
It might’ve been hall of fame night, but that performance was anything but hall of fame worthy.
The Vancouver Canucks, once again, didn’t start on time and were made to pay for it by a better Flordia Panthers team. In a span of 3 minutes, the home team saw all the wheels fall off the wagon with no way back into the game, dropping another 5-1 decision in the end. Now, we’re left to wonder if the road trip was the aberration this entire time.
This is how the loss played out, by the numbers.
As always, you can find our glossary guide of advanced stats here.

The start of the first period looked okay, but make no mistake: Florida was ready to play last night. Only the brilliant play of Thatcher Demko kept the game scoreless early on after the Canucks seemed content to bleed chances in front of him. That could only last so long with the Panthers striking thrice to close the period, in which Demko also got hurt. It was a devastating sequence of events that seemed to be the death knell of this season’s hope for Vancouver. Florida finished the first period with an absurd 9-0 lead in high-danger chances for, controlling a 66.67 CF% share and holding 14 scoring chances for in comparison to the Canucks’ 2.
There was some pushback late statistically for the Canucks, but it didn’t really make a difference. After the first intermission, the Panthers still controlled the flow of the play, putting up a 4th goal before Vancouver managed to break Spencer Knight’s shutout. Vancouver worked their way back into the puck possession battle, bringing the CF% back to even by the game’s end. However, what this also shows is how effectively the Panthers were able to shut down their scoring chances. Despite the increase in possession, the Canucks didn’t see a similar increase in xGF, which suggest that nothing they did was dangerous enough or high-percentage enough.

How many times can a team give up chances in front of the net before giving up a goal? It feels like Vancouver takes that question as a personal challenge each and every game with how many shots they give up in the low slot area. Demko and Spencer Martin have been bailing out this team for long enough, to the point where the former is now out with injury. Again, while there are shortcomings with how the defence corps is constructed, this is much more reflective of a team defence structure collapsing. Far too often they give up too much space, or miss an assignment that leads to a high-danger chance against.
Vancouver also isn’t generating enough chances to outscore their defensive issues. They only managed to record 7 HDCF in comparison to Florida’s 18, which is pretty bad efficiency considering that the Panthers had 36 scoring chances to Vancouver’s 20. The Canucks put together a 1.03 xGF in the final period – which isn’t bad in a vacuum, but they also gave up 1.85 and 1.44 xGA in the periods prior. This team just isn’t getting sustainable chances, which leads to unsustainable success offensively.

Corsi Champ: This game’s champ is JT Miller, coming in with a 70.59 CF% to lead the Canucks. However, even though he controlled the puck a lot, Miller actually didn’t generate many chances. His 8 SCF is middle of the pack for Vancouver and with only 4 of them being high-danger, it suggests that Miller isn’t making the best use of his time with the puck. On top of that, the winger gave up 5 high-danger chances again, which isn’t promising when your biggest asset is being able to out chance and outscore opposing lines.
Corsi Chump: This game’s chump title belongs to Curtis Lazar, with a 36.84 CF% giving him a -16.35 CF% rel to his teammates. Now, this isn’t the best of looks, but this is expected when over half of your 11:07 TOI is spent against the Panthers’ first line. I really don’t have an answer as to why the fourth line was deployed like this, but they sure as heck weren’t doing much leg work defensively. On top of posting the worst CF%, Lazar finished with a team-low xGF% of 15.01, meaning that Florida had an 84.99 xGF% share while he was on ice.

xGF: Brock Boeser takes home this game’s xGF award, coming in at a 63.30 xGF% to finish off the night. Against the Panthers, Boeser saw ice time with Miller and Bo Horvat, although they were soon separated in favour of old line combinations. The American winger contributed 9 scoring chances for with 3 high-danger chances in the mix while yielding 6 SCA and 2 HDCA. Not awful, all things considered. Another shoutout to Ethan Bear, who came second with a 62.66 xGF%, finishing with an identical 0.79 xGF with Boeser.
GSAx: It’s absurd that in less than one period, Thatcher Demko faced nearly the same xGA that Spencer Martin would deal with for the entire rest of the game. Starting with Demko, in his 18:55 between the pipes, the netminder dealt with an xGA of 1.85, meaning that his 3 GA gave him a -1.15 GSAx before he got hurt. Again, these numbers don’t paint him in a favourable light, but Demko was much of the reason why the game was scoreless for so long. Not a single goal that got by him was anything less than a high-danger shot. As for Martin, he gave up 2 goals on a 1.97 xGA, which gives him a -0.03 GSAx to wrap up the game. Not bad by any means, with his goals being high-danger chances as well. Martin also benefitted from the Canucks in front of him actually playing some hockey from time to time.

What to do with Conor Garland?: Last season, Conor Garland was the darling of much of the analytics community. He was considered to be one of the Canucks’ most efficient contracts and the most valuable thanks to good advanced metrics. That was last season though, where his production was okay to go with. This season, not only is Garland currently being out-produced by Dylan Guenther, but his analytics have also fallen off a cliff. At 5v5 play, where he was so good last year, Garland posted a team-low 33.33 CF% against the Panthers, on ice for 2 goals against, posting a 36.15 xGF% and giving up 8 scoring chances while only creating 4 of his own.
It’s a microcosm of his season thus far, where nothing Garland had done has seemed effective. As well, whichever line that Garland was shuffled to last night saw a decrease in CF% share, which is at odds with his puck possession abilities from last season. Perhaps some time in the press box could help him mentally reset from this slump.
Stillman still struggles: Really don’t know how Riley Stillman gets as much rope as he does. He was by far the Canucks’ worst defenceman last night, giving up a 38.71 CF% share while leading the team in xGA (1.17) at 5v5 play. There really doesn’t seem to be any redeeming qualities to him – he’s not producing any offence (0 HDCF, 1 SCF) while being porous on defence (4 HDCA, 10 SCA). Stillman was destroyed by the likes of a fossilized Eric Staal and a washed-up Patric Hörnqvist. It truly feels that there isn’t anything that he can do that Kyle Burroughs can’t do better.
Where Höglander continues to make room for himself: It’s interesting to note that Nils Höglander was the better winger alongside Miller and Horvat against the Panthers. Yes, to start the game, Boeser drew in – but that line only spent 4:40 together barely breaking even against Florida. When Höglander returned to the unit that he spent the last three games with, they all saw a marked improvement in results. Höglander-Horvat-Miller led the Canucks in CF% (80.00), xGF% (66.52), and SCF (5). It is crazy to think that Boeser wouldn’t be able to produce the same results as Höglander, but with how wild this season has been for Vancouver, nothing should be surprising anymore. The jury is still out on whether or not Höglander is a long-term solution, but the results are definitely not bad so far.

CF% – 50.44% HDCF% – 28.00% xGF% – 35.56%
Sure, the Canucks were tired. 4 games in 6 days are tough no matter the team. But, the effort they turned in against the Panthers was not good at all, and they very much so deserved to lose. Vancouver continues to bleed chances, do not get enough of their own, and are inefficient with their opportunities. It’s a losing mentality that has permeated this team, falling back into old habits as soon as the ball isn’t rolling.
Vancouver faces off against the Arizona Coyotes tomorrow at home in the battle for Bedard.
Stats provided by naturalstattrick.com
Editorials
Recent articles from Michael Liu