The Statsies: Second period pushback drives the Canucks past the Avalanche By Michael Liu
24 days ago
Be sure to check out NHL betting odds site Betway for the latest Canucks game day odds!
That was a fun game to watch.
The Vancouver Canucks, on a day where Canada claimed the World Junior Championship again, came out ahead of the Colorado Avalanche in a 4-2 win. It didn’t look that way at first, but instead of folding for once, the Canucks managed to get themselves back into the game after facing adversity. Granted, this Colorado team is riddled with injuries — but a win is a win, and with this team, that’s pretty good.
Here’s the win by the numbers.
As always, you can find our glossary guide of advanced stats here.

The game flow shouldn’t be much of a surprise. After starting the game off decently, it felt as if the Canucks got a little shell-shocked by the Avs’ opening goal on the power play. Until about halfway through the second, Vancouver was out of sync, unable to find their rhythm. Colorado held a 60.42 CF% share to go with a first period total of 2.09 xGF, out chancing the Canucks 18-10 during that span. It looked like it too — the team came out flat and were made to pay for it.
But in the span of three minutes in the second, the narrative completely flipped on its head. Thanks to two goals from Andrei Kuzmenko, the Canucks found the spark that they needed to turn the flow of the game in their favour. By the end of the second, Vancouver dominated puck possession (65.12 CF%) while demolishing the Avalanche in scoring chances (20-6, 13-2 high danger chances). In fact, the Canucks racked up an astounding 2.49 xGF in the middle frame alone, erasing the deficit they put themselves in during the first period. Though Colorado kicked up their efforts in the third, Vancouver happily gave them the puck possession in favour of continuing to out chance the Avalanche, a 1.97-0.95 xGF advantage helping see this game out. 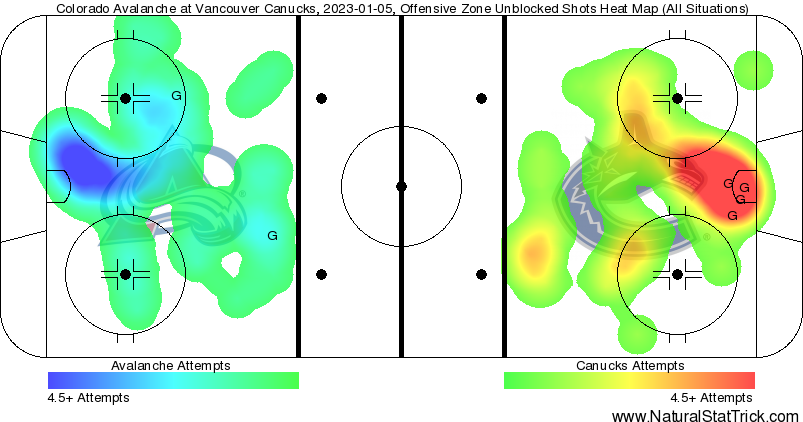 The heat map from last night’s game looks better than previous ones. For starters, the Canucks actually managed to generate a big hot patch in front of the opponent’s goal, one that not only was larger but also dense. It shows that Vancouver was able to crash the net, getting chances where they wanted to instead of being forced to the perimeter. On the flip side, though they did concede another dense spot in front of their own net, Colorado was mostly kept to the outside, their chances limited. It also helped matters that Colin Delia was near unbeatable from high-danger areas.
But while this is all great, something that should be pointed out is that nearly all of these chances for both teams came on the power play. When looking at the 5v5 heat maps, Colorado and Vancouver’s hot spots literally vanish. If anything, the Avalanche hold a slight sliver of chances from the slot area, suggesting that even in a win, the Canucks were a little outmatched at even-strength play. 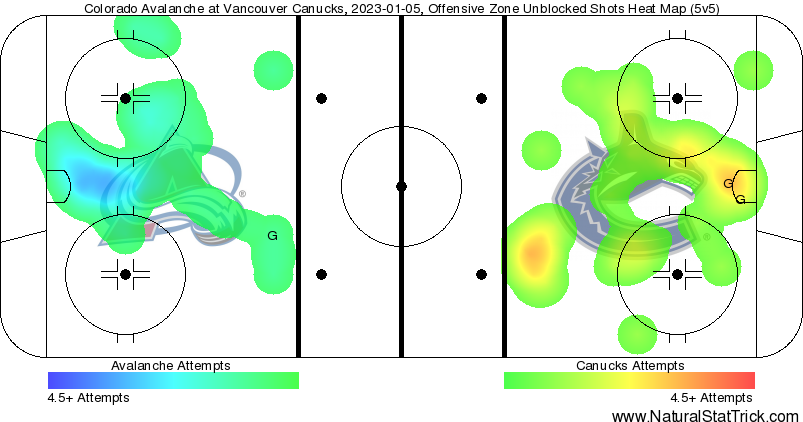 Corsi Champ: Brock Boeser had himself a solid game last night. With a 70.27 CF%, the winger finished first among all Canucks, registering a 24.10 CF% rel to the team average. Boeser’s season hasn’t been going to plan thus far, but with performances like these it’s likely he’ll be able to find a groove. Along with the goal that he scored, Boeser contributed to a total of 19 shots for when he was on ice, allowing 5 against. He looked more active last night as well, driving hard to the net when he got the chance. What also helped Boeser’s numbers was the slightly skewed deployment that he got, with 90% of his shifts starting in the offensive zone, and 75% of his faceoff starts coming in the offensive zone.
Corsi Chump: This doesn’t reflect the kind of game that he had, but Will Lockwood finished with an absurdly low 9.09 CF% against the Avalanche, a -40.08 CF% rel to his team’s average. He wasn’t exactly a liability, giving up 6 scoring chances with one of them being high-danger. What does Lockwood’s numbers in is the fact that he barely generated anything offensively, with a single shot for during his 9:39 TOI. This essentially skews his possession numbers to the negative side, though realistically if a fourth-liner is giving up 0.35 xGA over the course of a game, you take that and run. Lockwood also recorded 8 hits last night, leading his team.
It’s also worth mentioning that Lockwood recording a record-high DAWG rating last night, as stated in The Stanchies.

xGF: It should make sense that Brock Boeser also walks away with the xGF title in this matchup, a 81.24 xGF% topping the charts against the Avs. His percentages get a boost not only from the 2.11 xGF he recorded, but an excellent 0.49 xGA defensively that makes all the difference. Boeser is credited with 9 HDCF, merely 2 HDCA the other way. Two shoutouts come in this category too, firstly to the second-place finisher in Bo Horvat who finished with a 80.77 xGF%. His 3.05 xGF was slightly outweighed by the 1.59 xGA that he finished with, but playing as a centre usually results in picking up more defensive responsibilities and as such would explain the difference to his linemate. As well, it was JT Miller that led the way in raw xGF, posting a 3.19 xGF while in a matchup role. Not bad, all things considered.
GSAx: Collin Delia is Spencer Martin-ing Spencer Martin. Against the Avalanche, Delia was excellent, with the only shots getting past him a function of screens and deflections. Colorado finished the game with a 3.45 xGF, and with only 2 goals against, Delia’s GSAx works out to a 1.45. Technically speaking, both goals he gave up came from low-danger areas, but the perfection that he showed in high and middle danger chances were what made the difference. Delia’s game saving stop late in the third stands out as a moment that summed up his performance.

Shutdown results: It’s probably surprising that I haven’t mentioned Andrei Kuzmenko’s name in this one yet, but there’s a good reason for it. Kuzmenko-Pettersson-Miller drew matchup duties against the Lehkonen-MacKinnon-Rantanen line, which depressed their numbers significantly. In fact, Kuzmenko’s CF% jumped from 30.00 to 60.00 in the time away from them. What stands out is that in this matchup role, Kuzmenko-Pettersson-Miller yielded only 3 high-danger chances against in about 7 minutes of 5v5 ice time, an impressive feat considering the quality of their opponents. Pettersson still finished second on the team in CF% at 5v5 play (56.00) even while shutting his opponents down defensively. Kuzmenko lagged a bit behind his linemate in this regard (40.00 CF%) but was ruthlessly efficient with his 2 HDCF. Miller was surprisingly decent, though his CF% of 41.94 shows what a big difference Pettersson makes playing as the pivot. Most of Miller’s xGF came on the man advantage, as he only recorded 0.76 at 5v5 play.
An interesting name in the shutdown mix: While Kuzmenko-Pettersson-Miller did draw major matchup duties, another name that played heavy minutes against the Avs’ top line was… Curtis Lazar? That’s right, Lazar actually played more against MacKinnon than even Pettersson, albeit by a couple of seconds. What’s interesting is that Lazar posted decent results even despite the perceived mismatch.
It seems as if Bruce Boudreau had his top line against top line, and shuttled the fourth line to fill in the gaps. Lazar’s numbers show that the Lehkonen-MacKinnon-Rantanen only recorded 2 HDCA with him on the ice, a 0.24 xGA in 7:16 TOI. Really, that’s an astounding defensive effort, one that’s probably going under the radar. His wingers in Dakota Joshua and Jack Studnicka actually posted even or better Corsi against the Colorado top line while also holding them to 0.12 xGA, further suggesting the defensive impacts that the fourth line had as a secondary matchup. The slight discrepancy in xGA can probably be attributed to Lazar’s positioning defensively, a lot more of the ice to cover in higher-danger areas.

CF% – 45.80% HDCF% – 65.71% xGF% – 60.66%
Though this game started out poorly, the Canucks managed to find some battle within them to come back and win. It’s a show of resiliency that has been few and far between for this team, and one that shows what Vancouver could achieve. Granted again, the Avs were icing a very top-heavy lineup with depth decimated by injuries, but that shouldn’t take away from a good effort by this Canucks team. Now, this all being said, a win like this should not deceive management into thinking that this team is ready to compete for the postseason.
Next up, the Canucks will take on the Winnipeg Jets on Sunday in another visit to the Canada Life Centre.
Stats provided by naturalstattrick.com
Editorials
Recent articles from Michael Liu