The Statsies: Elias Pettersson in a shutdown role helps Canucks ride out the Avalanche By Michael Liu
2 months ago
Welcome to The Statsies, brought to you by NHL lines site Betway!
When you pull off a win against the defending Stanley Cup champs (even if they are a bit banged up) on the road, it’s a pretty good night.
The Canucks got the job done on the road, coming back from a third-period deficit and managing to hang on to defeat the Colorado Avalanche 4-3 at Ball Arena. It wasn’t a pretty game at times, but overall a quietly solid game from Vancouver to see this one through. There’s plenty to like about the effort given over the entire 60 minutes, and there was even a sugar-coated ending to it all.
Here’s what the numbers had to say about the victory.
As always, you can find our glossary guide of advanced stats here.

I think the striking thing here is the massive mountain the Avalanche built in the second period. Obviously, the 5-on-3 power play definitely helps inflate their puck possession and xG numbers, with a ridiculous amount of chances coming from the double minor overlapping with another infraction. Credit to the Canucks for riding it out and then battling back in both departments.
Colorado finished the first period with a 70.59 CF% share, which probably would’ve set the tone for how the game was going to go back in October. However, this Canucks team didn’t yield in the face of that onslaught. What’s impressive was how they came out in the second and third periods, making the necessary adjustments to limit the Avalanche’s chances. In fact, at 5v5 over the last two periods, the Canucks (0.71 xGF) were able to outplay the Avs (0.52 xGF), which isn’t an easy feat at all. 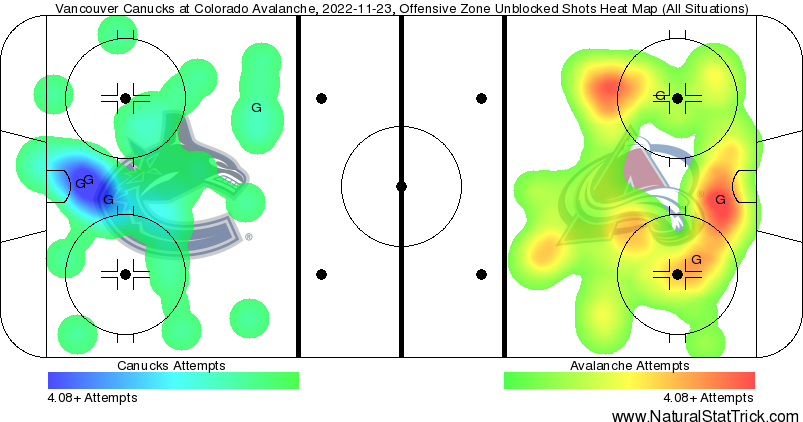 Another clue as to the Canucks bending but not breaking comes from this heat map. Colorado got a bunch of shots last night — but most of them didn’t come from in tight against Spencer Martin. Rather, there was a spread of green all over the offensive zone, with a couple of red patches here and there. This is an indication that Vancouver was able to defend the way they wanted to against a very high-powered offensive team.
It does get better than this too. When looking at the 5v5 heat map, all of the red patches disappear for Colorado, while Vancouver retains their own hot spot right in the slot and in tight. What this suggests is that even without the man advantage, the Canucks were able to generate high-danger opportunities. On top of that, the Avs only broke down Vancouver’s defensive structure when they were on special teams. That shouldn’t be taken lightly, especially against stern competition in a game that the Canucks were trailing in. It also is a much more repeatable formula than getting low-percentage goals. 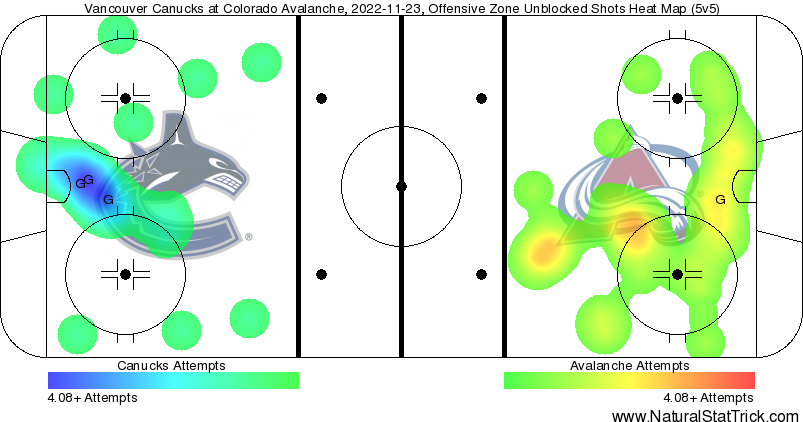 Corsi Champ: Andrei Kuzmenko topped the charts again last night, rocking 66.67 CF% in 15:43 TOI. He was comfortably ahead of second-place JT Miller while also posting good defensive metrics. Kuzmenko finished fourth in xGA (0.36), just shy of the team lead of 0.2. The Russian winger has seemed to find his groove again after being healthy scratched, and the Canucks are all the better for it with him clicking alongside Pettersson and Mikheyev.
Corsi Chump: This was probably a long time coming, but Kyle Burroughs puts up a stinker for his worst game in Canucks colours. The defender finished rock bottom in CF% (14.81), yielding 23 Corsi against during his 15:04 time on ice. One of the players that recorded the most ice time and CA against Burroughs was Nathan Mackinnon, with 11 CA during 6:13 against Burroughs. That’s excusable against the highest-paid player in the NHL, but another player that caved Burroughs in was Alex Newhook (13 CA in 6:21). Burroughs actually got benched for a period of time in the third period, with Bruce Boudreau opting to roll five defencemen to close out the game.

xGF: Who else but Andrei Kuzmenko to take this one home as well? The Kuzmenkshow rolls on, collecting the xGF title with his 67.83 xGF%. Of course, aside from his xGA numbers, Kuzmenko posted a 0.76 xGF to come 5th on the team in a balanced two-way effort. Quinn Hughes led the Canucks in raw xGF (1.11), but also came up with an xGA of 0.97 to drag his xGF% ratio down a little. But, give Hughes a little credit – he put up positive xGF% and CF% numbers while playing against Colorado’s top line and top defensive pairs. Against Devon Toews and Cale Makar, Hughes logged 15:46 and 15:31 TOI respectively, finishing with a total of 29 CF and 23 CA against possibly the most complete defence pairing in the NHL.
GSAx: Spencer Martin did his job last night. The Canucks backup turned in yet another strong performance, moving to 5-1-1 on the season as a continued surprise that keeps giving. The Avalanche recorded an xGF on 3.02, thus meaning Martin finishes the game with a 0.02 GSAx. It’s marginal, but this is what you want your backup to do. He kept Vancouver in the game and wasn’t a liability by any stretch of the imagination.

Elias Pettersson, shutdown centre: It’s been amazing to see Pettersson’s defensive game take another step up this season. While he was by no means a defensive liability in his earlier seasons, the Swede now looks to be more aware in his own zone, disrupting plays and getting ahead of them with his hockey IQ. Pettersson was thrust into a big defensive role last night, playing hard minutes against the Lehkonen-Mackinnon-Rantanen line, a matchup that Bo Horvat historically took. This is a big reason why his Corsi numbers are depressed this game (45.45 CF%), but Pettersson made life tough for Colorado’s top unit.
Pettersson gave up the CF% and xGF% share to the Avs while they were on ice, with a total of 9 scoring chances against and 4 high-danger chances against. This doesn’t sound too impressive, but his defensive impact is immediately noticed when Mackinnon played without Pettersson on the ice. Number 29 on the Avs saw his CF% jump from 67.86 to 71.43, and his xGF% go from 71.01 to 80.72 when Pettersson wasn’t lined up across from him.
It’s a noticeable difference, and eating up 11:28 of Mackinnon’s 25:55 TOI is a big chunk of possible offence that he can generate. Pettersson is finally being put into situations where his defensive prowess can be honed and sharpened, and it’s hard not to be excited about the improvements that he’s shown with the trust that he’s been given. The other benefit is that players like Horvat and Miller can be freed up to play against relatively weaker lines, thus resulting in a bigger net impact offensively than just shutting the opposing big guns down.
Rolling 5: Taking the Burroughs anomaly game aside, the Canucks managed to keep 5 defencemen at consistent deployment during 5v5 play. Ethan Bear played the most of any Canuck defencemen with 15:30 TOI, and Luke Schenn played the least with 13:24 TOI. That 2-minute gap is honestly great to see and could’ve been a big reason why Vancouver saw as much success as they did at even strength. The more evenly the minutes are distributed on the back end, the less likely fatigue is going to set in, and the less likely mistakes are going to happen because of exhaustion. This also gives the opportunity to ride some defencemen harder during special teams. Schenn recorded 3:46 on the PK, the most of any Canucks, while Bear was a close second in 3:31. Keeping their defenders fresh will be a big key in helping Vancouver win games, especially with defensive depth being an issue.
Finding Nils a home: Nils Höglander is not a bottom 6 player. Sure, his puck possession and protection abilities lend well to the forechecking style the Canucks want to play, but Höglander did not look like he should’ve been deployed as such. In this game, he lined up alongside Miller and Horvat to much better results. Their line led Vancouver in CF% (53.85) and put up an astronomical 94.76 xGF% thanks to a minuscule 0.02 xGA. It shouldn’t come as a surprise that the Höglander-Horvat-Miller line saw the most ice time (10:12), which is another byproduct of this unit being freed up from defensive matchup duties. With the likes of Tanner Pearson being out for an extended period of time, it would be nice to see this line together for a little bit longer, to see if this is a long-term solution as a combination.

CF% – 38.10% HDCF% – 50.00% xGF% – 38.94%
Thanks to a strong effort at 5v5 play and individual performances, the Canucks were able to outlast a tough Avalanche team to record a comeback win, one that they’ve been on the wrong side of too many times this season. There’s plenty to like about how this team competed and played on the road. Though there are still points of concern, it’s a rare 60-minute effort that Vancouver can look back on and say that they competed every second along the way.
The Canucks get a bit of a rest on the road, before heading into Vegas to take on the Golden Knights Saturday.
Stats provided by naturalstattrick.com
Editorials
Recent articles from Michael Liu