The Statsies: A lackadaisical effort from the Canucks in a loss to the Jets, by the numbers 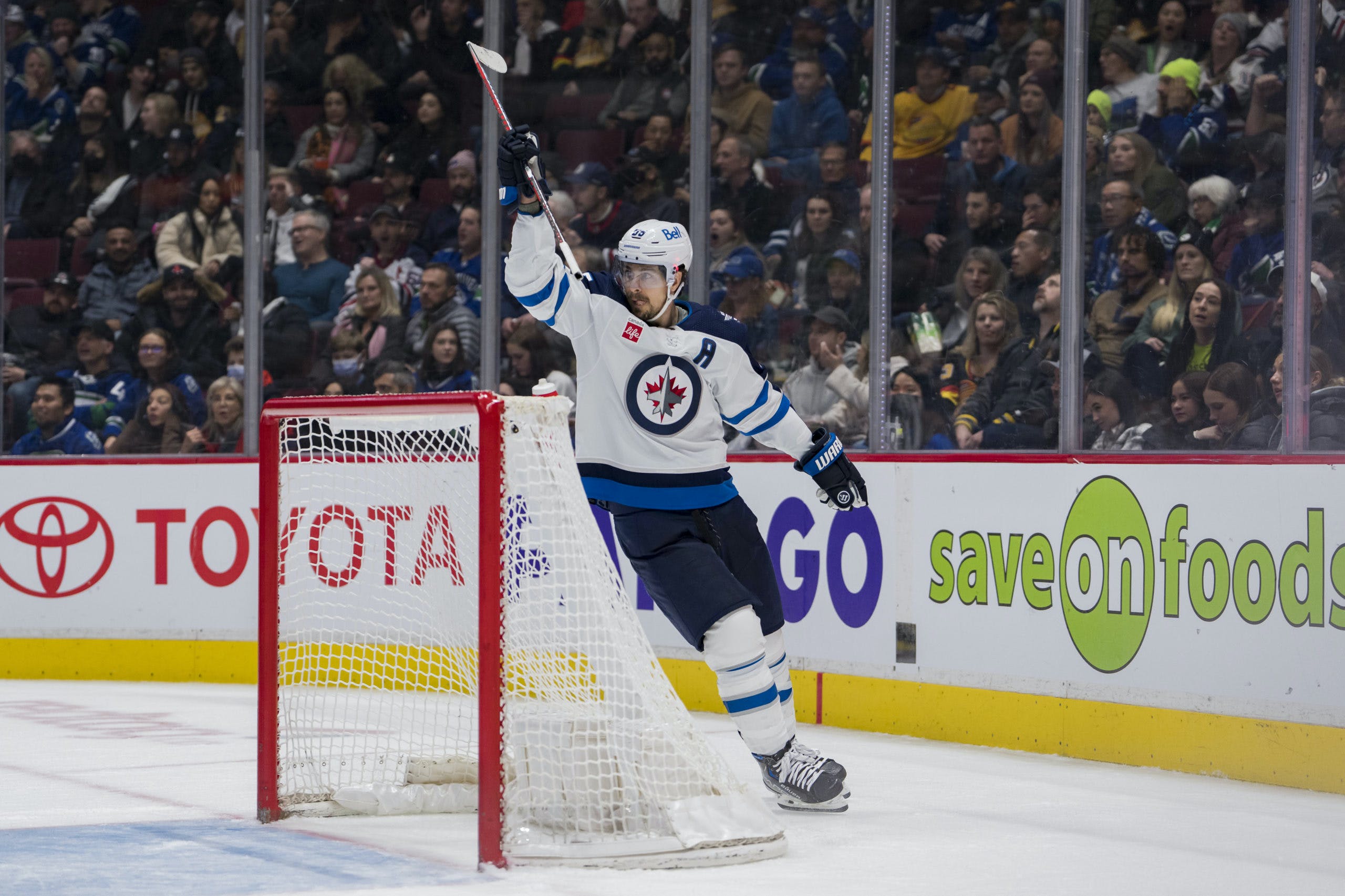 By Michael Liu
1 month ago
Be sure to check out NHL betting odds site Betway for the latest Canucks game day odds!
Two jersey tosses in one season might just be a record for this franchise.
The Vancouver Canucks returned home and got shellacked by the Winnipeg Jets, losing 5-1 with an uninspired effort. Sure, they might not have done anything that lost them the game. But, by the same token, they didn’t do anything to win it either. Vancouver showed up physically, and that’s all that could really be said of them.
Here’s the loss, by the numbers.
As always, you can find our glossary guide of advanced stats here.

The expected goals and puck possession flow chart shows that this game wasn’t entirely a one-sided affair. Winnipeg did have the advantage throughout the entire game, but Vancouver wasn’t entirely out of it either. In fact, the Canucks managed to hold the CF% share through the first and third periods, while also posting a 48.39 CF% in the second. In all, it wasn’t awful when it came to puck possession.
It’s also the same story when looking at the scoring chances. The Canucks finished the game with a 24-20 advantage in that category, with a 6-4 lead in high-danger chances. Interestingly enough though, Vancouver ended up with an xGF of 1.86, losing to Winnipeg’s… 1.87? Yup, this game statistically was very much evenly-matched, with either team with a chance to win it. Which is why it can be said that while Vancouver didn’t do anything to lose this game, they also didn’t do anything to shift the balance in their favour to win it. 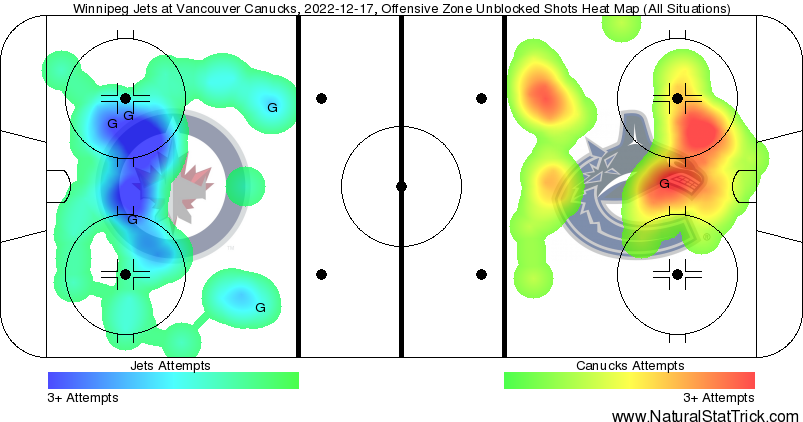 A lot of this tepidness could be explained by this heat map. As is the custom at this point, the Canucks gave up a lot of high-danger opportunities from the slot, while not getting a good concentration of opportunities of their own. It’s a familiar pattern to most Canuck fans at this point, and one has to wonder what the team is trying to achieve by not adjusting their play. It could be that the Jets were particularly effective at forcing Vancouver to the perimeter, but it’s a trend that can’t be ignored.
To add further concern, Vancouver didn’t generate much of anything at 5v5 play. As soon as the filter is toggled, their entire hot spot disappears, while Winnipeg’s remains virtually untouched. It represents another regression of their play that’s not doing them any favours in winning hockey games. In previous matchups, their even-strength play was showing signs of life, but falling back to old habits against the Jets, in a game where most of the time was spent at 5v5 play, is a death sentence.

Corsi Champ: This game’s champ is Bo Horvat, who finished last night with a 64.52 CF%. The captain contributed the only goal of the game for the Canucks, and generally looked like the only one who was trying in the offensive zone. All that being said though, Horvat was on ice for two goals against, which aren’t reflected in his xGA due to how low danger those shots were. It could be chalked up to luck, but Horvat also hasn’t been dynamite in his own end. There were a few moments that looked lazy, including a poor line change that got Ilya Mikheyev burned for a goal. Hopefully, for Horvat and the team, this will change.
Corsi Chump: I get it, with both Elias Pettersson and Brock Boeser out with injury, new lines have to be a thing. But as soon as Nils Höglander was looking like he was turning the corner, a new line combination sent his CF% plummeting to the bottom of the team. Höglander finished last night with a 38.89 CF%, in a game where he also saw the ice the least (11:36 TOI). Not a whole lot went right for the Swede, who unfortunately went from being one of the best players against Calgary to one of the worst against Winnipeg. Höglander was splitting time between a combination of Lane Pederson-Curtis Lazar and Pederson-Sheldon Dries.

xGF: Probably isn’t a surprise either, but Horvat collects the xGF award with a 70.83 xGF%. His 0.83 xGF was the second-highest on the team while posting a team-low 0.34 xGA. Horvat was on the ice for 12 scoring chances for and 4 changes against, with none of the chances against being high-danger. That said, out of those four chances the Jets got, two of them resulted in goals. The results are what matters, and unfortunately for Horvat who’s metrics looked fine, he still didn’t do himself much favours with how this game ended up.
GSAx: Oof. That’s a game that Spencer Martin will want to have back. With Winnipeg only posting an xGF of 1.87, that means that the 5 goals Martin gave up puts his GSAx on the night as a -3.13, effectively costing Vancouver three goals with his play. While not all blame should be rested on his shoulders, Martin does bear the brunt of letting in some pretty brutal shots. Not a single goal game off a high-danger opportunity, with three categorized as middle danger, and two as low danger. Overall, this is a game to forget.

Putting the blender to work: As mentioned previously, with Pettersson and Boeser out, Boudreau was tasked with finding the best lines to create a stopgap as they recovered from illness. Seven different combinations were tried out against the Jets, probably as a way to try and get something going. A couple did stand out, with Miller-Horvat-Garland being metrically the best line (57.14 CF%, 65.68 xGF%). They also happened to give up a goal, which was par for the course honestly. Interestingly enough, the Jack Studnicka – Nils Åman – Dakota Joshua matched the Horvat line in CF%, with similar metrics across the line except for a lower xGF%. The worst of the units was Höglander-Pederson-Dries, who in their 4:42 together legitimately put up zeros across the board. They contributed more to the Jets offensively than the Canucks when on ice.
Tyler Myers redemption arc: Okay, I’m exaggerating, but Tyler Myers did have himself a decent game with the tire fire burning all around him. After taking the penalty that gave the Jets the first goal of the game, Myers was solid all the way through last night. He finished with a 61.11 CF%, good enough for second on the team and leading all defencemen. Myers was only on the ice for one goal against, while managed to record the best xGF of any Canucks (0.89). It shouldn’t really be something to celebrate for a top 4 fixture like Myers, but in a game like that, fans should take what they could get.

CF% – 53.41% HDCF% – 60.00% xGF% – 49.87%
It was a tepid effort at best, and a lazy one at worst. This was a game that the Vancouver Canucks had a 50/50 chance to win statistically, and instead got thumped 5-1 in front of a home crowd. Much of the same glaring issues throughout the season were on full display last night, and the team still looks very resistant to change. Unfortunately, with how management spoke, this might just become par for the course from now on.
Vancouver will be back in action at home, facing off against the St. Louis Blues on Monday.
Stats provided by naturalstattrick.com
Editorials
Recent articles from Michael Liu