The Statsies: How the shortest line in hockey propelled the Canucks to a win over the Flames By Michael Liu
1 month ago
Be sure to check out NHL betting odds site Betway for the latest Canucks game day odds!
Dan Vladar might’ve been the star of the show last night.
After a bit of a break, the Vancouver Canucks returned to action against the Calgary Flames, scooping up two points in a 4-3 shootout win at the Saddledome. They blew another two-goal lead, yes, but credit is due for managing to battle back and getting the results. Things weren’t all sunshine and roses though, with more than a couple of clouds hanging over this team.
Here’s the shootout win, by the numbers.
As always, you can find our glossary guide of advanced stats here.

Vancouver started on time this game, getting their two-goal lead with some rapid-fire action early in the first. Unfortunately, that also happened to be the only time that this team controlled the flow of the game significantly. Calgary shifted the tides in their favour off of the power play that got them their first goal, and built off of it from there. The Flames would dominate the Canucks in puck possession, peaking in the third period with a CF% share of 60.71. They also managed a 3.77 xGF through regulation and overtime, which is in comparison to the Canucks’ 2.86.
If there is one silver lining to take away from this game flow, it’s that Vancouver was surprisingly effective at suppressing high-danger chances. Yes, it could be said that Calgary was unfortunate not to score 0.77 more goals, but credit the Canucks for not making that easy. Both teams recorded 11 HDCF in the first period, but despite their puck possession advantage, the Flames managed only 8 HDCF through the rest of the game. In that same span, the Canucks tallied 7. 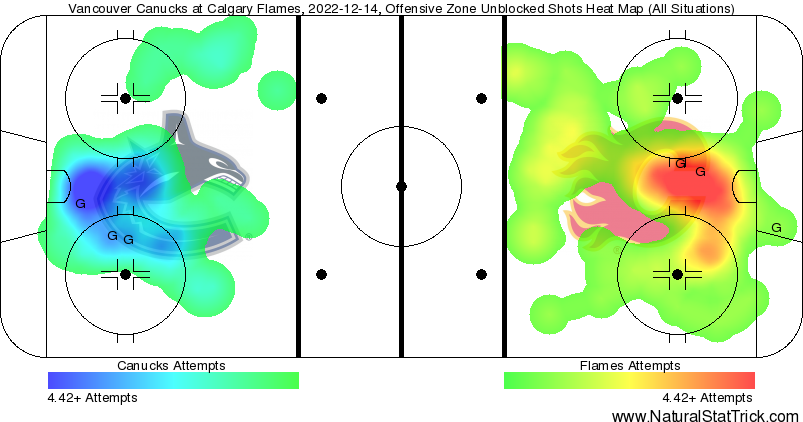 This isn’t an awful heat map to be looking at. Both teams got approximately the same concentration of high-danger chances, with the Flames having a wider spread of shots as a factor of more attempts. Even despite this, it should be an encouraging sign to see this Canucks team mitigate those chances in front of their net, with how much they’ve struggled this season to do so. Hopefully this becomes a trend, instead of an anomaly.
As an interesting reversal to the usual trend, the Canucks were actually the better team at 5v5 play. All three of their goals came at even strength, and just from looking at the heat map, they essentially eliminated Calgary’s hot spot while retaining their own. It’s not something that can be usually said about this team, and Vancouver needs their 5v5 play to be solid in order to keep on winning. Games like this show that it isn’t out of the realm of possibility.

Corsi Champ: The preseason favourite for this crown is making a charge. Conor Garland led all Canucks last night with a CF% of 64.10. This shouldn’t be a surprise, for reasons which will be discussed later, but Garland has been slowly turning it around. Against the Flames, the diminutive winger outchanced them 9-4 when he was on the ice, recording 4 HDCF to boot. Garland was not only able to keep possession of the puck well, but also make good use of it, something that he hasn’t done enough so far this season.
Corsi Chump: Curtis Lazar found himself out against the Flames’ first line throughout this game, and got absolutely kicked in as a result. He earns this chump title with a team-low 33.33 CF%. That being said, it’s entirely reasonable to expect this sort of result in a matchup against the top-6 of an opposing team. All that being said though, Lazar managed to do his job decently well, holding Calgary to only three HDCA out of the seven scoring chances they had against him.
Someone to note in this category though would be Bo Horvat. Though the headlines surrounding him right now are about his contract negotiations and a potential trade, Horvat’s play on the ice should remain the main focus. Against the Flames, even despite the goal, he posted the second lowest CF% (36.17), but compounded it with an xGA of 2.17, the highest of any Vancouver player. Horvat gave up 16 scoring chances against, 7 of them considered as high danger. It’s worth noting that the entire “top 6” of the Canucks struggled against Calgary.

xGF: Nils Höglander just had his best game of the season. His struggles have been well publicized to date, playing mostly in the bottom-6 and getting shunted around with not a lot to show for it. It’s changed as of late, with Höglander playing alongside Horvat and Miller, and then to this game. In a makeshift third line with Sheldon Dries and Garland, Höglander put up a team-best 75.31 xGF%, buoyed in large part due to a team-low xGA of 0.24. The defensive prowess of this line, coupled with the two goals that they produced made Höglander a big part of the reason why the Canucks managed to win this game.
GSAx: This was a solid performance by Spencer Martin. With the Flames racking up an 3.77 xGF on 38 shots, Martin turned aside 35 of them to record a 0.77 GSAx. It wasn’t a spectacular performance, but a rock-steady one that Vancouver definitely needed. Two of the goals Martin gave up were high-danger, with one goal being middle danger. Of course, that wouldn’t be the major focus in this result, with Martin stopping all three Calgary shooters in the shootout. All around, a good outing by the netminder.

Höglander-Dries-Garland, by the numbers: With the top six underperforming, Vancouver’s third line stepped up in a big way against Calgary. By all metrics, Höglander-Dries-Garland did very well for themselves, leading the Canucks in CF% (61.11), xGF% (88.39), SCF% (100.00), and HDCF% (100.00). It wasn’t as if they were getting many favourable matchups either, iced against Nazem Kadri’s line the most during the game. This line is a mish-mash of players that hadn’t seen too much success three months into the season, but came together in a big way to help the Canucks get the two points. It’s worth seeing if they can recreate their magic against other opponents.
Saint Petersburg looking cold: On the total flipside, the Andrei Kuzmenko-Elias Pettersson-Ilya Mikheyev line was absolutely ice cold against Calgary. They finished as the worst Canucks line statistically at 5v5, combining to only produce an xGF of 0.01 while conceding 0.37 xGA. It’s a huge 180 from that stretch where they were one of the most productive lines in the NHL, and a lot of their characteristically good stats were completely missing. This unit only managed a 22.22 CF% share in 7:13 TOI together, yielding four scoring chances against with three being high-danger. It stands out as an anomaly in what otherwise has been a bright spot in Vancouver’s season.
The Myers-Burroughs experiment: During practice before the game against Calgary, Boudreau unveiled a new combination on the back end: Tyler Myers and Kyle Burroughs. It’s been the first time that Bruce has opted to play one of his defencemen on their offside, and… well, it wasn’t great. Myers had a really rough game, the worst defenceman by CF% (37.14), and the worst xGF% of all Canucks (32.42). However, Burroughs was solidly average in the pack. In fact, it looks like Myers was dragging his numbers down, with Burroughs’ CF% jumping from 40.00 to 100.00 playing away from his partner last night. It was definitely worth a try, and further experimentation shouldn’t be out of the question, but this one was a bit of a dud.

CF% – 45.68% HDCF% – 55.00% xGF% – 41.15%
The Canucks came into the Saddledome and managed to scrape out a win against the Flames, despite some classic Vancouveritis striking again. It wasn’t the usual suspects that stepped up, but ones that were definitely needed. Höglander-Dries-Garland were the big story tonight, but a bounce-back from their usual top 6 should be a topic to keep an eye on as the season moves on.
Next up, Vancouver returns home to face off against the Winnipeg Jets on Saturday.
Stats provided by naturalstattrick.com
Editorials
Recent articles from Michael Liu