The Statsies: The Ethan Bear-Quinn Hughes pairing deserves an extended look after Canucks win vs. Oilers 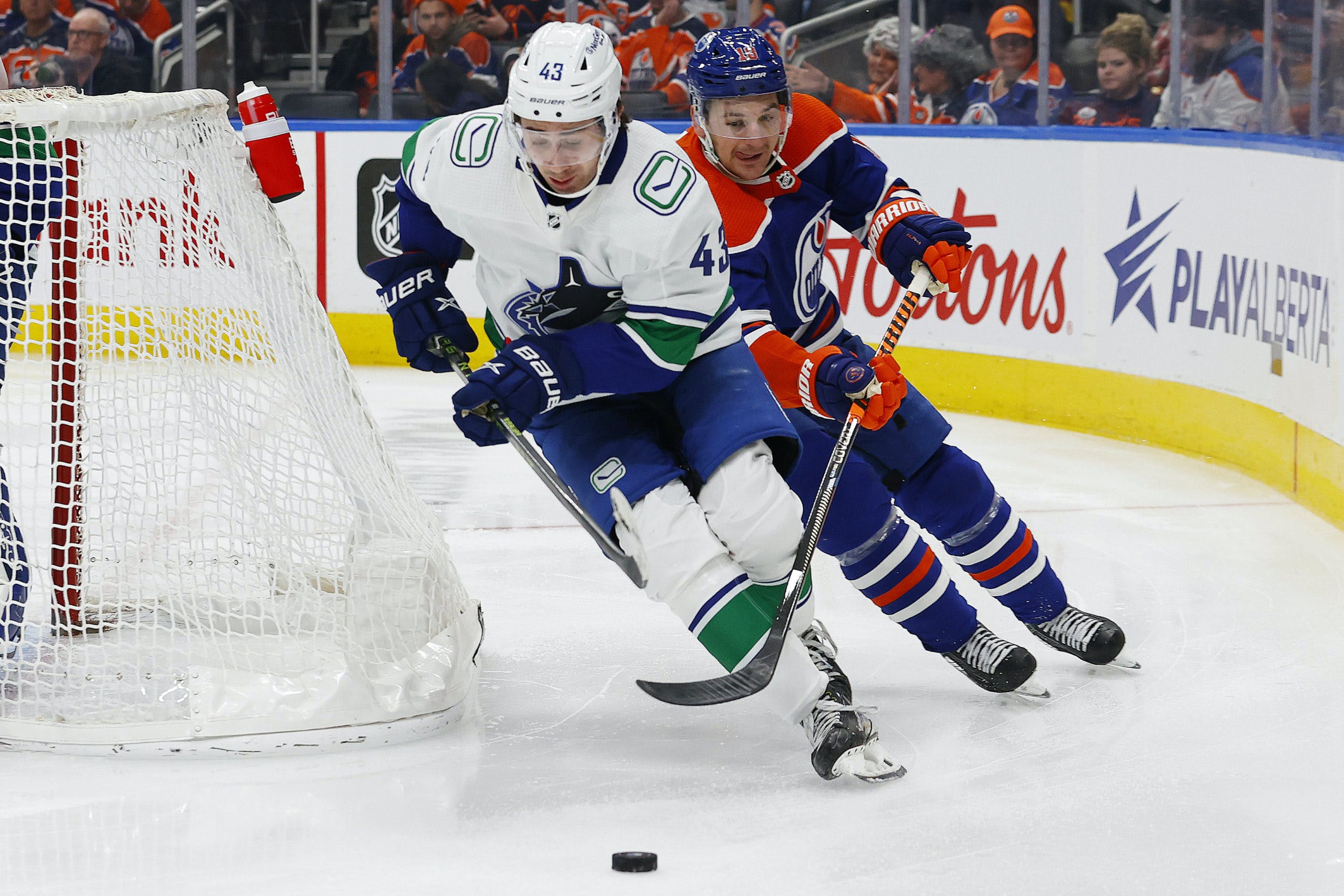 By Michael Liu
1 month ago
Be sure to check out NHL betting odds site Betway for the latest Canucks game day odds!
Okay, that one was pretty good.
After going down 2-0, the Vancouver Canucks stormed back against the Edmonton Oilers, putting up 5 unanswered goals to win 5-2 at Rogers Place. This team showed both sides of the coin, where defensive lapses are common but in tandem with goal-scoring by the bunches. Last night, their offence was able to pull through, building off of excellent work by Collin Delia and their penalty kill.
Here’s the win by the numbers.
As always, you can find our glossary guide of advanced stats here.

It shouldn’t be a surprise to see the Oilers dominating puck possession and the expected goals battle in this one. That sort of thing happens when you have the best hockey player on the planet on your team, as well as a top-10 talent alongside. However, something of note to point out is how effective the Canucks’ penalty kill was last night. This special team is on track to perform at a historically terrible rate, but managed to pull together an impressive performance against the league’s best power play. Not only did Vancouver not concede a single power play goal, but they also limited the amount of momentum the Oilers generated with all the chances that they could possibly ask for.
Another encouraging sign is how well the Canucks played in the third period. It was probably the only period where they controlled the flow of the game, dictating chances with good puck possession and getting the goals that they needed to see the win all the way through. At 5v5, the Canucks finished with a 56.67 CF% while controlling a 79.57 xGF% share. It’s night and day from the usual third period effort with this group. 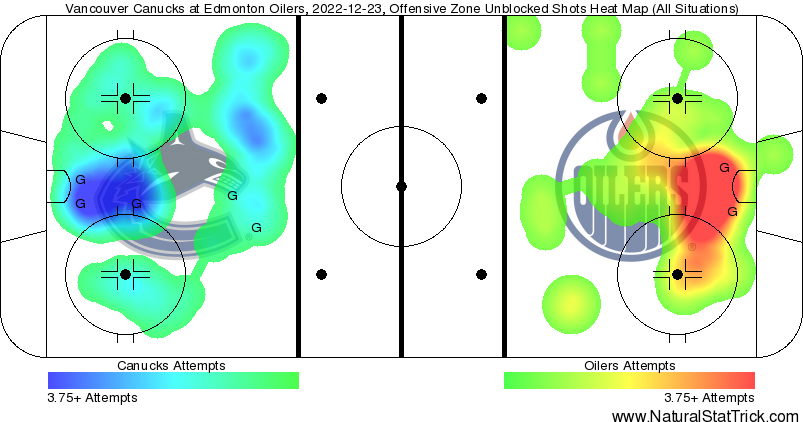 Like the previous matchup, Vancouver’s hot spot comes in large part on the man advantage. It’s not that they were bad at 5v5 play — Edmonton just outplayed them at even strength in the early going, which contributed to the difference seen on the heat map. But, looking as a whole, it’s definitely good that the Canucks were able to outchance the Oilers across all situations, given the disparity between the effectiveness of their special teams.
Speaking of, it’s again interesting to see how Edmonton didn’t track many high-danger opportunities on the man advantage. Though their hot spot does grow when accounting for all situations, it also doesn’t see the same growth relative to Vancouver’s. As well, the shade is lighter for the Oilers, suggesting that they didn’t manage to get a high density of opportunities in optimal areas. Not a bad showing by the penalty kill.

Corsi Champ: Look who we have here. Elias Pettersson might’ve only put up two assists, but he was absolutely dominant when he was on the ice. Pettersson led all Canucks with a 75.00 CF%, recording a staggering 30 CF with only 10 CA. He made good use of his puck possession too, chipping in with a team-leading 17 scoring chances. Pettersson dominated Edmonton’s second line and looks absolutely electric every time he’s on ice, not missing a beat from that performance against the Kraken.
Corsi Chump: Tyler Myers has been having a rough season. That’s not a controversial take, and the stats last night against the Oilers further add fuel to that fire. Myers came dead last amongst Canucks in CF%, his 29.63 putting the defenceman at a -32.34 CF% rel to the rest of the team. This comes even as he was on the ice for three goals for, which puts into context just how rough he had it defensively. Myers surrendered the highest xGA (2.49) and SCA (24) out of all players on Vancouver’s roster.

xGF: Conor Garland gets himself another xGF award, leading Vancouver with a 79.66 xGF%. What’s interesting is that Garland was able to do so with a balance of 4 scoring chances for a 7 scoring chances against, suggesting that the winger was able to overcome this by sheer volume of shots versus the quality of chances. Regardless, it seems that Garland has been able to fit well alongside JT Miller whenever they line up with each other, more often leading to offence when on ice.
A special shoutout goes to the main man in Pettersson, who recorded the second-highest xGF% (76.05) and the highest xGF (2.81). The Swede was unlucky to not find the back of the net tonight with the number of chances he had, 6 of which were high-danger.
GSAx: Colin Delia was the only reason why the Canucks were even in this game after the first period. The backup netminder absolutely stonewalled one of the best offensive teams in the league, staving off offensive assaults and patching up defensive breakdowns to keep the score at 2-0 after the opening frame. Since Edmonton only put 2 goals past him after generating 3.89 xGF, Delia finished last night with a 1.89 GSAx. With both goals coming in as high-danger, there wasn’t much to pick apart about the performance between the pipes.

Even the third Sedin needs a “Burrows”: Okay, maybe I’m getting ahead of myself with that. But, it’s hard to imagine that anyone would’ve thought Lane Pederson would be alongside Elias Pettersson consistently. Along with Andrei Kuzmenko, the line was once again the best combination the Canucks had, leading across CF% (78.95), xGF (0.61), SCF (5) and SCF% (62.50). They didn’t see as much ice time as they did against the Kraken, partially because of the soft match that Bo Horvat and JT Miller shared against Connor McDavid. But, regardless, something has clicked for Pederson in the top six, with Pettersson once again providing the brains for a new combination.
Bogilny strikes: Speaking of the captain, Horvat had himself a big game with two goals and two assists. However, his impact wasn’t just on the offensive side tonight. Though his metrics don’t look too pretty at first glance, it’s important to note that Horvat managed to limit McDavid and Draisaitl to 2 high-danger chances apiece, effectively containing the damage that they are capable of. Bruce Boudreau moved Ilya Mikheyev down the lineup to help in these defensive efforts, and even Brock Boeser chipped in with good play in his own end. Not bad, when you’re only giving up a total of four chances over an entire games’ matchup.
Give me more Huggy Bear: The Ethan Bear + Lane Pederson for a 5th-round pick trade seems to be getting better by the day. Originally just a meme name playing off one of Quinn Hughes’ nicknames, Hughes and Bear got an extended run together at 5v5 play, and were absolutely head and shoulders above every other defensive pairing.
Together for 15:36 TOI, the pairing posted a CF% of 68.18, an xGF of 1.06 while merely conceding 0.14 xGA. Hughes-Bear only gave up 2 scoring chances against, with 1 of them being high danger. The two defencemen complement each other well, with Bear’s puck retrieval abilities and transition play able to mesh with Hughes’ slick skating and offensive instincts. It’s a pairing that probably won’t see much deployment down the line, as the Canucks will try to spread out their puck-moving defencemen through the lineup, but it’s an option that would serve this team well in crunch time.

CF% – 48.00% HDCF% – 35.71% xGF% – 55.14%
The Vancouver Canucks bounced back from a very rough first period, putting together some great hockey and building off performances from Collin Delia and their penalty kill. They managed to scoop up a resounding comeback win against the Oilers on the road in the back half of the back-to-back, not an easy feat by any means. There were plenty of positives to take away from the latter half of this contest, and plenty of room for improvement from the opening frame. Regardless, this team is offering a glimpse into what they are capable of once more.
The Canucks are flying back home for the Christmas break, before getting back into action on Tuesday when the San Jose Sharks roll into town.
Stats provided by naturalstattrick.com
Editorials
Recent articles from Michael Liu