The Statsies: Elias Pettersson continues his strong start to the season 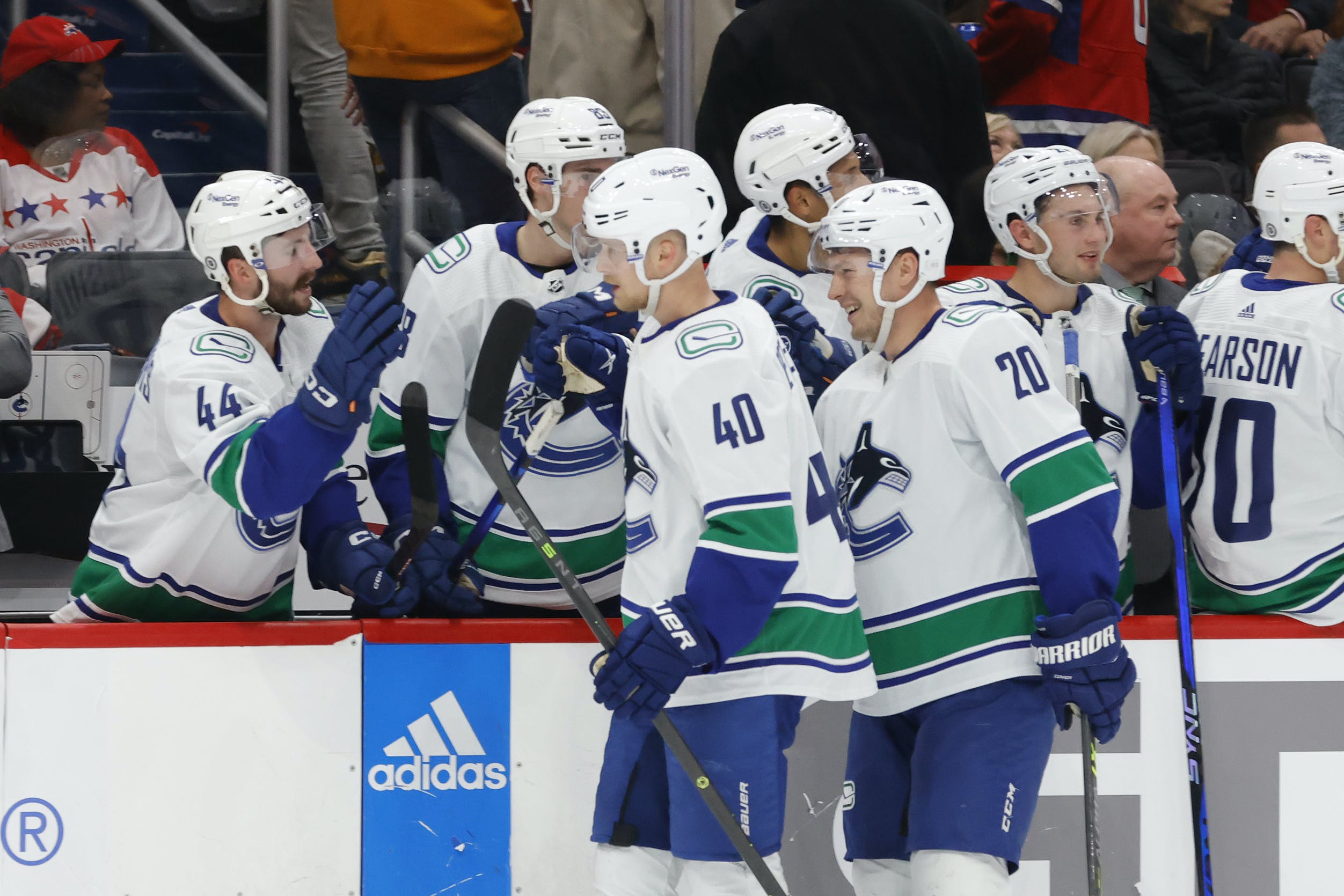 By Michael Liu
1 month ago
The Seattle Mariners have a history of hitting their fans where it hurts, but at least they make the playoffs enough to offset the pain.
Another game, another multi-goal lead surrendered, as the Canucks drop a 6-4 decision against the Capitals in Washington DC. It has not been a good picture painted early in the season, but there are still some positives to take away from this game numbers-wise.
They gotta start winning though.
As always, you can find our glossary guide of advanced stats here.

There are no surprises with how the game flow looks. Vancouver played 40 minutes of solid hockey, including a 10-minute stretch where they took hold of the possession numbers and made it count. It was a back-and-forth contest where both teams got their chances, until that third period. The Canucks lost all their momentum during that break and got caved in on expected goals. Their possession numbers might’ve stayed decent, but that also just means they weren’t able to do anything with the puck. Pretty concerning, especially when you’re conceding 4 unanswered goals in one period. 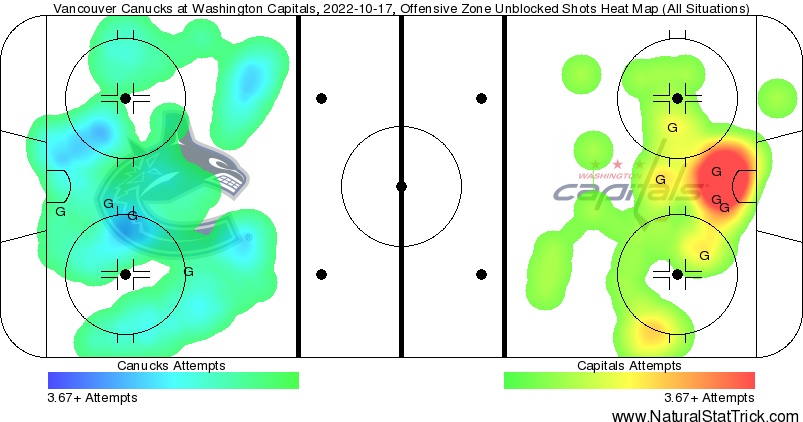 A big point of concern for the Canucks here is the lack of high-danger shots. In games past, they would have their hot patch right in that low slot area. Tonight, there’s no such luck, with a wide spread of shots coming from all over the offensive zone. While that isn’t inherently bad, it also suggests that Vancouver wasn’t able to get enough high-percentage looks in areas where goals usually come from.
On the flip side, Washington lit up the Canucks net front with high-danger shots. Another red bubble surrounds Thatcher Demko’s crease with 3 of the 6 goals coming from that spot. It sucks to see, especially in a game where the Canucks wanted to buck a trend.

Corsi Champ: Elias Pettersson breaks Andrey Kuzmenko’s reign as the Corsi champ with another strong game here. He led his team in CF% (72.73) and his CF% rel (29.87) easily had him as one of the most effective forwards in terms of puck possession. Pettersson also led the team in xGF% rel (40.06), but only managed one high-danger scoring chance out of 11 scoring chances. Still, his strong start is one of the only bright spots thus far in the young season.
Corsi Chumps: I’m awarding this one to two players, because I can’t decide if the 1% difference is enough to offset their impact on the games. Sharing this joint “award” are Tanner Pearson and Brock Boeser, who came in last and second-to-last respectively in CF% (40.00, 41.03). On a Canucks team that had no trouble possessing the puck, the pair ended up with negative CF% rel suggesting that they were chasing the play more than their teammates. As well, Pearson and Boeser shared the most scoring chances conceded by forwards this game (11). Overall, just not good game for both of them.
xGF: Vasily Podkolzin earns this game’s xGF crown with an xGF% of 77.94. The Russian has quietly been having a very solid sophomore season thus far underneath the three losses, showing off top 6 playmaking ability to go with getting into dangerous areas. It’s a matter of time before the points will come for him. Another shout-out goes to Pettersson, who finished second with an xGF% of 73.62. These two were easily ahead of the rest of the pack, the next highest xGF% coming in at 52.04.
GSAx: Demko has been good, but he hasn’t been stealing games for the Canucks. That’s indicated by another statistically rough outing, a GAA of 6.13 and SV% of 0.800% giving way to a -3.13 GSAx for the game. The 6 goals that Demko gave up were divided evenly between high-danger and middle-danger (3 HDGA, 3 MDGA), which indicates that he wasn’t giving up any softies. At the same time, however, Demko isn’t taking goals away from the opposition. That shouldn’t be a problem in most cases, but the Canucks haven’t done him any favours with their team defence being porous thus far.

A line that doesn’t work: It probably doesn’t come as a surprise, but the Pearson-Horvat-Boeser line was the worst statically against Washington, even more so than the fourth line. At 5v5 play adjusted, they recorded a team low in CF% (42.15), GA (2.88), GF% (-41.20), SCA (8.75) and SCF% (46.29). They weren’t able to get anything clicking on offense, and weren’t able to do much in the defensive end either. Overall, this combination should probably not be tried again.
The one where the defence is running out of juice: Quinn Hughes might’ve only spent 3:16 minutes with Oliver Ekman-Larsson, but it’s indicative that the defensive unit is finally starting to crack under the strain of poor team defence. The top 4 of Hughes, OEL, Luke Schenn and Kyle Burroughs were able to keep their head above the water in terms of CF%, all hovering around even, but conceded 25 HDCA combined. Riley Stillman and Noah Juulsen were also caved in possession-wise (CF%s of 45.83 and 41.18 respectively) but managed to suppress any high-danger chances against them. Regardless, there’s only so much that depth defencemen can do when asked to play in elevated roles, and right now Vancouver is showing signs of the breaking point.
Play-driving Podkolzin: An interesting statistical tidbit – JT Miller and Conor Garland’s underlying numbers dropped without Podkolzin next to them. Their CF% were significantly decreased playing away from Podkolzin (Miller – 65.00% to 33.33%, Garland – 78.57% to 20.00%), and their xGF% got cratered (Miller – 77.23% to 14.63%, Garland – 89.97% to 4.38%). This could just be an outlier of a game, but these trends suggest that the Russian might be more important to their success than the surface glance. Keep an eye on how Podkolzin performs on other combinations should the lines be put in the blender again.

CF% – 51.82% HDCF% – 36.84% xGF% – 42.60%
The Canucks did not play a full 60 minutes and got out-chanced as soon as they took their foot off the gas, giving up way too many high-danger opportunities. There aren’t many moral victories to take away from this result, though some bright spots still exist under the surface. Vancouver will match up against another winless team in the Columbus Blue Jackets on their 4th stop of this road trip. This back-to-back may prove critical to this team’s season.
Stats provided by naturalstattrick.com
Editorials
Recent articles from Michael Liu