The Statsies: A dynamic forward duo is emerging for the Canucks despite two losses By Michael Liu
3 months ago
It’s one thing to lose to the Oilers, but the Flyers?
The Canucks had their lead and gave it up again to lose this matinee match-up 3-2 in Philadelphia. Looking at the stats behind it, the game was a tightly contested battle. But, for a team with playoff ambitions, should they really be in the weeds against the Flyers?
Here’s the numbers for this loss.
As always, you can find our glossary guide to the stats discussed in this series here.

The biggest thing that stands out is that while the Canucks had the lead early in this game, they got outplayed in terms of expected goals and possession. Scoring against the flow of the game isn’t a bad thing, but it shows the underlying indicators of how the momentum was swinging during that time. Of course, it was evidenced by getting outshot 14-4 during the first frame. It wasn’t until the second period that Vancouver seemed to dial themselves back into the game, getting a better balance of chances and possessions to whittle down the Philadelphia advantage they built early on.
Unfortunately, as the Canucks swung the game flow in their favour, they also managed to give up 3 goals while doing so. The large drop seen approximately 5 minutes into the second period is due to Kuzmenko’s chance in tight, being a very high xG opportunity that didn’t go in. After that, as Vancouver outchanced the Flyers until the very end, they also got outscored. 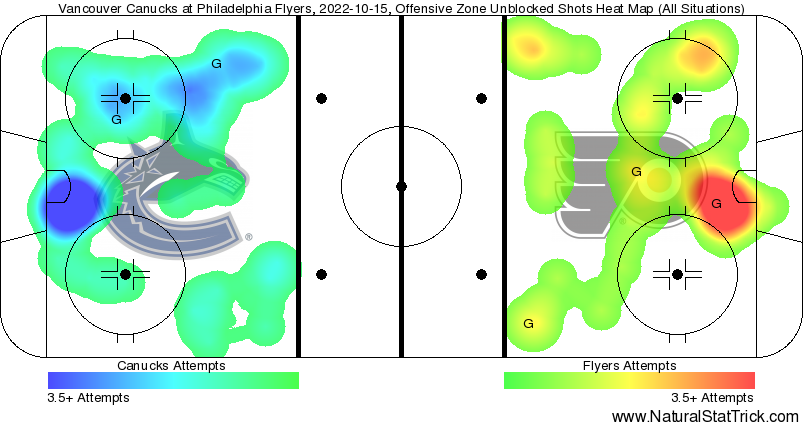 One thing that can be said is that the Canucks were getting their chances last night. That big blue clump right in front of the goal is a good sign, especially with how much they out-chanced the Flyers into the second and third periods. The shots off the right wing are also an interesting point since normally it’s the left side that has a hot spot or two.
On the defensive side, the Canucks gave up a lot in front of their own goal as well, nearly a mirror image of the offensive zone. That being said, they didn’t give up lots of goals in that area. Rather, the goals they conceded against Philadelphia were ones that were from relatively lower xG areas. Either way, there’s work to be done in limiting those high-danger chances.

Corsi Champ: For the second straight game, the Corsi champ is Andrey Kuzmenko. Through two games, he’s arguably been the most dangerous forward in the top 6 and that shone through last night in the advanced stats. Kuzmenko recorded a 70.59 CF%, putting him at a 27.94 CF% rel to his teammates. Along with the possession came 13 scoring chances, with 8 of them considered high-danger. As a caveat though, Kuzmenko never started in his defensive zone, which could be a contributing factor to why his Corsi numbers are as good as they are. Check out his event map though, where he’s all over the net front: 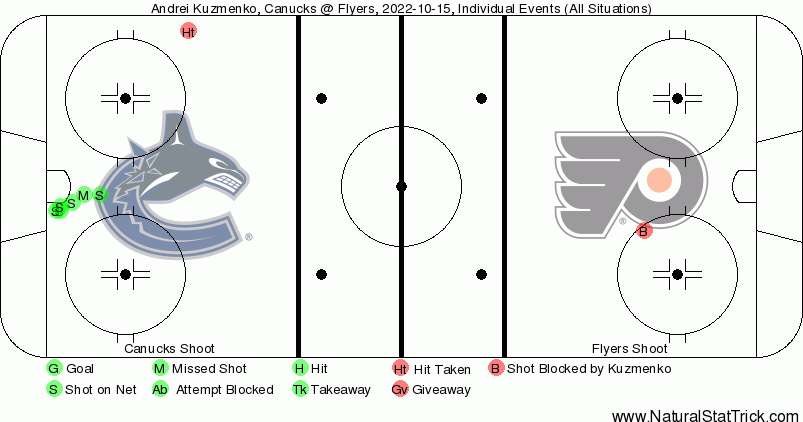 Corsi Chump: Curtis Lazar earns this title among players that completed the game, but wasn’t bad despite this. His 31.25 CF% was a team-low, but Lazar took the most faceoffs in the defensive zone by a forward (7). He also started the most amount of shifts in the defensive zone (6) and still managed a positive high-danger chance for percentage (66.67%). Essentially, Lazar had a good defensive game that was marked by a lack of puck possession, but also one that didn’t yield many opportunities to his opponents.
xGF: As for the expected goals, Elias Pettersson gets this game’s title thanks to his 2.12 xGF. The Swede has had his chances so far into the season but needs to start making them count, going pointless against the Flyers. While Pettersson did lead the way in terms of pure xGF, he did concede an xGA of 1.06 which drops his xGF%. This category still goes to him last night, but a shoutout to Conor Garland for recording the best xGF% (75.94) in Philly.
GSAx: Demko got his second straight start, and for the second straight game, he was pretty excellent between the pipes. The reason why the Canucks took a 2-0 lead out of the first period was thanks entirely to Demko’s stellar play in the face of relentless Flyer pressure. All of this said, this won’t be reflected in his goals saved above expected, with a -0.41 not exactly matching his exploits. This could be chalked up to the goal Demko gave up to Tony DeAngelo, a shot from the point being one of the lowest xG shots possible in the offensive zone. Another contributing factor would be how the Canucks managed to drive the xGF of the Flyers down through the second and third periods.

Dynamic Duo: Pettersson and Kuzmenko once again were statistically the best forwards for the Canucks. Though neither showed up on the scoresheet, they led the team in xGF (2.12 and 1.99), scoring chances (14 and 13), and HDCF (8 apiece). The pair spent the most time together on ice with each other (12:12 TOI), and there appears to be some chemistry forming between those two already. It’ll be interesting to see if their impact will be boosted by Ilya Mikheyev joining their line once healthy, or if Nils Hoglander is the better fit.
So far, they’ve been the Canucks’ most promising two forwards through two losses.
D(efenceman)-Day: A couple of defencemen had themselves a game last night. Chief among them would be Quinn Hughes, who was sheer dynamite from the back end. He led the D-corps in CF% (63.27), SCF (10), and HDCF (6), all the while leading the entire team in Corsi for with 31. It’s a performance statistically that reminds all of us Quinn Hughes is an elite offensive defenceman that still potentially has room to grow.
As well, another shoutout to Kyle Burroughs who opened up the scoring with a veritable snipe. He had himself another solid game, leading the defence in xGF% (67.91) while only giving up two high-danger chances against. It’s only two games into the season so do take that context, but a great start so far from a depth defenceman playing in an elevated role.
Figure it out: Yeah, JT Miller’s self assessment is correct. His start to the season has not been good at all, and this is another game where the stats back up the eye test. Miller’s possession numbers are middling (50.00 CF%), but the real shocker is in the xGF% department, where he’s 5th last on the entire team with a 31.75. Granted, that Boeser-Miller-Pearson line is all in that range, but it stands to point out that Miller had the most trouble against the likes of Kevin Hayes, Ivan Provorov, and Tony DeAngelo, conceeding double-digit Corsi-against to them.

CF% – 51.96% HDCF% – 54.17% xGF% – 50.37%
A rough statistical start led to a 2-0 lead, while battling back meant giving up said lead. The Canucks had the balance of everything last night, and came up short against John Tortorella’s Flyers. Vancouver will be back in action on Monday against the Capitals in Washington DC, where they hope to record their first win of the season.
Stats provided by naturalstattrick.com
Editorials
Recent articles from Michael Liu