The Statsies: The Canucks… should’ve won last night’s game against the Lightning? 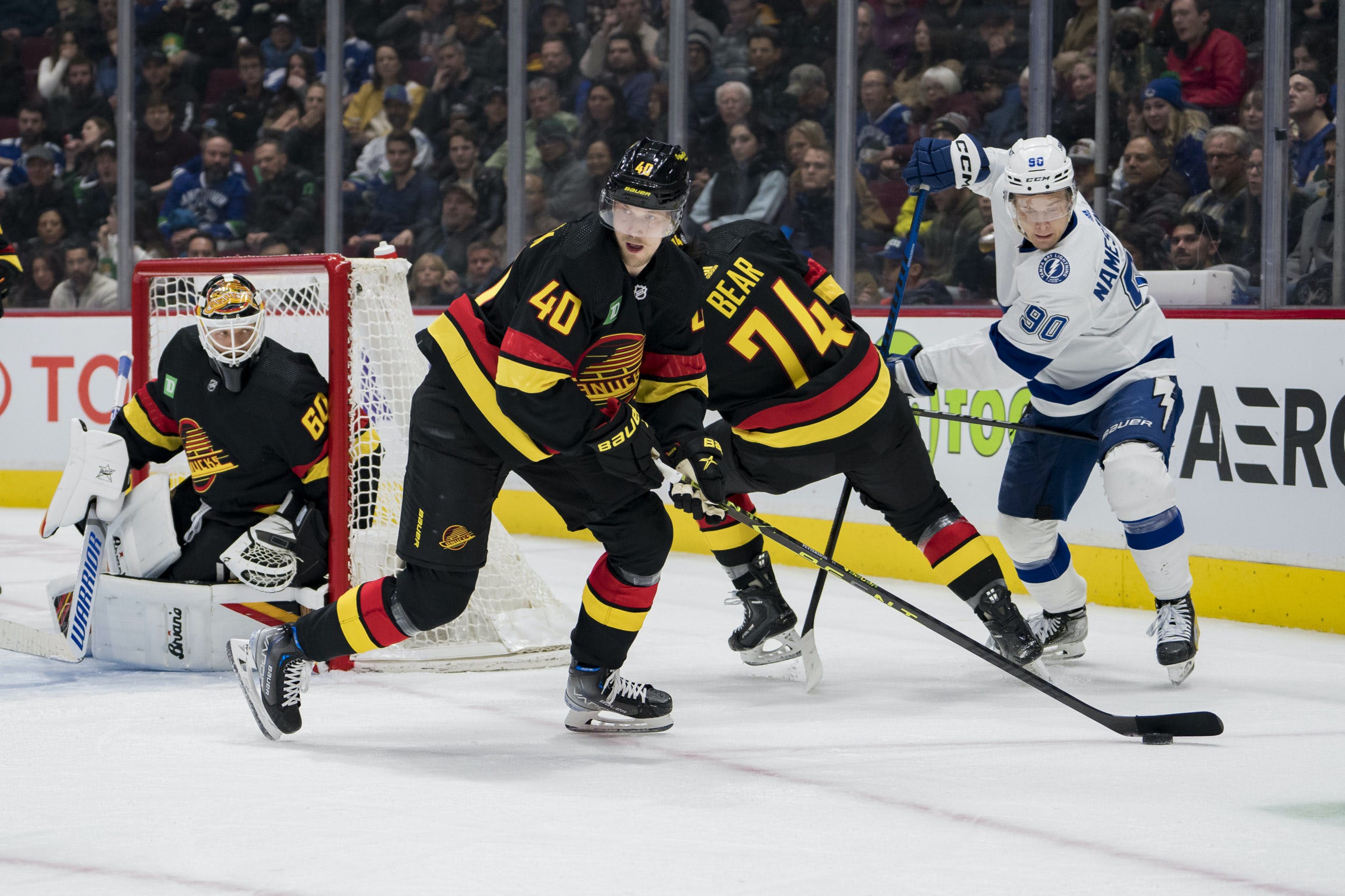 By Michael Liu
15 days ago
Be sure to check out NHL betting odds site Betway for the latest Canucks game day odds!
There was one good thing out of this result.
The Vancouver Canucks returned home from the road trip of nightmares to lose again, this time falling 5-2 to the Tampa Bay Lightning. A 4-0 deficit in the first period pretty much sums up how the night went on the scoreboard for them, but interestingly enough, the Canucks weren’t awful statistically. In fact, without looking at the score, Vancouver’s stat sheet looked better last night than it has in some wins.
Here’s how this loss shaped up, by the numbers.
As always, you can find our glossary guide of advanced stats here.

Something remarkable about this game flow chart is that in theory, Vancouver controlled the game from start to finish. There wasn’t a single moment where Tampa had a superior advantage in puck possession or xG, suggesting that the Canucks had the lions share of both across all 60 minutes. The home team held 68.14 of the CF% share, as well as a 3.76-2.18 xGF lead by the end of the game. It’s definitely interesting to see, especially given the score and circumstances of how they lost.
A potential explanation for why this game flow looks as good as it does could come down to a matter of efficiency. The Lightning didn’t have to put up incredible metrics to go up 4-0. In fact, at that point, they could probably have just played more conservatively, letting the Canucks run around with the puck but preventing them from generating anything of substance. Capitalizing early was huge for Tampa, and possibly allowed them to save energy as they head on their own road trip. 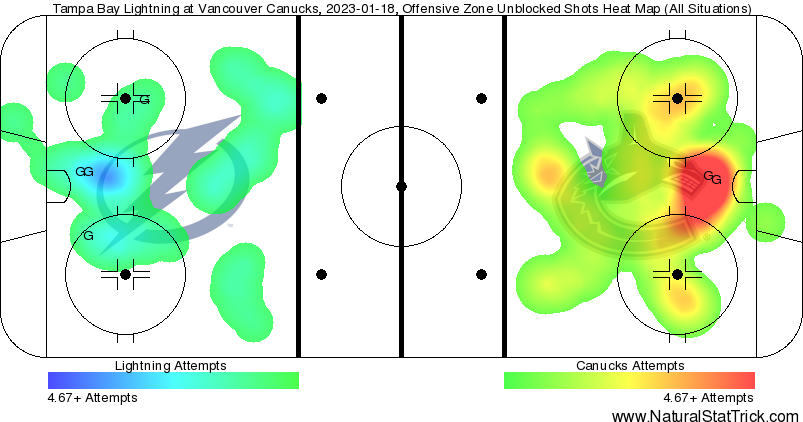 Again, probably one of the best heat maps the Canucks have put up all season. They prevented a high concentration of high-danger chances in front of their own net, with the Lightning having a light blue patch in the slot. On the offensive side, Vancouver was able to get in tight, forcing Brian Elliott to make a couple of saves. The Canucks out-chanced Tampa 36-17 in this game, with a 17-9 edge in high-danger chances. It looks great, on paper.
Unfortunately, expected goals will remain expected goals until they are converted. What separates good teams from bubble teams is the skill to finish their chances. The Lightning were clinical with the chances that they got, burying 3 out of the 9 high-danger chances they got in the first period, the fourth recorded as middle-danger. Meanwhile, the Canucks goals came on the power play in the form of two high-danger chances sneaking by out of their 17 total. It makes for a wide disparity in play and on the scoreboard, as was shown last night.

Corsi Champ: Bo Horvat turned in a very good performance for this one. The captain finished as the leading Corsi man for the Canucks, coming in with an 81.63 CF% to lead all skaters and a 23.82 CF% rel to the team average. Horvat was on the ice for two goals for and one goal against, adding an assist last night as well. It comes on the back of a dominant performance offensively, showering the Lightning in chances when he was on the ice. Horvat had 18 scoring chances for, 9 of them high danger, with just one scoring chance against. This led to a sizeable 1.73 xGF tallied, good enough for third on the team. As the trade talks begin to swirl up, performances like these will probably drive Horvat’s value up, in spite of the results surrounding him.
Corsi Chump: Will Lockwood had avoided this for the last while, but returns as the Corsi chump with a team-low 37.50 CF%. In a game where the Canucks heavily out-possessed the Lightning, it makes this number stand out all the more, Lockwood rolling in a CF% rel of -35.70. The former second-round pick wasn’t awful, but he was still on ice for two goals against without chipping in much offensively either. Lockwood only managed 3 SCF during his 10:37 TOI, with 5 SCA coming the other way.

xGF: Quietly, the Canucks’ depth is stepping up their game. Jack Studnicka led Vancouver in xGF last night, topping the team with an 84.45 xGF%. He wasn’t on ice for any goals for or against, which is honestly not bad for a bottom 6 forward. Studnicka posted the lowest xGA (0.11) on the roster, which contributed to his high xGF rating. At the same time, he also helped generate eight scoring chances in just 10:43 of ice time, with four of the chances being in high-danger areas. It was a quietly effective game for Studnicka, and a performance that’s sorely needed for this hurting team.
GSAx: This one is going to be a rough one. Let’s start with Spencer Martin, who got yanked after giving up four goals on 10 shots. Tampa racked up an xGF of only 0.62 on Martin, which destroys his GSAx and puts it at a -3.38 on the night. 3 of the goals he conceded were high-danger, and one came at middle danger. On the other hand, Colin Delia came in for relief and didn’t give up a single goal. With the Lightning putting 1.29 xGF against him, Delia’s GSAx remained a flawless 1.29. It’s tough to see Martin struggle as much as he has recently, with the book pretty much being out on him on top of his team’s defence not doing him any favours. But, at the same time, it’s nice to see that Delia’s run isn’t just a flash in the pan, doing well for himself in a backup role.

A look at Quinn Hughes’ dominant night: Sometimes I wonder how Quinn Hughes would look alongside a Devon Toews-like partner. The things that the defenceman does for the Canucks are absurd, and it’s criminal that he hasn’t had a bonafide top-4 partner since Chris Tanev. Hughes turned in a masterful performance against the Lightning, statistically dominating his opposition. In 26:49 TOI, he racked up a team-leading 48 CF, tied for second in CF% (80.00), led the team in CF% rel (25.28), contributed the most xGF (2.16), had a team-most 22 scoring chances for, and led the team in HDCF (10). This was all done against the very best that the Lightning had to offer, with the large majority of Hughes’ 5v5 ice time coming against Tampa’s top 6 forwards and top 4 defencemen. Perhaps a big reason why his performance saw an uptick was the reunion of Luke Schenn, who isn’t exactly a top-pairing defenceman, but has been the best fit with Hughes so far this season. It’s a bright spot to see what Vancouver has in their star defenceman this year, in an otherwise gloomy outlook at their future.
Dr Jekyll and Hyde line: Sometimes it feels as if this particular line encapsulates Vancouver’s inconsistencies. Out of all forward lines, JT Miller – Bo Horvat- Conor Garland was the most effective last night. They had a team lead in CF% (88.89), xGF (0.84), xGF% (94.37), SCF (8), SCA (0), and HDCF (5). This combination even had Miller tracking back to play excellent defence on a potential empty net goal.
The reason for the heading of this musing is because of how this line struggled mightily against the Hurricanes, unable to handle their third line, but in this one against Tampa, was able to match up against both first and second lines without any issues. It’s a frustrating microcosm of this season, where the Canucks will look flying in one moment, and come crashing back down to earth the very next glance at the team. Miller-Horvat-Garland always has the potential to be the best line for the Canucks on any given night. Sometimes they are… and sometimes they aren’t.

CF% – 68.14% HDCF% – 65.38% xGF% – 63.26%
What should’ve been a celebration of the return of the skate jersey after a touching ceremony for Gino Odjick, instead turned into another loss in a mural of misery for this franchise. The Canucks should have dominated, should have won by the stats. But should’ve is the story of this team, and they’re not deviating from the narrative at all with this loss against the Lightning. There were remarkable performances by key players, which should always be acknowledged for what they are. But until this team navigates the situation that they’re currently in… it’s hard to be optimistic about them stringing any meaningful results together for the future.
Vancouver turns their attention to the Avalanche coming to town tomorrow, with a much healthier team arriving than the last fixture.
Stats provided by naturalstattrick.com
Editorials
Recent articles from Michael Liu