The Statsies: Canucks effort against the Blues doesn’t get any prettier when you look at the numbers 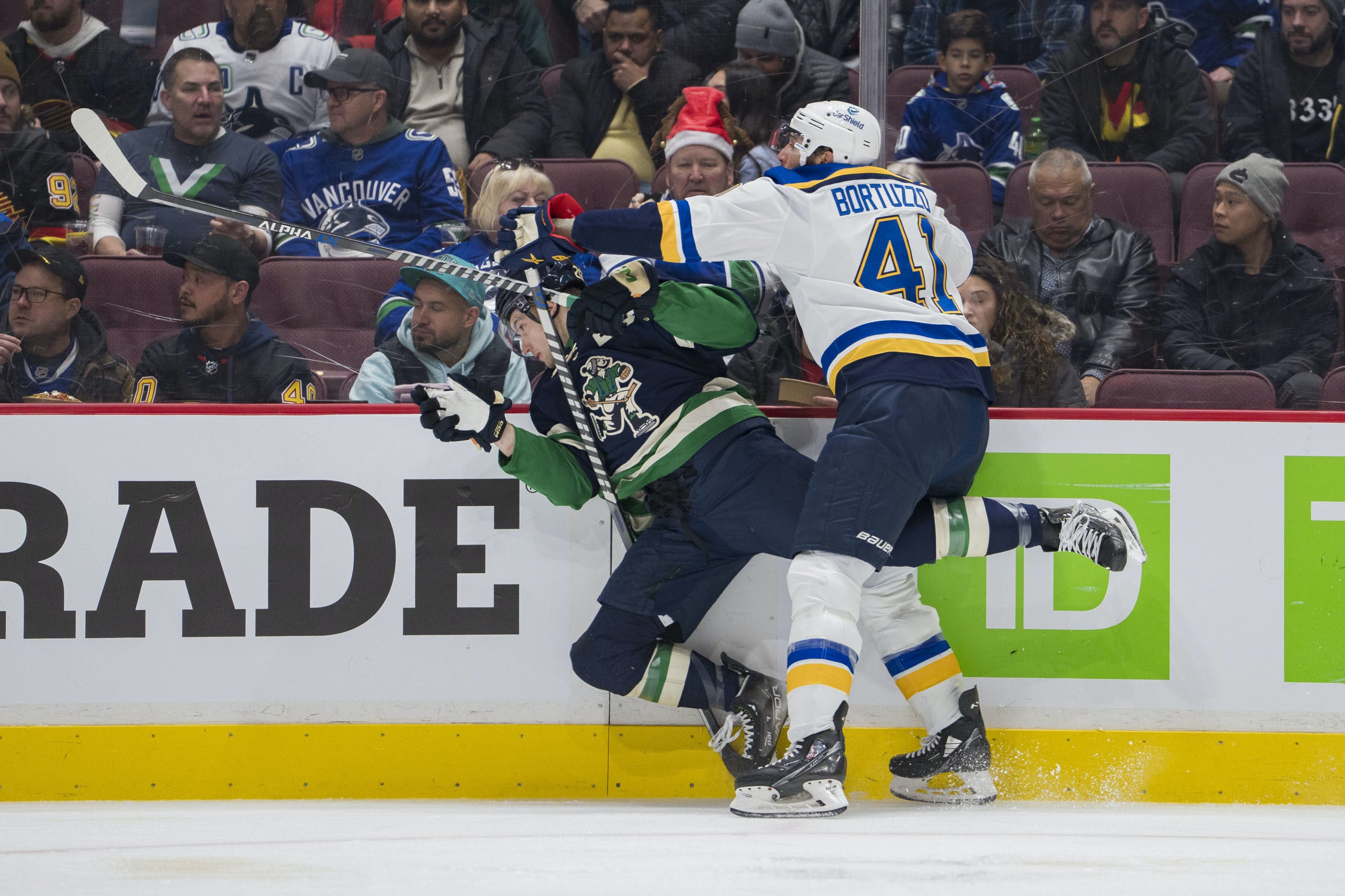 By Michael Liu
1 month ago
Be sure to check out NHL betting odds site Betway for the latest Canucks game day odds!
I guess this is as consistent as this team gets.
For the second straight game, the Vancouver Canucks lose 5-1 at home, this time against the St. Louis Blues. It’s strange to think that these two teams played just two years ago in the playoffs, and have taken different trajectories since then. While the stats might be generous to the home team, make no mistake: Vancouver got the result that they deserved.
Here’s the loss unpacked, by the numbers.
As always, you can find our glossary guide of advanced stats here.

At first glance, this doesn’t look awful. If anything, one could probably draw the conclusion that the Canucks were unfortunate to be on the losing end of this game. However, much of their first-period spike is buoyed by those two power plays they received early. In classic Canucks fashion, they weren’t able to capitalize, which shifted the momentum in favour of the Blues.
Another point of concern is Vancouver’s inability to play at 5v5. This game was much of the same, letting St. Louis dictate much of the pace at even strength. When looking only at 5v5 play, the Canucks were heavily outplayed in the first and second periods, posting a CF% of 35.71 and 45.45 respectively. The only time they seemed to turn up to play was in the third, but by that point, it was much too little, much too late.

This is a bit of an oddity. For one, Vancouver got the higher concentration of high-danger opportunities between the two teams, with their hot spot far darker than anything the Blues managed to create. Credit where credit is due, the Canucks did get the chances that they wanted last night. That being said, they didn’t manage to convert on most of them, leaving them high and dry in a game that really needed a good finish.
What’s also interesting to note is just how spread out St Louis’ chances were in the offensive zone. It feels like a repeat of the previous game where Spencer Martin had issues stopping pucks, and the distribution of where those goals came from last night adds more fuel to that fire. If there is one positive to take away, it would be that the Canucks didn’t get cratered in front of their own net, as is usually the case.

Corsi Champ: For the second game in a row, Bo Horvat leads all Canucks in Corsi. His 76.92 CF% was comfortably ahead of second place, putting up 30 CF while only yielding 9 CA. The Canucks also managed to generate 17 shots on net, giving up 4 the other way with the captain on the ice. Interestingly enough, most of Horvat’s TOI was spent against Ryan O’Reilly’s line, showing that he wasn’t just playing against cannon fodder too. Unfortunately for Bo though, his good play didn’t really make much of a difference in the end result.
Corsi Chump: The worst Corsi man on the Canucks was Dakota Joshua. His line just so happened to be up against Jordan Kyrou, and bore the brunt of that offensive assault. Joshua finished with a 32.00 CF% last night, followed closely by linemate Nils Åman’s 33.33. Surprisingly, Joshua actually managed to generate some decent xGF, even as he was getting caved in. It’s what brings his numbers up just that little bit, making them look alright in light of giving up three goals against.

xGF: This game’s winner is Horvat again, posting a whopping 84.28 xGF%. He was nearly the best on both ends of the ice, coming in 2nd in xGF (1.73) and xGA (0.32). That ratio isn’t all empty either, as Horvat was responsible for 10 high-danger chances for out of his 17 scoring opportunities, with merely 1 high-danger chance against out of a possible 4 SCA. It’s one of those performances that shows the value that Horvat has — but yet, another one that highlights how futile some of the efforts are. He’ll be looking to bury some of those chances he creates in the near future.
GSAx: Martin could use some rest, and Collin Delia should start. That’s all that really needs to be said as another shaky outing between the pipes further costs the Canucks. Martin faced an xGF of 2.87, so with the 5 goals against charged to him, his GSAx stands at a -2.13. It was a tad bit better than the performance against the Jets, but Martin still gave up 4 middle-danger goals and 1 high-danger. Perhaps this is a blessing in disguise: if Vancouver got league-average goaltending, they might be deluded into thinking this team was a lot closer to contending than it actually is.

Riding the best line: Bruce Boudreau leaned heavily on one line against the Blues, the only trio to play more than 10 minutes together at 5v5 play. Horvat found himself flanked by Brock Boeser and Ilya Mikheyev and made the most of it, playing some excellent hockey together. By far, this line was the best out of any group the Canucks could ice, leading the entire roster across all categories (77.27 CF%, 81.94 xGF%, 0.75 xGF, 11 SCF, 8 HDCF). It shouldn’t be a surprise that Boeser-Horvat-Mikheyev supplied the only goal of the game, being the only combination that did anything threatening in the offensive zone. With Elias Pettersson still fighting off an illness, there’s a chance this unit might see an extended run.
Schenn suffering: I don’t know why exactly Luke Schenn was paired up with Oliver Ekman-Larsson, but it was clear that he did not mesh well with the Swede. Schenn was the worst Canuck defenceman statistically, with the lowest CF% and xGF% to go with the 9 scoring chances against that he faced. His usual partner Quinn Hughes wasn’t much better in the latter department, with 7/9 scoring chances recorded as high danger in his case. But, Hughes was able to buoy himself with some good offensive numbers, something that Schenn couldn’t benefit from. OEL wasn’t particularly bad… but he also didn’t do much that had positive impacts. A solid meh, where the defence definitely could’ve used some oomph.
J.T. Miller is not a centre: Miller got swung back into the middle of the ice, pivoting for Conor Garland and Sheldon Dries. Fine, he isn’t exactly working with a lot of tools, but for a player that got a hefty extension in the offseason, one would expect him to be driving the play for his line. However, this is the exact opposite. Garland and Dries actually posted better metrics playing away from Miller last night. Miller saw his CF% drop from 41.18 to 12.50 without Garland, and 44.44 to 25.00 without Dries. His xGF% also dropped significantly without his wingmen, suggesting that Miller was the beneficiary of playing alongside those two. It’s not an encouraging sign when it comes to Miller’s play-driving ability, and it’s no wonder this line saw even less ice time than the Andrei Kuzmenko-Lane Pederson-Curtis Lazar combination.

CF% – 52.88% HDCF% – 60.710% xGF% – 59.00%
The stats were far too kind to the Canucks in an ugly 5-1 loss at the hands of the Blues. A remarkable apathy seems to not only have set in with the fans, but the team itself. Though they’re creating the chances that they want, there’s not enough finish, nor good enough habits to build off of anything of the good things that they’re doing. It’s as if the Canucks are just going through the motions of being a “contending” team.
Vancouver will play host to the Seattle Kraken when they roll into town on Thursday. Perhaps that matchup will be the jolt that this team needs, one way or another.
Stats provided by naturalstattrick.com
Editorials
Recent articles from Michael Liu