The Statsies: Boston loss a game where the Canucks probably deserved better 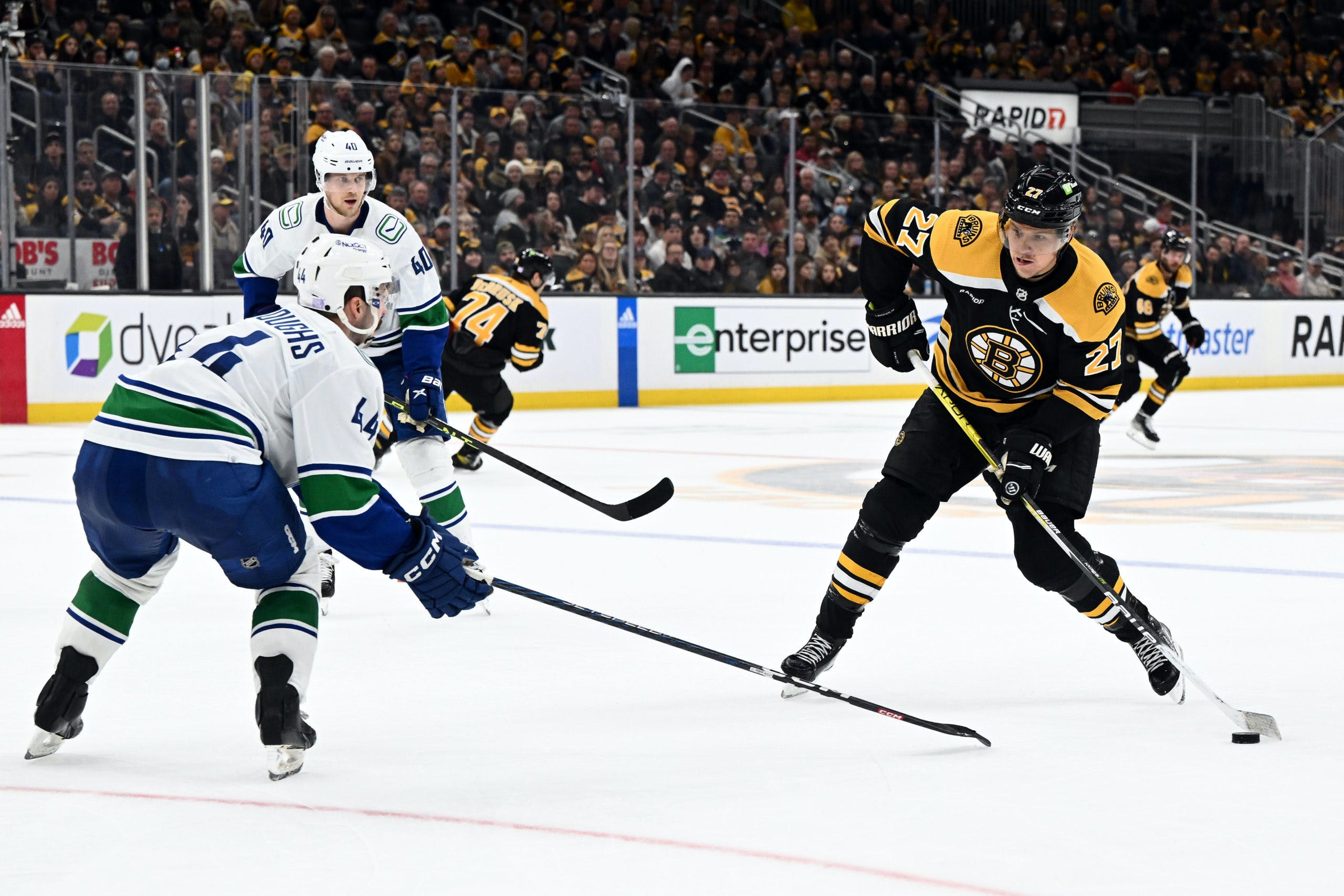 By Michael Liu
2 months ago
Welcome to The Statsies, brought to you by NHL betting site Betway!
11 years ago, these two teams met in the Stanley Cup Finals.
Since then, the Canucks have made the playoffs four times. The Bruins have missed the playoffs twice to go with 2 more trips to the finals. It’s a tale of two paths diverging drastically, from the same starting point with so many similarities.
I digress. This is the stats recap, after all.
Vancouver falls 5-2 to the Boston Bruins, another loss in the second half of the back-to-back. Contrary to the eye test, this team wasn’t awful last night. They probably didn’t deserve to lose the game by three goals.
The 2011 Canucks also didn’t deserve to lose 4-0 in game 7.
Here’s how this game played out, by the numbers.
As always, you can find our glossary guide of advanced stats here.

Early on in the first period, the Canucks looked to have found their legs on the road trip. They’d responded to the opening goal by the Bruins, and were battling hard. Unfortunately, from that point on, Boston shifted the tides in their favour. By the end of the first frame, the Bruins held a commanding lead in CF% (66.67), HDCF% (66.67), and xGF% (62.08). It clearly paid off, as Boston was able to ride this momentum into the second period to pull ahead by three goals.
Interestingly enough though, Vancouver was able to battle back during the middle frame. They were able to record 62.50 CF%, 71.42 HDCF%, and 55.99 xGF% by the end of the period. It’s a small positive to ride out a rough stretch, but one that hopefully can become a trend without conceding the goals that they did. The Canucks continued this strong play into the third, where they once again controlled most of the play thanks to the three power plays they got. Unfortunately, their 5v5 play let them down (47.83 CF%, 0.27 xGF) which eventually led to the Bruins icing the game in the end. 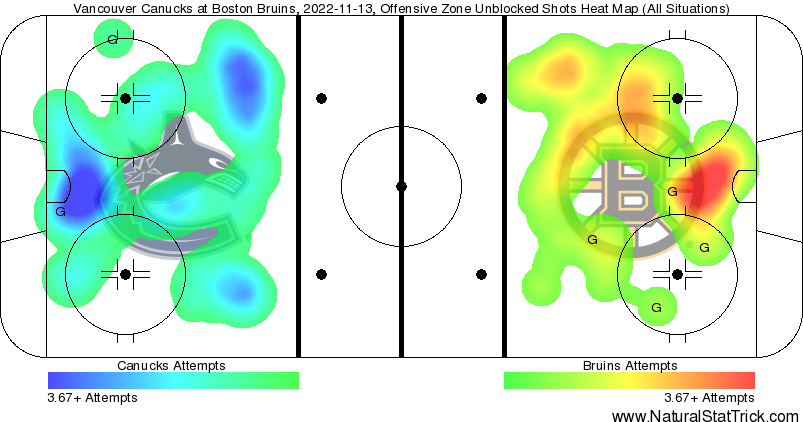 Not an awful display on the heat map. A factor in this spread should be the number of power plays each team had, with six for the Bruins and seven for the Canucks. This would increase the rate of chances in tight against the netminders, which is clear to see. However, accounting for this, Vancouver only maintained a hotspot from the point when adjusted for 5v5 play. This indicates two things – the Canucks focused their chances from the perimeter, and not many opportunities came from in tight during even-strength play. Not ideal, especially when you’re looking to come back in games.
On the other hand, the Bruins had a hot spot in even-strength play, right in the middle of the slot. It’s not an area you want to be giving up, and unfortunately for the Canucks it’s become a pattern of doing so. In general, Boston was able to attempt a lot more of their shots from closer, perhaps suggesting that Vancouver’s defence is collapsing too much and giving them too much space to work with.

Corsi Champ: JT Miller earns this one against the Bruins. Posting a 63.83 CF% along with 30 CF on the night. It wasn’t a bad effort from the new $8 million man. Miller was second on the team in shots with 18, coming behind Bo Horvat’s 19, while also recording the second-highest xGF (1.37) on the team. We all know that Miller can score, that much isn’t a question. What has been a question is his defensive work, where he was the third-worst forward in xGA (0.40) during even-strength play.
Corsi Chump: This one goes to Luke Schenn, who posted a 35.29 CF% to comfortably trail the team. However, a lot of context has to go into this. Firstly, Schenn was playing against the Bruins’ top line and top defence pairing for the large majority of the night. With that in mind, in 16:58 on ice, Schenn only gave up six scoring chances against, with three of them being high-danger. This is also a result of the PK time that he logged, as during 5v5 play, Schenn posted a comfortable 47.83 CF%, which isn’t bad at all. As well, Schenn got a disproportionate amount of his shifts starting in his own end (9 defensive shift starts out of 23 total, 12 defensive zone faceoffs out of 23 total), which could’ve affected the Corsi numbers.

xGF: This game’s xGF winner is Brock Boeser. Picking up one assist against the Bruins, Boeser’s return from injury has been decent thus far. He recorded an xGF% 67.18 to come just ahead of Miller for first on the Canucks, thanks to better xGA (0.5) on the night. Bo Horvat led the Canucks in raw xGF (1.46), but an xGA of 1.23 drags his xGF% down lower.
GSAx: Oh Demko. He’s definitely not the problem with this team, but with the way that he’s playing, he has been a problem. The Bruins posted a 2.17 expected goals on the night, so with Demko giving up four on 31 shots, his GSAx on the night is a -1.83. Not great, especially since this makes him the worst goalie in the league in GSAx (-12.72), with the second-most goals conceded among all netminders this season (44). Not a single goal last night was considered high-danger either. Demko needs to get his confidence back, and fast.

Is Boeser the best fit with Pettersson?: This might be controversial, but Brock Boeser might not be the wing man for Pettersson, at least not right now. Slotting into this line in the place of Andrei Kuzmenko, Boeser-Pettersson-Mikheyev was the second-worst unit in CF% (46.15). While this line was first in xGF, consider that Pettersson and Mikheyev accounted for a combined 0.27 xGF, while Boeser only posted an individual xGF of 0.04 at 5v5 play. Both Pettersson and Mikheyev also recorded better CF% numbers without Boeser than with. I would be interested to see if adding Kuzmenko into the mix would help with all of this, but in this small sample size, Boeser doesn’t have the same magic as he does on the Lotto line.
OEL-Bear: Surprisingly, this pairing is holding its own against decent competition. Ekman-Larsson and Bear are nearly breaking even in CF% together, which is solid considering the minutes that they are pressed into. As nervous as this makes me to say, this pairing also poses quite the run-and-gun threat too, with a 62.75 xGF% together at 5v5 play. Much more remains to be seen, but the early returns have been decent thus far with the two.
Why does this team scratch Kyle Burroughs: One of the more intriguing points from the statsheet was seeing the impact that Kyle Burroughs had alongside Quinn Hughes at 5v5 play. Together for 6:01, they recorded a CF% of 66.67 and an xGF% of 69.36, which includes a team-low 0.05 xGA. Hughes-Schenn recorded a 0.07 xGA, for context. Burroughs ended up splitting time between Hughes and Tyler Myers, which is a reason why his overall numbers don’t look as pretty. With Myers, Burroughs saw his xGA jump to 0.21 and his CF% drop to 57.14. He’s been one of the best defenders for the Canucks to this point in the season. Whether that’s a good or bad thing is up for debate.

CF% – 50.00% HDCF% – 52.38% xGF% – 50.37%
A bad stretch of hockey once against cost the Canucks, burying them in a hole too deep to dig themselves out of. However, the scoreline is a little harsh for the effort that they turned in, and Vancouver can take solace in that they were doing the right things and getting opportunities to fight their way back into the game. Now, it’s about finishing those chances off.
The Canucks are back in action on Wednesday, taking on the Buffalo Sabres to round off a relatively unsuccessful road trip.
Stats provided by naturalstattrick.com
Editorials
Recent articles from Michael Liu