For Thatcher Demko, path to NHL success has unusual roots 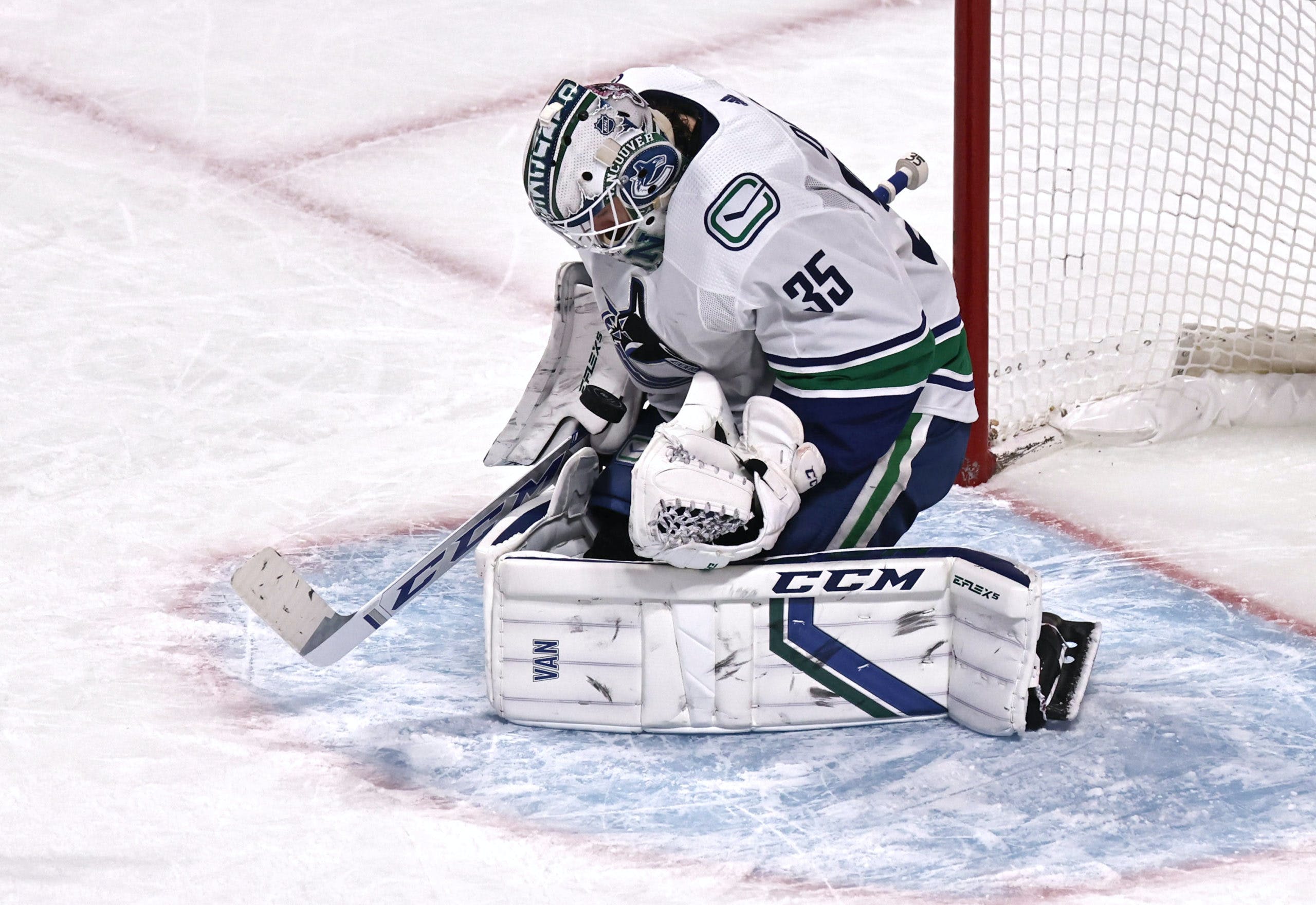 By Noah Strang
1 year ago
Thatcher Demko is no stranger to success.
In fact, from his time with the Omaha Lancers of the USHL in 2010-11, all the way to the present day as a professional with the Vancouver Canucks, he has never had a season in which he lost more games than he won. Not one losing season over a time period that spans a decade, four different levels, and five unique teams in five different cities.
Heading into this 2020-21 season, Demko had large shoes to fill after the departure of Jacob Markstrom. Markstrom had won the Cyclone Taylor Trophy as the team’s MVP in both 2018-19 and 2019-20, and his absence left a big question mark in the crease as he had often been forced to bail out the team’s leaky defence.
Veteran goalie Braden Holtby was brought in during the offseason to help ease Demko’s transition to the starter role, but he hasn’t been needed. We’re now past the midway point of the season and not only has Demko established himself as the Canucks’ go-to guy, but he’s also proven that he’s one of the best goalies in the entire NHL.
Being doubted isn’t something new for Demko. As only the third California-born goalie to play in the NHL, his background is unique to say the least. Yet Demko has never let his non-traditional hockey background hold him back, and as he blossoms into a full-time NHL goalie, he’s leading the way as a new type of superstar whose hometown is better known for surfing than skating.

From the moment he got to put on a pair of goalie pads as a four-year-old with the San Diego Ice Arena hockey program, Demko felt drawn to the crease. “I think when I was little it was about the pads,” he told Vice News for a 2015 feature, “I thought the pads were really cool.”
San Diego isn’t a hockey hotbed, instead more well-known for its sandy beaches and blazing hot weather, but that wasn’t going to stop the young goaltender from finding ways to get involved with the game. He knew that to achieve his dream of being a professional he was going to need to find ways to play against the best, and thus from a young age his hockey journey was uprooting him from his home.
His first move was from San Diego to nearby Los Angeles. There he stayed with a billet family while he got the chance to play for the Los Angeles Junior Kings, a minor hockey program that has pumped out NHLers such as Bobby Ryan and Beau Bennett.
There are only ten current-NHLers that were born in the Golden State, and Demko is one of only three California-born goalies to ever play in the NHL. The other two are current Chicago Blackhawks goalie Collin Delia, as well as John Blue, a goalie that played forty-six NHL games across the early 1990s.
As a former professional hockey player, Blue would take part in California-based skates that were filled with ex-pros. As he remembers it, when Demko was around 15 or 16 he asked to take part in these skates but was told no by the owner of the rink due to the high level of play. Not one to fold in the face of adversity, he continued to ask until they let him play. Demko was just 15 years of age, but Blue remembers being surprised about how well the teenager fared against the group of ex-pros.
Soon Demko’s hockey journey would take him away from his sunny home state of California — across the country to Nebraska to be exact — and one step closer to NHL stardom, even if he didn’t know it at the time.

Moving on to Colder Climates

Danielle Demko, Thatcher’s mother, didn’t like the sound of her son moving so far at such a young age. The Omaha Lancers of the USHL were after Demko, but as Danielle remembers it, she wasn’t so keen on the idea. “I was like, ‘Yeah, we’re not doing that,” she told Vice News back in 2015. However, Thatcher wasn’t going to be deterred.
“He waited until I finished and he said ‘Mom, this doesn’t happen to kids from California. You and Dad have laid a great foundation, you need to let me go.’ And I sat there and I thought, ‘I’ve gotta let him go.'” recalled Danielle.
A strong season in Omaha, Nebraska led to a season with the US National Team Development Program in Michigan where Demko got the chance to develop his game alongside the best of the best from around the country. This was the start of a relationship between USA Hockey and Demko, a combination that fans could potentially see reunited at the next Olympics.
Still just a teenager, Demko’s strong play was catching people’s attention across the country, including that of Boston College head coach Jerry York. Once Demko committed to the school, he decided to graduate high school early even though it required him to complete his entire senior year over the length of one summer. Once again, this challenge was not going to stand in his way, and after spending a summer studying whenever he wasn’t training for hockey, he completed his high school diploma early.
What followed was a historic college career filled with a multitude of both individual and team accolades. He backstopped his teams to Frozen Four appearances in 2014 and 2016 where they fell just short of their ultimate goal. He also had some great individual runs, including a shutout streak of over 200 minutes.

The Vancouver Canucks were impressed enough to take Demko in the second round of the 2014 NHL Draft. For the Demko family, the location represented life coming full circle as father Brenton spent two years studying at the local University of British Columbia.
After a few years spent climbing the ranks, Demko has now established himself as the Canucks’ go-to guy in the crease and has excelled while doing it. For the kid from San Diego, all the sacrifice and hard work have finally paid off.
Demko is a part of a new wave of superstars born in warm-weather locations that are taking over the NHL. Fellow Californian Auston Matthews is perhaps the league’s most marketable star, and Columbus Blue Jackets defencemen Seth Jones was born in Arlington, Texas. As hockey spreads across the United States (and the world), the league benefits from being able to draw on a larger player pool.
“When Thatch played for SDIA (San Diego Ice Arena) and no one took him seriously, he was so determined and knew he had what it took to be a successful goalie,” said Danielle to EP Rinkside in March of 2020. “Believing when you can’t always see it; that is the difference between good and great.”
For a San Diego-born goalie, at times it was hard to see it, but Demko never stopped believing and Canucks fans are now getting to enjoy the results.
Uncategorized
Recent articles from Noah Strang