Thatcher Demko offered one last plea for the Canucks to re-sign Ian Clark, but will they listen? 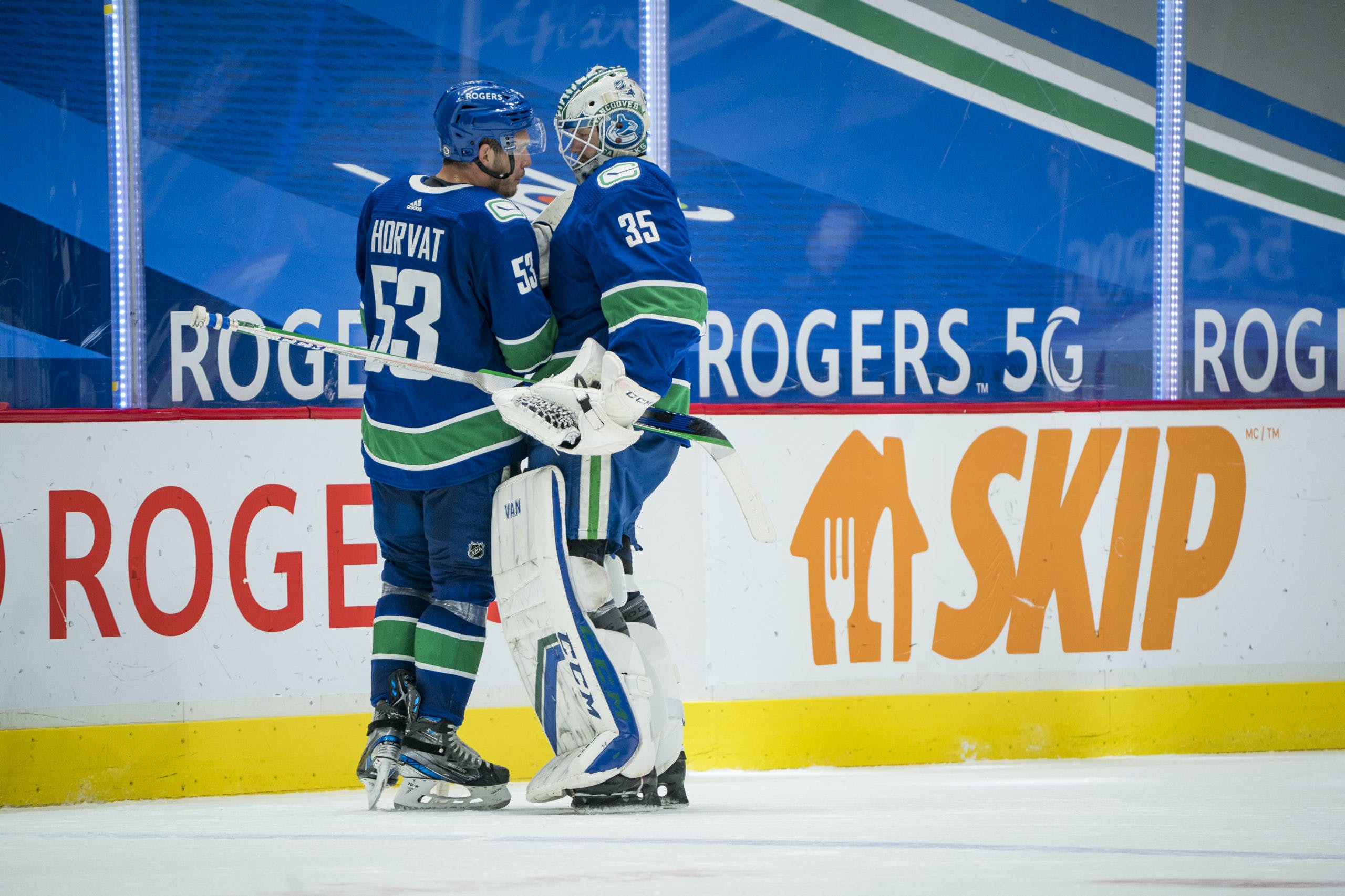 By David Quadrelli
1 year ago
You’ve heard it all before.
A goaltender calling Vancouver Canucks goaltending coach Ian Clark the best coach they’ve ever worked with is nothing new.
Last season, Jacob Markstrom said the same thing, and attributed Clark’s guidance to his ability to improve the way he did over his time with the Canucks.
Both of the Canucks’ current netminders, Thatcher Demko and Braden Holtby, have praised Clark in the past and at various points this season as well.
Just last week, prospect Michael DiPietro called Clark “the best goaltending coach in the world.”
Hearing a goalie say these things is nothing new.
But hearing a goalie say what Thatcher Demko said so candidly after his club’s 4-2 win over the Calgary Flames this afternoon?
Yeah, that’s new.
“Clarkie is, he’s unbelievable. I mean, I owe probably just about everything to him,” said Demko. “Obviously I’m putting in the work, but the way he’s guided me and mentored me, it’s been amazing. I just hope that they can figure something out and have him return. I think the momentum that him and I have right now is exciting. I think that there’s still a ton of room for me to grow. The work that he and I put in over the last few years, just the habits and the routines and the way that we’re able to think the game and be on the same page now, is something that I’d love to continue to do down the stretch here in the next few years. I really hope he gets back here.”
Thatcher Demko is this team’s franchise goaltender. They made that clear when they extended him for the next five years to the tune of $25 million.
The Vancouver Canucks’ franchise goaltender just made his desire to have a coach return known publicly.
If Clark’s (or Demko’s, for that matter) voices were being heard internally, there would likely be no need for these comments to be made public.
And that’s largely due to the fact that there’d already be a contract extension in place.
As Sportsnet’s Iain MacIntyre put it: maybe the owners should ask current players what they think before deciding on personnel decisions.
As has been reported previously, Jim Benning and the hockey ops department all want Clark — who notched his 1500th NHL game just last week — to return, and now you can officially add Demko to that list.
And who could blame him?
“If Ian doesn’t come back, it doesn’t automatically mean that Thatcher is going to regress significantly, or that he can’t continue to grow, but there are enough examples of guys taking steps back after they move on from Ian,” said Kevin Woodley of InGoal Magazine. “When you see the progress made, when you listen to Thatcher talk about the specifics, and the way that they are able to think the game together and grow together, and how lockstep they seem to be on his development path… Why on earth would you take a risk of changing that up when you’re about to head into a five-year contract with this guy? Why would you risk finding out how vital Ian Clark is to that success, especially when you see the impact he’s had on other goalies?”
“Whether you believe the risk is significant or slight, there’s no need to take it here. It’s just a matter of paying the man.”
Allowing Clark to walk is a risky gamble both in the short and long term, and for a team whose current roster construction relies heavily on getting lights out goaltending, playing with fire at the goaltending position seems like an incredibly ill-advised decision at this juncture.
And before you say people are overreacting to Demko’s comments:
“I’ve had two goalie coaches text me basically saying they can’t remember any goalie coming out that strong with those kinds of statements,” added Woodley. “People aren’t exaggerating when they point out how rare this is for a guy to come out that strong.”
Demko made his statements. Will ownership listen to what their franchise goaltender had to say? The ball is now in their court.
Uncategorized
Recent articles from David Quadrelli