Thatcher Demko is among the league’s worst goalies this season, and that’s a worst-case scenario for the Canucks 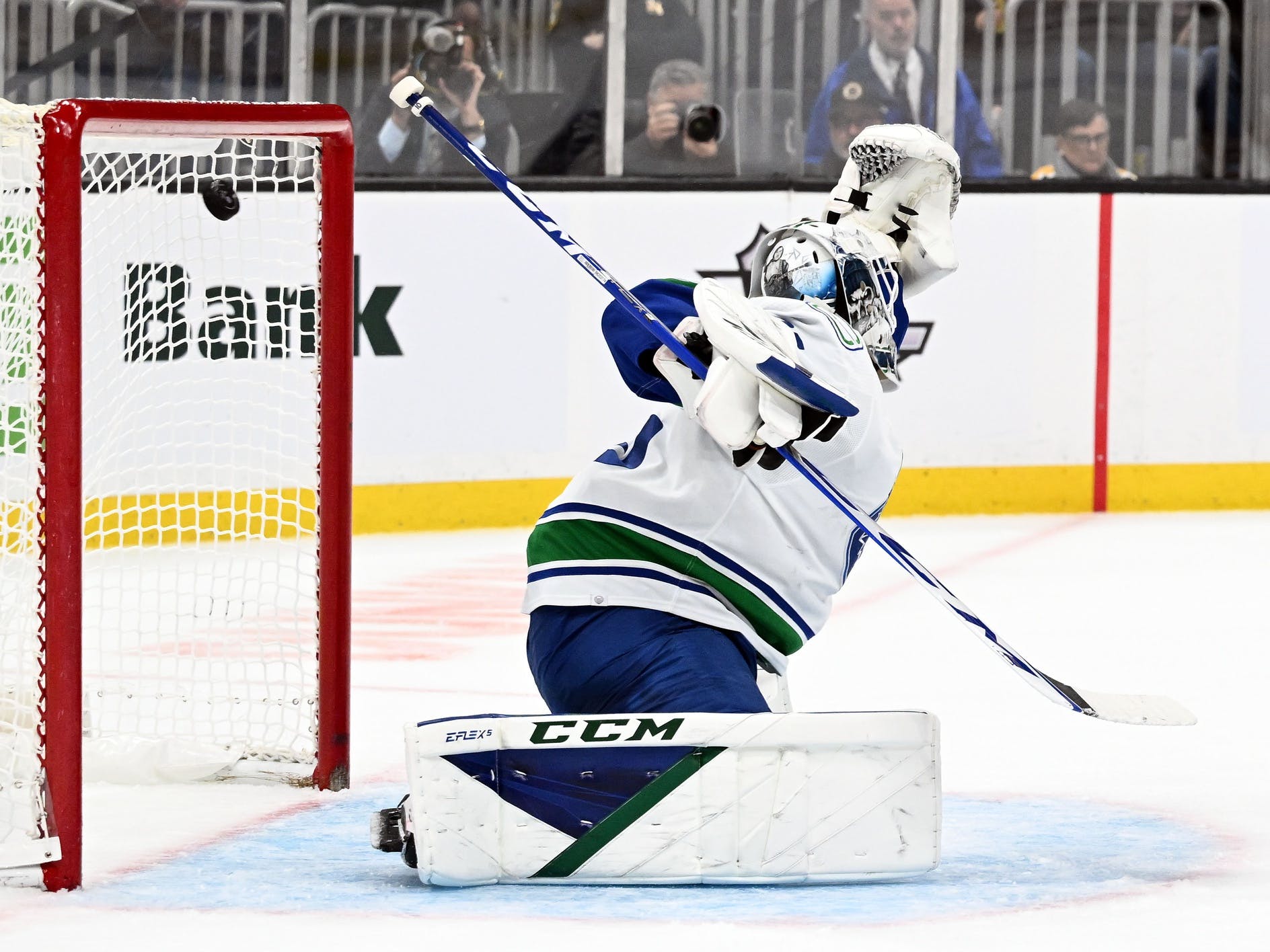 By Stephan Roget
2 months ago
Flash back to a point right back in the middle of the 2021/22 season.
Any point will do, really.
Had one, at the time, asked any casual viewer of the Vancouver Canucks which player was contributing most to the team’s (limited) success, the near-unanimous answer would have been Thatcher Demko.
Flash forward to the present day, and Demko is still a deciding factor in the Canucks’ rate of success in 2022/23…just not in the way that anyone was hoping for.
All were aware of the narrative floating last year that Demko was “stealing games” for the Canucks and “keeping them in” other games in which they had no right to be competitive. Heck, it was a hard line to argue against.
But what happens when a team relies that heavily on a player and that player just stops being reliable, seemingly out of nowhere?
What happens when the sole reason that one’s team is winning games starts actively losing games for the team instead?
That’s called a worst-case scenario, and it’s what the Canucks are experiencing right now with Demko.
Sunday afternoon’s matchup with the Boston Bruins was just the latest occasion in which Demko surrendered four goals or more. In fact, it’s become his standard of late. Don’t believe us? Just peep his current GAA of 4.02, fourth-worst among goalies to have played at least eight games thus far on the 2022/23 season.
And Demko’s stats appearing at or near the bottom of the column is going to be a running theme in this column.
His current save percentage sits at just .874, third-worst behind Elvis Merzlikins of the Columbus Blue Jackets and Jack Campbell of the Edmonton Oilers.
Even Merzlikins and Campbell, however, have arguably found greater success this season than Demko. His record of 1-8-2 is worst among all NHL starting goaltenders, and no regular goaltender has achieved fewer points on the year than Demko’s measly three.
Demko’s 44 goals against are the second-most in the entire league, trailing John Gibson’s 45 by just a single tally.
The situation looks even more dire once someone breaks out the fancy stats.
According to MoneyPuck, which tracks a goaltender’s performance against statistical expectations, Demko is definitively underperforming across the board. His “goals saved above expected” is actually a goals saved below expected of -10.3, which is a roundabout way of saying that Demko has let in approximately one extra goal per game than he should of so far.
Honestly, that actually sounds a little bit better than what fans have been seeing from Demko on the ice, but keep in mind that that -10.3 is, again, the second-worst xGSA in the NHL, trailing only Merzlikins.
A further breakdown of the numbers reveals a Demko that is not just not thriving, but one that is actively shortchanging his own team’s defence. Based on the difficulty of shots he faces, Demko should be rocking about a .946 save percentage on unblocked shots. Instead, his unblocked save percentage sits at just .929, a significant step down.
Demko’s expected GAA is at around 3.08, nearly a full goal on average below his actual GAA of 4.02.
Don’t get us wrong, the much-criticized blueline of the Canucks definitely bears some of the blame here, and they do burden their goalies with an undue amount of scoring chances in general and high-danger chances in particular. Even here, however, Demko is returning less than should be expected, with a .831 save percentage in high-danger scenarios.
Everywhere one looks, Demko is struggling. He’s giving up more rebounds per shot than expected. He’s got an expected puck freeze rate of -16.11, again among the worst in the league and yet another indicator of his lack of control.
Demko even comes up lacking in the “low-danger unblocked shot attempt save percentage” column, which is about the friendliest statistical column that a hockey goaltender is ever going to find.
The results, it could be said, speak for themselves, and they’re not saying very nice things. And that notion can be extended outward from Demko to the entire Vancouver Canucks franchise right now.
It would seem, on the one hand, a natural consequence of having relied too heavily on any one player, especially one playing such a notoriously up-and-down position. Everyone and their team dog could have told you that the Canucks leaned too much on Demko throughout 2021/22.
On the other hand, who could have really expected Demko to perform this poorly through the opening stages of 2022/23? To have the player contributing the most to wins suddenly start losing games singlehandedly is quite a swing for any organization to have to deal with. It’s an issue of the insurmountable variety, and it’s the largest single factor in the Canucks being in fourth-last place, as of this writing.
Several idle ponderers could be heard last year wondering something along the lines of “Where would the Canucks be without Thatcher Demko?”
Well, now we know the answer, and the answer is at the bottom of the standings, without much hope of ever climbing.
Few would have imagined it ever going down like this, and now it’s even harder to imagine anything less than the return of the old Demko being able to turn this season around.
Editorials
Recent articles from Stephan Roget