Holtby and Demko will need to continue to be difference makers for the Canucks, and they know that 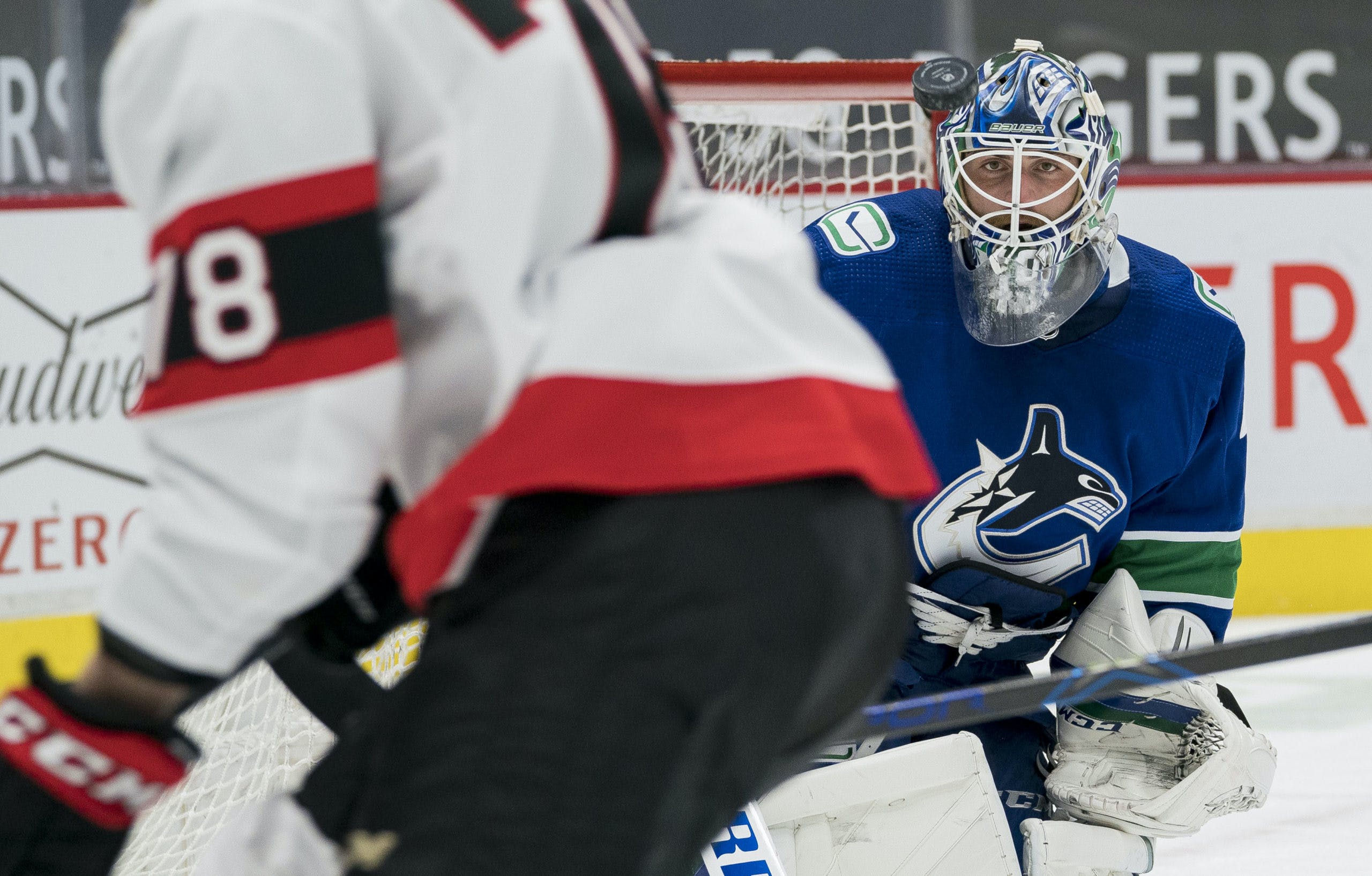 By David Quadrelli
1 year ago
Thirty-three.
That’s the number of high danger scoring chances the Vancouver Canucks allowed to get through to their goaltenders in their three-game series against the Montreal Canadiens.
For comparison, the Canucks generated nine against Carey Price and Jake Allen, five of which beat the Habs’ netminders.
The Canucks were having breakdowns all over the ice and playing some truly sloppy team defence in front of their goaltenders. This included turnovers, failed breakouts, and exceptionally poor in-zone defence.
This caused Braden Holtby and Thatcher Demko’s numbers to plummet, and while they were certainly doing their part in those losses where defence was almost non-existent, not getting the win just wasn’t good enough for them.
“Enough was enough for me,” said Thatcher Demko after his 35 save performance against Ottawa on Monday. “Three games and no wins, that’s tough, and I don’t want to be that guy. I want to be the guy that’s going to get wins when the team needs it.”
“Both of us felt the same way,” said Holtby when asked about the Demko quote Thursday night. “As a goaltender, you pride yourself on trying to be the difference-maker when it’s needed. Being a leader that way, and for myself in that last Montreal game, you look at the goals and maybe you’re nitpicking, but you’ve got to find a way to do it in order to lead your team when things aren’t going well. I think both of us, obviously Thatch with the last two games and how unbelievable he played, we both know that this season, it’s going to take both of us to be consistent and try to be the difference makers.”
The goalies did more than their fair share in lifting the Canucks to three straight victories, especially Demko during the two games he played in this series.
Even when the team in front of him appeared as though they weren’t going to show up on Wednesday night — where they allowed a franchise record-tying 24 shots on goal in the first period — Demko not only held, but dragged his team back into the fight.
To their credit, the team in front of them certainly played an all-around cleaner game than they did against Montreal, but how much of that was due to playing a much weaker Senators team remains to be seen.
Nonetheless, the Canucks will need their goaltenders to turn in some more stellar performances if they hope to finish this road trip above .500 and continue to climb the North Division standings.
“I think it was a three-game set that we needed in order to kind of reset, but at the same time, it’s over,” said Holtby after Thursday night’s victory. “Obviously, things went well for us in this three-game set, but this year one of the most important things is not getting too high or low, and we have to make sure we’re not too high on this three-game set because we’ve got a real tough road trip ahead of us. In order for us to have success, we need to have the right working mentality and go earn it.”
Despite all the outside noise after their well-documented stumble out of the gate to begin the new season, the Canucks didn’t allow themselves to get too low. Now, coming off three big wins against the basement dwellers of their division, they can’t get too high, either.
Uncategorized
Recent articles from David Quadrelli