With a sweep of the Ottawa Senators, the Vancouver Canucks could take full control of their playoff destiny 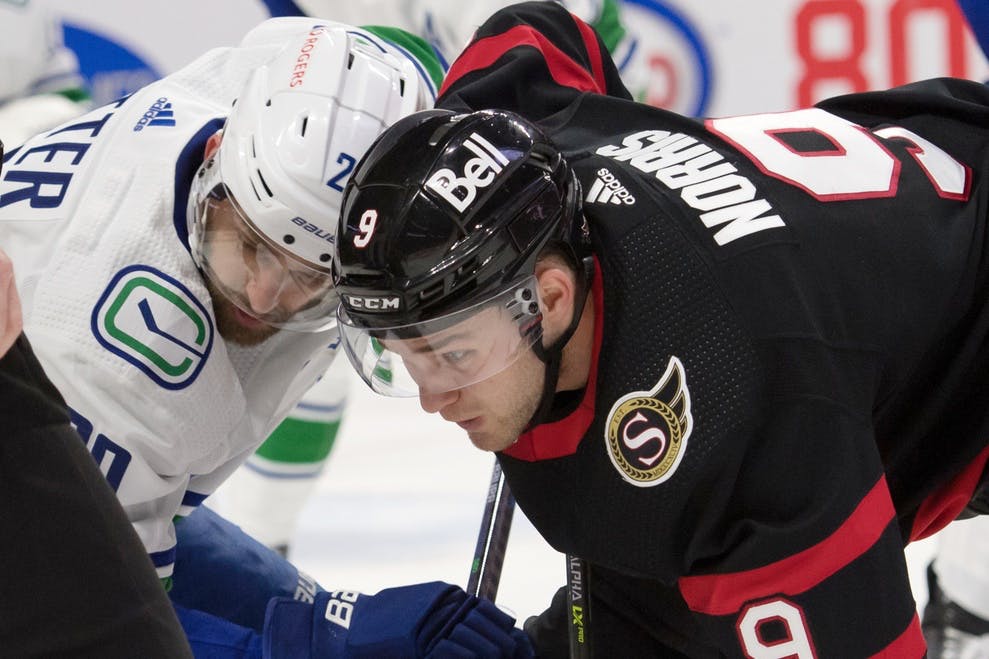 By Stephan Roget
1 year ago
When the Vancouver Canucks went on an extended hiatus while COVID-19 tore through their roster, there were plenty who thought the season was effectively over. Even when the NHL announced a condensed return-to-play plan that would include 19 games across 32 nights, there were more folks talking about how it might affect the Canucks’ draft position than any potential run to the playoffs — and perhaps reasonably so.
When the outbreak was announced on March 31, 2021, and games started to be cancelled, the Canucks sat in a tie for fifth place in the North Division with the Calgary Flames, each sporting an identical 16-18-3 record.
The Montreal Canadiens held down the fourth and final postseason spot in the division with a 15-8-9 record, four points up on the Canucks and Flames and with two games in hand.
It would seem a lot to overcome in just 19 games under ordinary circumstances, never mind after three weeks of what only Damien Cox could describe as “rest.”
But then a couple of funny things happened while the Canucks were on hiatus.
The Flames continued to lose, dropping three straight to open up April, rebounded with three straight wins, and then dropped two more, for a combined record of 3-5-0 on the month thus far.
The Canadiens floundered even harder amid their own condensed schedule, going 4-7-0 through the first three-quarters of April.
And then something even funnier happened: the Canucks returned and — against all odds, missing their top center, their starting goaltender, and several other key players — beat the division-dominating Toronto Maple Leafs twice in decisive fashion.
Now the situation looks drastically different, to say the very least.
As of this writing, and ahead of Wednesday night’s games, the North Division standings look like this:

From NHL.com
The Canucks sit just two points behind the Flames for fifth place, but hold a staggering six games in hand. When it comes to point-percentage, Vancouver is already ahead .500 to .456.
The Canucks are a full eight points behind the Canadiens for fourth, and they’ve only got four games in hand to work with there.
But, conveniently enough, those four games are about as “in hand” as unplayed games could reasonably be. That’s because the Canucks are about to embark on their final four-game series of the 2021 season with a quartet of games against the lowly Ottawa Senators.
Now, we’re not here to suggest that playing against the Senators constitutes guaranteed victory. The Sens do have the third-worst point-percentage in the entire league, but they’ve improved a little of late.
But Vancouver has gone five-and-0 against thus far in 2021, and they are coming off the high of a two-game coup against Toronto.
Even better, they’ve got some extra motivation in that completing the series sweep of the Senators places them in an enviable position — one in which their playoff destiny rests entirely in their own hands.
If the Canucks can win four straight against the Senators, they’ll move into an effective tie with the Canadiens for the fourth and final playoff spot in the North Division. Actually, if they can manage to win all four in regulation or overtime, they’ll grab the ROW tiebreaker, too, giving them sole possession of the spot.
Now, it’s important to keep in mind that the Canadiens will not be stationary during this time. While the Canucks are facing off against the Sens, the Habs will be skating in five games of their own, and that could obviously change how the standings appear.
But don’t be deceived, because the schedule has to even out by the end of all this.
If the Canucks do sweep the Senators, it becomes a direct horserace between them and the Canadiens. Whoever puts together the best record over the final 17 games of the season wins the last playoff spot, period. The other goes golfing — you know, whenever the golf courses open up again.
We’ll take the opportunity at this point to mention that the Canucks should absolutely be celebrated if they pull this off — even these past two wins against the Leafs have been enormous accomplishments — but they should not be denigrated if they do not.
Vancouver already finds itself playing under difficult circumstances, and it’s only going to get harder from here as the schedule condenses further and fatigue begins to pile up.
But at least now they have something to play for. Hockey has always been a sport driven by emotion, and there’s a lot to be said about an inciting incident that brings a team closer together and sets them up for an against-the-odds string of performances. Usually, it’s an on-ice brawl, but an off-ice slugfest with a deadly pandemic might just have had the same effect.
We’re not calling our shot quite yet here, but we are saying there’s a chance and — again, if the Canucks can sweep the Senators over the next week — it’s a chance that will rest entirely in the Canucks’ own hands.
Like we said, a spot in the 2021 Stanley Cup Playoffs is still far from a guarantee, but the Canucks have at least secured a fun ride through the stretch run either way, and what more could you really ask for?
Regardless of one’s opinion on the league and management’s handling of this recent crisis, we can all agree that the players themselves deserve to be cheered for — and now fans have something definitive and achievable to cheer them toward.
Uncategorized
Recent articles from Stephan Roget