The Statsies: Canucks loss vs. Seattle is just as bad analytically as it was visually 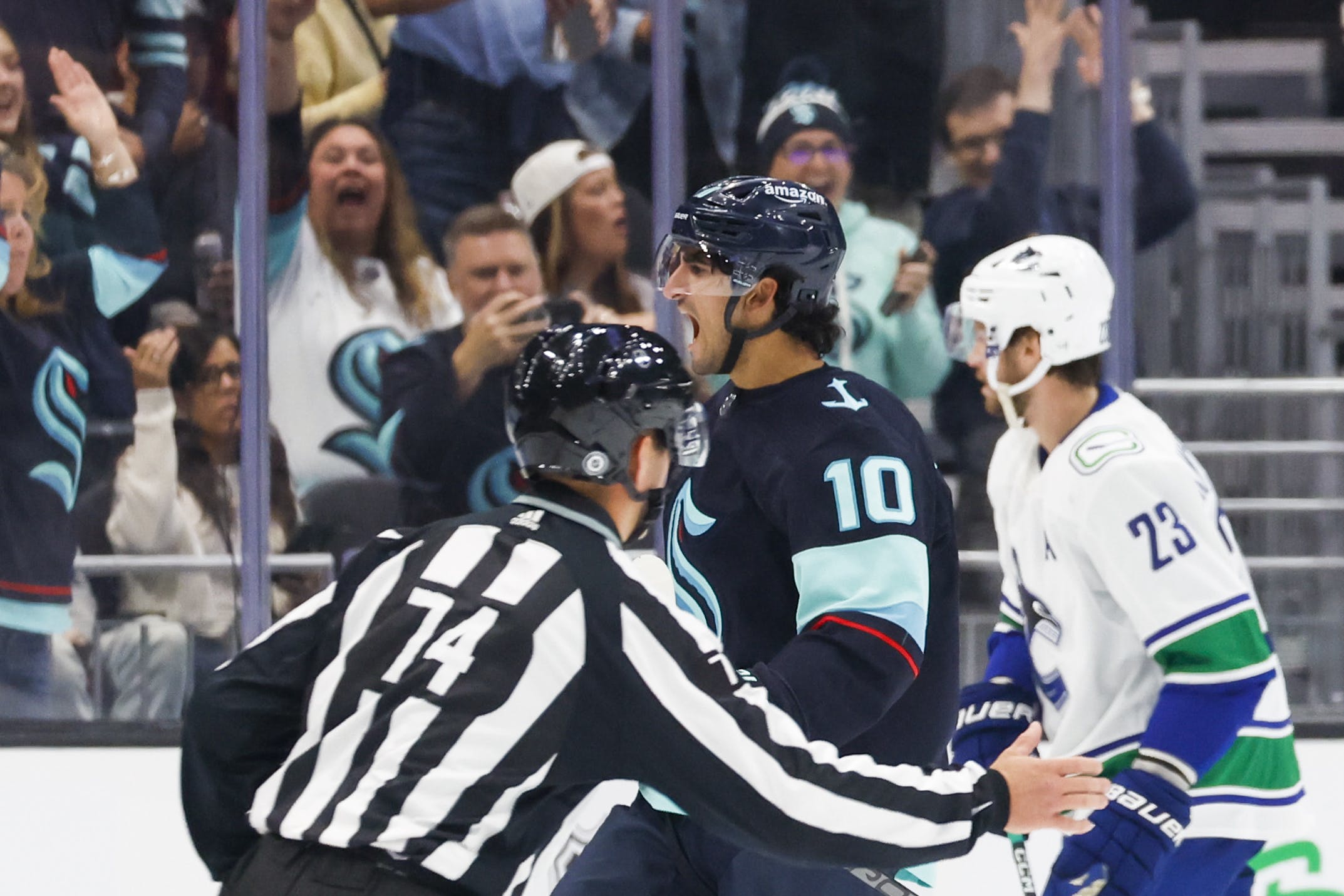 By Michael Liu
3 months ago
Oh boy.
There will be some that say “it’s not about you losing but how you lose” in the preseason. Well, the Canucks got dummied by the Kraken on Saturday. Seattle did dress pretty much their projected NHL roster, while the Canucks sat out the likes of Pettersson and Hughes, but Vancouver iced 5 out of 6 full-time NHL defencemen. Not ideal, to say the least, as they fall to 0-4 in the preseason.
Let’s break down the “how they lost” statistically in a 4-0 defeat to Seattle.
As mentioned, here is our glossary guide to the Statsies.

This is just not a good game flow chart. The Canucks were never in control of this game, with the Kraken completely dominating possession from beginning to end of the game. There was a little pushback about halfway into the second period, but that third period saw Seattle crank up their puck possession and the Canucks not doing anything about it.
Naturally, the expected goals followed the same trend. Seattle consistently out-chanced Vancouver and didn’t give that advantage up the entire game. The only time xG favoured the Canucks was at the very end of the second period, and it lasted for a minuscule amount of time. 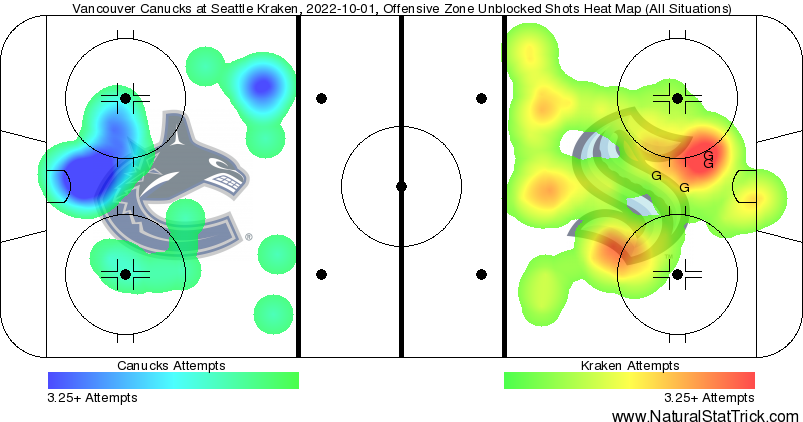 The heat map doesn’t get any better. Quite frankly, this is a death knell to give up this many high-danger chances right in front of the net. Every single one of the Kraken’s goals came from the right side of the slot in that glaring red spot, a place that the right defenceman should be covering. Unfortunately, that seemed to be missing all night as Seattle took advantage of their hot spot. It should also be concerning to the Canucks that they yielded three other spots where there were more than 3 attempts, with a healthy spread all over the defensive zone.

Corsi Champ: Our Corsi champ for this game is Tyler Myers, who might’ve been one of the only players that showed up for Vancouver tonight. The much-maligned defenceman led the team by a significant margin with a 62.50 CF%, a CF% rel of 31.85% showing just how much of an impact he had when he was on ice. Myers managed to generate 12 scoring chances, with 4 being high-danger while giving up just 2 against, a decent margin considering that the team was mostly buried in the xG department.
Corsi Chump: On the total flipside, Tucker Poolman earns the Corsi chump moniker to absolutely no one’s surprise. Poolman had a rough game, finishing with a 24.24 CF% with a CF% rel of -26.58%. That essentially means that he contributed almost as much negatively as Myers contributed positively to possession. Poolman finished third-last on the team in xGF% with a 16.28%, as well as conceding 4 high-danger chances against.
Oh, this sort of thing also doesn’t help with Poolman’s perception.
xGF: This game’s winner is Dakota Joshua. It’s not a high bar to clear, but the projected bottom-sixer was all over the ice tonight making his presence felt. Joshua posted an xGF% of 79.74%, giving him a xGF% rel of 56.15%, which is about 16 percentage points clear of second place. He tied for second in HDCF with 6 while yielding no HDCA on his own end. Talk about playing a two-way game. Strong and physical, Joshua looks to be a good addition to give some grit to this lineup.
GSAx: For the first time this preseason, a Canucks netminder finished an entire game. Unfortunately, Thatcher Demko was left out to dry by his team early and often. His goals saved above expected did suffer thanks to it, but props to the netminder for just staving off that first period. Demko’s expected goals against came in at 2.17, and since he conceded 3, it leaves him with a GSAx of -0.83. That would’ve had him snugly in 17th last year, which isn’t bad all things considered. Of course, Demko has higher standards for himself, and the Canucks also do need him to be a bit better if they want to make the playoffs this season.

Budding fourth line: The biggest highlight of this game for Canucks fans would probably be the line of Dakota Joshua – Jason Dickinson – Curtis Lazar. These players finished in the top four of the team’s xGF%, as well as leading the team with 0 HDCA. Altogether, the Joshua-Dickinson-Lazar line put up a CF% of 58.55%, easily making them the most effective line possession-wise for the Canucks. Their combined xGF% was 76.42%, and a 73.82% high danger chances for relative to their own team makes them an interesting combination to watch going forth.
Luke Schenn’s bounceback: I was quite tough on Schenn in the very first Statsies, and it appears that the veteran defenceman decided to make me eat my words. Tonight was a very good outing for Schenn as he generated the most high-danger chances for on this team with 7. He did still eat it with a CF% of 36.67%, but the relative comparison of -7.08% suggests that he wasn’t a detriment to an already possession-suffering team. Otherwise, another highlight of Schenn’s night was an impressive 60.00% xGF%, which is quite something from a defenceman not exactly known for offensive production.
Wolanin wooing for a spot: The one defenceman that played against the Kraken who didn’t feature regularly last season was one of the brighter spots. Christian Wolanin quietly put together a solid game, breaking nearly even on CF% rel (-2.03%) and finishing third in xGF% (65.03%). He looked dynamic and moved the puck well, not to mention playing his part on the defensive end. Wolanin broke even on his scoring chances for and against, while managing to be part of 4 high-danger chances for and giving up 2 against. It’s a strong audition for that 7th defence slot, a roster spot that’s probably going to come down to him or Kyle Burroughs at this rate.

CF% – 41.49% HDCF% – 52.63% xGF% – 35.24%
The Vancouver Canucks did not have possession of the puck much but managed to get a couple of good opportunities to score. However, they did not have anywhere close to good shot selection and it showed in the fact that they got shut out. They’ll look to record their first win of the preseason against the Edmonton Oilers on Monday at Rogers Place.
Stats provided by naturalstattrick.com
Editorials
Recent articles from Michael Liu