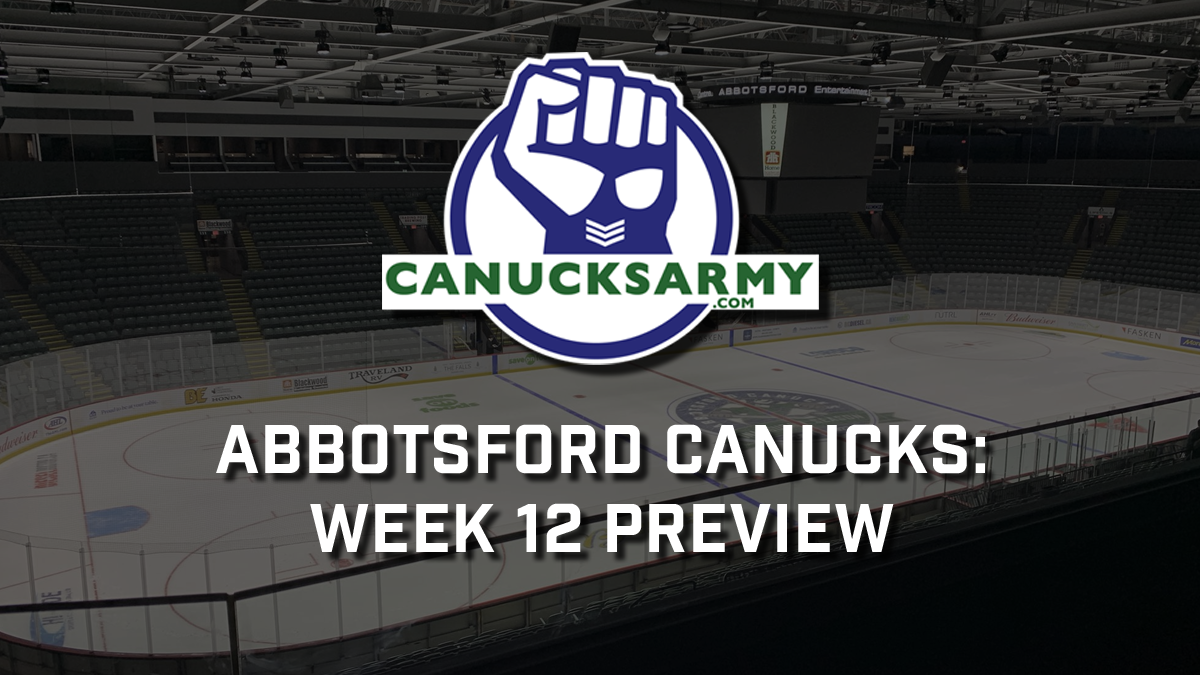 By Cody Severtson
1 month ago
After a lengthy eight-day holiday break, the Abbotsford Canucks return to close out 2022 with a double header against the Manitoba Moose.
Through 2022, the Farm’s schedule was pretty light and favourable. Starting with this Friday/Saturday set, the Abbotsford Canucks enter the new year schedule with six games played over nine days. Before the AHL’s holiday break on December 23rd, the Abbotsford Canucks’ previous six games took place over sixteen days!
Following the News Year’s Eve clash with the Meese, the Farm heads to Calgary for a 2-in-3 set against the Wranglers starting Monday. Then the Farm is back home for another weekend double header against the Henderson Silver Knights.
Before we preview the series against the Meese, let’s see how we did with our week 11 predictions!

It’s impossible not to bet against the home team for this doubleheader series. Factoring how dominant they’ve been at home with the midnight addition of Nils Höglander to the roster, the Abbotsford Canucks should earn three out of four points, at minimum.

He doesn’t miss baybee!
Across two games, the Canucks outscored the Barracuda 12-5. The game was relatively close at 5v5, with Abbotsford outscoring the Barracuda 6-3 despite being outshot 44-36.
Fortunately, the Farm’s special teams rebounded in a big way, with their power play scoring 3 goals on eight opportunities. At the same time, their PK conceded just one goal over eight San Jose power play opportunities.
Additionally, the Wednesday win against San Jose improved Abbotsford’s overall record in the second game of back-to-backs to 4-3-0-1.

This past decade, the Vancouver Canucks have seen far too many players sidelined by head injuries. Travis Dermott, Micheal Ferland, Sven Bärtschi, and Tucker Poolman, to name a few.
Dermott looked fresh, fast, and poised with the puck in Abbotsford’s Tuesday nighter against San Jose, logging a boatload of minutes without issue.
A player missing three months due to lingering issues relating to head trauma and returning to the NHL almost immediately following a conditioning stint? We love to see it, folks!

The Canucks’ first meeting with the Manitoba Moose was a tale of inverse performances. The Farm recorded their only shutout of the season in game one with a 7-0 victory at home. Then, in game two, the Farm failed to build on their five-game win streak, losing to the Moose in a tightly contested 2-1 defeat.
Since their last meeting, Abbotsford has compiled a 4-2-0-0 record, outscoring opponents 20-14 despite being shut out once. Manitoba’s offence has run a smidge hotter, compiling a 5-1-0-0 record while outscoring opponents 24-14.
The matchup with the Meese maintains a recent opponent commonality for Canucks’ opponents: incredibly strong penalty killing.
The San Jose Barracuda held the 8th-best PK in the AHL ahead of their matchup.
Despite being bottomfeeders of the Pacific Division, the Henderson Silver Knights held the 2nd-best PK in the AHL ahead of their matchup, and the San Diego Gulls managed a league-average PK.
The Manitoba Moose hold the 4th-best PK in the AHL ahead of their weekend set. Additionally, the Moose have the 7th-best power play. Bad news for the Farm’s 29th-ranked penalty kill and 10th-ranked power play!

Fortunately, the Abbotsford Canucks have maintained their position at the top of the shot-suppression charts. Ranking 2nd in the AHL, the Abbotsford Canucks concede less than 28 shots per game. On the other hand, the Moose are conceding the 10th-highest shots per game, over 31 per game.
Unlike the Moose, the Canucks simply haven’t had credible goaltending that benefits their strong defensive play. Through 27 games, the Canucks‘ goaltending battalion has provided an average save percentage of 0.888, the 7th-worst in the AHL. Through 26 games, the Moose’ goaltending battalion has provided an average save percentage of 0.908, the 8th-best in the AHL.
With Collin Delia likely providing spot duty for Vancouver until February, the Farm will need to ration Arturs Silovs starts through the start of the new year. PTO backup Jake Kupsky wasn’t great during his AHL debut. Though the Abbotsford Canucks laid an egg on offence, getting shut out for the first time all season, Kupsky allowed 3 goals on just 15 shots.
The Farm has built a decent cushion in the Pacific Division playoff race. Currently, Abbotsford sits in 4th place by points and points percentage. Ahead of them are the 3rd-place Colorado Eagles, who have 38 points in 29 games, a 0.655 points percentage. Below the Farm is the Ontario Reign, whose 31 points in 26 games place them 6th in the Division by points and 5th in the Division by points percentage.

These non-divisional games are great for Abbotsford to build their padding in the Pacific Division playoff race. While it’s not critical for Abbotsford to win both games, the padding would be nice ahead of their busy and brutal January schedule.
Besides, they’ll have even more chances to pad their record against non-divisional opponents. After this weekend, Abbotsford still has another four games against the Meese on the season’s docket!
We predict the team will come out strong after their long layoff to win the Friday game. However, the quick turnaround and the potential back-to-back starts for Arturs Silovs will result in another disappointing ho-hum loss on New Year’s Eve.
Editorials
Recent articles from Cody Severtson