By Cody Severtson
20 days ago
Alright Canucks fans, how about a dose of positivity for a change?
The Abbotsford Canucks are on FIRE to start the new year! Though they were shut out for just the second time this season in their rematch against the Calgary Wranglers, the Farm finished their four-in-six week with a 3-1-0-0 record, outscoring opponents 11-9.
Christian Wolanin led the Farm last week with 5 points total, 4 of which came at 5v5, followed closely by Danila Klimovich and Nils Aman, who tied with 4 points, 2 goals and 2 assists each! Linus Karlsson led the team with 13 shots on net across all situations, while Phil Di Giuseppe led the team with 11 shots on net at 5v5.
Local boy Arshdeep Bains had an impressive week 13 as well. Through four games, the Farm outscored opponents 5-1 with Bains on the ice at 5v5. He finished the week tied with Klimovich for the second-most 5v5 points, with 1 goal and 2 assists. 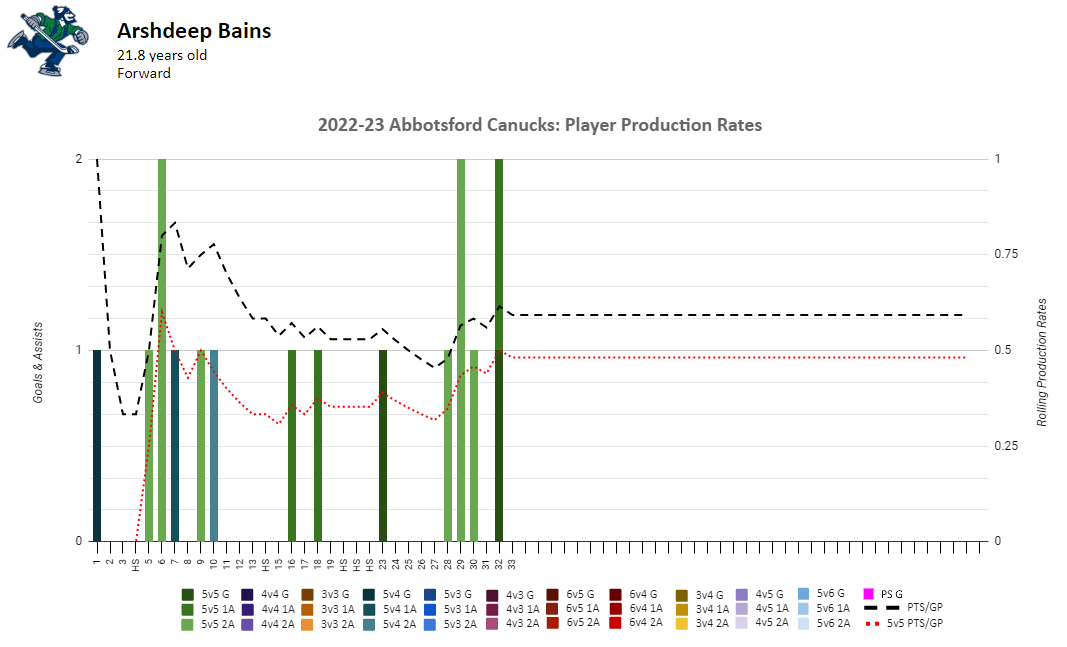 Bains has had a solid rookie debut in the AHL. Despite spending most of his ice time in a limited fourth-line role, his points production rate is higher than Tristen Nielsen and Kyle Rau, who see more minutes with more experienced linemates while earning significant reps on the power play units. Bains’ strong play of late has earned him a spot on the team’s penalty kill, typically as the first or second forward shift. Klimovich’s strong two-way performance led to his return to the team’s power play unit. Bains’ equally impressive defensive play and skills as a setup man should also earn him power play reps in the near future, provided his production at 5v5 continues the way it has.
The Vancouver Canucks AHL team struggled over the last decade to produce regular NHL contributors. Under Jeremy Colliton and the overhauled development staff, the early results on the Farm are very encouraging. Klimovich went from a routine healthy scratch to one of their best players over two months. Arshdeep Bains went from a routine healthy scratch to a key 5v5 contributor and regular penalty-killing forward as a rookie. Linus Karlsson started hot, cooled off, then rebounded as one of the Farm’s best all-around contributors at 5v5, the power play, and the penalty kill.
The production has not quite come for players like Nils Höglander or Vasily Podkolzin. But it’s hard to imagine that their production won’t explode as they acclimate to the AHL environment while under Colliton’s tutelage.
The vibes are good on the Farm, and they’ll look to continue their winning ways when they visit the San Jose Barracuda for a Saturday/Sunday doubleheader.
But first, let’s see how we did with our week 13 predictions!

They’re overdue for another week of weird results. Add in the likelihood of Arturs Silovs playing all four games with their busiest stretch to date. Baby, you’ve got a weird result stew going! Therefore, we predict 4 points against the Calgary Wranglers and a single point against the Henderson Silver Knights on home ice.

We predicted some weird results that proved mostly true from a certain point of view!
The Farm put up two impressive games against the Calgary Wranglers, even if they were shut out in one of those games.
In both games against the lowly Henderson Silver Knights, the Farm gave up the opening goal in the first period and had to claw their way back to secure their two wins.
The six points in four games pushed Abbotsford to seventh in the AHL by points percentage, with the sixth-best goalscoring rate in the league, ninth-best power play, and second-lowest rate of shots allowed per game.

Danila Klimovich jumping from holding a single point to the Farm’s third-leading scorer at 5v5 is quite a sight to behold.

Theoretically, this should be an easy road trip for the Canucks.
During their first two meetings, the Farm outscored the Barracuda 12-5 despite being outshot 56-49 across all situations.
Since their late December matchup, the Barracuda are second-last in the league by totals goals scored and dead-last in the league by goals scored per game. Their power play sits seventh-worst in the AHL, while their penalty kill sits below league average, 17th overall. Through 37 games played, San Jose is conceding the 10th-highest shots per game.
Against the Barracuda, the Canucks power play and penalty kill performed well above their season averages.
The long layoff will benefit the Farm’s starting goaltender Arturs Silovs most. Silovs started three of the team’s four games during their four-in-six week and has started seven of their last 10. The heavy workload sounds rough. However, the numerous starts have led to a dramatic improvement in his stats. Silovs has posted a save percentage above the league average in six of his last seven starts. Additionally, Silovs posted a goals against average (GAA) higher than 2.00 just once over his previous seven starts, dropping his season GAA from a 3.85 peak to 2.63. Silovs 23 starts are the most he’s had in a season since 2019-20 as a member of the OHL’s Barrie Colts.

As we said, the vibes on the Farm are very good right now!

With the NHL club in shambles, players will be playing to prove they’re worth keeping around beyond this season and for late-season call-up opportunities.
This should be an easy 2-0-0-0 weekend. No question.
Editorials
Recent articles from Cody Severtson