Stats, predictions, standings, and more ahead of Abbotsford Canucks double-header weekend at home 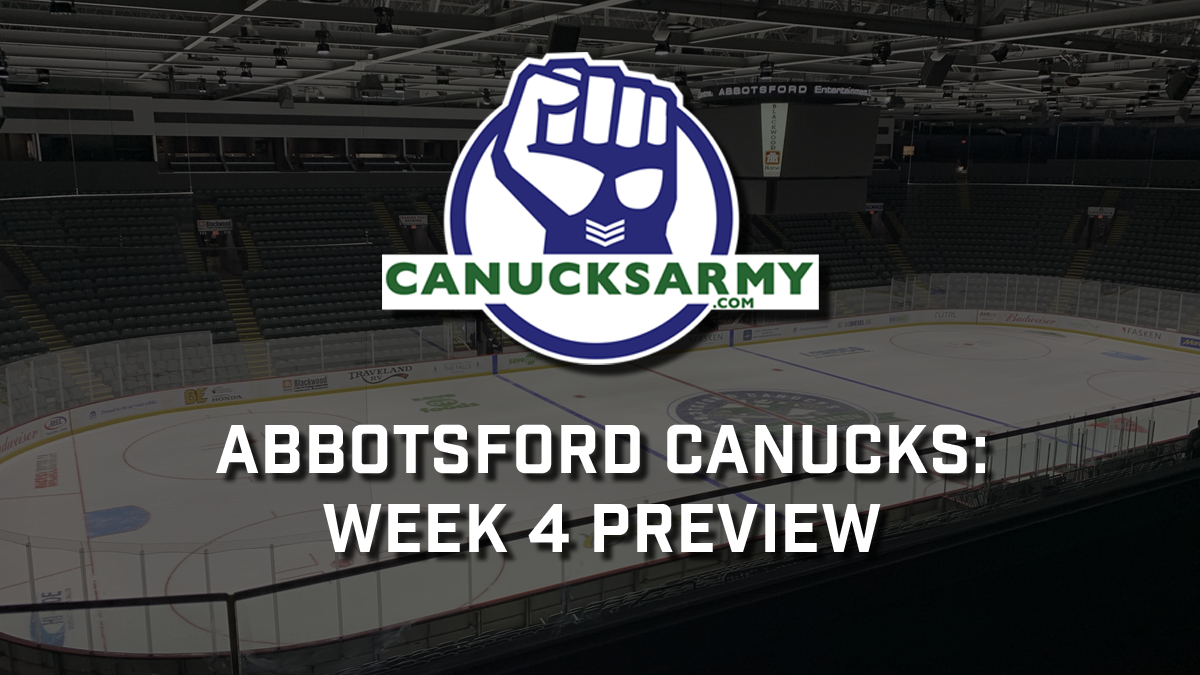 By Cody Severtson
1 month ago
After coming away with three points in their home debut last weekend against the San Diego Gulls, the Abbotsford Canucks return to the Abby centre for another weekend doubleheader. This time, the Farm closes out its four-game season series against the visiting Coachella Valley Firebirds!

The last time these two teams met, they split the series with a regulation win each.
In their first meeting, the Canucks leaned on their power play to overcome two one-goal deficits on their way to a 4-3 victory.
During the rematch, the exact opposite happened, with the Canucks failing to lean on their power play (2/8) on their way to blowing two one-goal leads in a 7-4 loss.
Friday’s game kicks off a sixteen-game road trip for the Firebirds that will see them playing ‘the visitor’ until December 18th, when their home arena is officially ready to open.
Leading the way for their respective teams are Sweden’s Jesper Froden, an undrafted 28-year-old right-winger, and Linus Karlsson, a 22-year-old right-winger.

Coachella Valley and Abbotsford’s leading scorers
The Firebirds lead the league in goals scored per game (fourth-highest goals scored total) but sit 22nd in most goals allowed. The Abbotsford Canucks currently sit with the 11th-best goals scored per game but sit tied dead-last in goals allowed per game.
Callum Booth leads Coachella Valley’s goalie trio with a 1.84 goals against average and a league-high save percentage of .950.
On the home side, Arturs Silovs and Collin Delia split goals against averages of 3.39 and 5.27, respectively. Their save percentages rank in the bottom half of the league, with Silovs rocking a .874 save percentage, and Delia, at .841.
Defensively, the Abbotsford Canucks haven’t been too hot at 5v5 or on special teams. Their power play ranks 19th best in the league, and their penalty kill ranks 24th. Despite their impressive goalscoring rates, the Firebirds enter Abbotsford with suboptimal special teams, with a 26th-ranked power play and a 29th-ranked penalty kill.
Most of the Firebirds’ offence has come at even strength, which is not good news for the Abbotsford Canucks, who’ve collectively struggled to maintain positive goal differentials at 5v5.

2022-23 Abbotsford Canucks: 5v5 Goal Differentials
Currently, just eight skaters hold a positive goal differential at 5v5, with Linus Karlsson leading the way, having been on the ice for half of the team’s total goals scored at 5v5, 6/12.
Brady Keeper currently leads the Farm with the unfortunate stat of being on the ice for the most goals scored against at 5v5, 7/16.
Chase Wouters, Marc Gatcomb, Michael Regush, and Vincent Arseneau have yet to be on the ice for a goal-for at 5v5, with Wouters having the worst goal differential on the team at negative-6.
The Firebirds are facing a daunting run of road trips from here until mid-December. They will likely come out hot against the Canucks to gain a significant points advantage over their Pacific Division rival.
While the Canucks are still neck and neck with the Firebirds, two losses to a division rival they will not face again this season could damage their hopes of hosting home playoff dates.

The Canucks will have a slight special teams advantage, so we anticipate a tightly contested series with Abbotsford coming out with at least three points out of a possible four.
Let us know your weekend predictions in the comments!
Editorials
News
Recent articles from Cody Severtson