The Stanley Cup Playoffs’ first round is busting the “anything can happen” myth, and the Vancouver Canucks are better off for it 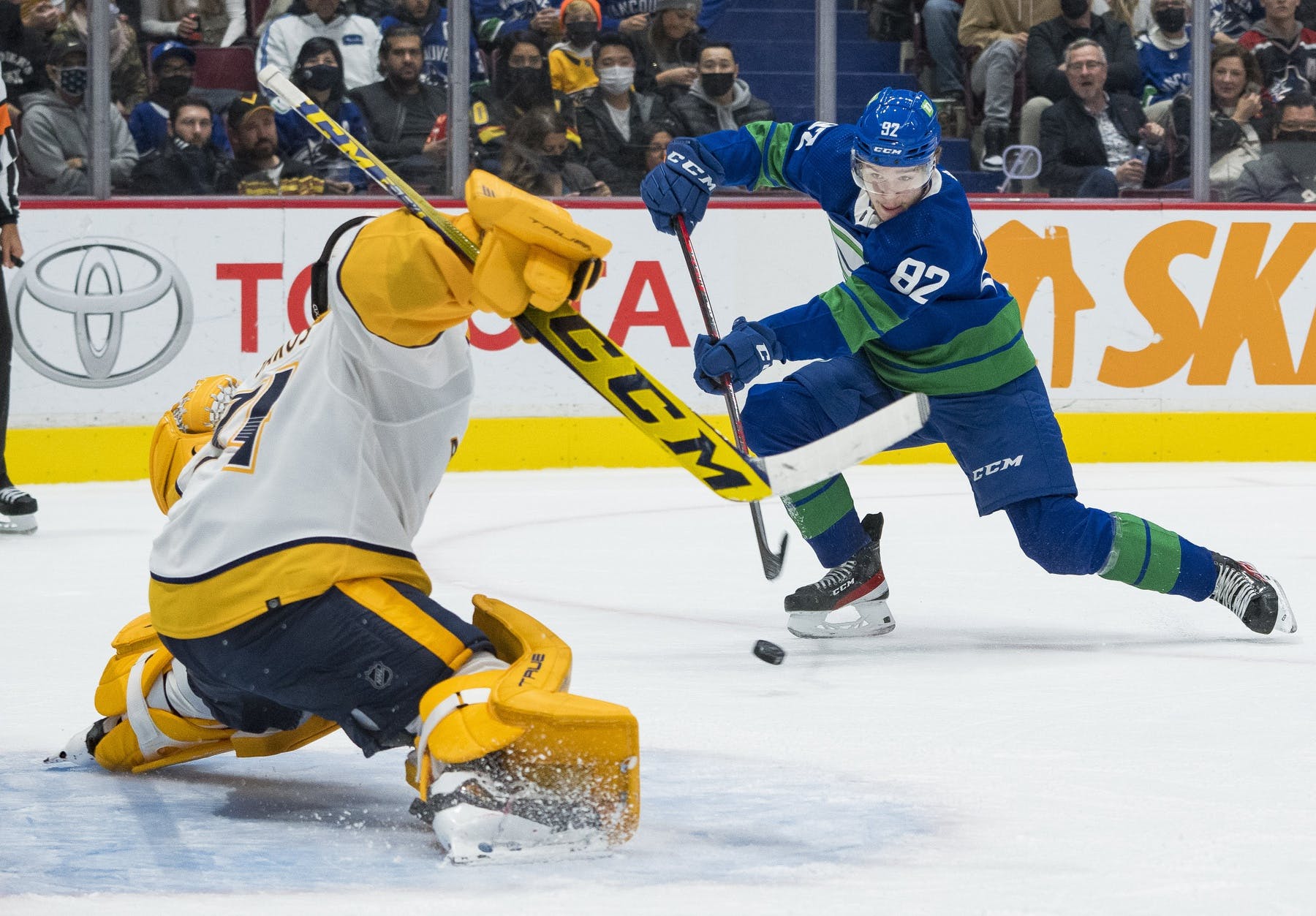 By Lachlan Irvine
8 months ago
When former Canucks general manager Jim Benning was asked about how he planned to navigate the 2021 offseason, his response included an all too familiar phrase.
“Once you make the playoffs, then anything can happen,” Benning said last May. “You look at teams that have won the cup and it’s taken time to where they’ve developed that confidence in, and winning a round or two sometimes, they have hard losses along the way, and it makes them stronger and more resilient the next year.”
In reality, “Get into the playoffs and anything can happen” is one of the great fallacies of the NHL ethos. Despite hockey’s higher luck element compared to other team sports, the best-of-seven playoff format is routinely able to separate the stronger constructed rosters from the teams who took shortcuts.
While an eighth seed or wild card team might make a surprisingly deep run once in a while, the ones that win the Cup are rarely a true example of lightning in a bottle. More often than not, those “Cinderella stories” are either a regular playoff contender who underperformed in the regular season, or a budding core whose Cup window is officially opening for an extended period.
As of right now, the Canucks fit neither of those categories. Even though Vancouver nearly pulled off an incredible run under new management to land a wild card spot, it’s worth asking if the end result would’ve been truly worth it. And you don’t have to look very far in the first round of this year’s playoffs to see why; just ask the team that took their place.
The Nashville Predators beat out Vancouver for the West’s last playoff spot in the final week of the season, only to get slaughtered by the Colorado Avalanche in a four-game sweep. While the Predators were missing their MVP in Vezina Trophy finalist Juuse Saros due to an ankle injury, Nashville’s nine goals during the series compared to Colorado’s 21 speaks for itself.
Perhaps somewhere in the Multiverse from Doctor Strange, it was the Canucks facing Colorado in the postseason’s opening round. But based on how Vancouver’s last couple weeks of the season played out, their fate could’ve been strikingly similar to Nashville’s.
When Saros was injured with just two games left in the Predators’ season, Nashville had to rely on a tandem of David Rittich and Connor Ingram in goal against the Avalanche. Had the Canucks taken their place, they would’ve done so with their own third-string goalie, Spencer Martin, stepping in for the injured Thatcher Demko and Jaroslav Halak.
To Ingram’s credit, the 25-year-old netminder did his best to hold off the juggernaut Colorado attack, including a 49 save performance in Game 2. But the Predators’ main flaw was fully exposed; without regular elite goaltending, Nashville was vastly overmatched against the more talented, deeper Avalanche roster.
The Dallas Stars, who also pushed the Canucks out of the playoff picture, are currently in a similar boat. Jake Oettinger has been exceptional over the first five games of the Stars’ series against the Calgary Flames, allowing just eight goals and posting a .956 save percentage. His teammates have scored the same amount in the entire series, including just two goals across Calgary’s three wins, and face elimination in Game 6 tonight.
Across the continent, the New York Rangers have attempted to accelerate their rebuild efforts for the sake of immediate playoff revenue. Depth pieces like Barclay Goodrow and Ryan Reaves were acquired and signed to hefty extensions, and multiple draft picks were moved to add immediate help like Tyler Motte, Andrew Copp, and Frank Vatrano at the trade deadline.
The result was an impressive 110-point season, but one that’s currently teetering on the edge of a first-round playoff exit. The Penguins have had little trouble solving Hart Trophy finalist Igor Shesterkin throughout all five games, and the Rangers’ overreliance on him and their top-heavy scoring attack has proven costly.
Had the Canucks continued on the path Benning had been taking them, the results would’ve been similarly underwhelming. While there’s no doubt that the intensity of playoff hockey can offer valuable experience to a young team, four to seven games against a much deeper roster can’t turn them into one without a full roster of equal talent.
Under the Canucks’ new front office, the “anything can happen” mentality appears to have been replaced by more concrete championship expectations. And if some of the playoffs’ biggest struggling competitors are any indication, that change in philosophy couldn’t come fast enough.
Uncategorized
Recent articles from Lachlan Irvine