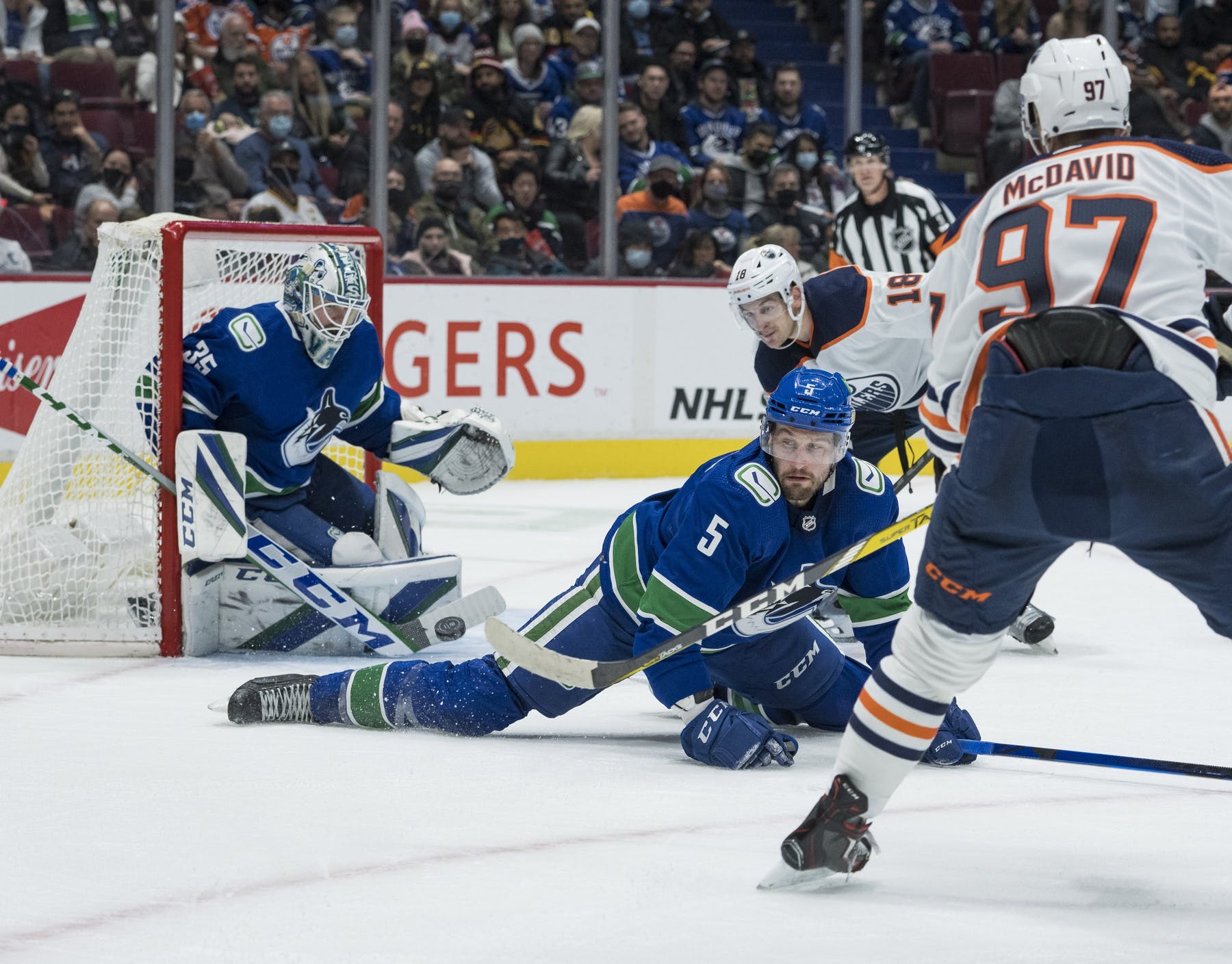 By Stephan Roget
1 year ago
That the Vancouver Canucks have major problems on the penalty kill is not really a debatable statement. As of this writing, they sit at a paltry 65% — that’s below a C+ on the British Columbian grading scale — and with the second-worst shorthanded record in the league. Only the Winnipeg Jets and their pungent 63.9% PK prevent the Canucks from being in 32nd place.
Call it pathetic, call it a joke, call it a disgrace. Any way you slice it, the Canucks’ PK absolutely sucks right now.
The reasons as to why that is, however, are a little less obvious.
Some will blame coaching, some will blame roster construction, and some will blame the performances of the players themselves. The wisest will blame some combination of all of the above.
But if we want to get scientific about it, there’s a convenient control group available through which to study the impact of joining the Vancouver penalty-killing unit.
Several of the Canucks’ PKers — Tyler Myers, JT Miller, Travis Hamonic, and the like — have been around the block before. But four new additions to the team — Oliver Ekman-Larsson, Jason Dickinson, Tucker Poolman, and Juho Lammikko — skated regular shorthanded shifts for four other teams last season, and are now doing the same for Vancouver.
That’s our control group. And what their shorthanded numbers thus far say about the state of the Canucks’ penalty kill isn’t pretty.

OEL was not a first unit PKer in Arizona, but he was an effective one, cleaning up against secondary power plays and only rarely letting in a goal against. His shorthanded assignment has increased by about 50 seconds a night in Vancouver, but even that can’t account for his sudden porousness. Through 12 games, Ekman-Larsson has already cleared a third of his shorthanded minutes from 2021, but he’s also already let in as many power play goals against as he did through 46 games in 2021.
He’s getting scored on at nearly three times the per-minute rate.

Dickinson is killing penalties in Vancouver with about the same frequency as he did in Dallas; with the cause of his extra 36 seconds a night being that the current Canucks take more penalties that the Stars did last season. But, as with OEL, Dickinson’s shorthanded efficiency doesn’t seem to have followed him to BC.
Ten games into his season, Dickinson has already been on the ice for seven power play goals against. Last year, he played 51 games and only had 11 power play goals against. His per-60 rate has more than doubled since joining the Canucks.

No player’s comparative stats show more of the negative impact of joining the Canucks’ PK than those belonging to Poolman. Though both Derek Forbort and Dylan DeMelo played more shorthanded minutes than him, Poolman was easily the Jets’ most efficient penalty killer, letting in about one power play goal against every ten games.
Now, in 2021/22, Poolman has nearly doubled his amount of PP goals against in less than half the shorthanded time and about a quarter as many games. His per-60 rate of power play goals against has nearly QUADRUPLED. That can’t all be on Poolman’s shoulders. It simply can’t.

Lammikko is a particularly interesting case study because, if we’re being totally honest here, he wasn’t that effective of a penalty killer in Florida last year, either. Lammikko was a fine second unit option, but he still bled power play goals against as a Panther, and he continues to in Vancouver. But even Lammikko’s numbers look worse by comparison. He’s letting in an extra two goals for every shorthanded 60 minutes as a Canuck.

There should be little doubt, in looking at these numbers, that the problems with the Canucks’ penalty kill run deep, and that they are, indeed, problems with the penalty kill itself — and not the players staffing it.
One can be a coincidence, but four is a conspiracy. Or, in more specific terms, one player coming to Vancouver and suddenly performing much worse on the penalty kill could be the fault of the player, but four players doing so simultaneously is definitely the fault of the team.
Parsing out the blame beyond that can get a bit complicated.
Quality of teammates plays a role. It could be, and probably is, that the other players these four are killing penalties alongside are simply not as good at killing penalties as their old teammates were. That factor is obviously on management.
It could be that these players are being asked to do too much. Each of the four is spending far more shorthanded time on the ice than they did with their previous team and some, like OEL, have definitely advanced up the ranks of PK responsibility. That one’s a little bit on coaching, and a little bit on management for not providing the coaches with more options.
But those per-60 stats are absolutely damning, and they’re a sign of something rotten within the team’s shorthanded system. There’s simply no other way to account for four penalty killers arriving in Vancouver and suddenly letting in power play goals against at double, triple, or even quadruple their previous rate. That has to be attributed, at least in part, to the way in which coach Travis Green and his staff have their players kill penalties.
If the issue wasn’t systems-based, we just wouldn’t see such a consistent downward statistical trend for the new arrivals.
As for what to do about that, we’re at a bit of a loss. But, clearly, something needs to change. The penalty killers that the Canucks have assembled have proven in the past that they’re capable of killing more penalties than this — just not in Vancouver, so far.
Uncategorized
Recent articles from Stephan Roget