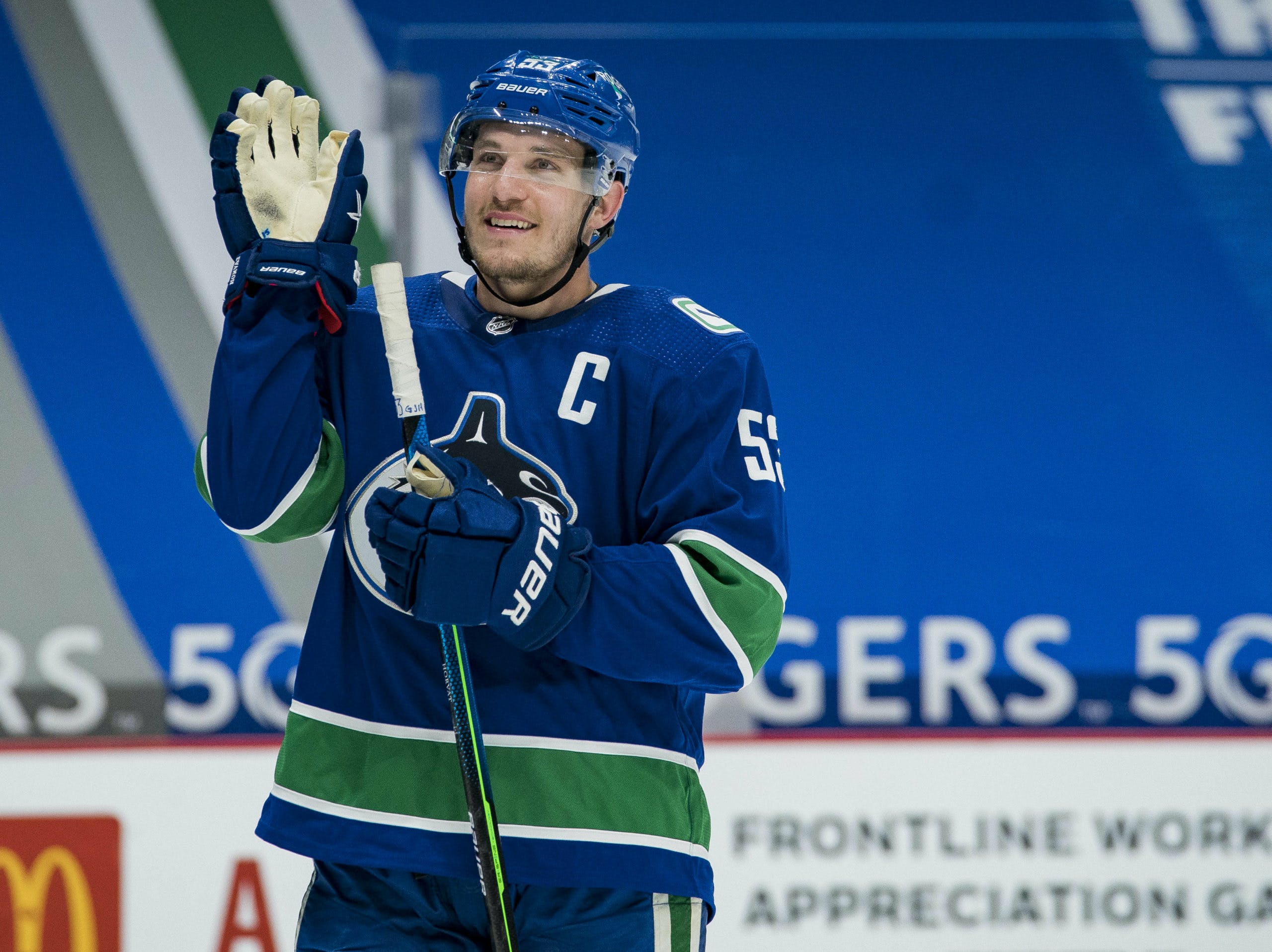 By Faber
1 year ago
The Vancouver Canucks’ second power play was horrible last year but will be much better this season with their new added scoring depth and the addition of a power play quarterback at the point.
J.T. Miller and Quinn Hughes were fundamental to last season’s first power play unit. When those two were on the ice, the second power play unit struggled immensely. The second unit scored two goals and allowed two goals against last season.
That’s just brutal for a power play group.
This season, the group is set to be much more dangerous but it will take a shake-up from the first unit to really give the second unit a chance to be great. The first unit from last season currently has three centres. Miller, Bo Horvat and Elias Pettersson have all been essential to the first unit for the past two years.
Over that timeframe, Horvat has the most goals, Miller has the most points, and Pettersson has the most shot attempts.
All three help the power play unit in different ways but one should drop down to the second unit to help create balance and give the unit a bonafide centre with a scoring touch. Both units can now thrive with the addition of scoring depth in Connor Garland, Oliver Ekman-Larsson, and Jack Rathbone.
After looking at some simple numbers, even though Horvat has the most goals, he’s my pick to drop down to the second unit.
Since joining the Canucks, J.T. Miller’s power play point totals are astonishingly higher than the other top players on the team.

His 43 power play points are 15 ahead of Brock Boeser and Pettersson over a two-year span.
The number that really sealed the deal for me was primary assists. Horvat only has one of those over the past two seasons.
He is a great shooter in the bumper position and the Canucks love that passing play down low that ends on his stick in the slot. That play will be the bread and butter to the second unit as Horvat jumps down to lead that unit in scoring.
The player coming up with this swap is Connor Garland. The newcomer possesses great offensive skills and is quick to jump on loose pucks in the corners. He jumps right into Horvat’s bumper position. Instead of just sitting in the bumper position, Garland will be moving around more than we have seen in the past.

Garland and Miller can rotate with each other to create a one-timer option for each half-wall player. Garland’s right-shot will be a bumper one-timer for Pettersson and Miller’s left-shot will be there for Boeser.
The result of these two players’ rotation is a forced movement technique that creates mandatory rotation in a power play that felt stagnant last year.
Let’s get to the second unit now. We have established that Horvat will be with this group and joining him will be Rathbone, Ekman-Larsson, Nils Höglander and Tanner Pearson.
If Jack Rathbone is on the Canucks’ opening night roster, he should be on the second power play unit. Having two defencemen will help defend against shorthanded goals and Rathbone has shown enough offensive skill that he can be used on the right half-wall on a power play. Rathbone has always had a good-looking slap shot on one-timers and it looks like he worked on it this offseason because it has more pop on it early this year.
The addition of Horvat to the second unit gives the group much more shooting options. The bumper play to Horvat will definitely get a lot of attempts. Rathbone receiving one-timer shots is another option. Ekman-Larsson firing from the point with Pearson in front of the net is sure to happen a lot. Finally, and potentially most importantly, giving Höglander the puck as the playmaker on the power play opens up a variety of quick shot options.
Höglander working the left-side half-wall give a one-timer option for Horvat in the bumper, OEL at the point, and Rathbone across the zone. Last season Höglander was second on the Canucks in even-strength scoring but only had one power play point in his role with the second unit last season. It’s clear that Höglander can put up points, he did it at even-strength last season. If he is given more responsibility on the second unit, he will show well.
Here’s how we would like to see a potential rotation with Höglander possessing the puck and bringing it down low to create even more scoring threats.

If Höglander works his way down towards the end line, he can look to shoot or pass to one of Pearson or Horvat along with a safety valve of Ekman-Larsson or a risky pass across to Rathbone.
The big difference and reason that we are including movement in these power play breakdowns is because that it felt weak on the Canucks’ 2020-21 power plays. When you watch some of the best power plays in the league like the Edmonton Oilers or Tampa Bay Lightning, you see how much movement and rotation they are constantly doing. The Canucks have the pieces to now have two extremely strong power play units. It’s not a stretch to say that they can have a top-five power play with the scoring personnel that they currently possess.
If the Canucks choose to keep Miller, Horvat and Pettersson on their first unit, they are basically saying that that group will play the first 100 seconds of every power play. With all three of those centres playing on the first unit, the next best option to take faceoffs on the second unit would be Jason Dickinson or Justin Dowling. Those are great power play pieces. It’s possible that they simply don’t use a centre because you don’t often ice the puck on the power play and if a faceoff does present itself, you can bring out one of Horvat or Miller for the draw.
The two groups that were presented feel like the best-balanced units that look dangerous enough to score on every man-advantage.
With their top-end talent, the Canucks should be one of the best power play units in the league. Jason King is taking over the coaching for the power play and we have heard that he is with the mindset of having a more balanced look through his two units.
The preseason hasn’t exactly given us an indication of how the man-advantage groups shape out. We will learn more from Thursday and Saturday’s preseason games when Pettersson and Hughes return to the lineup.
Thursday and Saturday against the Oilers ought to be as close to an opening night roster as we will see.
The personnel on the two units later this week will set the tempo for the season ahead and there should be high hopes for the power play group this season.
Uncategorized
Recent articles from Faber