By Cody Severtson
8 months ago

The Abbotsford Canucks first postseason run is over only 48-hours after it began.
Despite the insertion of Vasily Podkolzin, Nic Petan, Sheldon Dries, and Spencer Martin into Abbotsford’s starting playoff roster, the Bakersfield Condors thoroughly outmatched them at every turn.
Questionable deployment, poor defensive coverage, a lack of team speed, and nonexistent rush defence defined the Canucks inaugural playoff run.
The giant financial investment into the club’s roster had many in the industry pegging Abbotsford to be Calder Cup favourites before the season began.
Though there were some bright spots in the playoff performances of Vasily Podkolzin and Spencer Martin, the early exit off back-to-back losses stands as a crushing disappointment.
Before an offseason of finger-pointing can begin, let’s examine the Farm’s final game of their postseason debut and how they blew it.

The decision to roll out the same line combinations after Tuesday’s disastrous result was certainly a choice. Wednesday’s roster did play better than they did Tuesday. Unfortunately, the team’s marginally improved play could not justify some of the baffling roster decisions. Jett Woo playing as a third-line forward during a do-or-die playoff game is inexcusable. Splitting up the team’s best duo in Dries-Rempal made zero sense in game one and even less in game two.

From the opening minute, there were bad vibes about the game. Within the first twenty seconds, a wrist shot rode up Ashton Sautner’s stick, crushing him in the side of his jaw.

Ashton Sautner shot to the face.
The Canuck-luck continued when Philip Broberg drew a roughing minor against Vincent Arseneau that sent the Canucks to a very early penalty kill.
PK1: Dowling, Podkolzin, Juulsen, Stephens
The shorthanded opportunity gave Vasily Podkolzin some first-shift PK time, but he did not look good in the position. Podkolzin looked hesitant to engage as the high point-man of the Canucks PK umbrella, slow on his rotations with the F2 (Dowling), and struggled with tracking the Condors puck movement. Podkolzin nearly had a successful clearance but got stuck on the ice for the entire two-minute kill.

Vasily Podkolzin struggling to keep up on the PK.
The young Russian forward made up for his forgettable PK shift with an impressive breakaway scoring chance that registered the Canucks first shot of the game. Displaying speed, tenacity, vision, and a grade-A follow-up setup for his teammate, Podkolzin’s scoring chance showed all of the traits that make him so intriguing as a prospect. Though the Condors blocked Guillaume Brisebois’ shot attempt, the saucer pass from Podkolzin was beautiful nonetheless!

Podkolzin scoring chance and setup
Before the midway mark, Jett Woo drew an interference penalty against Bakersfield’s Luke Esposito that sent the Canucks powerplay to work.
PP1: Rempal, Rathbone, Petan, Dries, Podkolzin
Again, Vasily Podkolzin made up for his earlier PK blunders by hitting the post after receiving a pass from Sheldon Dries!

Podkolzin hits the post!
PP2: Dowling, Bowey, Lukosevicius, Stevens, Di Giuseppe
The lack of scoring threat was apparent on the Canucks second powerplay unit. Four forwards not known for their goalscoring prowess resulted in sustained offensive zone time but a lack of scoring chances. The Canucks did manage to tie the Condors in shots on goal with their powerplay opportunity.
The Canucks powerplay found more time to work late in the period when Bakersfield’s Filip Berglund went to the box for high-sticking and finally found success.
It only took nine seconds for Abbotsford’s powerplay to finally connect with a goal! It took a brilliant point-shot from Jack Rathbone to find its way past five bodies and a last-second tip from Sheldon Dries to sink one past the heavily screened Stuart Skinner.
1-0 ABBOTSFORD CANUCKS

Late in the period, Bakersfield tried to even things up with two dangerous set-plays, but Spencer Martin did well to turn both aside. After twenty minutes, the Canucks allowed only six shots against, a massive difference from the twenty shots allowed during the first period of Tuesday’s affair.

The second period started with both teams alternating shots on goal. Unlike Tuesday’s matchup, the Canucks did an admirable job of preventing the Condors from setting up an oppressive puck cycle in the d-zone.
Less than five minutes into the second, the Canucks powerplay went to work again after Nic Petan drew an interference penalty against hulking blueliner Vincent Desharnais.
PP1: Rathbone, Petan, Dries, Rempal, Podkolzin
The first unit displayed crisper passing while searching for a quality shooting lane. Unfortunately, selfish play from Sheldon Rempal saw him give the puck away behind Skinner’s net, gifting Bakersfield an easy zone clearance. PP1 did manage to re-enter the zone but lost any momentum generated with their earlier puck movement. PP2 took a spin for the final 40-seconds of the powerplay but failed to generate any dangerous looks.
The Canucks came alive midway through the second, generating multiple dangerous looks while cycling below the goal line.

Dowling backhander on Skinner
The Canucks puck movement looked infinitely better than on Tuesday, with the punt-and-hunt reliance seemingly abandoned in favour of quick passes and controlled entries.

Canucks entry and puck movement
After a TV timeout, the Bakersfield Condors started to turn up the heat on Spencer Martin. After putting themselves offside on an entry attempt, Bakersfield’s Alex Peters fired a shot on Martin after the whistle, sparking a giant scrum between the two teams’ fourth lines. In total, four different skaters took offsetting minor penalties. 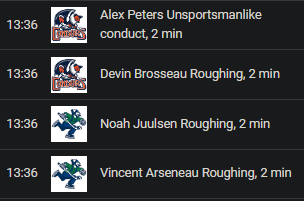 Post-scrum penalties
Shortly after the scrum, Martin was back to making huge saves to maintain the Canucks’ lead. After a d-zone faceoff, Guillaume Brisebois failed to stop a centering pass, allowing Adam Cracknell to fire a shot off of Martin’s pads from point-blank range.

Adam Cracknell’s scoring chance
Vasily Podkolzin displayed more flashes of power-forward brilliance when he cruised down the left wing for a shot off of Skinner’s mask. Sheldon Rempal nearly made it two-nothing for Abbotsford when he picked up Podkolzin’s rebound for a secondary scoring chance.

Podkolzin wires one from the left-wing
The Canucks lead came to a crushing end after Noah Philp turnstiled Madison Bowey inside the d-zone for a shot on Martin. Though Martin was able to make the initial stop on Philp, ex-Canuck Adam Cracknell crashed the crease uncontested for the rebound chance. Bowey and Stephens were solid for Abbotsford during the regular season, but once again, their inability to defend zone entries bit the team badly.
1-1 Tie

After forty minutes of back and forth gameplay, the two squads found themselves perfectly mirrored, tied at one, with twenty-six shots on goal each.

The third period didn’t start too hot for the Canucks, with the Bowey-Stephens pairing handing Bakersfield several shots on goal with multiple unforced giveaways inside the d-zone.
Jack Rathbone, who had been quiet at 5v5 through most of the series against Bakersfield, finally showed off what he’s capable of with a slick end-to-end rush, culminating in a snappy shot on goal.

Rathbone’s end-to-end rush and shot
Five minutes into the third, a shot from Dino Kambeitz deflected off Martin’s glove and into the air, bouncing off Kambeitz’s shoulder and falling into the slot for Brad Malone. While the entire Canucks collective struggled to find the puck, Malone fired a shot past the unsuspecting Spencer Martin to break the tie.
2-1 BAKERSFIELD CONDORS

The tiebreaker goal opened the floodgates for the Condors’ offence. By the midway point of the third, the Condors were dominating with sustained pressure inside the Canucks d-zone, outshooting Abbotsford nine to five.
Fortunately, the ‘little Russian engine that could’ found a way to tie the game at two with a beautiful pass to Sheldon Rempal at the left circle. Not wanting to be upstaged by his fellow Sheldon, Rempal uncorked a bomb of a one-timer that beat Skinner clean over his glove side.
2-2 TIE

With 6:28 left in the third period, Nic Petan took an inexplicable roughing minor to put the Canucks on the penalty kill. The ensuing Condors’ powerplay was chock-full of scoring chances. John Stevens nearly broke the tie early with a shorthanded scoring chance. Adam Cracknell then nearly broke the deadlock in Bakersfield’s favour with a shot off the crossbar. Fortunately, the Canucks PK came up huge again for Abbotsford.

John Stevens’ shorthanded chance
The Condors continued to pressure after the powerplay, and with 1:22 left in the third, Spencer Martin dealt a death blow to the Canucks playoff aspirations. After turning aside a point-shot, Spencer Martin dove onto the uncontrolled rebound to sweep the loose puck away from his crease. Unfortunately, in doing so, he handed the puck to Cooper Marody, who instantly put the puck into the wide-open net. OOF.
WRITERS NOTE: While recapping the game, I missed the kick-pass from James Hamblin that set up Cooper Marody on the game-winning goal. I originally thought that Martin had unintentionally swept the puck over to Marody by attempting a diving cover. I stand by my critique that the rebound off a weak point-shot should never have happened in the first place. Was it a brutal giveaway, no? Was it a bad sequence from Martin? Definitely. We can also squabble about the crosscheck on Jarid Lukosevicius that forced him on top of Spencer Martin. But with Martin’s positioning after the belly-down flop, I find it hard to believe he’d have been able to reset in his crease in time, even without Lukosevicius there.
3-2 BAKERSFIELD CONDORS

After winning the ensuing faceoff, Cull pulled Martin to the bench for the extra attacker.
With eighteen seconds left in the third, Trent Cull used his final timeout to draw up a play. Though the Canucks won the next offensive-zone faceoff, an icing by Bakersfield left them with only 1.5 seconds to score on the following faceoff. And just like that, the Abbotsford Canucks first post-season campaign was over.

Next up on the Docket